Return to the Canyon, part 3: Creepy camp and farewell for now

Hike Mike
3 min read
19 views
No Comments on Return to the Canyon, part 3: Creepy camp and farewell for now

I was on the trail by dawn. Even though I only had a short distance to hike, 6.5 miles, the high winds predicted would not be pleasant on the high, exposed Beamer trail. Early in the morning, the walking was slow but easy, climbing in and out of the side gullies and treading with care on the eroded sections. For the entire hike, I saw nobody.

At Palisades, I knew I had to find someplace sheltered. There wasn't a lot to choose from. A few skimpy bushes and some boulders; nothing looked good. Then I followed a narrow trail into a grove of trees. There was a campsite, obviously used before. The sweltering air barely stirred. This would have to work. 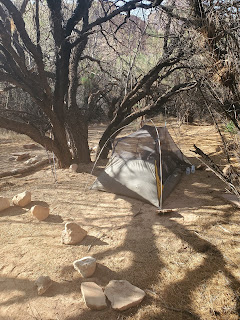 I immediately named it Creepy Camp. Some blood, fairly recently drained from some creature, pooled on a rock. A claustrophobic path led to the river, adding to to the creepiness factor. However, the beach was magnificent, a small slice of sand where I could wade in happily. 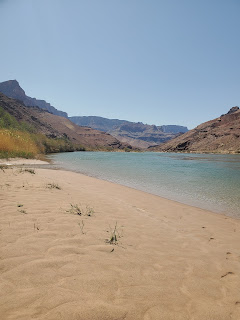 I looked across the river at a beach on the other side. A woman appeared, pacing the sand. There were no boats in sight. Had she been left behind? The roar of Lava Rapids drowned out any attempt at communication, and swimming the river was not an option. I watched for awhile as the woman continued to pace. It seemed like a canyon mystery never to be solved, but then I saw some rafts pull over and pick her up. I found out later that there's a route from the North Rim that comes down there and hikers often hitch rides over to Tanner Beach.

The wind began to blow and I retreated to Creepy Camp. As scary as it was, it had been a good choice. Camping in the sandy sites would have been impossible. 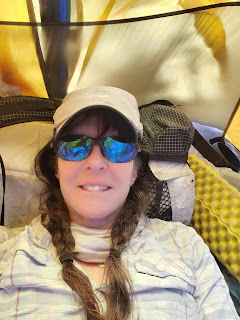 The next morning, unscathed from any creeps, I packed up and headed back to Tanner. Several people were there, with tales of effort and failure in reaching the beach the night before. This theme was repeated as I hiked out. It was clear that some people should not be on this trail and did not know what they were getting into.

I had planned to camp on top of the Redwall, but a strong wind discouraged this notion as did all the people hiking down who planned to camp there. (It was only about 4 groups, but this was way too many for one spot.) Hoping to find something suitable, I poked around 75 Mile Saddle and found an acceptable spot with a great view. My brand new thermarest pad predictably deflated as it had the past several nights (don't buy an Uberlite.). I was only a few miles from the trailhead, but I needed one more night in the canyon.

I gained the top before eight the next morning and pondered my life choices. It seems like I have hiked most of the Canyon trails; there isn't much left to do on this side. Even some of the off-corridor routes are getting busier. Is it time to find somewhere else to go? I don't know. It's hard to give this place up. 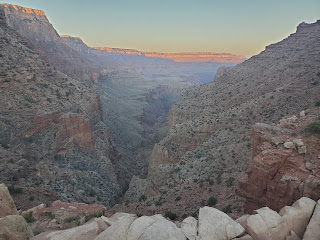