Return to the canyon, part one: to Tanner Beach

Hike Mike
4 min read
3 views
No Comments on Return to the canyon, part one: to Tanner Beach

I sat in idling traffic, feeling more annoyed by the minute. In total, it took three hours to travel the four miles from just outside Tusayan to the entrance gate of Grand Canyon National Park. While admitting that I was part of the problem, I also couldn't believe the traffic jam. In all my years of coming to the Canyon, I have never had to wait to get in. Maybe I've just been lucky.

I had built in an extra day before my permit started in case the flights were weird, so I spent an exorbitant amount of money to stay on the rim. Hiking along the rim trail was also deeply weird. There were more people than usual, and no international travelers. Just white people as far as the eye could see.

I drove to the Tanner trailhead to scope it out so I could leave by dawn the next day. A trio of intrepid explorers were packing to go in. "I've been in the canyon 90 times," one of them felt compelled to say. He also mentioned that the trail I was planning to connect to, the Beamer, had "kicked his butt." I felt more and more nervous. The Park Service's description of the Tanner and Beamer isn't overly welcoming. The words "nasty" and "eroded" feature prominently. Also, a heat wave had descended on the canyon. It was going to be in the high 90s, and one day the winds were going to gust to 35. For Pete's sake, I thought, why am I doing this? Is this really dumb?

My nervousness had reached a high point the next morning as I stepped onto the Tanner, burdened with four liters of water. The sun was just beginning to rise, and it was still cool. Many trip reports bemoaned the first mile and a half, which descend 1800 feet. However, I was relieved to find that it wasn't scary, just painfully slow. There were some scrambles, and careful feet placement was required. 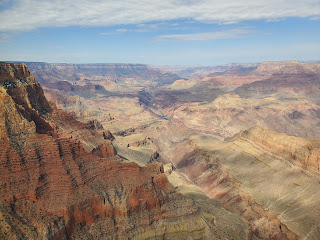 It took an hour and a half to reach the top of the redwall, where the walking became briefly easy before diving down through the sandstone, which was composed of rolling rocks. Still, I was enjoying myself as I came upon a man trudging upwards just past what is ominously named Furnace Flats.

"I'm halfway!" he declared. It was clear that he wasn't even close to halfway, but he insisted, "Look, there's the watchtower! It's really close." He then described how fit he was and that he had hiked nine miles every day of his trip. I left him to his delusions, knowing I was only about an hour to Tanner Beach. A river oarsman on a layover day joined me, hefting a large umbrella. I looked on enviously. I have a trekking umbrella and remain unconvinced of their benefits, since they seem to inhibit airflow, but shade in the Canyon is a wonderful thing. However, I can't seem to find a good attachment to my pack, so I left mine behind. 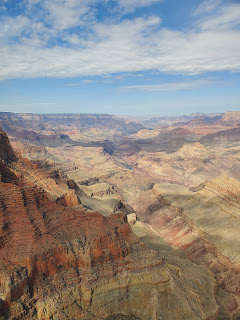 I hit Tanner Beach in less than five hours, and my butt wasn't kicked. It was only eleven, but the temperatures were reaching roasting. I didn't relish the thought of a sandy hike to the next beach, so I decided to swim and read for the rest of the day. I'm not normally good at this, but there's something about the Canyon that invites relaxation. I hurry through life as it is, why not sit still for a while? The water was breathtakingly cold, but refreshing. I saw several rafting trips hurtle through the rapids. 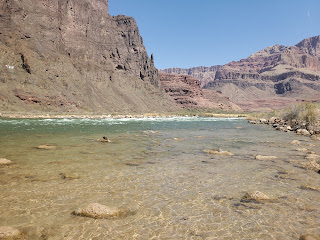 I sat and contemplated my life choices. I had planned to move my camp three miles to Palisades, stay there for the night, and then do the 12 mile day hike to the confluence with the Little Colorado the following day. The high temperatures and predicted wind dictated a change in that plan. I had read that the Beamer had very exposed, narrow sections. A friend in town had claimed that the Beamer had "kicked his butt." That was two reported butt kickings. I was nervous about the following day, but the sound of the rapids and the bright stars drifted me off to sleep. I was back in the Canyon, a place that for whatever reason, seems to be my place. 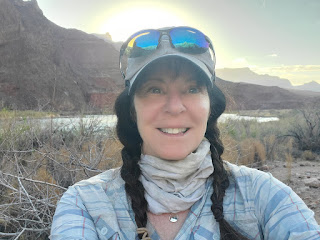