Buy my new novel Take to the Unscathed Road now! Follow me on Facebook, Instagram, and Twitter!
Clouds, ice, snow, water, wind. We had it all on our ascent of the Crockers and Redington. We were the only two people on trail on a less than stellar Monday morning, but it made for a true, wild adventure. 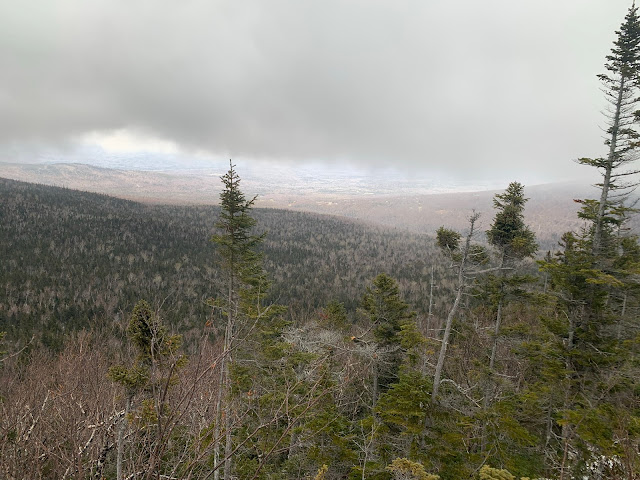 Despite recent trip reports saying the road had washed out, we were able to navigate Caribou Valley Road all the way until the sketchy bridge. We decided to park here and hiked about a half mile to the AT proper. We had no problems getting to the trailhead with the exception of a few raised ruts caused by people driving on the road after the rain storm. 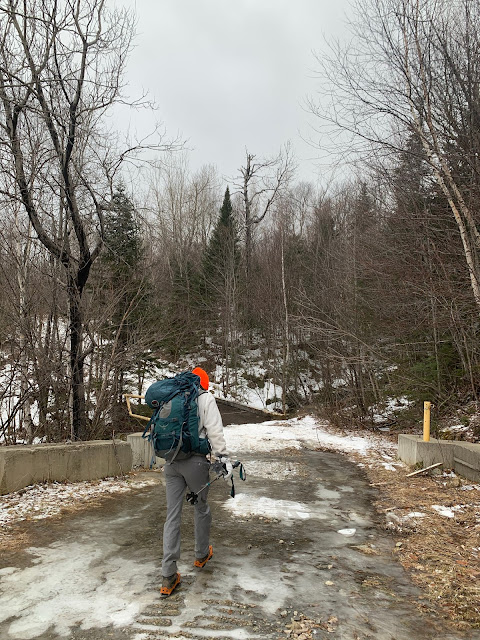 The trail was bare with some patches of ice and a little bit of running water, but after about a half mile it became all snow, and we used microspikes car to car. Because of the running water though, our spikes balled up quite a few times, which isn't the most pleasant thing in the world. 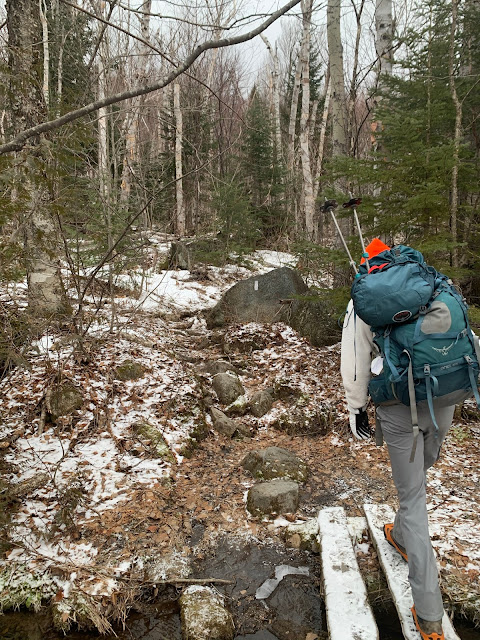 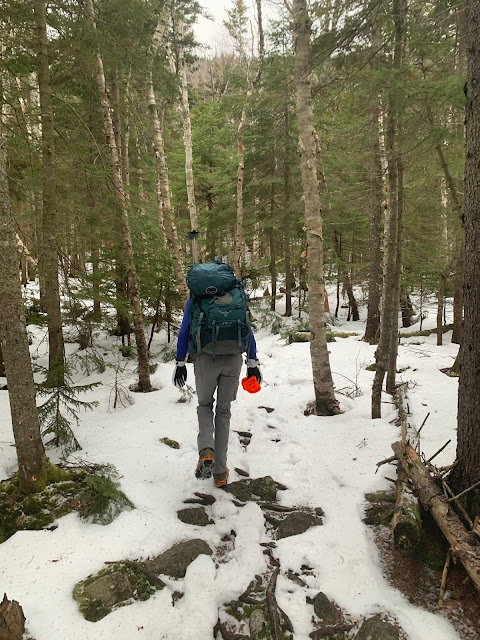 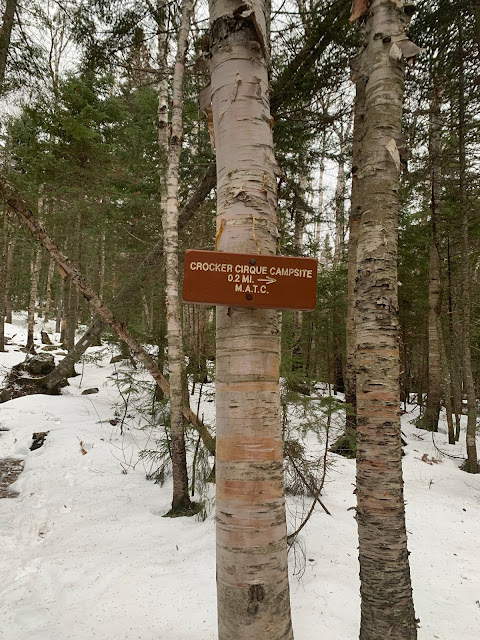 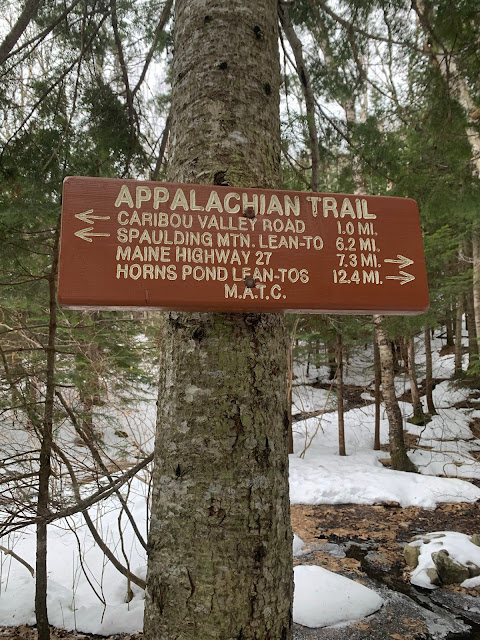 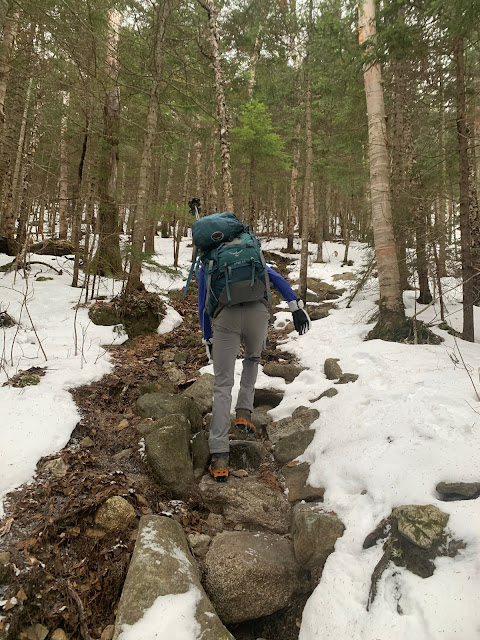 When we reached the boulder field, we had our only views of the day, which can be seen in the first picture of this post. I'm told that there are usually great views heading up this trail, but much of it was obscured by clouds. 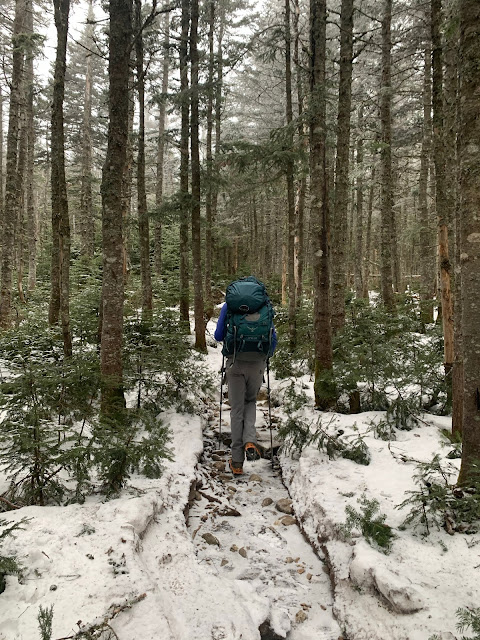 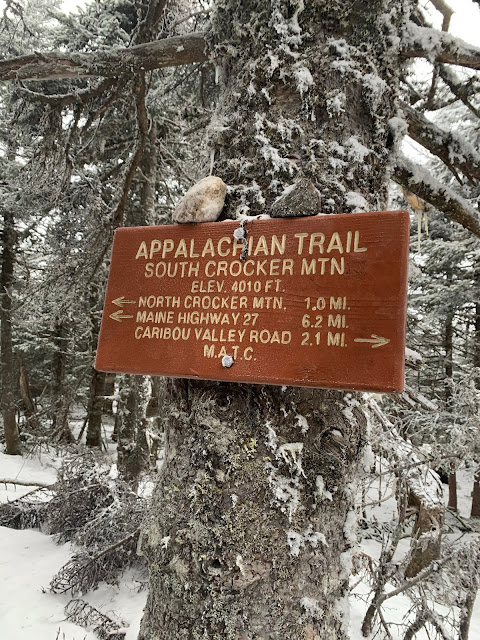 It was quite cold with the wind chill, but we quickly bundled up near the summit, where we soaked in no views. We didn't realize it at the time, but this is where we would begin our traverse over to Redington on the way back. 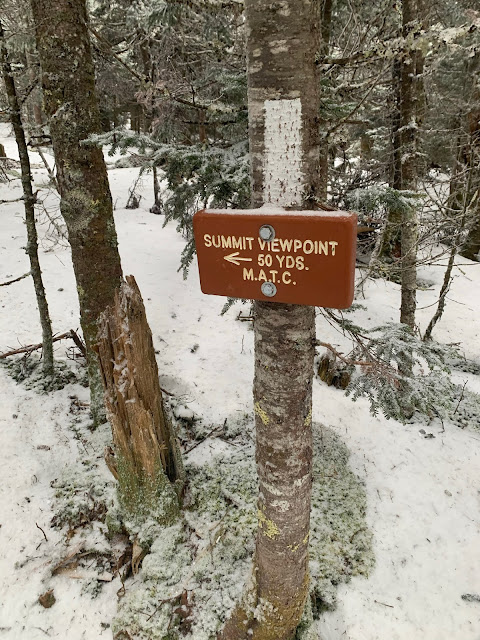 The saddle between the peaks was quite moderate, and we took care of it quickly. If not for the endless layering and delayering, it would have been a much speedier process. This section had a few soft spots so there were a few postholes left behind by us and the previous hikers, but only a few. There's still a good hard pack in the middle of the trail. 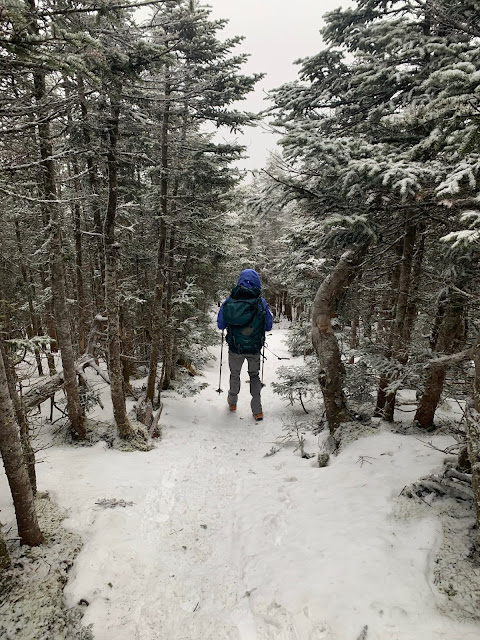 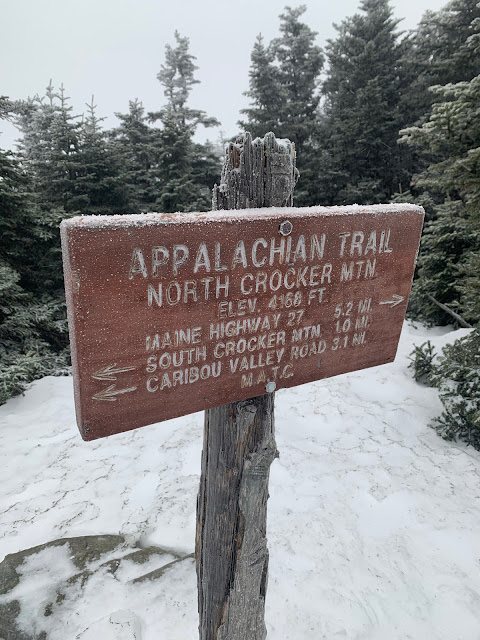 Heading back over to South Crocker, we found the herd path to Redington directly adjacent to the summit viewpoint on the right. It was easy to follow due to the snowshoe/bareboot tracks that were still present. The peaks have gotten a dusting since then, so it may be a bit trickier now. 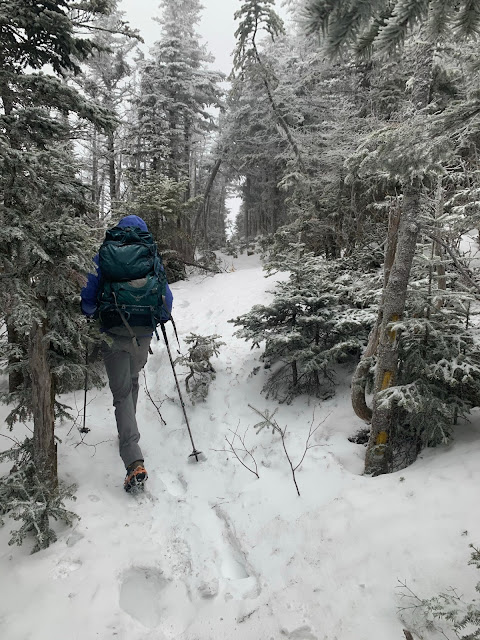 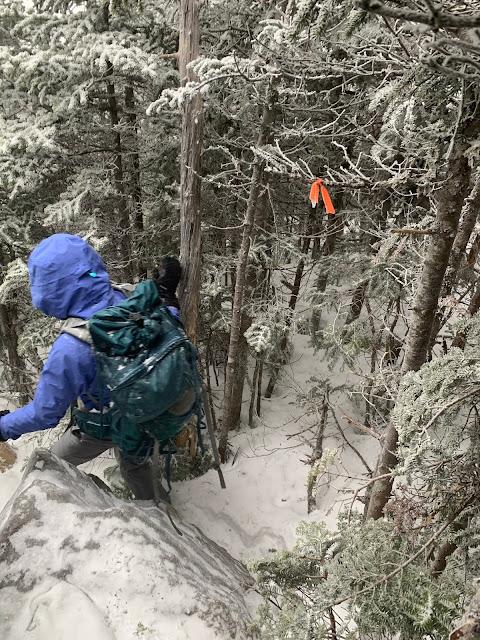 The snowshoe tracks veered off the herd path quite a few times, but we navigated our way quite easily over to Redington. The only tricky part was the turn off from the old "road," but it was marked with a flag and a cairn. 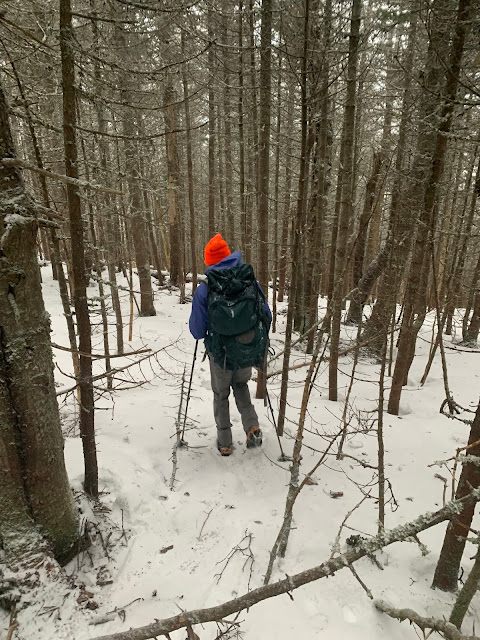 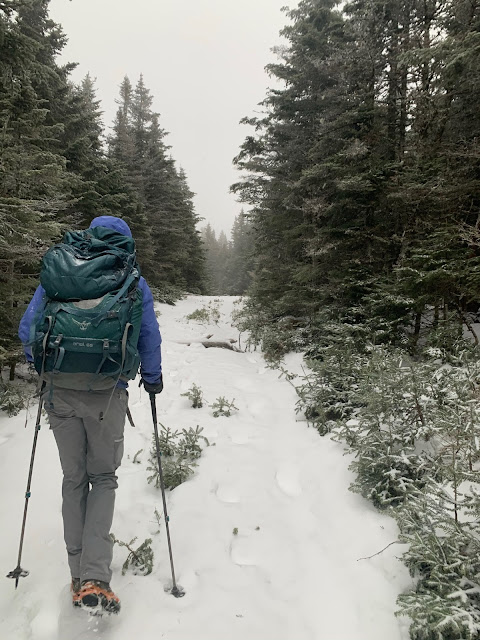 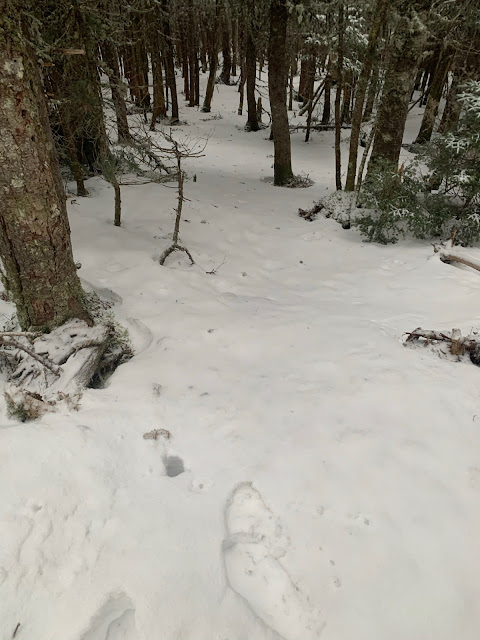 We didn't spend too much time at the top, but located the old canister, and then headed back down to the junction with an ever so faint trail instead of cutting back to the old road. 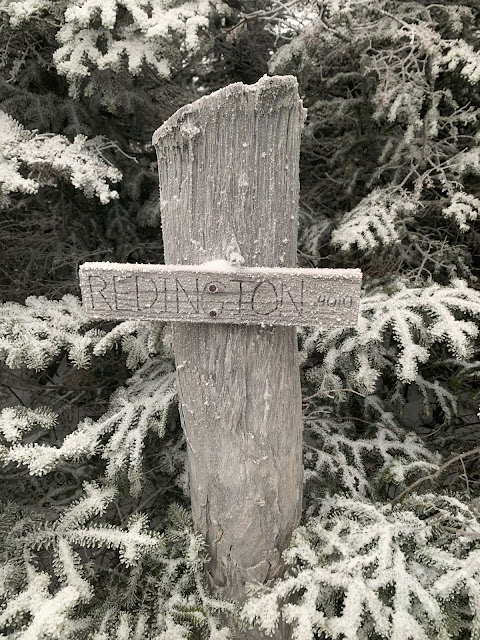 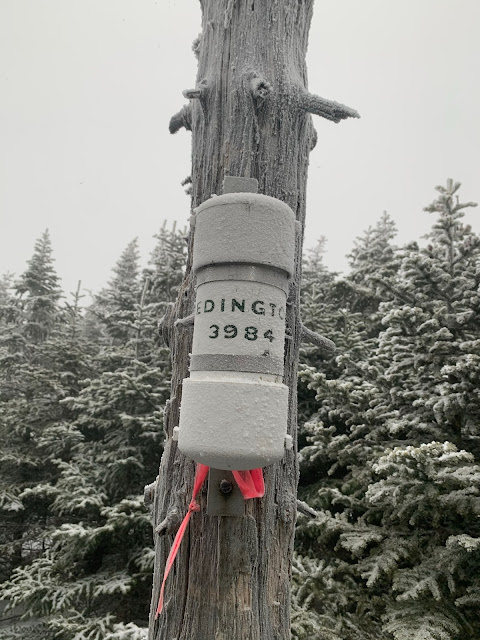 Thankfully for us, we could still see faint snowshoe tracks, though we had a good GPS track of the route as well including my Garmin. This trail we took is commonly used to make a longer loop with Redington without having to go back up South Crocker. In hindsight, it's definitely several miles longer, but there's a lot less aggravation. 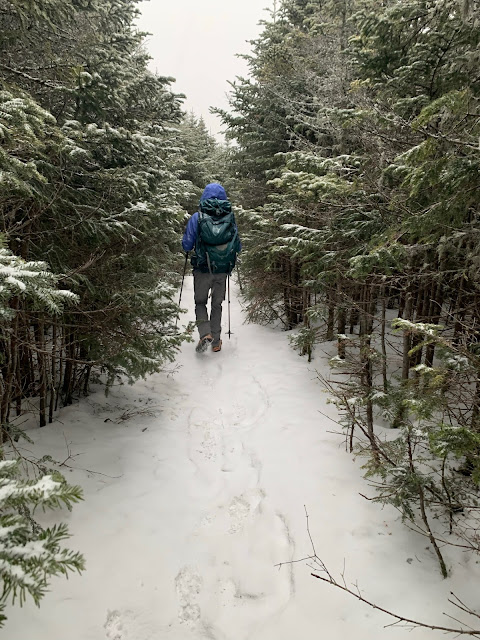 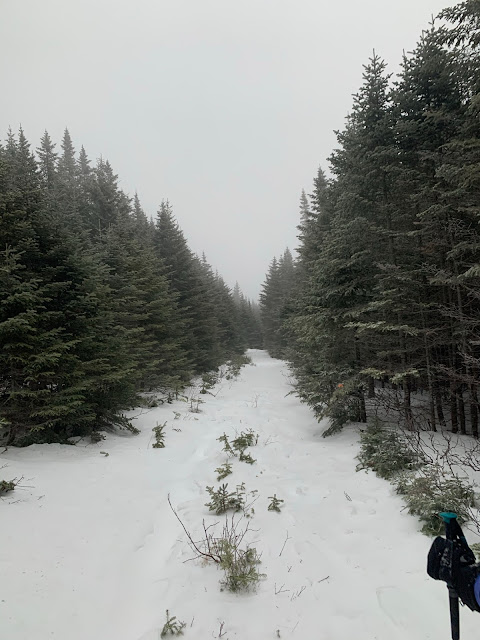 The biggest headache for us was the ice under the snow, since our spikes kept balling up. Otherwise, we would have been going considerably faster. Nonetheless, this was an effortless way to complete the loop down to Caribou Valley Road, where we headed back the 2.5 miles to our car. We used someone's track on All Trails, which I tend not to do, but it was a good description of the loop. There are probably some other logging roads you could use to cut down the mileage, but this was the safest bet without worrying about getting lost. 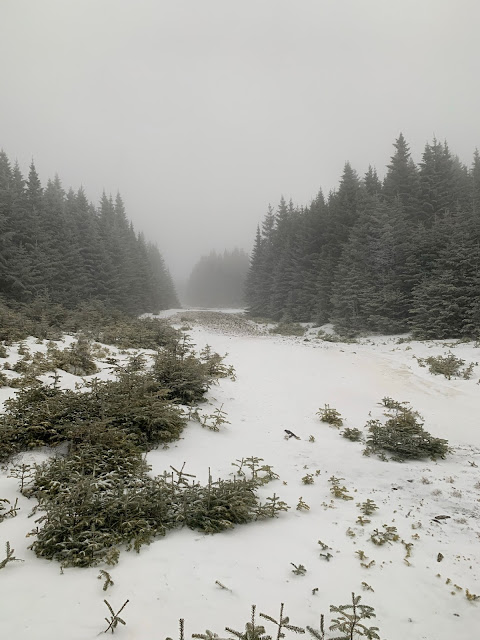 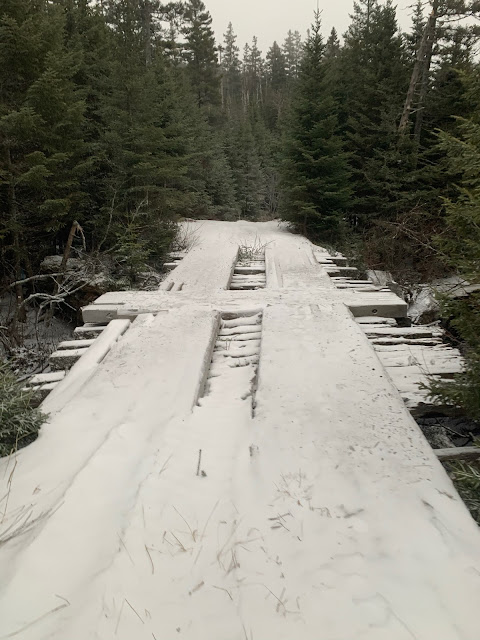 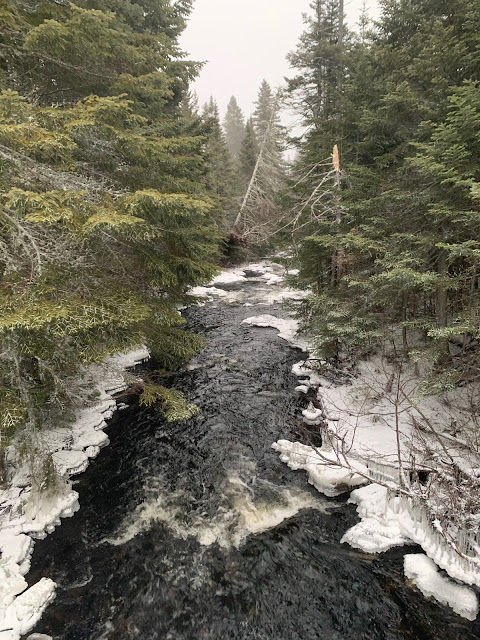 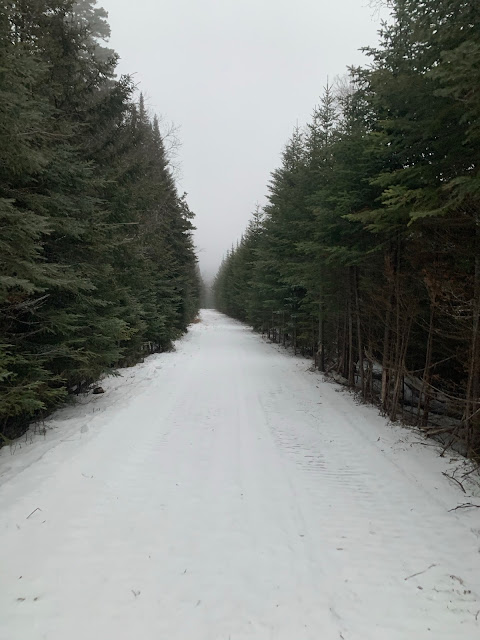 NH4K and 52 With a View: Mount Waumbek and Starr King via Starr King Trail (Winter)