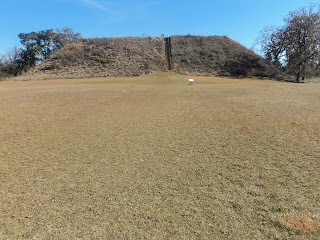 Directions to the trailhead: From the courthouse square in Blakely, head north on Main Street, which becomes First Kolomoki Road after it leaves Blakely. Drive a total of 7 miles from the courthouse square to the signed entrance for Kolomoki Mounds State Park on the right. Turn right to enter the park, stop at the Visitor Center to pay the entrance fee and pick up a trail map, then drive another mile to the Temple Mound and group picnic shelter parking area on the left. Park here.
The hike: Constructed roughly 400 years after the time of Christ but nearly 1000 years before the more famous Ocmulgee mounds up in Macon, Kolomoki mounds represent one of the largest and earliest mound complexes in the southeast. Located just a few miles from the Chattahoochee River in southwest Georgia, the 8 mounds on this site were built by the Swift Creek and Weeden Island cultures, and this site's Temple Mound is the largest temple mound in Georgia. The mounds are labeled A through H, and they show an attention to astronomy: mounds A, D, and E form an east-west axis that aligns with the path of the sun at the spring equinox, while mounds D and F align with the path of the sun on the summer solstice. The Smithsonian Institution did excavations at Kolomoki between 1894 and 1897, and the site was dedicated a National Historical Landmark in 1964. The park's Visitor Center contains an interesting museum that is built around an excavated mound, and the extra museum admission fee is well worth the historical treasures contained therein. The park also features a 24-site developed campground, several picnic areas, two lakes, and four hiking trails totaling nearly 6 miles. The Temple Mound and White Oak Trails explore the site's largest mounds, and they are described here. The park's other two trails explore the park's natural areas, and they are featured in the next hike.

From the parking lot, pick up the signed Temple Mound Trail as it heads west on a wide mowed grass treadway. The trail climbs almost imperceptibly and curves around the south side of the Temple Mound to enter the mound complex's main plaza area. At 0.25 miles, you reach the front of the Temple Mound.

The Temple Mound stands 56 feet above the plaza, and a set of concrete stairs takes you to the top of the mound. The flat area atop the mound measures 325 by 200 feet, and researchers estimate more than 2 million baskets of dirt would have been required to build the mound. Experts think tribal priests would have lived atop this mound, so take a few minutes to soak in the fantastic fit-for-a-priest view that extends in all directions.

Descend the Temple Mound the way you came up, then continue the Temple Mound Trail by walking across the plaza and checking out Mound D. Though only 20 feet high, cone-shaped Mound D is one of the largest and oldest burial mounds in the southeast. Geometrically speaking, Mound D forms the center of the entire mound complex.

The Temple Mound Trail continues past Mound D and leads back to the Visitor Center, but this hike retraces its steps to the Temple Mound and then turns left to begin the White Oak Trail. Marked with green paint blazes, the White Oak Trail quickly passes Mound C, a small mound of unknown function, and heads north into the woods. The dense forest here consists of white oak and pines with some magnolias.

Near 1 mile into the hike, the trail narrows as it curves right to leave an old road. The balance of the hike dips through a couple of ravines and crosses the creeks in these ravines on wooden footbridges. These footbridges had seen their better days on my visit, but they got me across safely. A slight rise deposits you at the group picnic shelter, and your car sits in the parking lot to the right.