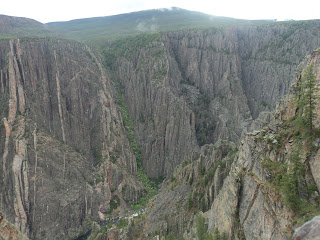 Directions to the trailhead: From Montrose, take US 50 east 7.6 miles to SR 347 and turn left on SR 347. SR 347 dead-ends at the park entrance in 5.2 miles. Enter the park, and follow the main park road to the South Rim Visitor Center, where this hike begins.
The hike: The western United States features many large and famous canyons including Zion Canyon, Bryce Canyon, and of course the largest-of-the-large Grand Canyon, but none of these canyons match the scenic starkness of the Gunnison River's Black Canyon. The igneous rock found under western Colorado's mesas resists erosion, yet for 48 miles the Gunnison River cuts up to 1800 feet into this rock. Moreover, at its narrowest point the canyon at river-level is less than 40 feet wide. The jagged dark rock walls only add to the canyon's intrigue. I had been wanting to come to the Black Canyon for more than 20 years, and my eventual visit on a damp Saturday in late July did not disappoint. The Gunnison River is named for John Gunnison, an explorer and engineer who visited this canyon in 1853. Gunnison was scouting possible railroad routes that would connect St. Louis and San Francisco, but he judged the canyon to be impenetrable by railroad. Indeed, the canyon is difficult to penetrate or cross by almost any means. The canyon came under federal protection with the establishment of Black Canyon of the Gunnison National Monument in 1933, and it was upgraded to national park status in 1999.
The national park offers a Visitor Center on the canyon's more developed south rim and a ranger station on the canyon's more remote north rim, but the south rim is easier to access from nearby towns. Unfortunately, the south rim's hiking options are limited and consist mostly of short nature trails. One of the south rim's better and longer loop hikes is the one on the Uplands and Rim Rock Trails described here. This hike stays on the canyon rim for just under half its distance, and it offers a nice mixture of canyon views and rolling semi-arid terrain that characterizes the canyon's rim.

From the back porch of the South Rim Visitor Center, our hike will start on the gravel trail signed as the Oak Flat Loop, but first take a short side trip down to Gunnison Point for your first fantastic Black Canyon view. Gunnison Point is a railing-protected developed overlook about 20 feet below the canyon rim, and it sits atop a rocky extrusion that juts well out into the canyon. The Gunnison River can be seen from here, but the canyon walls themselves may be of greatest interest. The majority of the rock is a dark igneous rock called gneiss, but notice the streaks of pinkish rock called pegmatite that also appear. Gunnison Point may be my favorite canyon view on this hike, so take some time to observe the canyon's intricate details.

After taking in the view at Gunnison Point, retrace your steps back up to the rim and then turn right to begin the main part of this hike on the Oak Flat Trail. The Oak Flat Trail descends to cross a seasonal stream and quickly arrive at the fork that forms its loop. Angle left to begin heading clockwise around the Oak Flat Loop.

The trail climbs gently over rocky terrain to reach another trail intersection at 0.35 miles. If you want a longer and harder hike, you could continue straight on the Oak Flat Loop Trail, which takes you on a rocky course well below the rim. This hike turns left to leave the Oak Flat Trail and head away from the canyon on the Uplands Trail.
The somewhat narrow Uplands Trail climbs gradually through a semi-arid area dominated by sagebrush and gambel oak. A few rocky areas need to be negotiated, but for the most part the going is fairly easy. At 0.55 miles, you cross the park road at a marked crosswalk and continue the gradual climb.

Near 1 mile into the hike, the trail curves left to cross first the seasonal stream and then the park road again. Now in a dense grove of gambel oak, you reach the highest elevation of the hike and an intersection with the Rim Rock Trail at 1.25 miles. The Uplands Trail ends here, and the Rim Rock Trail goes left and right. The option going right quickly ends at the South Rim Campground, so this hike turns left to begin heading back to the South Rim Visitor Center.

For the rest of the hike the Rim Rock Trail treads through a narrow corridor between the park road on the left and the canyon rim on the right. Canyon views are almost non-stop, and while a few steep and/or rocky sections need to be negotiated, all of these sections are short and quickly yield to dirt/gravel sidehill trail. At 1.7 miles, you pass Tomichi Point, a popular overlook that is also accessible by car. Another 0.3 miles of rim walking returns you to the South Rim Visitor Center to complete the hike. While you are here, the South Rim Road leads to numerous short nature trails that merit your attention, including the Warner Point Trail described in the next hike. Each of these nature trails leads to a slightly different view of fascinating and imposing Black Canyon.