It was Saturday morning again. When my carpool got to the fee booth at Red Rock Canyon at 7:40am, there were two cars in front of us. By 7:50am, there were cars lined up out to SR 159. Our meeting time was 8am at the fee booth parking area located behind the fee booth to the left. Needless to say, some of our hikers were stuck in that line! We waited for those hikers that we could see from the parking lot. Crazy! Hiking is a great form of exercise! And, what better place to hike than Red Rock Canyon! Today's hike for fifteen hikers was a scenic trail that runs along the colorful Calico Hills between the fee booth and Sandstone Quarry. One of the best hikes in Red Rock!

There is a newly erected trail sign next to the newly created rock-lined trail that leads out of the parking lot and across the road. See the third photo. Finding the trail across the road, we started up.

It was a beautiful day. Clear blue sky with little puffy and refreshing breezes. The first mile of the hike led us up to the Calico I turnout off of the Scenic Loop.

This mile of the trail has recently been refurbished. It looks very nice and is cleared of extraneous rocks. When we reached Calico I, we took a long break at the restroom facility. (I hear that it was quite a stinky break! Only one of the restrooms was usable. But, I digress.) While we were waiting, we talked to an old friend, Roger H. He was there to take photos of a large group of volunteers for the Make a Difference Day. These volunteers were painting a coat of sealer on the wooden fences that were added with the new turnout construction at Calico I, Sandstone Quarry, and Pine Creek. Thanks to them from all of us! When everyone returned from the restroom, we bid Roger adieu and hiked down the hill to the Calico Hills / Grand Circle Loop trail. At the wash, we turned up to the right and climbed the next hill up to the upper route. This route is the original Grand Circle Loop. Later, the loop was streamlined to the lower and easier route that we would take on the return. As we followed the route that dips back down to the wash in a scramble, we picked up "Oregon Lady" who decided to follow us through the maze. She appreciated our guidance!

There are huge cairns, as seen in the photo above, but the route is … unusual. And, fun! So, we got down to the wash and followed our old route along the sandstone slab.

We came to another hiker who wanted to know about the loop route over Angel Pass. I gave him some general directions since he appeared to be able and up to the task.

Choosing not to follow the trail up and around beneath Calico II, we stayed in the wash and hiked through the pleasant shade rejoining the trail at the landmark dead tree. (See the 8th photo down for this wash/trail junction on the return.) The next point of interest are the trailside petroglyphs next to a humongous square boulder and other large square boulders. The petroglyphs seem to be in fairly good condition at this time. (These petroglyphs are routinely defaced with graffiti. Kids never change, huh?) From there, the wide angle views of the Calico Hill walls continue. We began seeing a few rock climbers approaching their challenge for the day.

There are a couple of spots on the trail where we had to use the good soles of our hiking boots to climb steep sandstone slabs that are already worn from thousands (maybe millions) of hiker feet.

The morning light lent itself to the views in front of us. However, the views of the hikers behind me were a little more tricky to photograph! Nevertheless, "Oh, What a Beautiful Morning!"

We reached Sandstone Quarry and the parking lot was already full to capacity. There was also an ambulance that was staged there. Hmm. We hiked over to the shaded slot entrance for our break. During the break, some of us climbed up into the slot and found two rock climbers doing their thing in the very cool shade. A restroom at the Sandstone Quarry trailhead was also visited during our lengthy break as we watched the cars pour in and try without luck to find a place to park. Finally, we rose to start our descent back to the cars. Our route back was exactly the same except for taking the lower (newer) route after hiking back through the shady wash. We hummed along at a decent speed stopping occasionally to check on everyone and regather.

There were more hikers out and about. And, we saw several rock climbing groups on the Calico walls hanging from strings like marionettes. (See 4th photo below!)

Autumn colors sprouted up around us in the form of matchweed, or broom snakeweed mostly. (Can you believe that some states try to eradicate this plant as an invasive weed?) Well, I like it!

We climbed back up to Calico I and noticed that the wooden fence was all shiny and new! We wondered how the volunteers found parking spots at Sandstone Quarry to continue their work. We ambled down the last section of the Calico Hills Trail until we reached the fee booth parking lot. The line to get past the fee booth was still crazy out to 159. But, our fifteen hikers had beat the crowd and enjoyed a wonderful morning on the trails. Fantastic group of friends today!
6 miles; 1150 feet elevation gain; 3.25 hours; average moving speed 1.9 mph 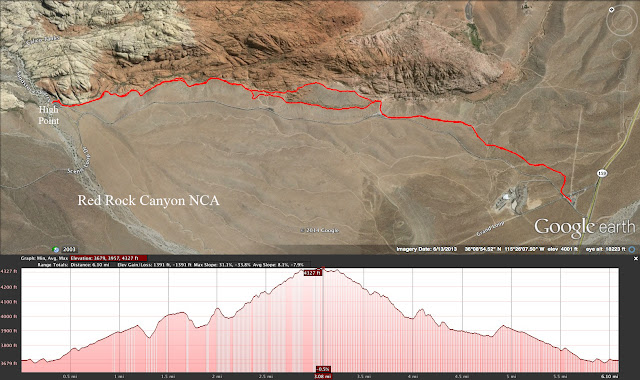 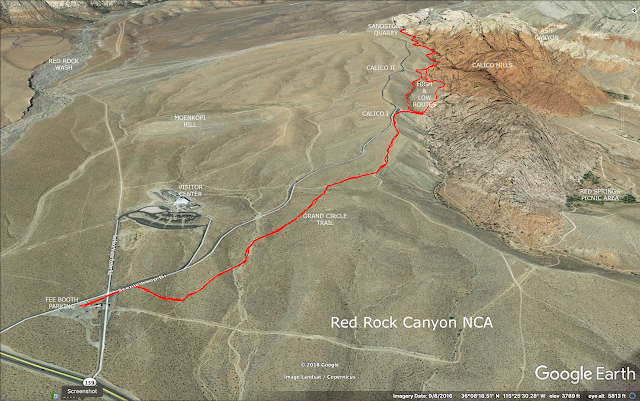 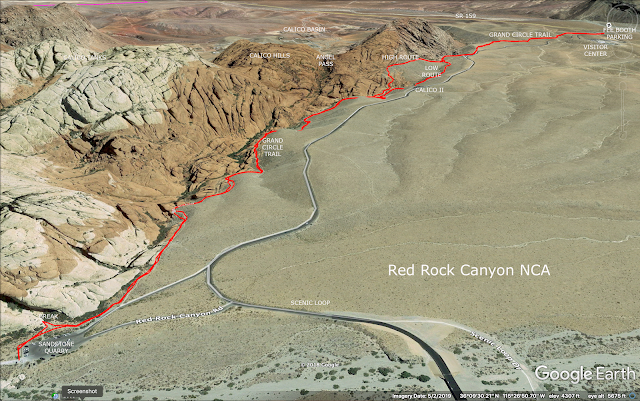