I asked four different people.
"I have a painting class."
"I'm going to a bike race."
"I'm in Portland."
"I'm on the coast."
I have an adventurous set of friends. Not one of them were home sitting on the couch. I think of friendships as circles on a dart board: you have the close ones, the ones you can count on. Then on outer rings, you have the ones who occasionally show up due to other obligations, then the ones who show up when the adventure sounds good enough to justify it, and then finally the ones who vaguely say that they want to go, and to keep asking them, but never actually go. Then there's the ones who don't like dogs, or whose dogs don't get along with others, and the ones who won't drive because you are bringing your dog, and so on. You almost need a spreadsheet.

I wasn't going to sit around because nobody could join me on my 12 mile hike, so I packed up the dog and took off. The hike up to Aneroid Lake is never assured: I have had to turn back due to avalanche, deep snow, and once, lack of snacks. So I never count on actually getting there. Today, it was perfect; the fall I never thought we would get, and an empty trail. The slog, littered with boulders and ice, wasn't easy, but it never is. Just one foot in front of the other for six miles.
Almost empty trail. I encountered a backpacking couple coming down and asked them about the snow. Perhaps foolishly, I had worn trail runners. "I made it in Vans!" the man said. The other family coming down, swathed in puffy jackets, said there was a "fair bit of snow." You can't always take what other people say to be true. Some snow appeared, but nothing too deep. Before long I had arrived.

I often avoid this lake because it's just not as great as some of the others. The water access is problematic, involving a scramble, and people often perch their tents in the few nice resting spots. It's hemmed in, without some of the grand views that you can get at other lakes. But today, it was a lake transformed, with a greenish tint to the water, nobody around, and just enough snow that you knew winter would soon close it off for good. It was perfect.
I have to admit I am sometimes on the other end of the invite. It's common for me to say things like, "I'm in Minnesota." Fortunately, my friends at the center of the dartboard keep asking–and I will too. Until then I will continue my solo adventures. I'm glad I'm not afraid to go it alone. 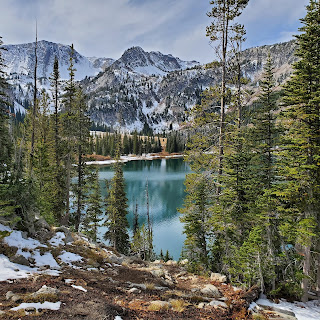