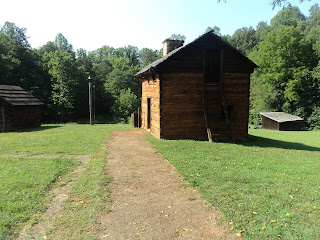 Directions to the trailhead: From Rocky Mount, take SR 122 north/east 15 miles to the monument entrance on the right. Park in either of the small paved parking lots near the Visitor Center.
The hike: Perhaps no life exemplifies the challenges faced and determination exhibited by African-Americans in the late 1800’s and early 1900’s than the life of Booker T. Washington. Born a slave on a tobacco plantation in about 1856 (slaves had no calendars to mark birthdays), Washington later wrote that the first time he realized he was a slave was when he was “awakened by my mother…kneeling over me…praying…that some day she and her children might be free.” That freedom came when he was about 9 years old, but by the late 1800’s new oppression had risen in the form of disenfranchisement and Jim Crow laws. In the face of that oppression, Booker T. Washington became the dominant leader in the African-American community by championing education and entrepreneurship. On point, Washington founded both the National Negro Business League and the Tuskegee Institute. Through these institutions, Washington established a political and social coalition of middle-class blacks, church leaders, and white philanthropists that he led until his death in 1915. Today the grounds on which Booker T. Washington was born are preserved as Booker T. Washington National Monument, which was established in 1956 as the first national monument named after a person. The Visitor Center features an informative and inspiring video about Washington’s life, and two trails form end-to-end loops around the grounds. This hike uses both of the monument’s trails to form a grand tour of all the monument has to offer.

Walk out the back door of the Visitor Center and follow the asphalt trail that heads first east and then south through a sunny mowed-grass area toward the reconstructed plantation. Where the asphalt ends and the trail splits to form the Plantation Loop, choose the option on the right to pass beside the reconstructed slave cabin where Washington lived. Next you pass the reconstructed smokehouse before descending steeply and entering the woods.

After a brief stint in the woods, you reach the reconstructed tobacco barn and a trail intersection. The other arm of the Plantation Trail goes left, and we will go that way eventually. To also hike the Jack-O-Lantern Branch Trail, angle right and begin heading downstream on a wide two-track dirt trail with Jack-O-Lantern Branch on your left.

Tiny Jack-O-Lantern Branch is rockier and livelier than you might expect for a stream in this part of Virginia, and it even features a couple of small cascades. The riparian forest is a dense mixture of oak, red cedar, sycamore, and black walnut. Some numbered signs indicate the existence of an interpretive brochure, but the Visitor Center did not have one when I inquired. At 0.5 miles, the Jack-O-Lantern Branch Trail splits to form its loop. To follow the numbered signs in increasing order, I continued straight here and used the right trail as my return route, thus hiking the loop clockwise. A gradual descent ensues with Jack-O-Lantern Branch keeping you constant company.

Just shy of 1 mile, the trail curves right and climbs slightly to reach the short-cut trail, which exits right. Angle left and descend again to stay on the outer-most loop. Soon Gills Creek comes in sight on your left; Gills Creek is much larger than Jack-O-Lantern Branch. At 1.1 miles, the trail curves right and begins a moderate climb away from Gills Creek. The difference between maximum and minimum elevations on this hike is only about 120 feet, but you gain most of that elevation in only 0.2 miles on this climb. Where the short-cut trail rejoins from the right, look to the right for an old cemetery.