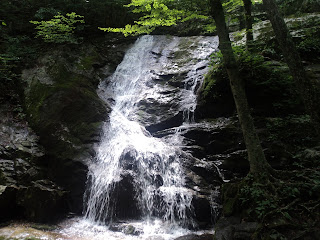 Directions to the trailhead: From the intersection of US 29 and SR 56, take SR 56 west 16.8 miles to the signed national forest entrance for Crabtree Falls on the left. Alternatively, reach this point by taking SR 56 east 6.4 miles from the Blue Ridge Parkway. Pay the small entrance fee and park in either the upper or lower parking lots.
The hike: The Appalachian Mountains have many waterfalls named Crabtree Falls, but none of them match the size and scale of the Crabtree Falls in Nelson County, Virginia. This Crabtree Falls drops 1200 feet over 5 major cascades, and it tumbles down the south side of the deep and steep ravine that contains the South Fork of the Tye River. Taken together as a single water feature, the 5 cascades form the tallest waterfall in Virginia and maybe the tallest waterfall in the entire eastern United States depending on how you group other sequences of cascades on a common watercourse. Crabtree Falls is the centerpiece of George Washington National Forest’s Crabtree Falls Recreation Area, and the national forest’s Crabtree Falls Trail follows Crabtree Creek for 2.7 miles. The lower-most 1.7 of those miles climb beside Crabtree Falls, offering fantastic views of all 5 cascades. Doing those 1.7 miles as an out-and-back forms the 3.4 mile hike described here. Note that Crabtree Falls is located fairly high in its watershed, so you need to come after a good rain to see the falls in their full glory. I have been here twice, once in April 2003 and again in August 2019, and I had a nice hike and visit each time.

The Crabtree Falls Trail starts at the rear of the upper parking area. A sign for the Crabtree Falls Trail, a large information kiosk, and some benches mark the trailhead. The first 500 feet are paved with asphalt, and the trail is wide enough and the grade gradual enough to allow wheelchairs and strollers access to the lowest cascade. A small pioneer cemetery protected by a wooden fence is passed on the left less than 200 feet from the trailhead.

At 0.1 miles, the asphalt ends where you reach Crabtree Falls’ lower-most cascade. This bottom cascade drops about 30 feet down a bare rock outcrop that features a lot of algae. Several people have fallen to their deaths by climbing on the waterfall and slipping on the algae, so be sure to stay behind erected barriers. A dense forest consisting of oak, tulip poplar, and a few pine trees makes for a cool, dark, and damp setting.

The dirt trail now begins the long series of switchbacks that climb alongside Crabtree Falls. The east end of each switchback brings you back to the falls, and a new cascade seems to be seen with every switchback. The second cascade features more boulders than the first, and some constructions such as steep wooden and stone steps aid the climb in several places. Wooden mileposts appear at 0.1 mile intervals, and they simultaneously push you on by telling you how far you have come and warn you about how far you still have to go. Pace yourself and feel free to turn around if your stamina wanes: the old motto “climbing up is optional but climbing down is mandatory” applies on this hike.

Continuing to climb the switchbacks, the third time you get back to the waterfall brings you to a bench that provides your first north-facing view across the Tye River ravine. Crabtree Falls is a tall sheer cascade here. The trail climbs beside the waterfall for a few hundred feet as it passes a small rocky cave. Adventurous hikers can climb through the cave and re-emerge on the trail a few feet higher.

More switchbacks lift you further up the hillside, and as you approach the rim of the ravine the understory becomes denser with ferns and stinging nettle. On my visit some monarch butterflies were fluttering around some yellow violets that were in bloom, and I watched a blue-trailed skink dart beside the trail. I also paused while a timber rattlesnake crossed my path, and I looked carefully to make sure it had no cousins nearby before I proceeded.

At 1.4 miles, you reach the base of the upper-most cascade. Another drop over bare rock, this cascade may be the tallest of the five cascades that comprise Crabtree Falls, and it is definitely the brightest: the large bare rock outcrop allows plenty of sunlight to strike the water. A sign tells you that this is the last waterfall view, and some people turn around here. However, climbing for another 0.3 miles not only leads to the top of the falls but also to a fantastic view.

A final long switchback lifts you to the top of Crabtree Falls, where you reach a trail intersection. The Crabtree Falls Trail turns right to continue a more gradual but less developed climb along the west bank of Crabtree Creek, but you want to turn left and cross Crabtree Creek on a wooden footbridge to quickly arrive at the top-of-the-waterfall view. A bench and overlook provide a fantastic northwest-facing view up the heavily forested Tye River ravine toward the crest of the Blue Ridge Mountains. After taking in the view, you can extend your hike by continuing up the less developed portion of the Crabtree Falls Trail, but eventually you will have to retrace your steps back down to the parking lot to complete the hike.

Do you know how Climate Change is affecting the Himalayas?