The only time my friend had even been high on Sunshine was to downhill ski many moons ago. She had no idea what it looked like on top of the world during the dog days of summer. She's busy, I'm busy, living the life of retirement complicates things a little bit with trying to find a free day for both of us that we can share. Today worked to hit a hiking trail! Sunshine Meadows it would be, a way up high where you can almost touch the sky! 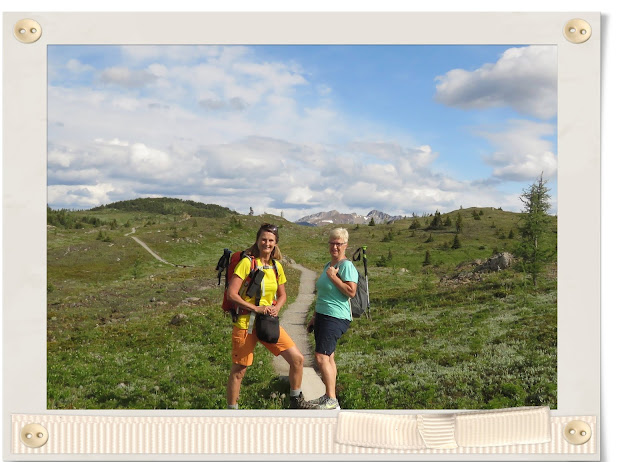 The first part of the journey was aboard the gondola. Next we transferred from the gondola to the chairlift. 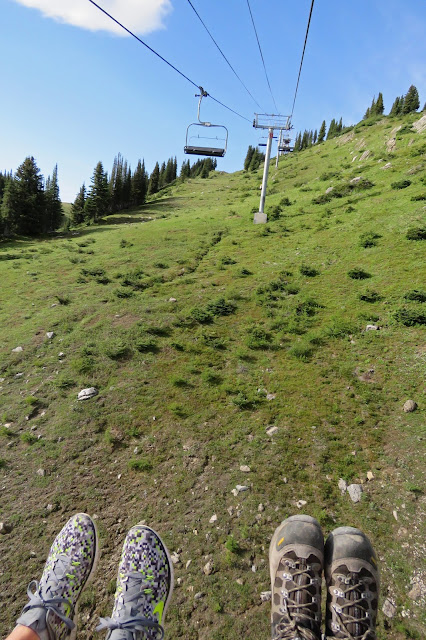 the view down to Sunshine Village behind us 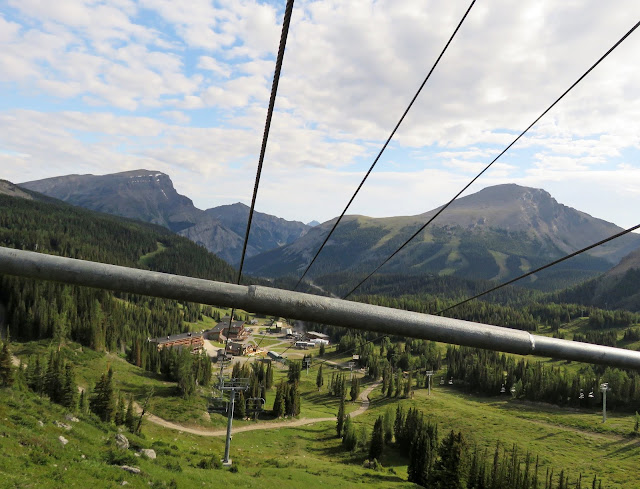 We arrived at the top of the world and then we stepped off it to begin our hike. 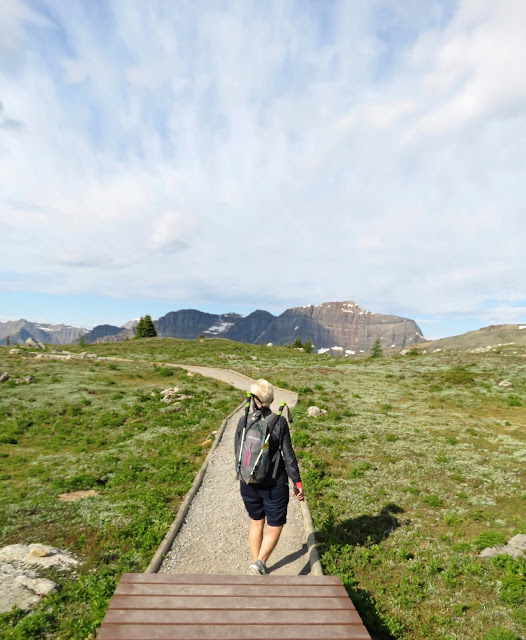 Right in front of us was The Monarch.It was difficult to capture a photo without wildflowers!But why would you want to do that anyway? 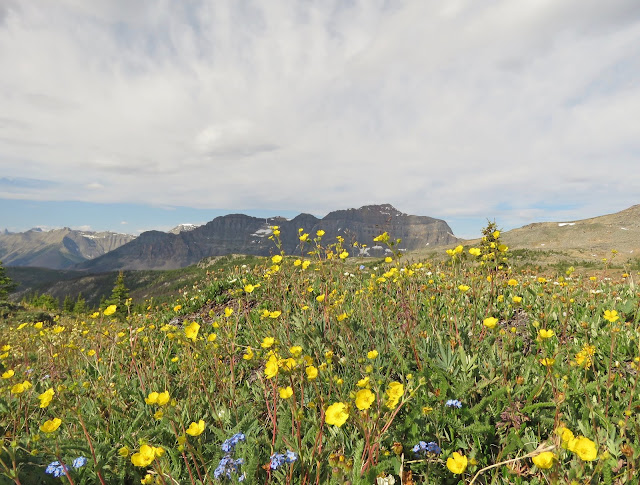 We hiked down to the Standish Viewpoint. From here you can see forever. That's Rock Isle, Grizzly & Laryx Lakes down below. 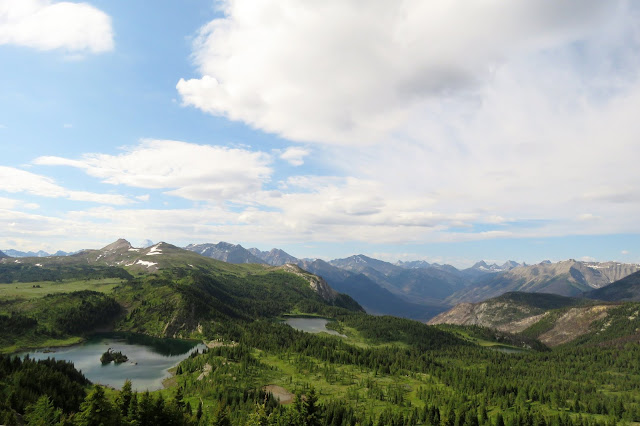 Mount Assiniboine in the middle 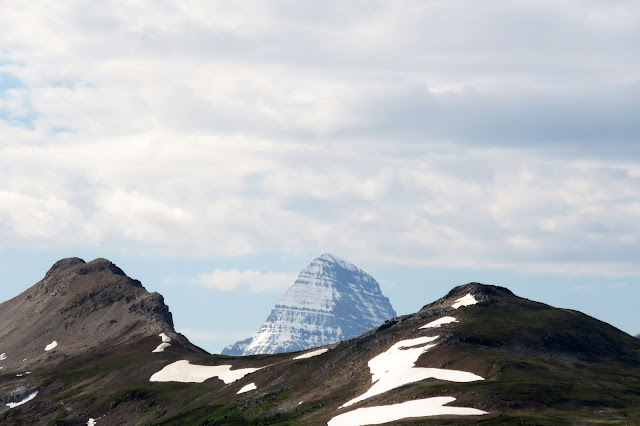 on the Standish Viewpoint balcony 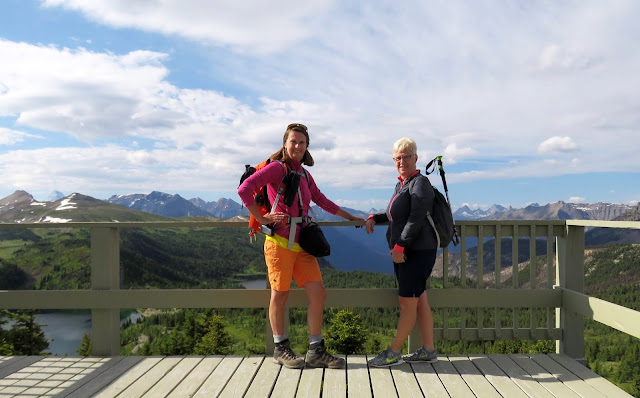 What a wildflower season it has been so far and it continues. 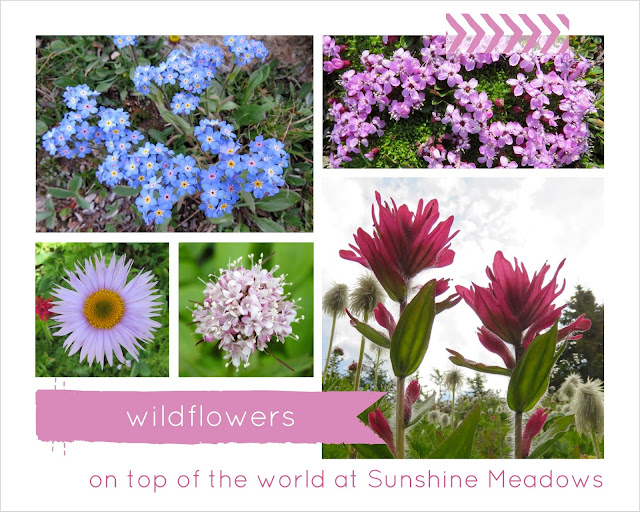 We made a plan to attack. First we would head out to the Monarch Viewpoint where it was wide open and we could easily monitor our surroundings. The two grizzlies are still hanging around. Over the past two days, one was at Twin Cairns area which is right here in this photo and the other one was over by Laryx Lake. There were not near as many people around this early as I had expected there to be, so we opted to wait until later before venturing down towards the more secluded lakes area. 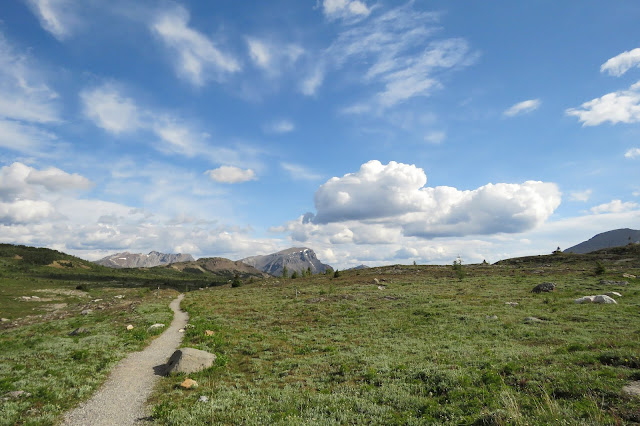 along the Twin Cairns to Monarch Lookout Trail 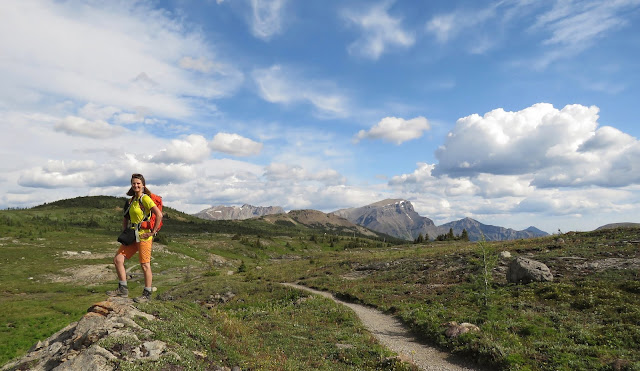 Those that previously worked together now play together. 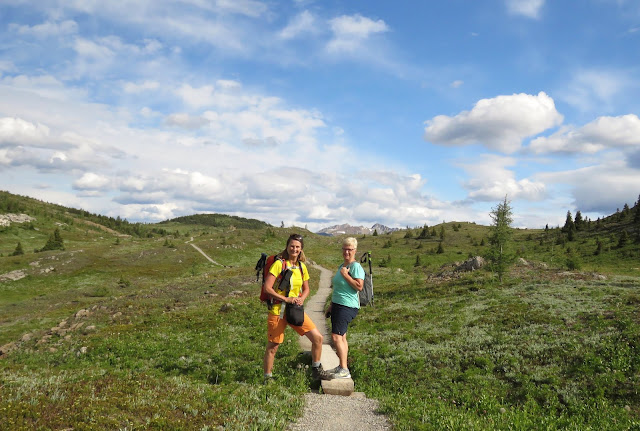 flowers, mountains, cloudsOh to be walking on Sunshine! 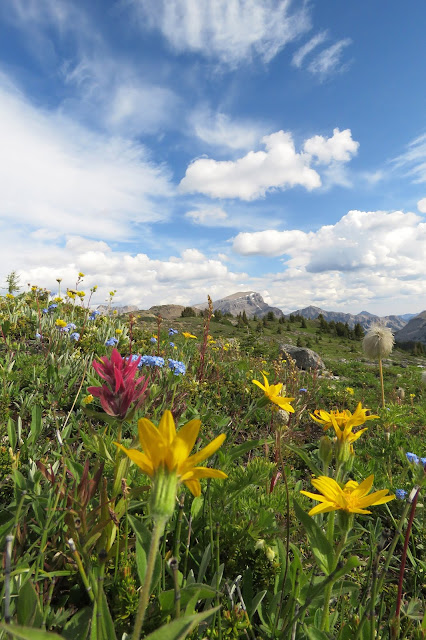 along the trailhippies on a stick and paintbrushes 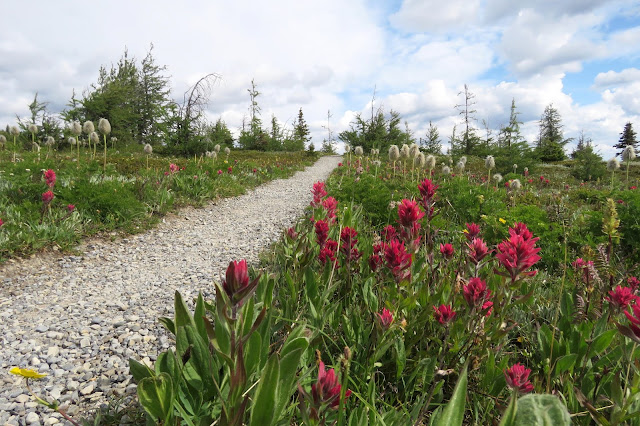 We reached The Monarch Viewpoint and took a break to admire the beauty, have a snack and chat it up with some of the Tuesday's Seniors. You can see them in the middle to the right making their way down to Simpson Pass. Their plan was to then head on up to Healy Pass then hike back down to the parking lot. I knew two of them. They motor like there is no tomorrow! 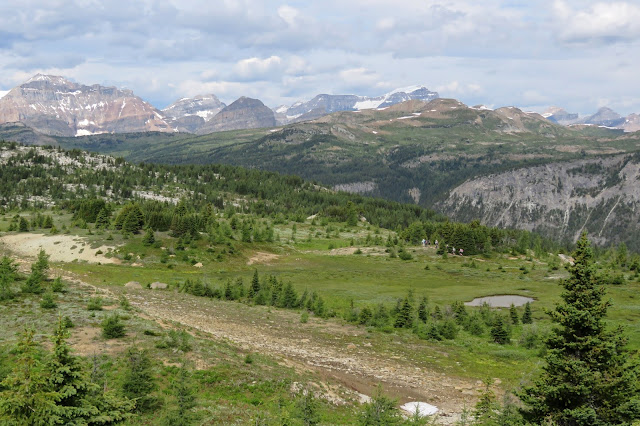 more hippies on a stick getting it on with the paintbrushes 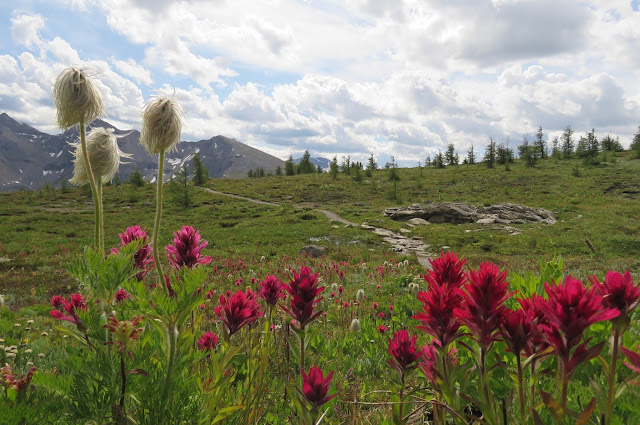 It was now time to head on down to do the loop around the lakes. There were a few more people now and we thought no grizzly in its right mind would venture onto the trail with these hikers. This is a view of Rock Isle Lake as we began the loop. 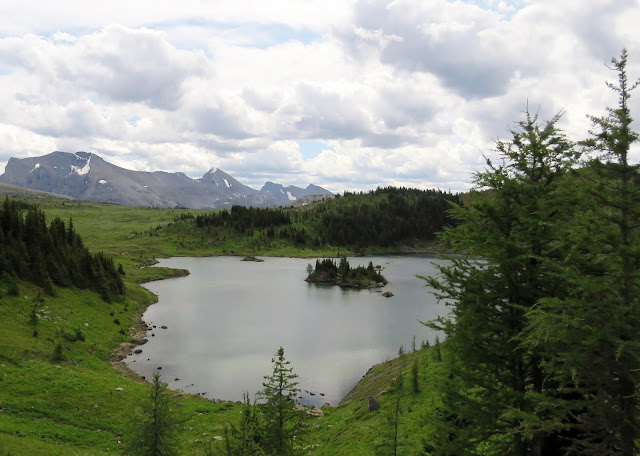 more paintbrush plantsthey were as prime as could be 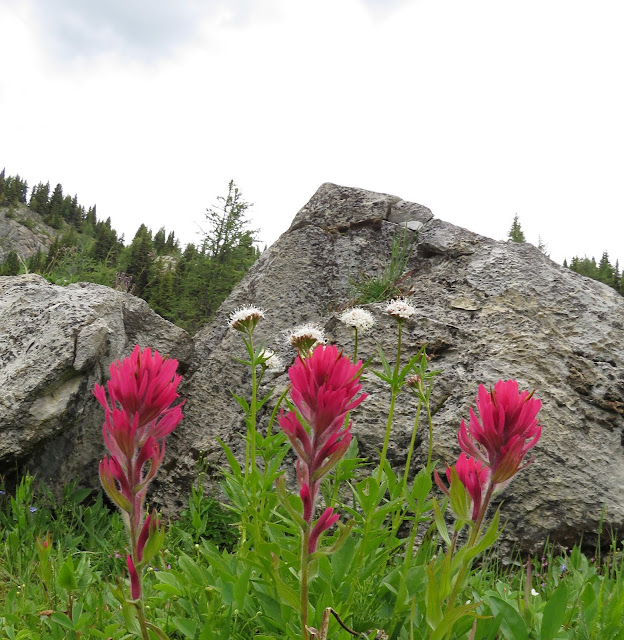 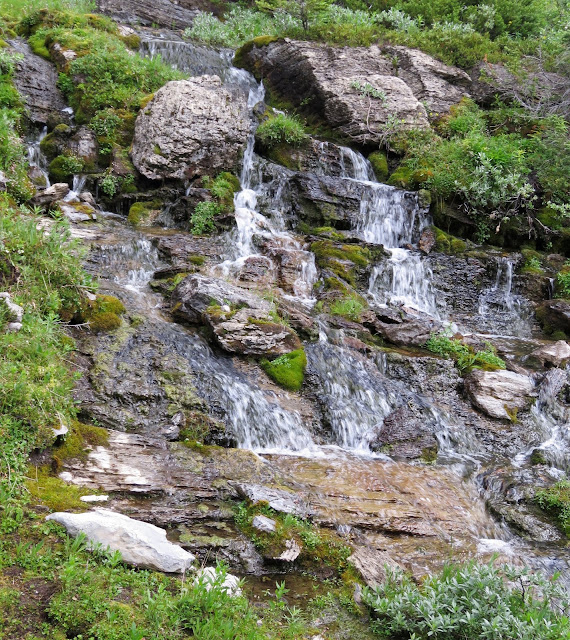 We hiked around Grizzly Lake and then worked our way towards Laryx Lake. We were warmed one of the bears was over here. We had no bear sightings but we did see the biggest mess of bear scat right in the center of the trail. We guesstimated it to be about a day or two old. 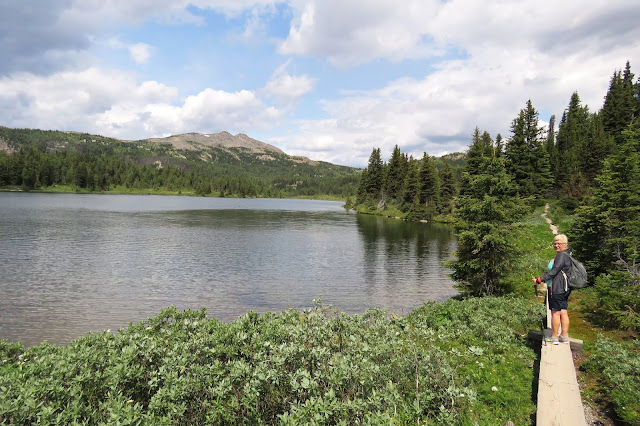 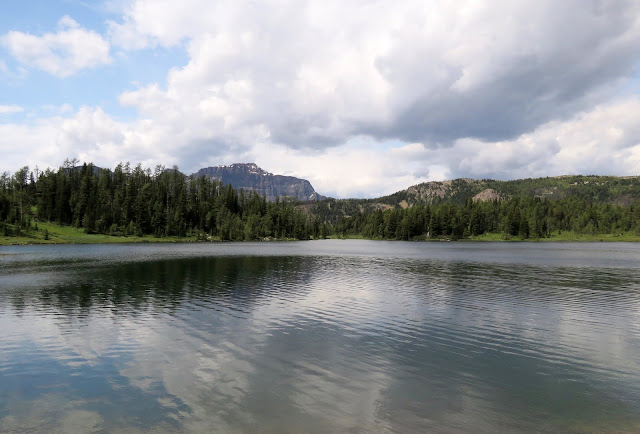 along the Laryx Lake trail 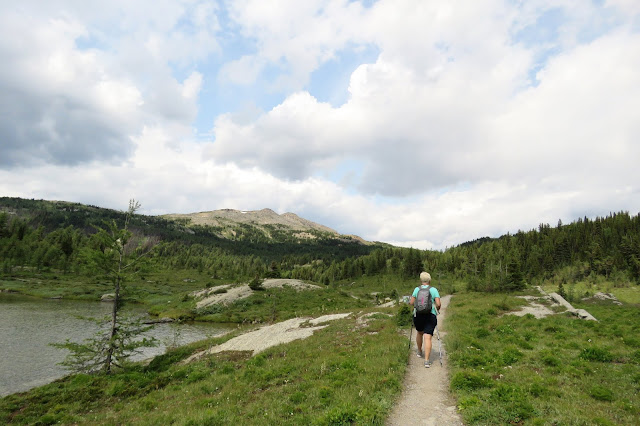 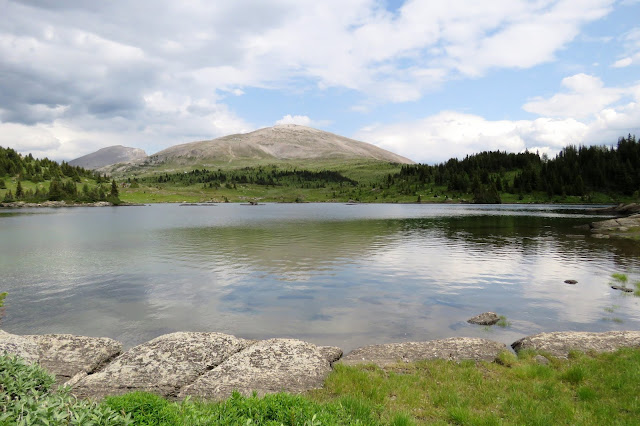 We completed the loop of the lakes and hiked our way up and out of that area. Not being ready to leave the top of the world yet, we settled into the Adirondack chairs and just lazed for about a half hour. My friend suggested we go for dinner in Canmore so I jumped at that idea and said let's go right now. So we did! This is the view in front of us from the gondola ride down. 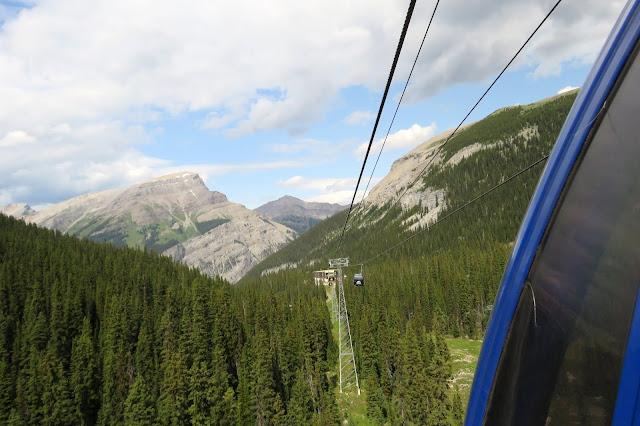 We savourved a beer, steak, a walk and chocolate to top off our day spent up on top of the world! 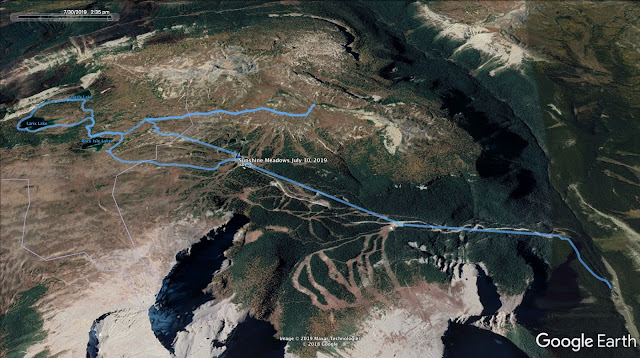 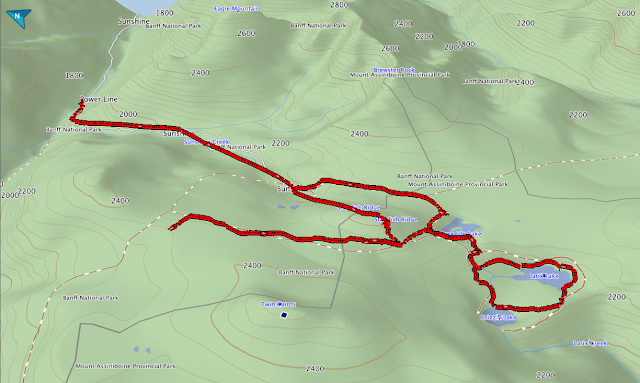