The stars were aligning nicely weather-wise for a hike today out to Citadel Pass. There were positive points that were making this an ideal place to venture to on a mid summer's Sunday. There was no doubt I would get a parking spot without having to leave the city at an inhumane time. There would be many others along this trail for safety reasons but not near the hoards there would be at other places. It's a healthy use of $40.00 for an adult Albertan to ride the Gondola up to Sunshine Village. I knew the views and the experience for this hike would be amazing!

It was a quick and smooth sail west to the parking lot at the base of Sunshine Village. As you can see from the clock I had loads of time to spare seeing as the first gondola leaves at 8:00am. I purchased my ticket and then chowed down on my banana and peanut butter sandwich. Then it was time to board my ride. 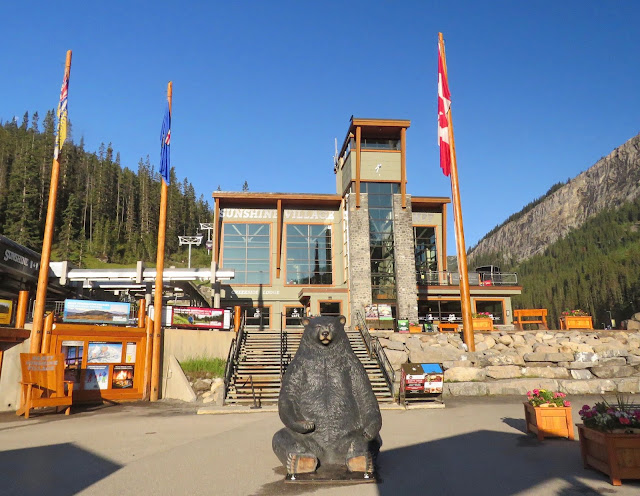 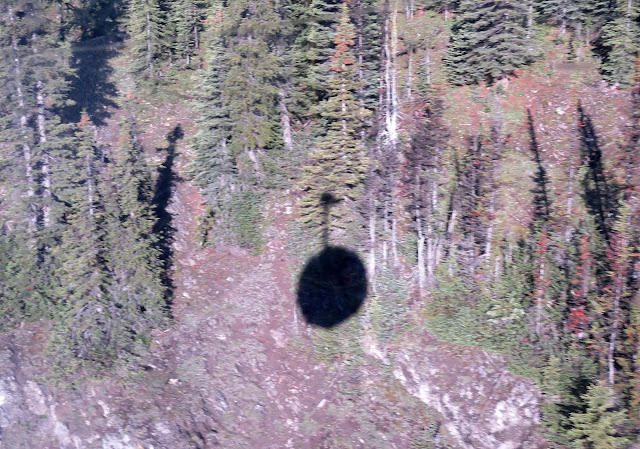 It was hotter at the top then it was down below. At 8:30am when I began hiking I was already down to a short sleeve shirt and was wishing I did not second guess myself, I should have worn shorts. I chatted with the two guys up ahead in the photo. Their destination hike for today was The Nub! You can see the tip of Mount Assiniboine in the photo left of Quartz Hill, well The Nub is out there. They were prepared for about a 50km day knowing they would be hiking down the dirt road in the dark. 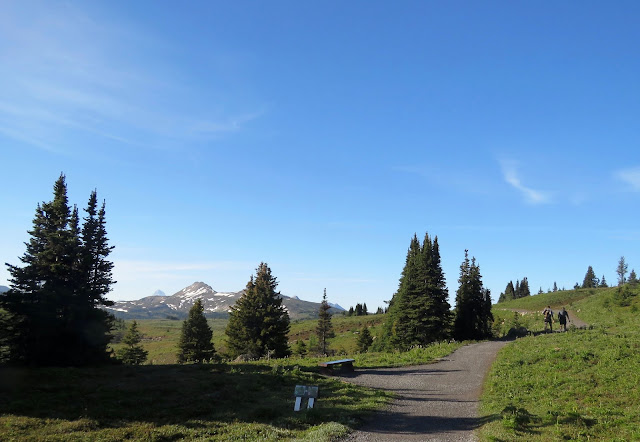 Citadel Pass 7.8 kms from here and that is where I am going! 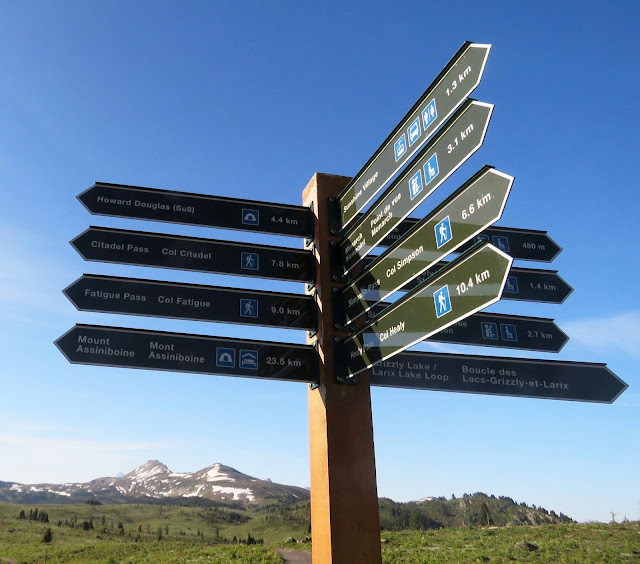 Rock Isle Lake to my right 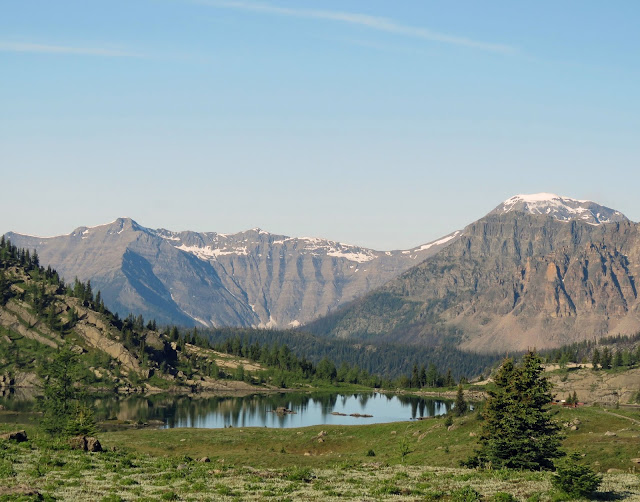 So, when I purchased my ticket they told me about the bear activity over the past two days at Sunshine Meadows in the Twin Cairns area. Two grizzlies were fighting over the territory. Twin cairns was off in the other direction. Well, not long after passing the view to Rock Isle Lake I came upon these two diggings. They were recent, as in this seasons collection, as in this months collection, as in the past few days. With hikers in front of me and backpackers behind me I still kept a close watch of my surroundings. 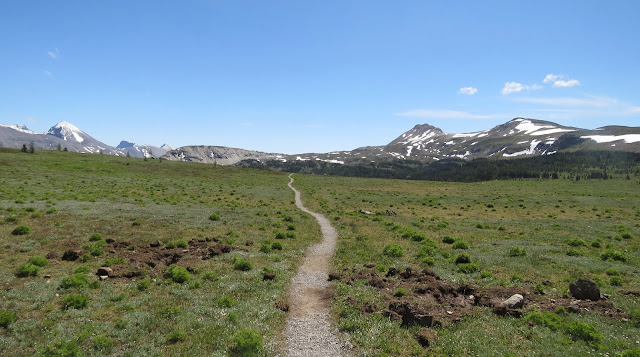 paintbrushes were pretty and plentiful 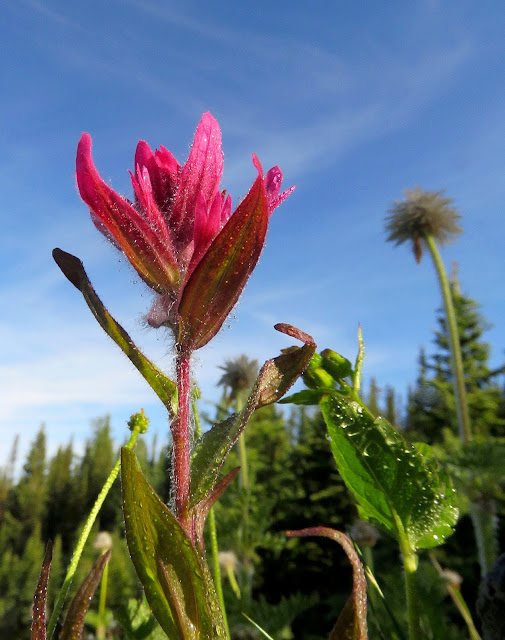 I made it up to Quartz Ridge. 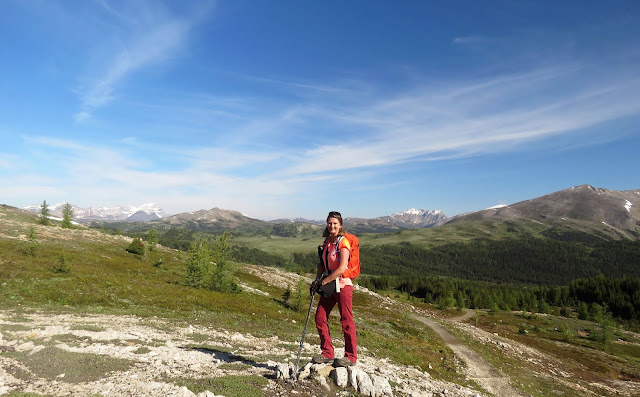 Onward I went from the Ridge to where I had a view of Mount Assiniboine off to the right, Citadel Peak right in there big & brown and Howard Douglas Lake down below. On the way down I began meeting backpackers coming up. I said it's a hot climb up. They welcomed it! They said it's been wet and cold the past days out in Assiniboine area. I could tell it had been as the steep hike down to the Lake was wet, muddy and slippery and in parts there were streams of water running down the trail. 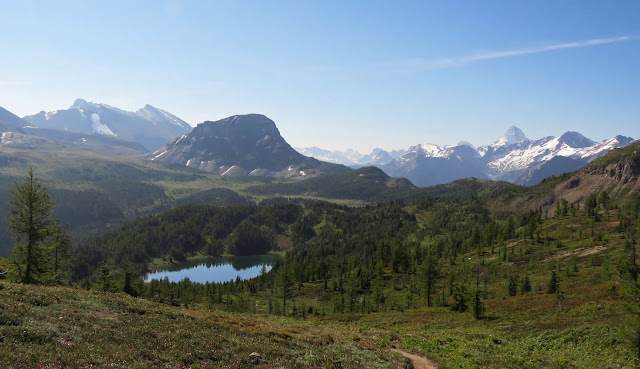 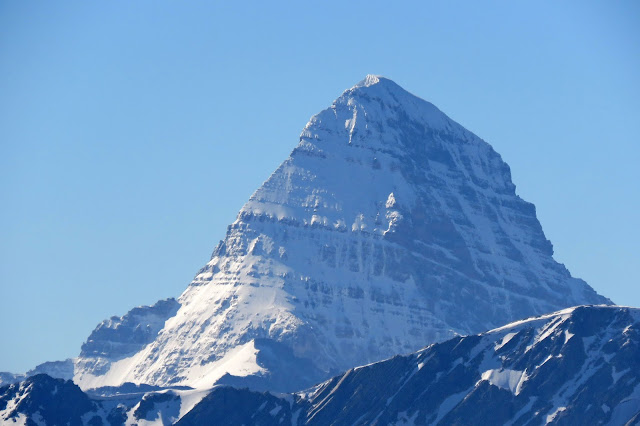 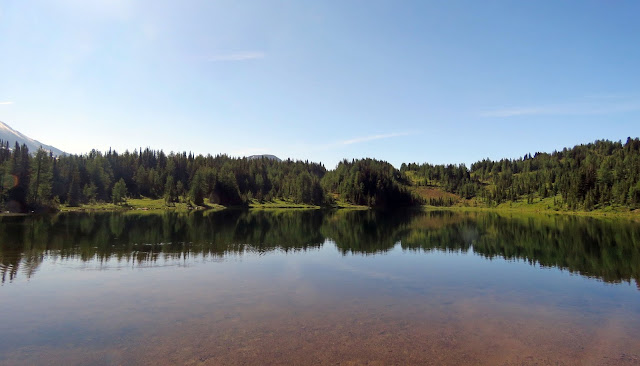 Mount Assiniboine between the trees 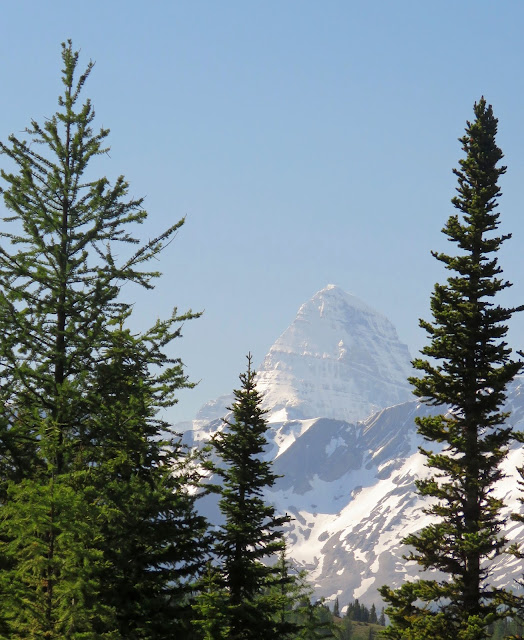 I reached the wide open meadow which is my favourite area along this route. 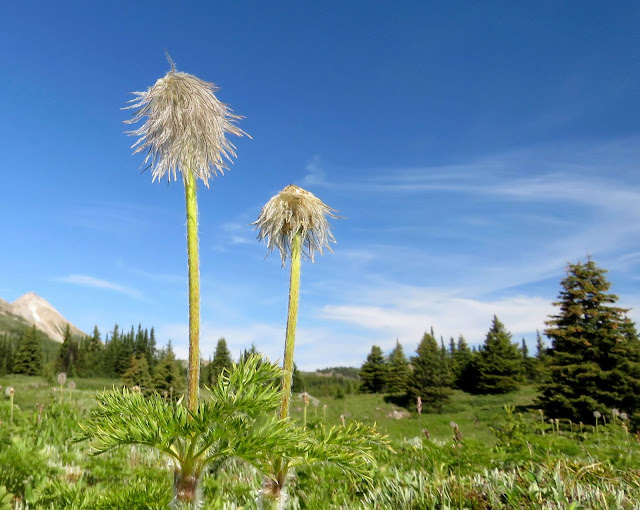 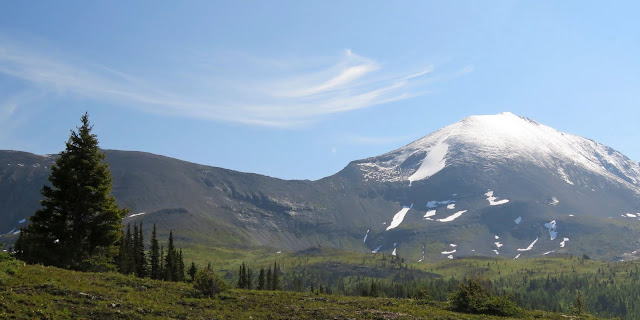 Citadel Lake at the base of Citadel Peak 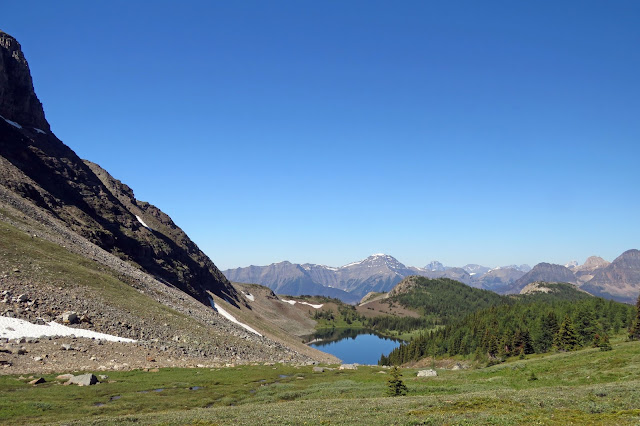 I made it to Citadel Pass. 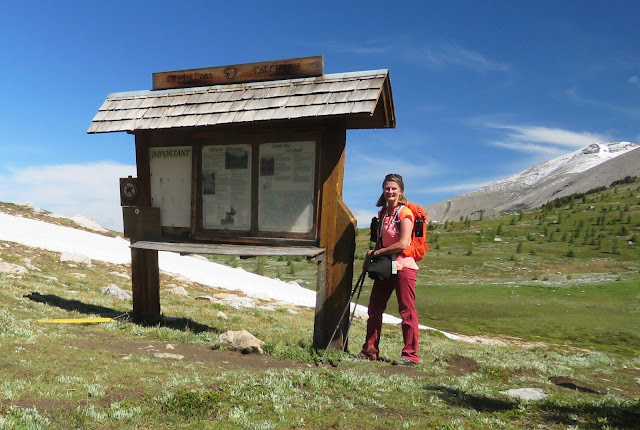 There was a good amount of snow still here, enough so that I had to make the best of it. It was refreshing to be in it, on it and under it. The temperature was sweltering and this was a great cool down. I am just proving here that in the Rockies, there can be a snowfall in mid July! 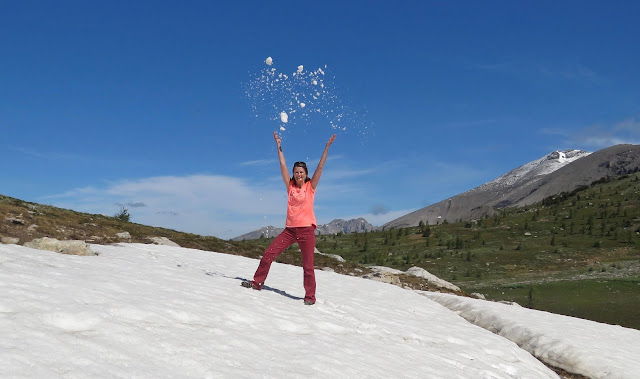 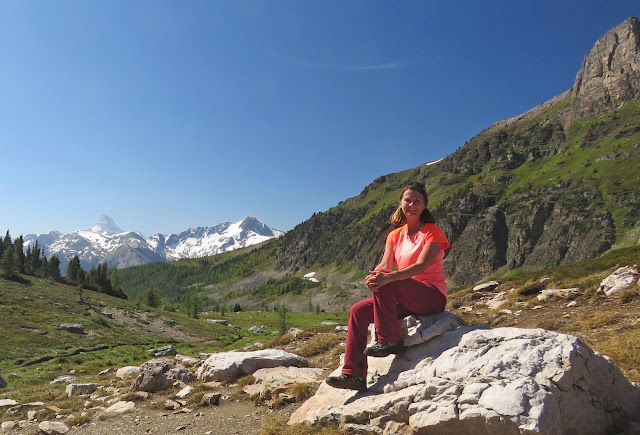 I carried on up the trail towards Fatigue Pass. The route was obvious with lots of cairns and a worn trail. I reached the meadow just below the Pass and I could see the switchbacks up to the top. Time-wise and distance-wise it would have been doable but I opted out as the trail was muddy, sloppy, slippery and I was not comfortable heading up there. I picked this as my lunch spot instead. 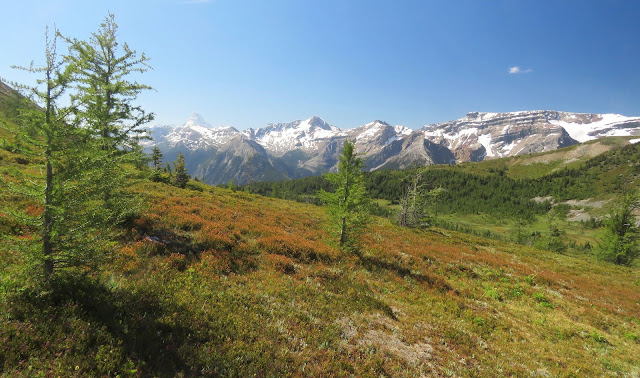 Back down at Citadel Pass there were many hikers and backpackers coming and going. We shared pleasantries. I spotted a ptarmigan and pointed it out to the others. She watched us like she had an eagle eye and was quite vocal. 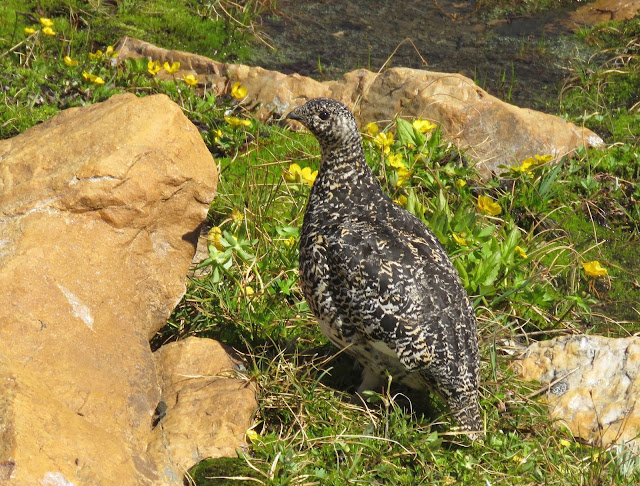 Her babies were running all over the place. I spotted five. They would not stay still long enough to capture a clear photo.This was the best I could get. 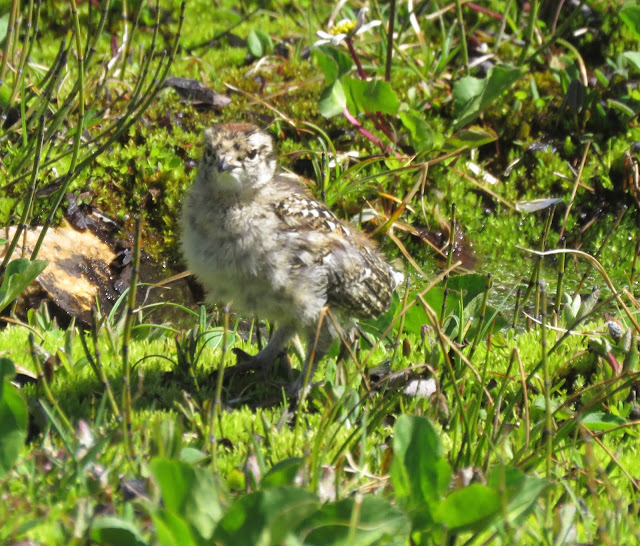 The meadows were full of paintbrushes. This means it is summer in the meadows. Yet the mountain peaks were covered with a fresh layer of snow. 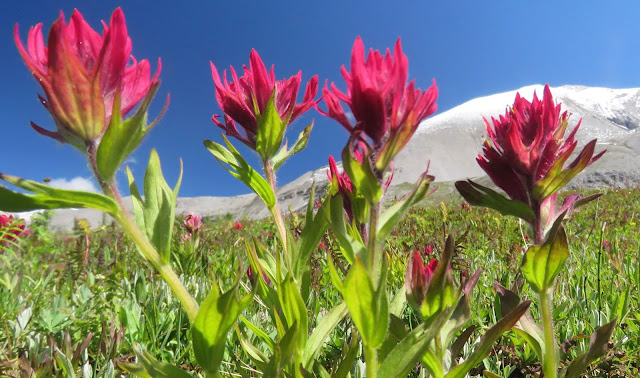 view along the trail on the way back 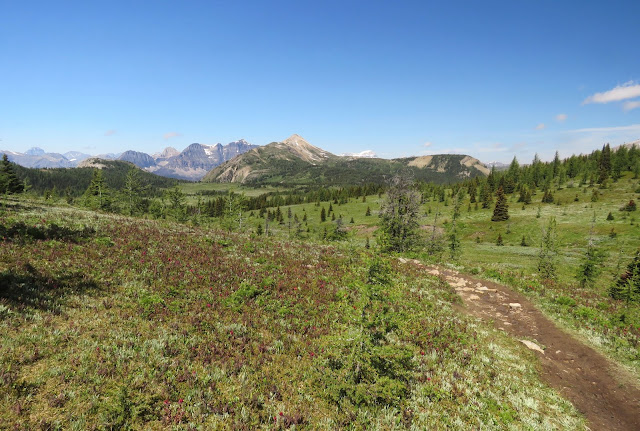 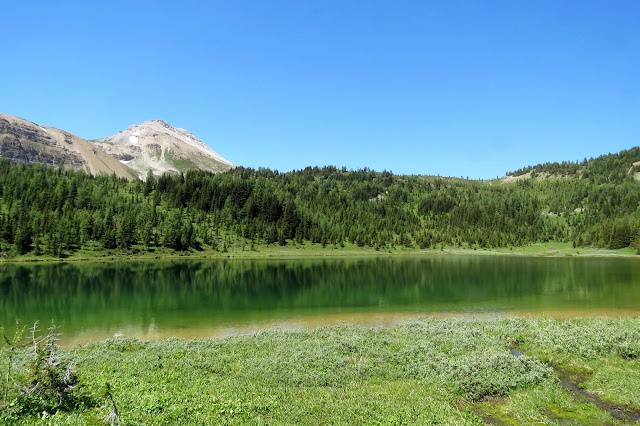 I dreaded the climb up from the Lake back to Quartz Ridge. That's the only thing I don't care about on this hike. I know I am in for it and just deal with it. It was a slow slog up on a slippery trail as the sun beat down. I made it! With still a distance to go, I fueled up on turkey bacon covered in peanut butter and some salty pretzels. 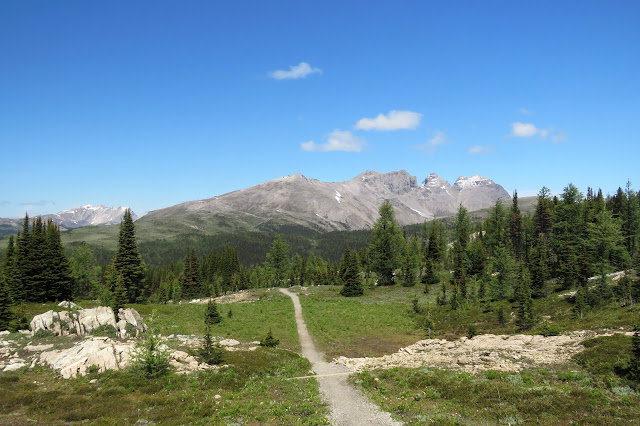 I was back to the wide open space to where I knew the end would soon be in sight. It was just as pretty as it was in the morning. I took a few last photos and then quickened my pace on the easy flat section and also on the last down hill part. I was ready to sit down at the Village have a last snack then hop of board the gondola. 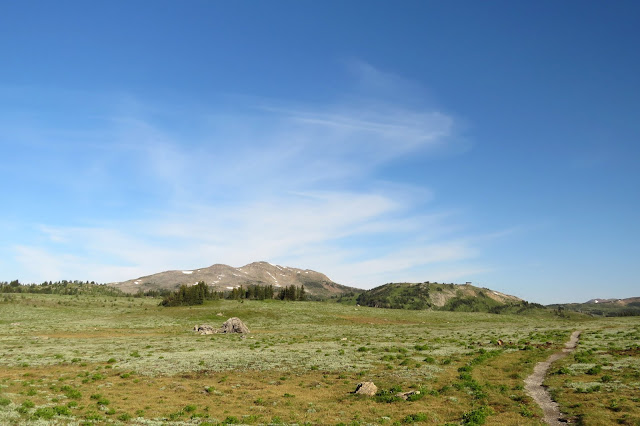 Yes the stars aligned in every which way they possibly could today. I was thankful for that and happy there were no grizzly encounters.This hike is not the most difficult but it is one of the most beautiful.Once again at day's end I felt fulfilled & grateful! 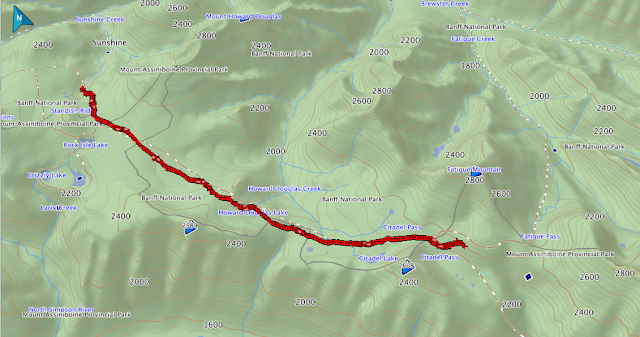