Hiking without a plan

After what seemed like hours bumping along a terrible road, we arrived at its end. There it was, an unknown trail heading up into the high country. It wasn't on any maps, except perhaps ancient ones. We didn't know where it went, or if we could even navigate it. It was time for the kind of hiking I mentioned a couple posts back. No known destination, uncertain outcome, no clue.
I have to admit I am not really on board with this. I've never really been just a wanderer. I like to have a destination. Also, I have learned over the years that while I can hike pretty fast on a trail, cross country is harder for me. I feel ungraceful, clumsy and slow. But what is life if you stick to your comfort zone? I headed upward, hoping for the best.
We lost the trail immediately in some open meadows, and poked around until we saw remnants. It was obvious that someone–probably hunters–were keeping it minimally open, though we did have to climb over dead trees. The trail curved steeply to a ridge, and then there was a final push. Though it took us almost an hour, we had only covered 1.7 miles. And we were at the site of the Mount Nebo Lookout.
It was a magical place, a long, sweeping ridge with views of the Seven Devils and Mount Nebo, still wreathed in snow. Elk scattered in the tall grass. The lookout had been demolished, but the supports were still there and the date written in the concrete–it had been built in the 1930s. 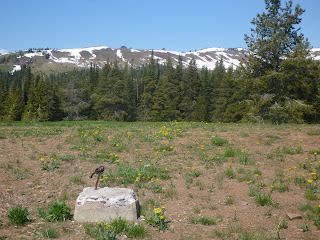 I stood in a chilly breeze and imagined the lives of the fire lookouts–back then, the roads would not have been here. They would have hiked up from far below, from the Lick Creek Guard Station. There was no water up here, so they would have had to haul it for miles, probably brought in by pack string. It would have been gloriously lonely up here. I felt a pang of envy, torn as always between wanting to live really remotely but also wanting companionship. 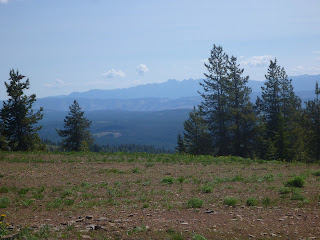 My companion decided we should make a large loop, going off trail completely by dropping off the ridge to the north and finding our way to another trail, then roadwalking back to the car. This loop ended up being four miles, but took us hours. As I inched down the steep ridge, I thought about how enjoyable this was, not clicking off the miles on an established trail. It was the Fourth of July and we wouldn't see a soul for twenty-four hours. This was exactly what I needed.