One message to him, a reply back to me, a couple of days later a confirmation was made and we were off to summit Mount Bourgeau! While it was easy peasy planning it was tough work to execute. For me it is early season to be attempting such distance and gain and for my friend this was to be his first hike with such a long distance and huge elevation gain since the summer of 2018. We did have good conditions to perform the execution resulting in a rewarding feeling of great accomplishment. 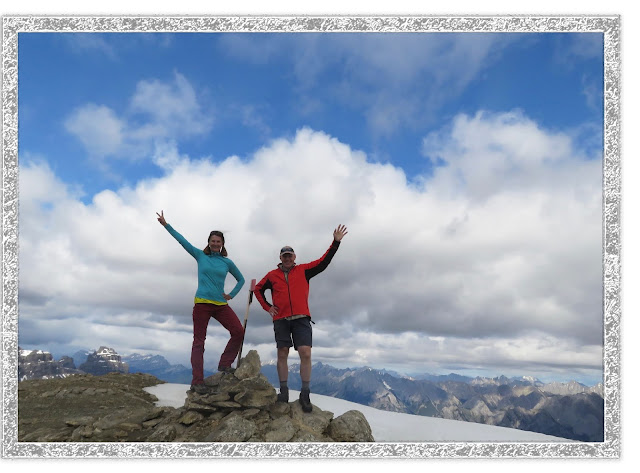 It was hot & humid already even with our early start. We attacked the first long boring stretch up to Bourgeau Lake by catching up on lifes happenings. There was lots to talk about and that was beneficial in distracting from the task in front of us. There were warnings about high water along the way and that proved true at the crossing at the base of this waterfall. We got across, got through much mud and carried on up. 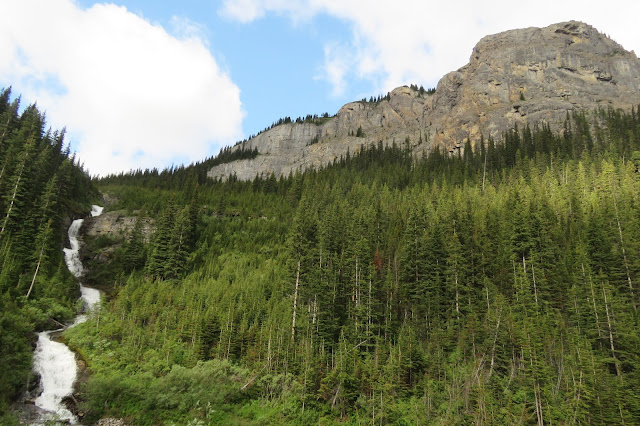 Thinking we still had some gain and distance to do to Bourgeau Lake, it was a nice surprise when we came out of the trees and there was the meadow with the boardwalk leading to the Lake. Here we noticed it to be much cooler. 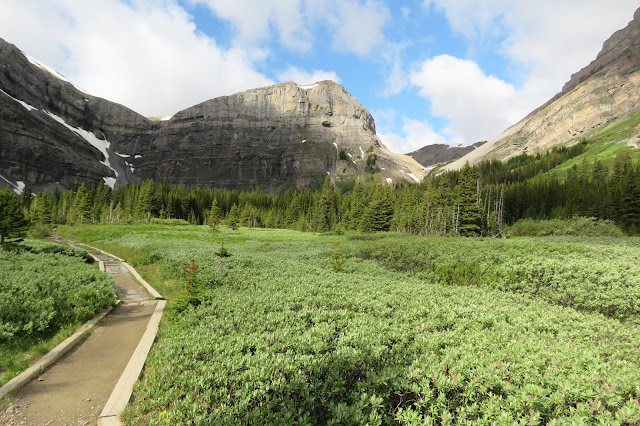 taking some time at Bourgeau Lake 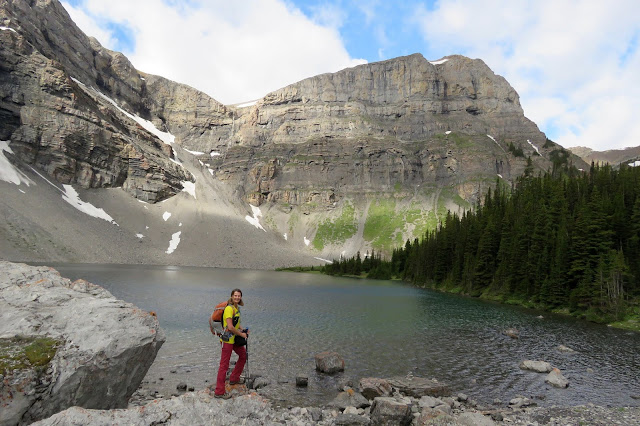 a marmot along the trail above the Lake 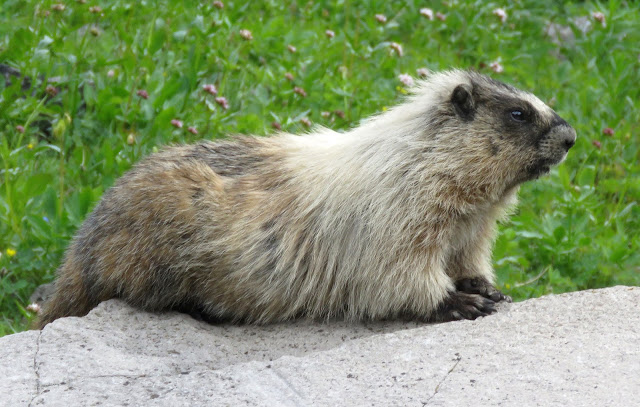 There were reports of snow patches on the way to Harvey Pass and there were two that we needed to traverse but they are not even worth mentioning. We reached the lower Harvey Lake and could see a clear trail along the way up to the upper bench. I was beginning to think now how nice it was to be here in early July when there is still snow. It makes it a new experience compared to the three times I have been up here years ago. 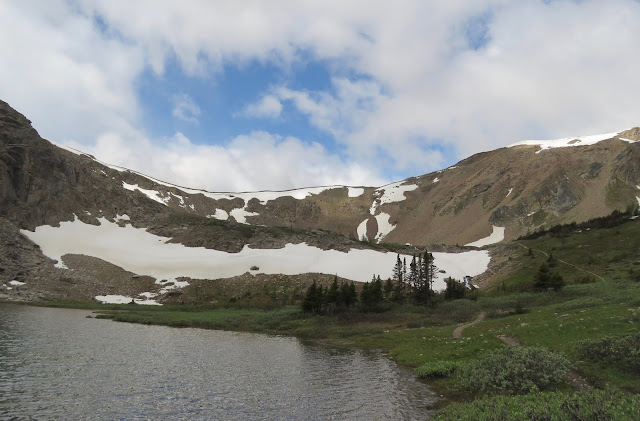 We arrived at the bench above the lower lake. Notice the watermelon snow in the middle. It was time again to take some time, this time to sport an additional layer and to fuel up. My choice today was to fuel up on turkey bacon covered with peanut butter and a few salt covered pretzels. 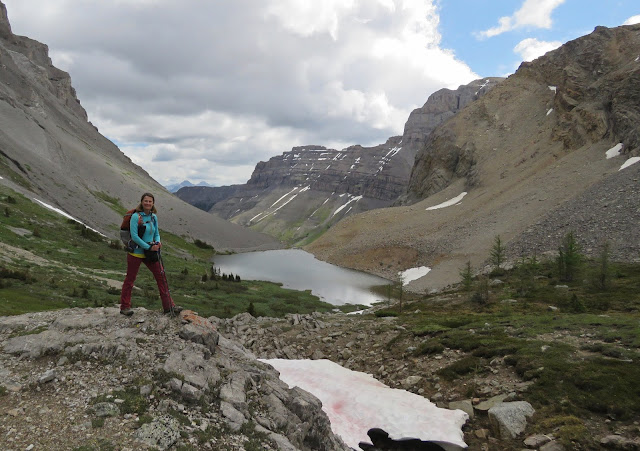 We continued on with our day hiking onward and upward to the upper Harvey Lake. It was a sight to see being emerald in color with ice floating in it. On the way up the ice was at that far end but on the way back the ice was at the other end. It was very windy in this area and we assumed the wind blew the ice across the lake. 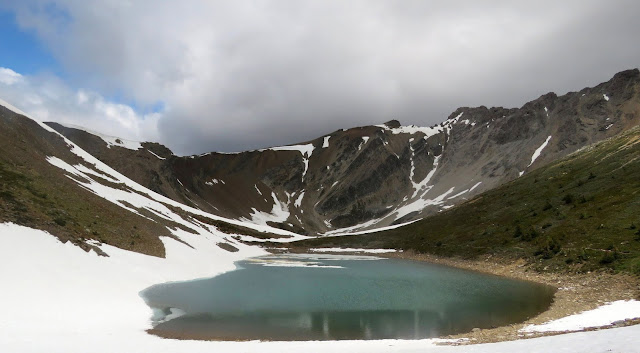 The higher we climbed the windier and colder it got. We stopped again to add on yet another layer. My friend spotted a ptarmigan. It took a few seconds for me to see it as it blended in with the rocks. Half white, half brown, yes it still feels like winter this high up. 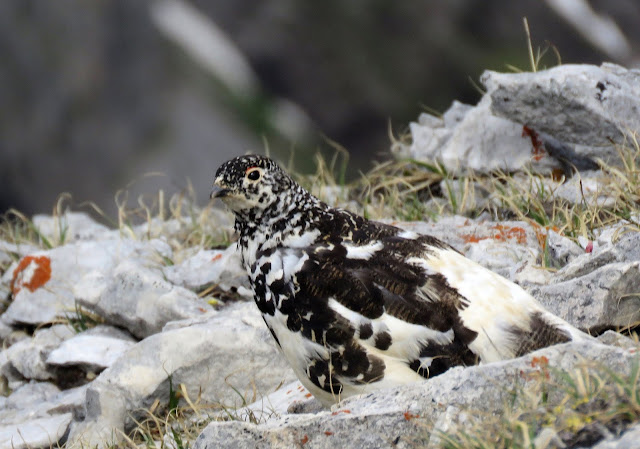 We are now able to see forever. Here you can see on the left the road that goes up to the Sunshine Ski Hill. It was over there somewhere where I wandered about on Tuesday. 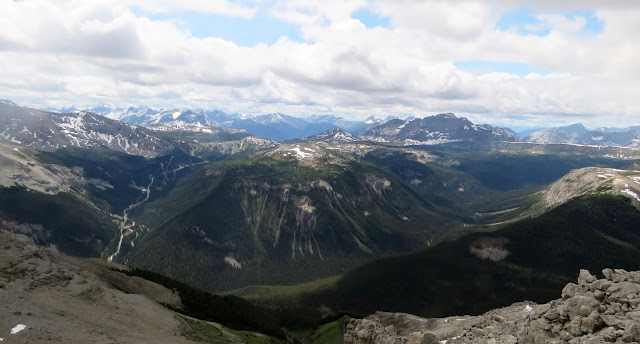 The closer to the summit we got the more short tiny breaks I needed. It was also very scenic with an abundance of opportunities for great photographs. There was still snow on the edges with great big cornices as you can see behind me.

We made it! WOW! Holy Doodle! Amazing! This is our jubilant group shot on the summit of Mount Bourgeau! 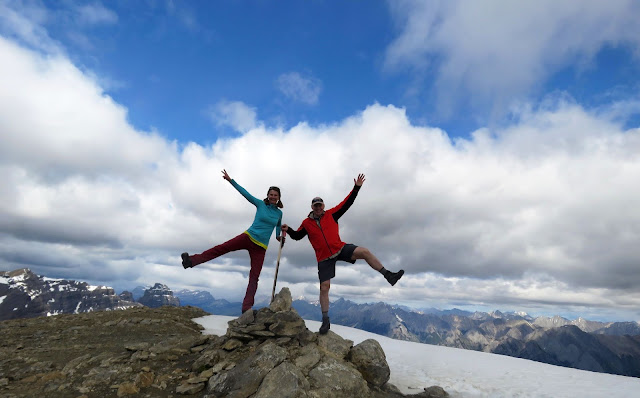 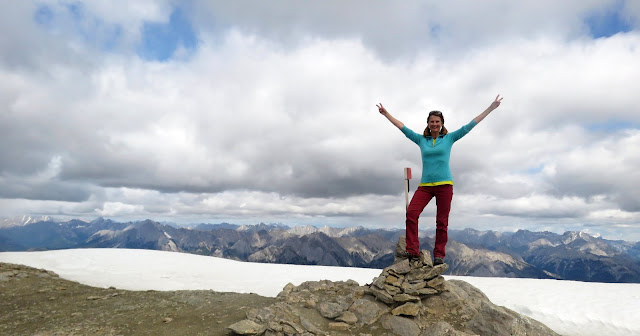 We took shelter behind the weather station with this being our dining time view. You can see Mount Assiniboine on the right. I devoured half of my turkey, chicken, ham, cheese sandwich, more turkey bacon covered in peanut butter, a bunch of apple slices, some pretzels, a fruit bar and a handful of bar-b-qued chips. 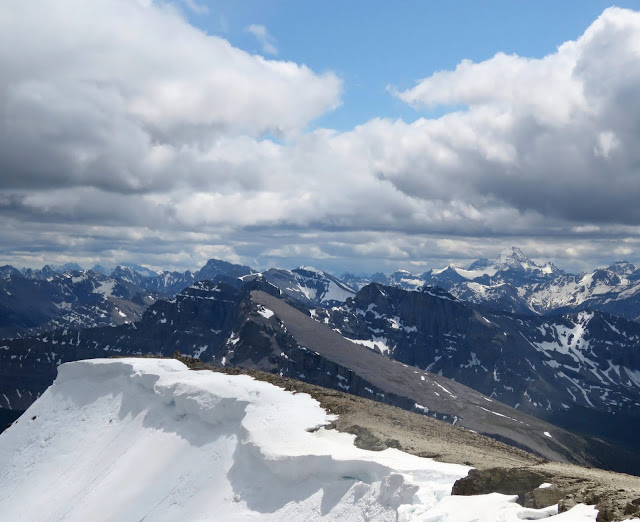 We strolled along the summit ridge to the far end to enjoy a different view from another angle. 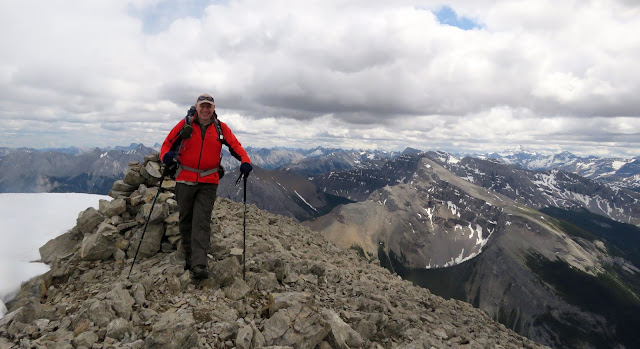 I preferred to safely sit on the summit cairn! 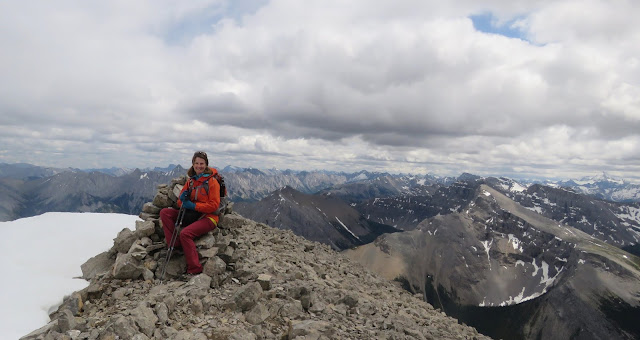 looking back at the summit, the weather station and the cornice 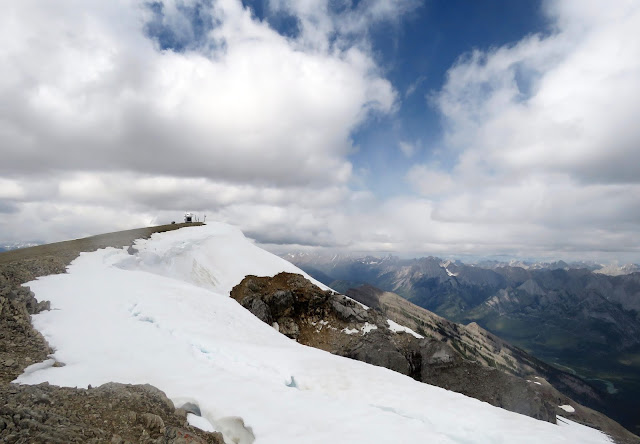 After almost an hour at the summit, we began the descent. You can see the emerald upper Harvey Lake in the lower left of the photo. 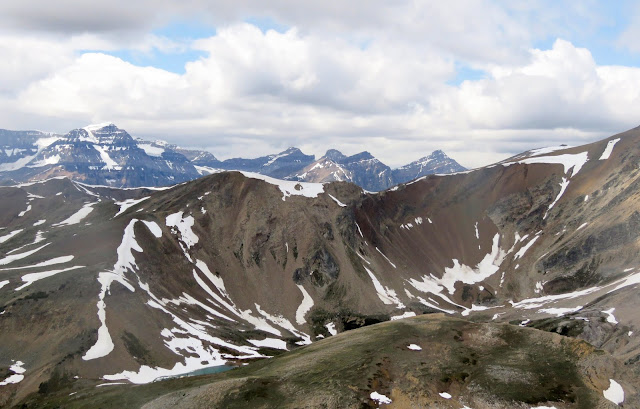 There is Bourgeau Lake in the middle bottom on the top part of that grey section. 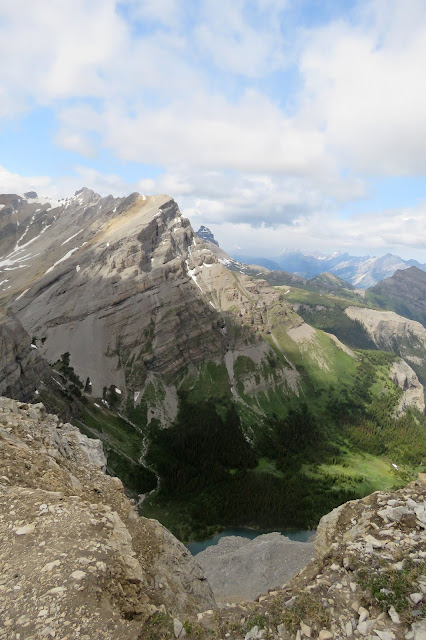 Now back down at the bench plateau area above the lower lake, we took another break. It was time to shed extra layers and fuel even again because we still had a long way to go. I had much of the same as I had on the summit but in addition to that my friend handed out Italian chocolates! 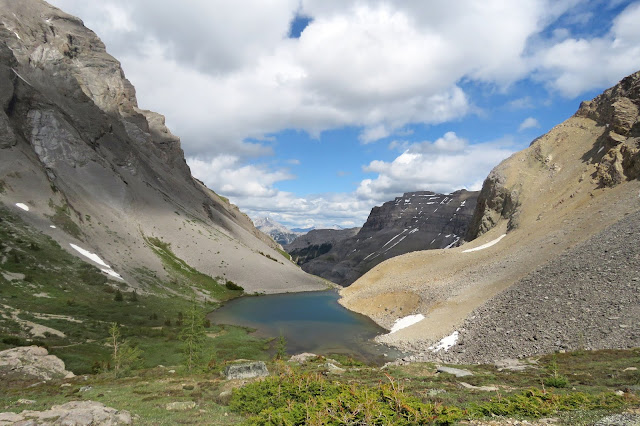 We got back down to Bourgeau Lake and made a very quick consensus to just hike on by it. We continued on and headed into the trees for the long boring stretch where once again we carried on with catching up. At a last open section I noticed the paint brushes which I did not notice on the way up. I needed a photograph of this as the colors were wonderful with the lighting at this time of early evening. 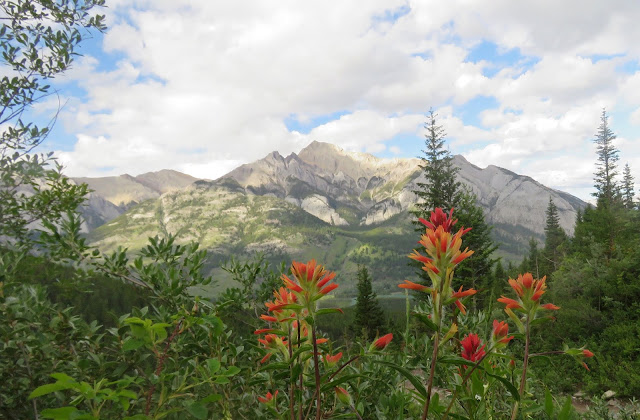 What an accomplishment! It was good to be done! My "dogs were barking" (sore feet from all the rock), and I was a sweaty mess. I savoured getting those boots and socks off and putting on my pink/orange compression sport socks for that comforting hug on my calves, ankles and feet. When I finally sat down in my friend's vehicle, I sighed!
Thank you so much for sharing this day with me! 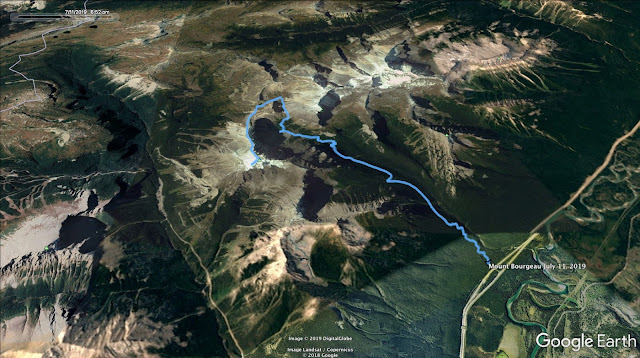 Exclusive Himalayan Treks For Families and Children This Autumn!