Unmarked Winter Hike in the Wilderness of Cerna Mountains, Romania 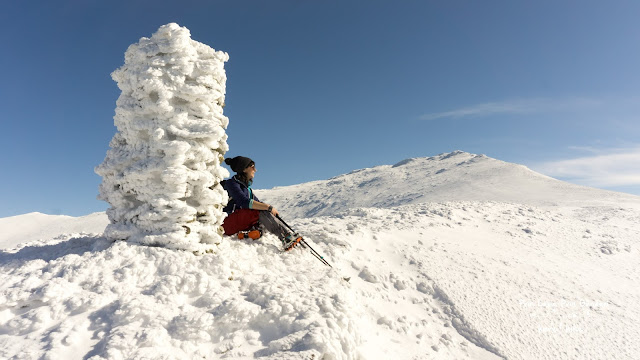 Cerna Valley is one of those places in Romania that never ceases to amaze me. Our destination for this hike was Zglivar Peak, another mountain in the area that doesn't receive enough interest and as such most footpaths that lead to it are unmarked.

How to get there?

Our final destination for the GPS was Lunca Zaicii via Caransebeș – Plugova – Globurău – Pogara – Cornereva – Zănogi. The last part of the trip is through narrow village roads that are not in the best shape and that are mostly used by locals that have a bad sense of speed… so please take care. 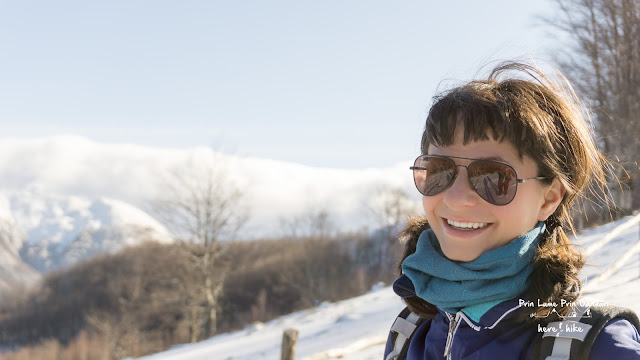 Most days for the last couple of weeks were marked by bad weather, cloudy skies, and rain… all except for the 10th of February. With this in mind things were clear on our end, there was no room to stay indoors! Since we skipped hiking for some time now we found this the perfect opportunity to spend the weekend together outdoors and to try to reach Zglivar Peak on an unmarked footpath – adventure time! Woohoo! 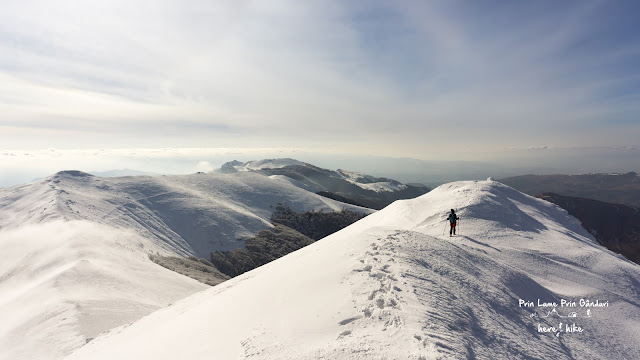 Since the area has close to zero touristic infrastructure we had to take some preparations in order not to get lost as the chances to meet someone up in the mountains that you can ask for directions are slim. In order to catch our bearings and to have some sense of orientation we created a manual GPS track from satellite images.
We weren't sure how and where to start the hike so we had to search for a decent parking spot. We found one close to the wooden bridge that takes you over the river in Lunca Zaicii village. The dirt road ends at some houses located under the hill. There was no visible footpath or clear way so we ended up going through the people's backyards – not the best way since you need to climb a hill head on – but it got the job done and we managed to do our "warm-up" also.
A word of advice: follow the dirt road – we used it for our decent as you can see in our GPS track linked. Also, pack water with you as we didn't find any reliable sources on our way (even though we passed close to a few sheepfolds).
After we climbed the hill through the people's backyards we reached a dirt road that accompanied us for a decent amount of time and made our ascent much more civil. 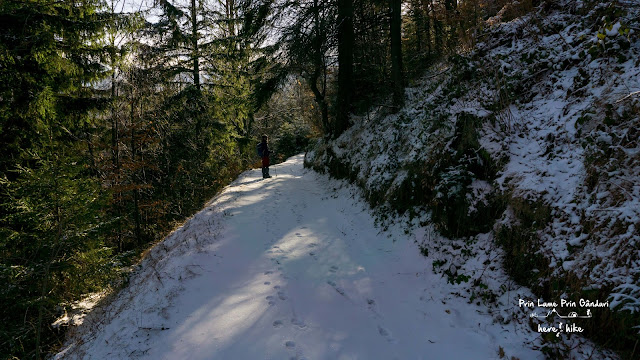 When we reached our first clearing we saw the distant peaks shrouded in clouds and we were not sure if it was worth it to hike all way to the top in these conditions. Since we had nothing better to do we continued onward. 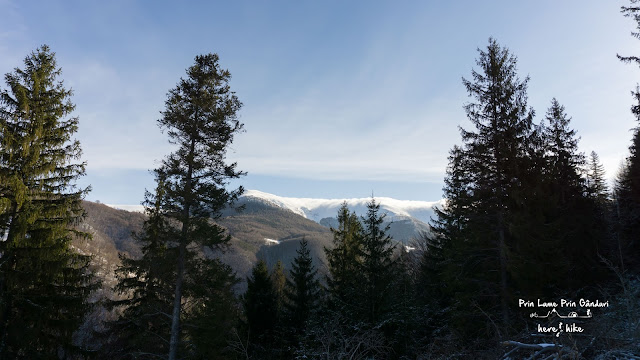 The winter track was untouched, we were the only ones in the area. We had no clue if what we sketched up on our GPS was doable or not but it was worth the shoot.
When we left the forest behind we found a couple of sheepfolds that looked operational during the warm season but now were completely deserted. The sun was shining bright and the snow cast a strong reflection, such a great day! 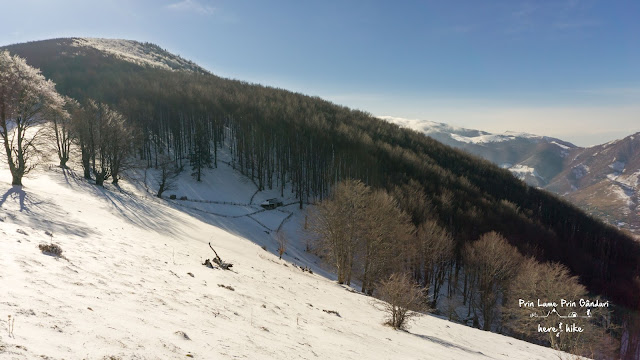 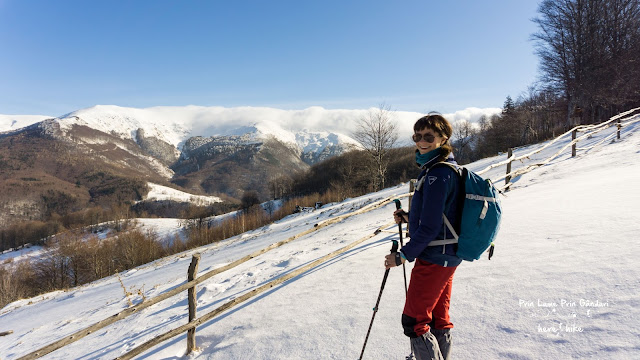 From here we continue to pass through the forest on a footpath that doesn't look like it has ever existed. The only things to guide us are the multiple writings on the trees, this primitive form of graffiti so widely spread over the South-East of Europe. We can't really say we understand the human urge to carve someone's name on the bark of a tree. In any case, we are sure that the path is much more visible during the warm season. 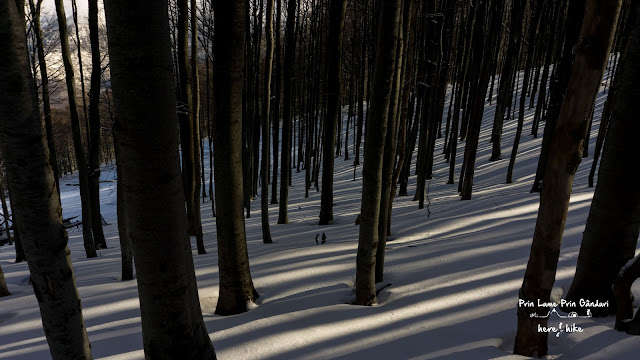 The forest was full of animal tracks, from birds to rabbits, foxes and even some bigger ones most probably made by does or deer… but everything was very quiet. These footpaths that are seldom visited by tourists still hide an abundant amount of wildlife even though we could only see traces.
Again we leave the forest behind and pass close to the last sheepfold of the hike. Everything is so still and enchanting to the eye. 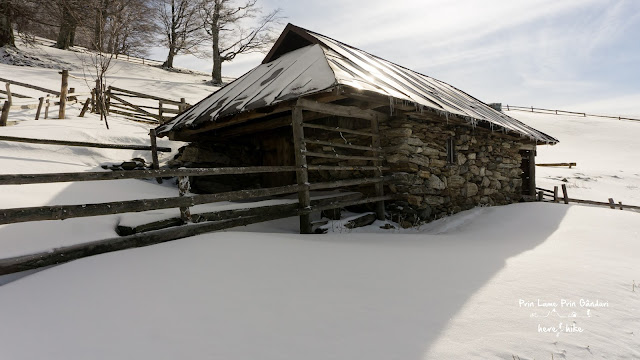 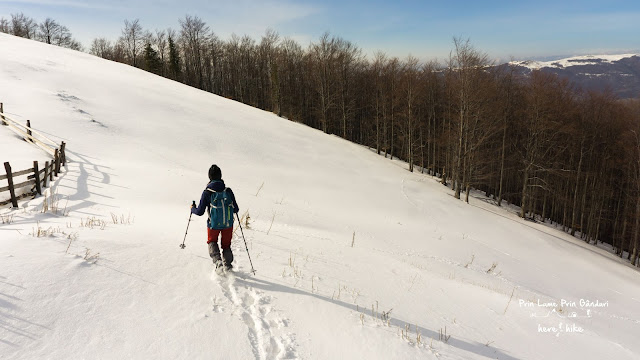 We go around the sheepfold and we are starting to see our final destination, which to our surprise is now above the surrounding clouds. 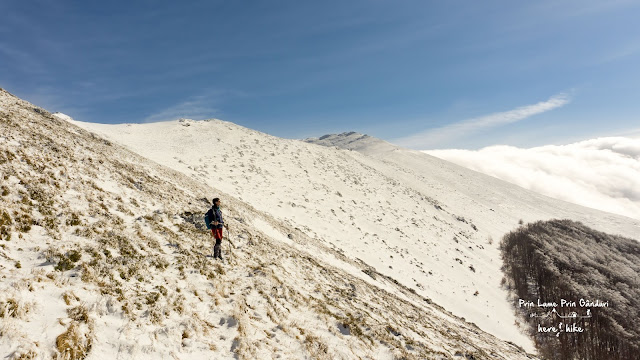 All around us the neighboring peaks were covered by clouds except for our little mountain top. 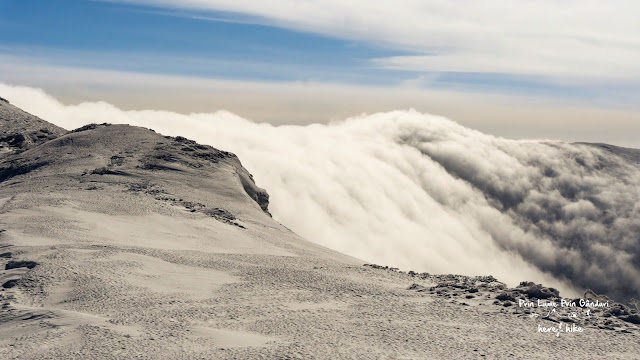 Above 1400 meters altitude everything was frozen so we had to put on our ice crampons in order to continue the ascent without a worry in the world. Slowly we made our way up the mountain and rejoiced in the winter landscape. What a perfect day! 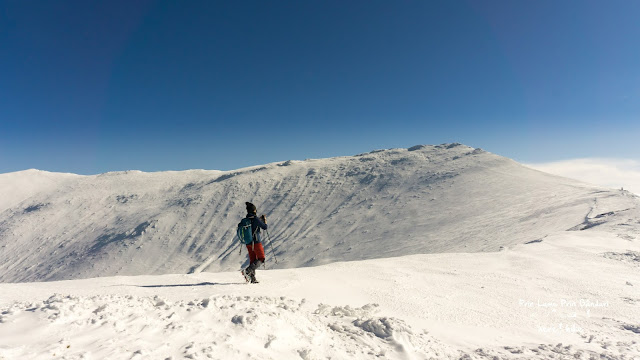 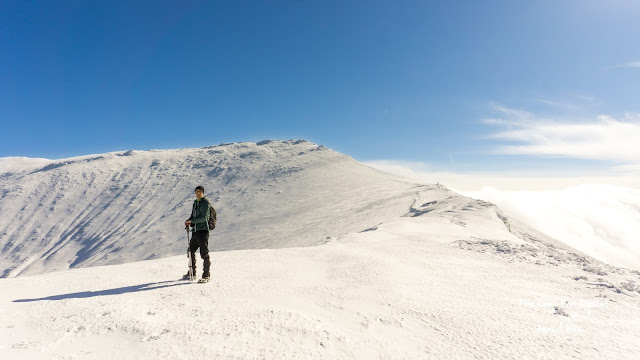 Zglivar Peak is 1713 meters tall and is one of the highest in the area. From Zlivar you can reach Vlascu Mic Peak in about 30 min tops which is located at 1733 meters above sea level. As we look at the whole ridge we start making future plans for a multi-day hike here that would cover the whole mountain range. 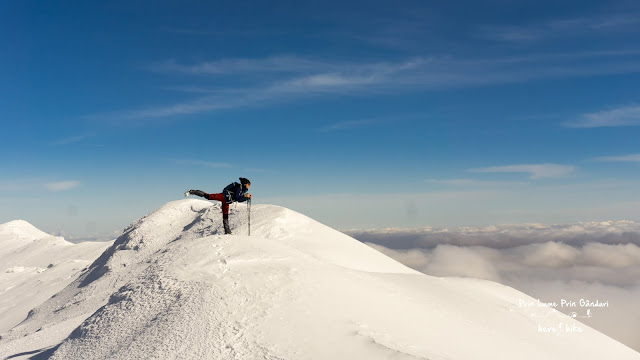 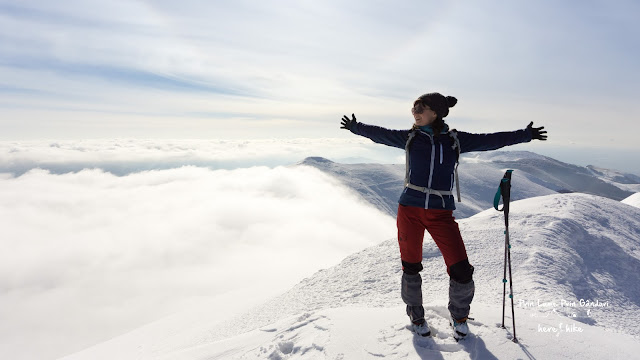 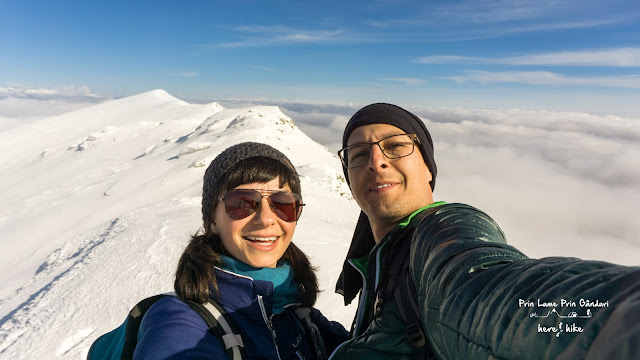 To our left Cerna Valley was still shrouded in a thick layer of clouds, just perfect for a photo shoot. We stayed up there until the cold persuaded us to start our descent. We had a slow ascent (the lack of training over the winter time was starting to show) but going down was quite fast. 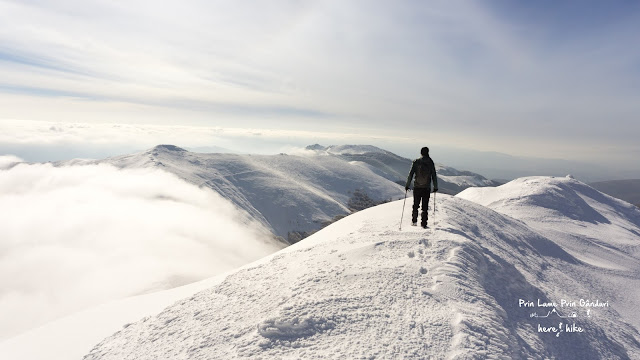 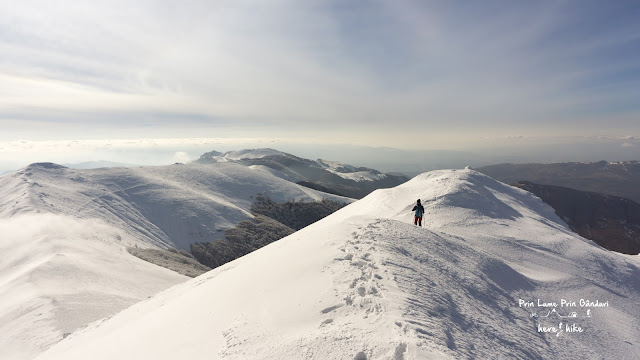 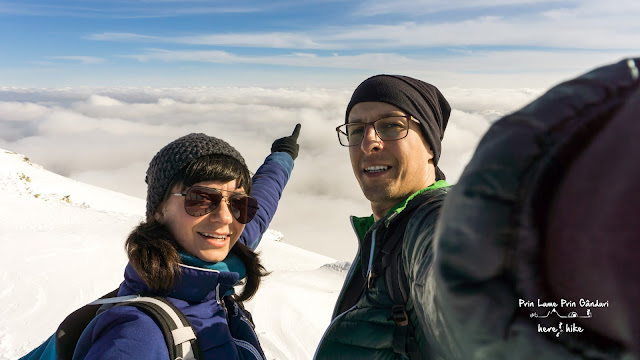 The funny part was that in the morning everything was frozen still and we had snow starting of from 600 meters altitude. While descending we found only mud under 1000 meters. It is strange to see a totally different landscape in only a few hours. 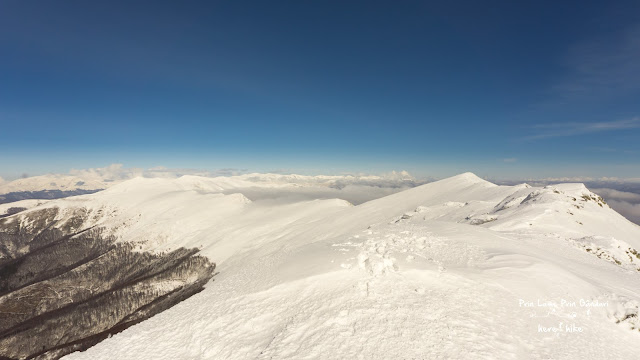 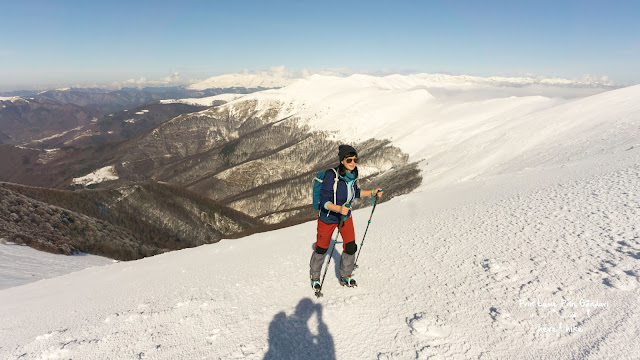 All in all the hike was great and we were very lucky to have such excellent weather. As a general advice if you are just starting to hike: stick to the marked trails. If you don't know what you are doing or you catch bad weather there is a decent chance to get lost on this trail and it is best to avoid such adventures.
For those with a bit of experience and especially for those who are found of cross-country skiing this hike is pretty wild and fun! Hopefully, in a few years time we will be able to come back with some information on cross-country skiing also, but for the moment it is still work in progress. 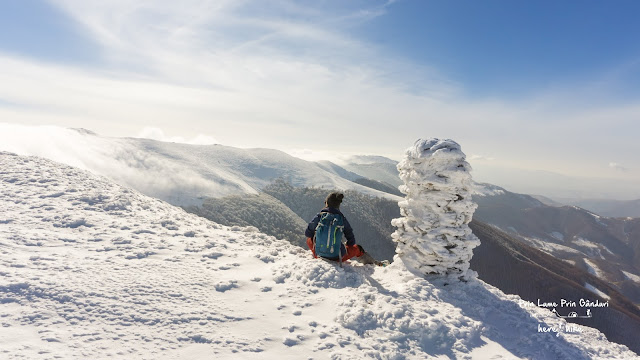 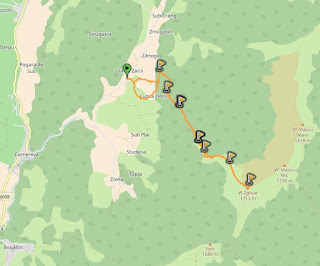 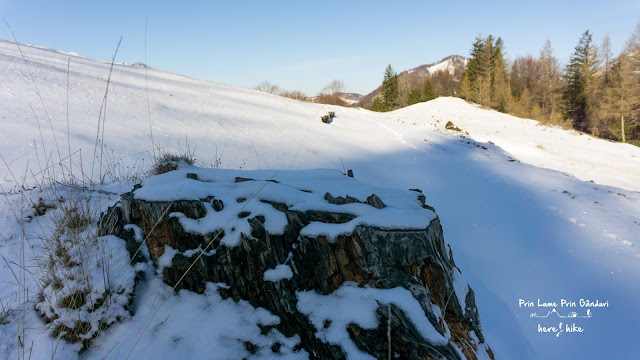 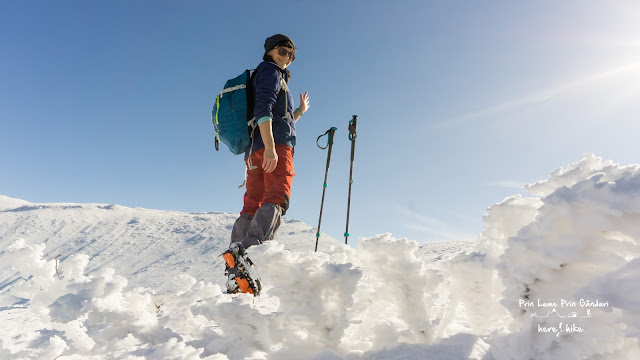 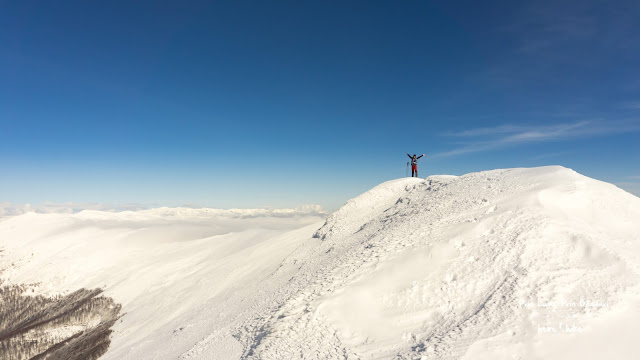 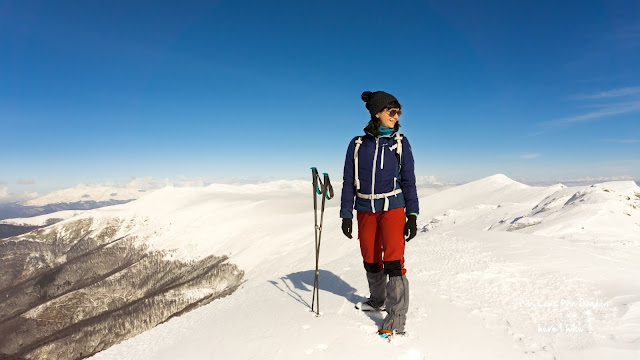 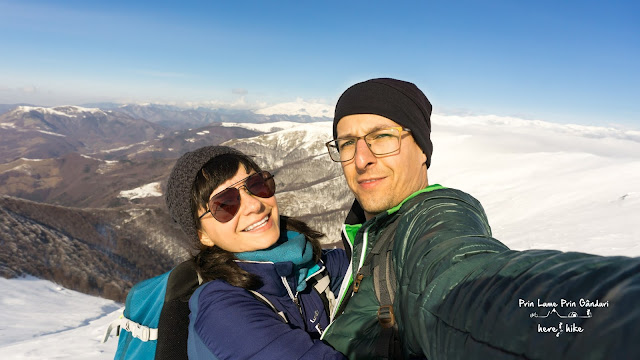 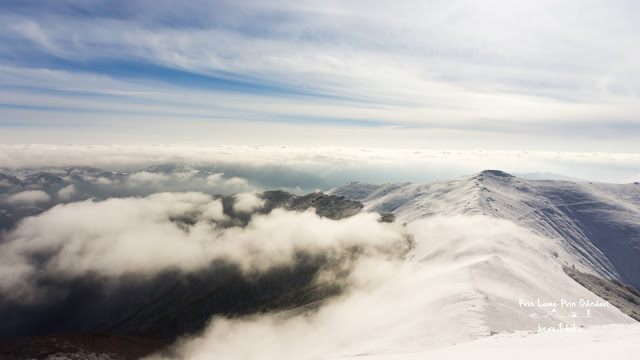