At an early hour this morning, two club members headed into the wilderness from the Trail Canyon Trailhead where we were the only car in a big parking lot. It was chilly so we layered our fleeces, scarves and coats. Knit hats and gloves finished our couture du froit. The first hike up Trail Canyon of the year is always a big deal. So, we started at a very slow and comfortable pace. Yesterday and the day before, more snow was added to the mountainside. How far could we go? It wasn't long before we noticed that there was at least one hiker and at least one really big dog that had placed their footprints in the snow before us. We started celebrating each landmark!

The water tank, the wilderness sign, the wash crossing …. It didn't take long before the large snow patches became a solid hillside of snow.

As we hiked, we watched the hiker's footsteps and those huge paw prints. The wilderness engulfed us with shadows.

The low morning sun created long tree shadows that decorated the snowy trail like a GOBO lens covering for stage lights. When we arrived at the "Halfway" point where the trail veers to the right and big rocks are spread on the left of the corner, the snow was a consistent covering of around one inch. This is also where the previous hiker's tracks stopped abruptly and turned around. Ahead of us was a clean trackless trail. By now, after so many years of hiking in this area, both of us could probably do Trail Canyon with our eyes closed! So following the snow-covered trail was no problem as we imagined every footstep on bare ground.

The camera kept jumping into my hands for the incredibly beautiful winter wonderland landscape. The snow beneath our feet was on the crunchy side and very easy to navigate.

Although the beginning of the hike was laboring in the higher altitude … higher than Red Rock Canyon and Lake Mead areas … once we got up past 8500' or so, the thinner air was not noticed.

Due to our slow pace, we were actually having fun, on Trail Canyon! Lots of photos. Investigating a lot of bunny tracks, bird tracks, ground squirrel tracks, and possibly a deer. Taking each other's pics, being silly … and other girl stuff. Even though this was the longest it ever took either one of us to get up to the saddle, the hike up seemed very short. Next thing we knew, we were hiking into the saddle area. Still, there were no human tracks around. We laid our packs on the saddle resting log and hiked up to the overlook to the right for a few photos. (See the first two photos of this entry.) This was our target for today's hike and we were quite satisfied!

Charleston Peak and Griffith Peak were both snow capped; resting under their blanket before the onslaught of summer hikers make their assaults.

The sign on the saddle asking hikers to beware of undetonated snow bombs is still there.

We sat for just a couple of minutes before we lightened our couture a little and started down. Right away, we noticed that the snow had started to melt. We were so glad we had started up early and experienced the pristine white blanket on the trail. By the time we got down to the "Halfway" point, the trail was almost clear. We passed only two pairs of hikers on the way down. Great way to start your day!
4 miles; 1550 feet elevation gain 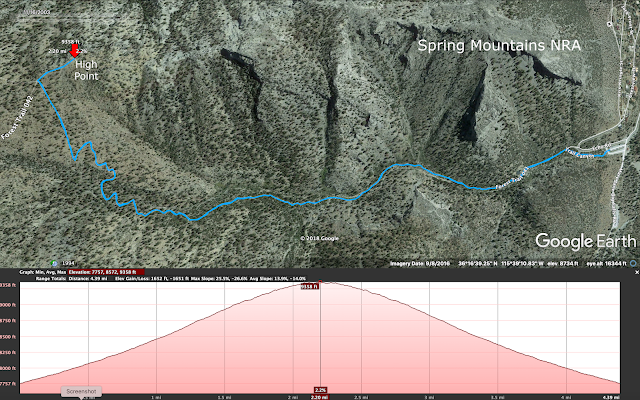 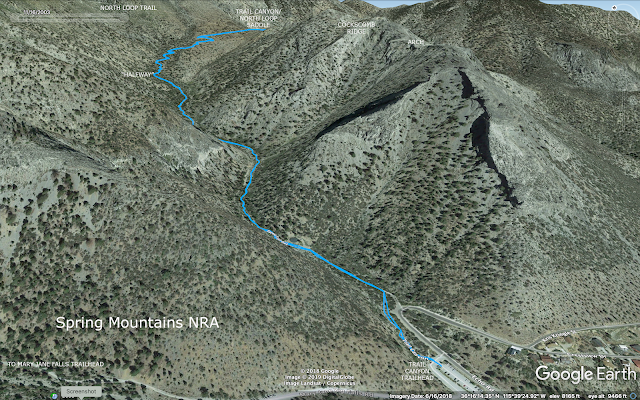 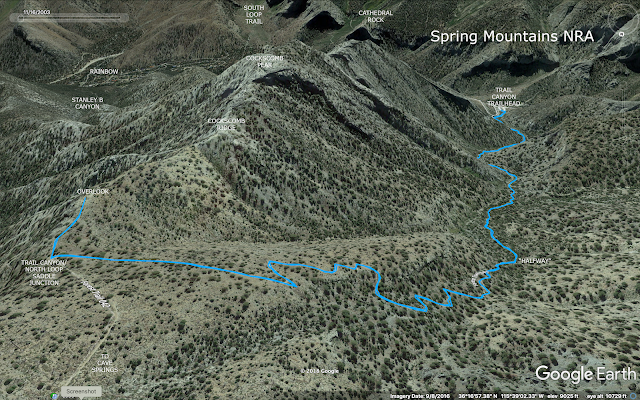