Another fall week with good weather predicted, another early wake up and long drive to summit a few more peaks in the Rawahs. Due to my earlier navigation error, I left myself with one higher summit in the group north of the Poudre, Cameron Peak. Since that one wasn't enough for me to do that long of a drive, I also planned to visit Table Iron and Iron Mountain, on the south side of the Poudre and an extension to the part of the Never Summer Range that is in RMNP, as well as the three 10ers off of Long Draw Road.Now it's a few months later, cold, and I'm sitting at home with a sore ankle. 6 summits in a day from four different parking areas seems like alot!For days in which I do multiple things from different places, I'll usually plan to do either the longest drive, hardest thing, or thing I want to do the most first. On this day, I decided that Cameron Peak was the priority, as that seemed like it might be the most difficult thing to get if it snowed soon.I wanted to start and end from a different place just to check out the area a bit more, so I planned to start from the Blue Lake Trailhead, which is off of highway 14 not far past Road 103, taken in all previous reports on the area.Since I imagine most of you will be starting from the east, head west on highway 14. The Blue Lake Trailhead will be on your right, just after the sign for Long Draw Road. It's almost exactly opposite the road in fact. I started just before 6 am, another early wake up with a 2ish hour drive to get there. There isn't a bathroom at this trailhead, fyi.The trail starts out pretty mellow, with a short descent and not too steep climbing until you cross Fall Creek. There are a few spurs, old jeep roads and the like, but none looked more obvious than the trail, so just keep on. Things get a bit steeper after crossing the creek, and you start to do some real gain up until Blue Lake. I did most of that in darkness, and made it to the lake just after sunrise. It was pretty spectacular. 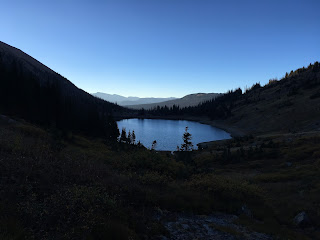 Looking down at Blue Lake and summits behind from near the saddle.
I continued around the lake, and started up once I was close to the saddle. The week before, I'd sat at the saddle and calculated it would take me two hours up and back to the summit. Now I was there, how long would it actually take?
The terrain was ok, right at treeline. I was generally able to avoid it, but did have to bushwhack short sections to continue toward the summit. Once I got past the trees, I just continued up until I popped out on the summit ridge, just to the north of the summit. A quick jog, and I was there. 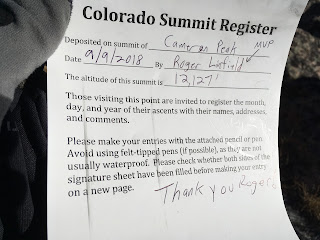 I've found a bunch of his registers this year, thank you Roger. 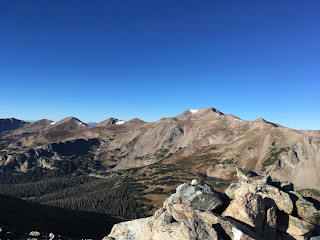 Looking to the peaks to the south of the range. 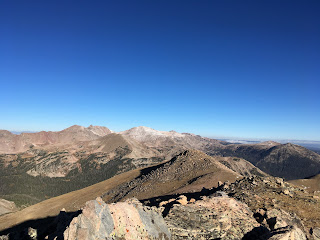 And to the north; note the snow that wasn't present the week before. Guess I got there just in time.
I jogged back down the hill to the saddle, slipping and falling backwards to put a hole in my new jacket. Argh! 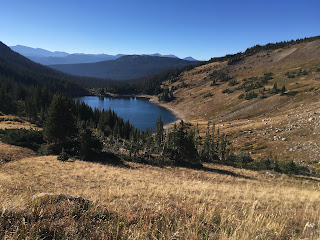 Blue Lake from above. It took me 1:11 to get saddle to the summit and back. I should've just went for it the week before. 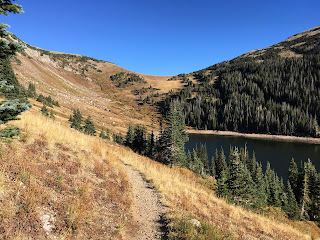 Looking back to the saddle. 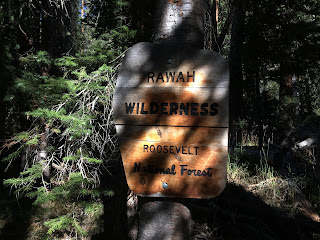 The Rawahs and Roosevelt National Forest.
While I did run some of the trail down, I wasn't feeling too motivated and fast hiked most of it. I got back to the car without seeing another person on the trail. It took me just over 4.5 hours to do this section. I got into the car and started out for leg two.
I continued west for a few more miles along highway 14, and parked at the Cameron Pass Trailhead/parking area. I got empty wrappers traded out for new snacks, and filled up my water. My plan to visit Table Iron and Iron was pretty simple, just cross the road, head uphill until treeline was broken, and then head toward the summits. Turn around at Iron Mountain and go back. Pretty easy. Hopefully.
The uphill was pretty intense at first, lots of deadfall and so forth, but thankfully movement got a bit easier as I gained altitude, and I popped out of the trees and on to tundra about 40 minutes after I left the car.
The views started, and didn't stop. 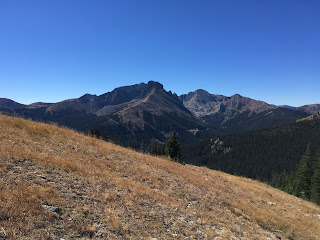 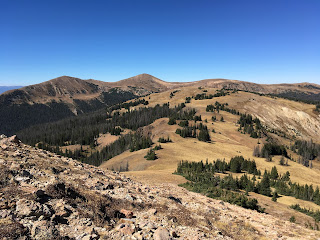 And looking back the way I'd come shortly after. South and North Diamond Peaks are the prominent points on the ridge behind and are accessible from the same place I started. I reached Table Iron pretty reasonably. The summit is rather flat and broad. 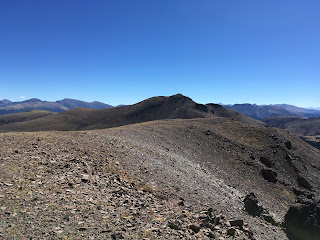 At Table Iron looking toward Iron.
I was able to make great time here as the going was generally pretty easy between the two. 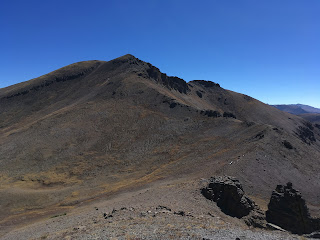 As I got closer to Iron things looked a little more imposing, and I wondered if there might be some scrambling on crumbly rock in my future. 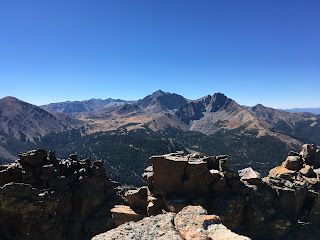 One of several outlooks providing great views of the Never Summers. 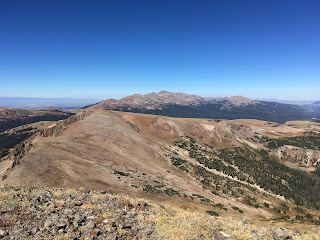 Looking back to Table Iron and the Rawahs.
There was a little bit of loose rock here and there, but nothing too bad, and no scrambling was needed to reach the summit. 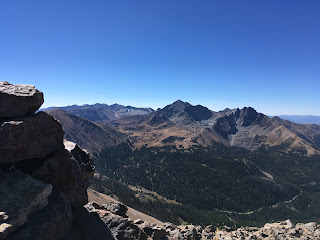 Off the summit behind a wind block and the views were great!
I thought about the way to go here. I could go back the way I came, but Michigan Ditch Road looked so close below me. 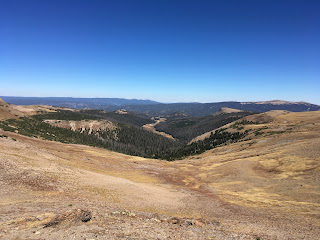 Looking northeast to Trap Park.
I got to the saddle between Iron and Table Iron, and it was decision time. A fateful place, I decided that heading down to the road looked reasonable, and I could jog back from there.
Within a few hundred feet, it became obvious this was perhaps not the best way to go, as the terrain was very steep, and loose in places. Fortunately, that didn't last too long and I was soon into trees and more manageable terrain. There was little if any bushwhacking; I was generally able to pick a pretty clear route down. I did encounter and briefly follow at least one very old road, I presume a logging remnant.
I hit the Michigan Ditch soon enough, and was able to find a shallow and narrow place to jump across. My plan to run the road back was hindered by a lack of motivation to actually run, so I did the best I could to keep the pace high. 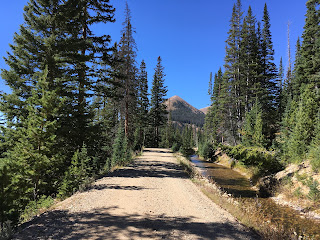 Along the Michigan Ditch.
I got back to the parking at 2:29 PM, the day still young. Or young enough for me.
I started back along 14 east, and then turned onto Long Draw Road, almost exactly opposite the earlier trailhead visited for Blue Lake. I followed this and eyed up the parking possibilities in the area of Trap Lake for my drive back, then continued on Long Draw Road by turning right after Trap Lake.
My goal was peaks 10980 and 10736, on opposite sides of the road. I'd looked at the satellite photos before hand on Google, and found a few likely places to park. I ended up at a pullout at 40.538413, -105.794820, on the east side of the road.
From there, I headed east, initially gaining some scrambly elevation. Movement was generally easy, and the forest pretty open once past the initial gain. I passed though a few grassy meadows before reaching the summit. 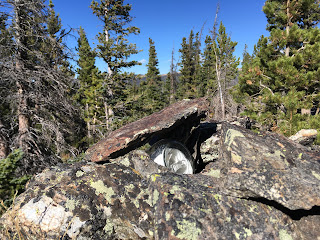 Not often signed into register.
From the summit, I headed south and then west, enjoying more of those meadows before following a drainage back down to the road.
From there, I looked west to 10736. While there was less than 500 feet of gain to get to the summit, it was steep, with that gain coming in half a mile. There were a few steep rock faces that came down to the road, so I had to find a weakness before starting up.
Fortunately, the forest was once again open with minimal deadfall, and the summit came fairly quickly. 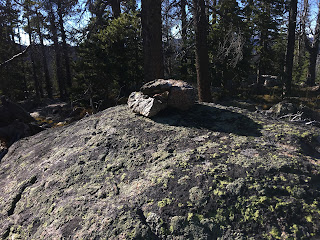 10736.
From there, I headed back east to the road, trying to stay north of the route I took up and to finish closer to the car. I encountered a few of those steeper rock faces, but was able to find a way around them easily enough, and popped out on the road just south of my car.
This trip took 2 hours, and it was now 5 PM. Still early enough!
I drove back north on Long Draw Road, and turned left at the intersection mentioned before. I decided to park in a pull out at 40.559076, -105.816106 on the south side of the road overlooking Trap Lake. This was almost south of 10472, and it looked like the path of least resistance to the summit.
It wasn't at first, with lots of dead fall. But soon enough, things cleared up. I again followed the path of least resistance, trending north while going around anything that looked too difficult. 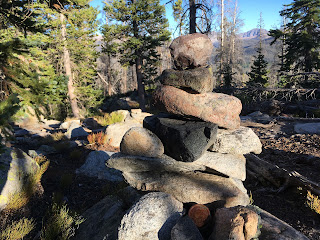