As detailed in the previous post, I made a pretty dumb navigational/identification mistake and got pretty close to but did not summit Snowbank Peak in the Rawahs. Hopefully I won't make a mistake like that again, or at least for awhile!I set out the next week to correct that error-it would've been a pretty mellow day otherwise. Well, relatively speaking. But having to kick back north added about 7 miles and 1000 feet of elevation gain to the day. Then again, the area is awesome, and I was looking forward to the day ahead. Like the previous week, the weather didn't look so great in the sense that a storm had come through the previous night, and it was predicted to be super windy again-if it weren't late September, I probably wouldn't have gone due to that. But it was late September, and I REALLY wanted to get these ones done this year. Not going now risked the chance of snowfall, which would make these peaks more difficult and maybe impossible to access.I headed up, sleeping at home this time and getting up at dark o'clock to make the long drive- nearly two hours from my house, and I started from the trailhead at 5:30 am. Follow the same directions provided last time, taking road 103 north from CO 14. Park and start from the West Branch Trailhead, on your left shortly after Tunnel Campground.Since it was dark and I was covering ground both down in a valley and which I'd covered before, I didn't take any photos for the first few hours. I'd stay on the West Branch Trail until I reached the Rawah Trail, and then take that toward Twin Crater Lakes until I found an appropriate looking place to cut off towards Snowbank Peak.I used a technique I'd used several times this year to lighten my load a bit, starting with minimal water and a filter, so I could carry less weight initially and fill up at a source before heading up to the peaks above.I stopped at the creek exiting the lakes, and filled up. I saw and waved to two people who were camping in the area, the only two I'd see for most of the day. I started up, at first following a route I'd mapped as it looked like access might be a little tricky. I didn't follow that completely in the end, and the way I went looked (via the satellite images at least) to cover more grassy/tundra terrain instead of the rocky and possibly loose stuff I'd planned to ascend.I reached the summit shortly before 9, entering the clouds. 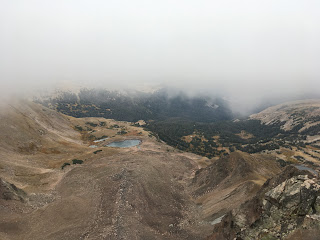 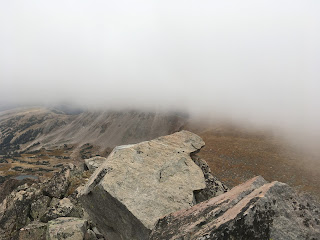 The summit of Snowbank Peak, finally.
Though I still felt like an idiot for walking by it the week before.
I continued south to Rawah Pyramid. 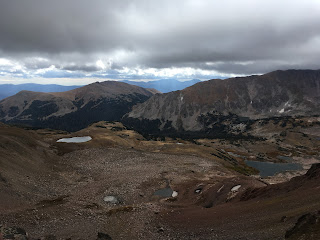 Looking into my still socked in future. 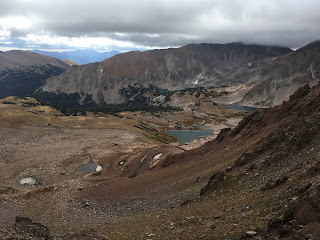 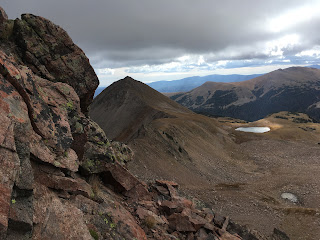 Out to Dodad Peak from the descent of Rawah Pyramid.
I stayed on the south ridge from Rawah Pyramid for a bit longer this time, hoping this might lead me to a better way down, since I would be generally trending south from here. The descent seemed a bit more stable, but no major difference. 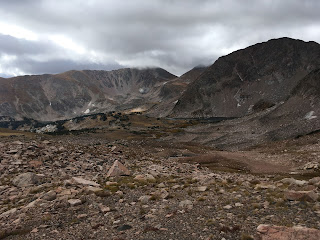 Clouds kind of clearing…
I was able to get up to a jog here in places, passing Carey and Island Lakes before hitting the talusy terminus of the east side of Mount Ashley. This looked like it would be one of the most difficult sections to get though, with rock of unknown size, quality, and stability. But it really wasn't too bad, with a small loose section here and there.
The small lake after the rocky section provided a nice leeward respite, and I stopped to refill my water. The area around the small body of water south of that was slightly marshy and muddy, and proved a challenge to cross while keeping my feet dry. Some animal trails helped me through the brushy small growth here, and soon enough I was climbing yet again, on my way to Lewis Peak. 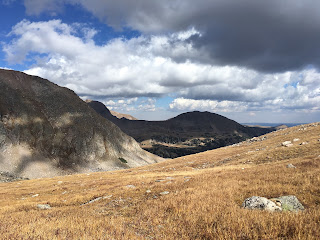 Finally in some sun looking back.
I sat here for what felt like a long time. It was warm in the sun and I was mostly out of the wind. I wanted to stay there forever! But of course those peaks weren't going to climb themselves.
As I gained altitude, I tried to find a way to optimize the route to avoid any rock but also keep out of the wind. That was interesting. 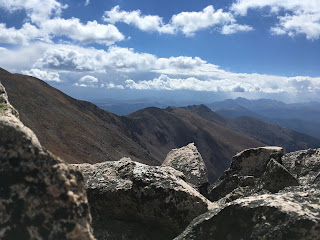 Looking south from the summit. 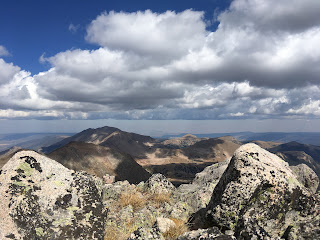 And back to the north.
I descended towards Clark Peak, taking the path of least resistance, which put me full in the wind most of the way, though I was eventually able to cross a small rock rib. This made the movement more difficult, but at least I wasn't in the wind! 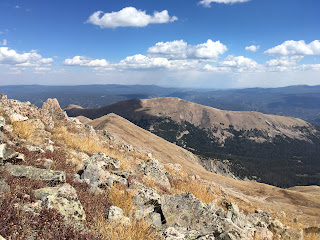 To Cameron Peak from near the summit of Clark Peak.
After visiting the summit, I headed east just a bit and found a nice sunny spot out of the wind. I was cold, right on the edge and also wearing every piece of clothing I'd brought for the day. I felt tired after the early wake up, and was not super enthused on the idea of continuing on. In fact, that east ridge towards Cameron was looking quite appealing. I could take that to descend to the pass, hit Cameron, and call it a day. I even decided to do exactly that.
But I sat a bit more and looked at the map. If I didn't do peak 12386 today, it didn't look like there was any easy way to get to it by itself. It looked like the Mongomery Pass trail would be an option, though not a short effort for one thing. Sawmill Creek was another possibility, and the most direct, but it looked like that ended in the trees well east of the summit. More bushwhacking for one thing.
I came to the conclusion that the easiest approach was from right where I was at- maybe twoish rolling miles stood between me and 12386. I could stay down east of the ridge as much as possible to avoid the wind, and my mood had improved dramatically as I warmed up in the sun and had a snack.
I'd already messaged my wife that I was turning around, now I messaged her back to say I was just kidding and was going for it. As it's something I like to do for motivation, I set a goal of one hour to get to 12386. 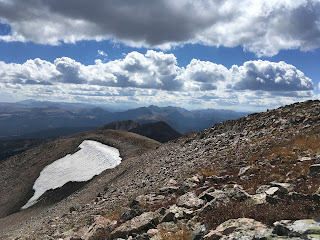 Looking south.
I let the wind carry me at times, and fought it at times, but I also warmed up with the lower altitudes ahead. Along the way I passed a large cairn on the summit of unranked Pipit Peak, stopping briefly. 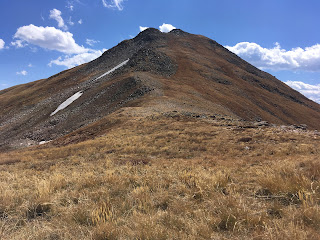 At the base of 12386 from the north- aim between the two humps visible at the top, the true summit is beyond those.
The final climb went quickly, though the wind was inescapable. 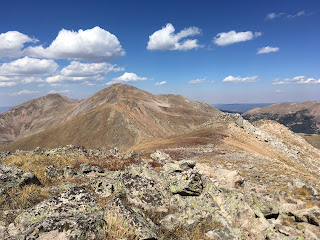 Looking back to Lewis and Clark.
This small summit had been visited more than I expected for a random not easy to access 12er. Besides the usual suspects, a number of people with Gnar Runners in Fort Collins had signed in, coming over from Montgomery Pass.
Along the way to this summit, I was constantly checking out the terrain to my east. I'd originally planned to climb back north along the ridge from 12386 towards Clark Peak, and drop into the drainage where Fall River starts. This would also put me north of the ridge extending east from Pipit Peak.
After checking things out, I decided that option didn't necessarily look any better than just heading east from the saddle north of 12386, contouring around the ridge to the north and going over when appropriate, and then generally trending northish until I hit the Blue Lake Trail. Plus I was out of water again, and the small lake below me was looking mighty appetizing! 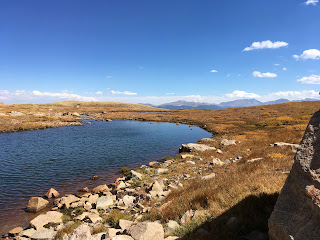 And it was!
From here, I headed NE until below the ridge. Upon reaching it, I kept looking for a way up and over, but in studying the terrain and the map, I could see no benefit in gaining elevation, and continued at around 11100 feet until I topped out the ridge, and started down on the other side.
Things look bad here, lots of forest and no trails. But movement was surprisingly not too bad at all, thanks to various animal trails and open avenues that allowed me to head north.
At one point it seemed like things were getting a little steep and rocky, so I descended about 200 feet before continuing on. Eventually I came to a series of pleasant meadows, with some views of Cameron Peak to the east. 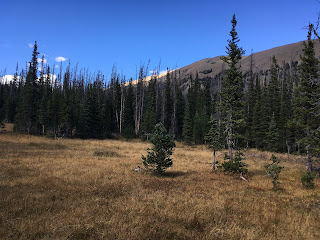 It wasn't long after this before I arrived at the trail.
I stopped for a short snack break and then started up towards Blue Lake. It was nice to be back on a trail again, as it had been almost 8 hours.
As I headed up, I was doing the math in my head. It would probably take me at least an hour to get to and back from Cameron Peak from the western saddle. Then maybe 2ish hours to the trailhead, and 2.5 or so to get home from there. 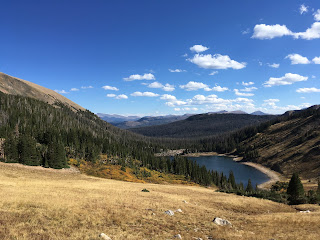 I sat and looked at Blue Lake below, taking in the views until the group I'd passed lower on the climb nearly caught up to me. It was 4pm and while I wanted to do Cameron, and it made alot of sense to do so now, it also made sense to just pack it in and make some of the drive home in daylight at least with sunset shortly after 7pm. 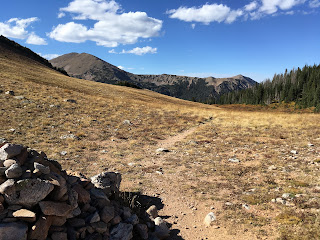 Looking west from the saddle. 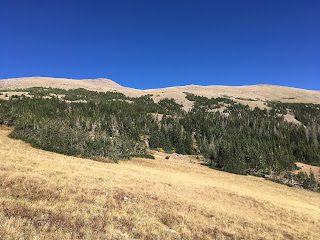 Up to Cameron.
I guess it would've been easy to just go hit Cameron and make the entire drive back in darkness, but I already started forming a plan to visit it and some of the others next week. As long as it didn't snow!
I started the jog back, met by immense beauty within a few steps. 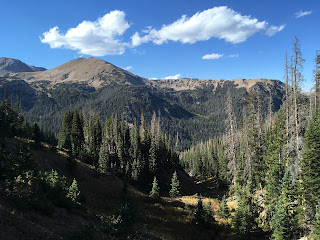 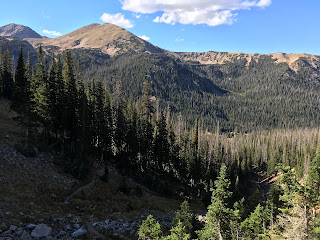 Scenery: pretty okay.
While I'm sure the many switchbacks between the saddle and the intersection with the West Branch Trail must be some sort of are we there yet purgatory to climb, even at an easy jog the descent was quite fun and roller coaster like.
I continued on the trail, passing the intersection with the Rawah Trail where I'd broken off that morning. I jogged most of it, but walked some of it. The scenery up here is really too good to speed by, and it's nice to slow down and take some of it in. 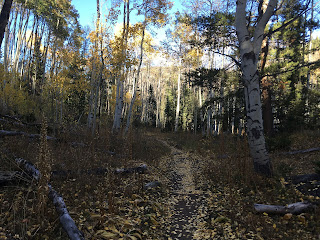