I guess now is as good a time as ever to get caught up on some trip reports. 2018 is quickly coming to a close, but even at this point I've visited more peaks this year than ever before. I entered the year with a plan, which was to try to take as big of a bite as possible out of Larimer County, finish Roosevelt National Forest, and hopefully finish Larimer and RMNP next year on the same summit. With the race I signed up for being a pretty big effort, I also wanted to focus on days that would have alot of elevation gain relative to the distance, and days that would have me spend alot of time on my feet. I like doing long, adventurous days, and I've detailed some of those here already.This was one of my last bigger days before the race, done with my friend Dave. His primary goals were peak 11667, above Kelly Lake and in Jackson County, and the unranked Mount Ashley. He quite wisely suggested adding on the ranked Island Lake Peak, as that would ease my future days in the area (or so he said, and he was right!).We met at an ungodly hour in Fort Collins, and started the drive up to State Forest State Park. He took the drive both ways and I got to play the role of deer spotter. It's funny that I'd never been up the Poudre until the Never Summer 100k last year, and now I've been up it so many times it seems like I have every curve memorized.We started from Ruby Jewel, also important to take his SUV up vs my car as I'm not sure it could have gotten up the road. The first bit was on a progressively rougher jeep road, and we talked about if we could've made it farther up or not. Not that I minded a slightly longer hike.All of our on trail time would cover the same ground as the NS100K, and I made sure to take some time to enjoy the scenery, as I felt like I didn't do that much last year. We reached tree line, and were provided some great views in all directions. 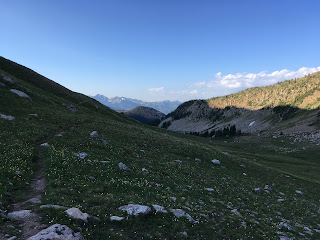 South down the valley. 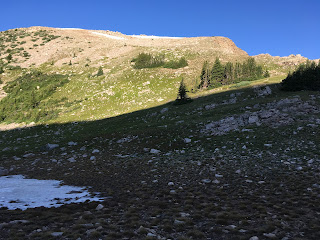 And up to 11667.
We left the trail and found a way up this slope. It was pretty easy going really, especially compared to what would come. We topped out and headed south to the true summit. 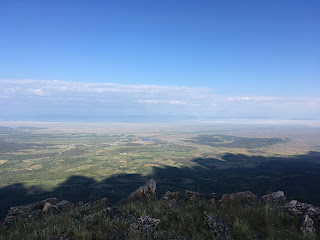 Great views to the west were enjoyed.
It was pretty neat to still be in the shade of the taller peaks to our east. We headed back down the way we'd come, ending up in the saddle over Kelly Lake. 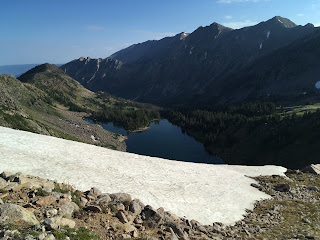 Quite beautiful.
We'd stay on the trail toward the lake for a bit before cutting east towards Island Lake Peak. Funny, I was feeling a little pensive here, as this peak is third class, imposing looking, and it had been a bit since I'd done any scrambling.
Some large talus and rock hopping led us to the base of the ridge between Mount Ashley and Island Lake Peak. We faced a choice here, with two obvious gullies up. We'd ready the trip reports, but couldn't remember if it was the north or south gully to take. Neither really looked great, so we headed up the south gully as we were closer to it.
Looking back, this gully bore obvious signs of recent rockfall- namely that the corners of pretty much all the rock in the area looked to be a powdery, lighter color than the rock itself. That happens when rocks fall and bash into each other.
It was a little sketchy at times, but we were fortunately very close to the top when Dave kicked a rock loose, which we heard tumble down the slope and initiate a pretty substantial rock slide/fall below us. That was a little scary, but we were nearly on solid ground. 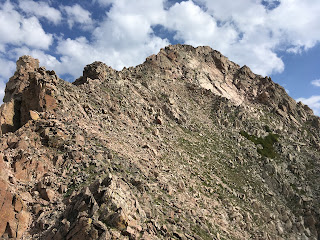 Topping out and looking north along the ridge to the summit.
The rock from here out was solid, the route finding fun and engaging, the company great. You'll want to cross over to the west side after the obvious tower, and will have to eventually if you want to keep it under fifth class, or stay on the ridge as much as possible to enjoy the scramble. 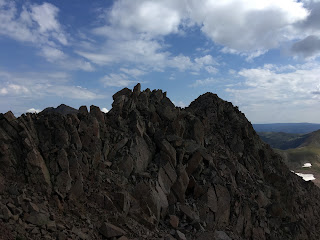 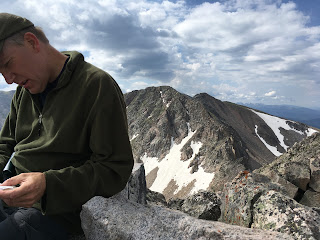 Dave signs in as I look to out next and last peak of the day. 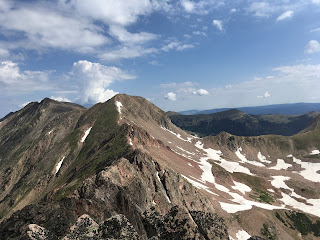 North to Rawah Pyramid and Snowbank Peak (made a dumb mistake on that one, trip report forthcoming). 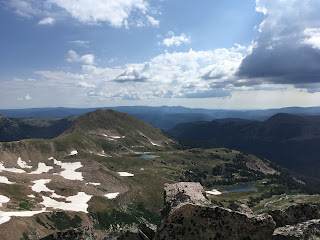 East to Dodad Peak.
We had a not great weather prediction for the day, but things were looking good so far.
We wisely decided to take the northern most gully back down. There was some loose stuff here and there, but nothing like we'd encountered in the south gully. 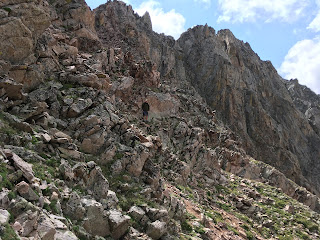 Find the person on the east side of Island Lake Peak.
The rocky terrain didn't relent as we headed back south toward Mount Ashley, but we were finally able to get into a grassy area to move a bit quicker. 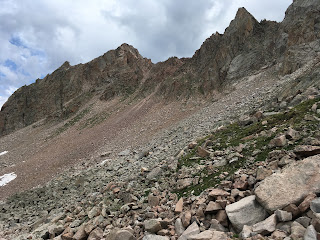 You can see the result of the rock fall we'd initiated here, all the powdery looking stuff at the base of the gully. It definitely didn't look like that on the way up!
We sat for a snack and looked at the terrain ahead. There was a pretty obvious gully ahead of us, and it looked fine- great in fact, compared to what we'd previously done. It was fun, very solid rock, and reasonable movement. It was a short stretch to the summit from where we kicked out. 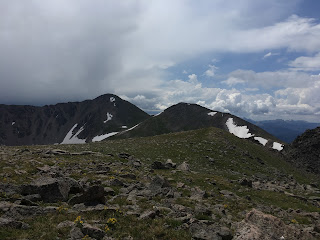 South to Lewis and Clark. 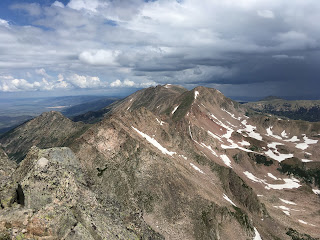 And north back to Island Lake Peak.
Note the incoming weather to the east… We had earlier talked about visiting Lewis and Clark before dropping down to Jewel Lake, but the weather definitely wasn't looking like it would cooperate. 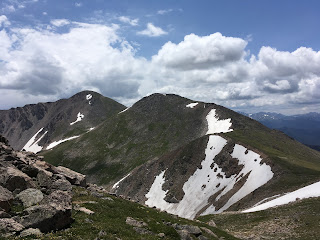 Lewis and Clark.
The way ahead was clear though, so we kept on. But as we got closer, it became pretty obvious it wouldn't be an option to do both due to the weather. Dave suggested just visiting Lewis, but I was pretty keen on pairing them up, and I'd have to go pretty much all the way back anyway to visit Clark, so we started to descend west. 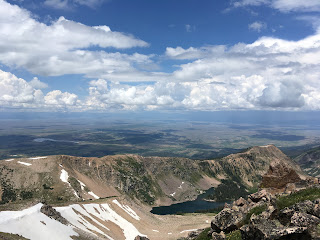 11667 and Kelly Lake.
We descended the pleasant, grassy hillside back to meet the trail we'd come up. 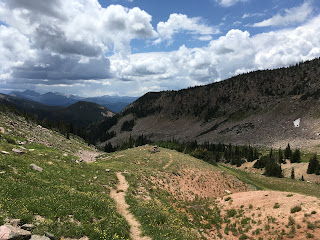 Looking back down, now with some weather inbound. 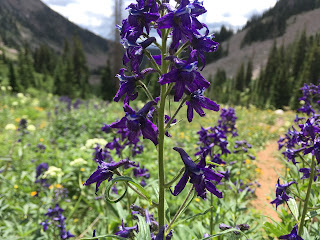 Lots of beautiful wildflowers were seen. 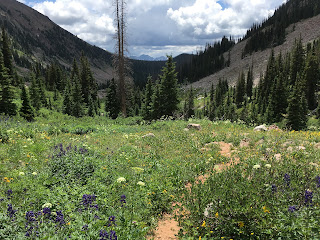 Shortly after this, it started raining.
It wasn't bad at all really, barely enough to warrant rain gear. It was pretty cool to hear the thunder echoing down the valley. I felt briefly wistful about missing the sign up for the 2019 NS100K, and wished I'd been more on top of things, but in the end I am pretty happy to have went to Ouray instead.
We got back to the SUV, and started driving down. We'd also talked about maybe visiting one or more of the lower peaks in the area if we had time and want, and we had both. We decided on Bull Mountain, pretty easy by any stretch, particularly so as we could drive most of the way up it.
It was just a short hike off trail to the summit area, though it was one of the flat and broad ones, and did not have a cairn or any other marker we could find. 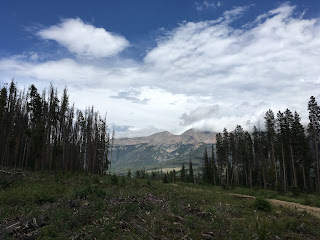 Where we were not too long ago, now completely engulfed in clouds.
We made the short hike back to where we'd parked, and started the long drive home. Thanks to Dave for making the drive, as I was pretty tired and had some trouble keeping my eyes open.
This was a pretty awesome day, and a great intro to the peaks in the area. As Dave suggested, it was a smart move strategically to visit Island Lake Peak with these peaks, as it is the only thing on the ridge that is more technical and difficult to visit versus the much easier peaks around it. If not for this one, you'd have nearly 30 uninterrupted miles of rolling peaks from 10833 in the north to South Diamond Peak in the south, with much of that above treeline. It made sense to plan for this day and the more time consuming movement that came with it to facilitate later days in a more timely manner.
And later days would come.
Link to hike map/GPX on Caltopo(in red).
The Rawahs Part 1.
11667: 4.4 miles, 1998 foot gain. Second class. Moderate.
Island Lake Peak, 12220 feet: 6 miles, 2551 foot gain. Third class. Strenuous-.
Mount Ashley, 12380 feet: 7.3 miles, 2711 foot gain. Third class. Strenuous-.
As a whole, this day covered 12.15 miles with 5306 feet of elevation gain in up to third class terrain with engaging route finding. Strenuous-.