As we waited outside for our ride at 8:25am the temperature on the store front read +26 degrees Celsius. I was already delayering. I wondered where in this land of paradise would we be venturing to today. The itinerary stated Tre Cime but we saw that area on Tuesday and it was still snow bound. Our guide was to do some homework and come up with an alternative. He met us at 8:30 and declared we were going to Mulder and hike Durrakopf. On board we hopped and went for a drive up a steep, winding, narrow road to a way the heck back and beyond.
By 9:00 we were hiking up a steep, rocky & rooty trail huffing & puffing in the heat & humidity. It was an hour and twenty of this then we popped out of the forest to a forever view. We reached our first summit where there was a cross and a summit register. A wooden box was attached to the cross which held the book and pen. We took a snack break to refuel for the next climb.
After a little down and then a big up, we arrived at the highest summit called Durrakopf. This was a place worthy of an extended visit. We had front row seats for a prime time viewing of hills and valleys and wildflowers and those Dolomites.
As if we had not reached enough summits already, we did another down and another up to capture yet another summit experience. Before reaching this summit, I spied the hutte which would be our next stop. This time I paired a strudel with my beer. Once again, here at the hutte we had a front row seat to breathtaking scenery.
It was time to move on down the trail for an hour to where our ride would meet us. We had wide open views every now and then through the forest that reminded us of still how high up we were. WOW what a day!
There were loads of signs at this trail head and I captured them all. 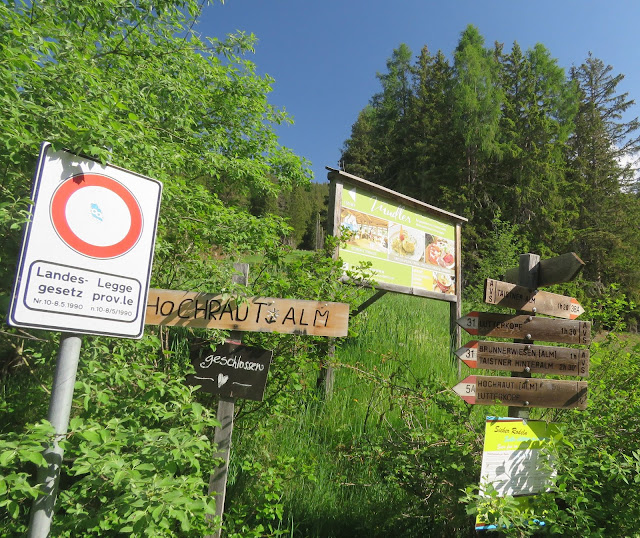 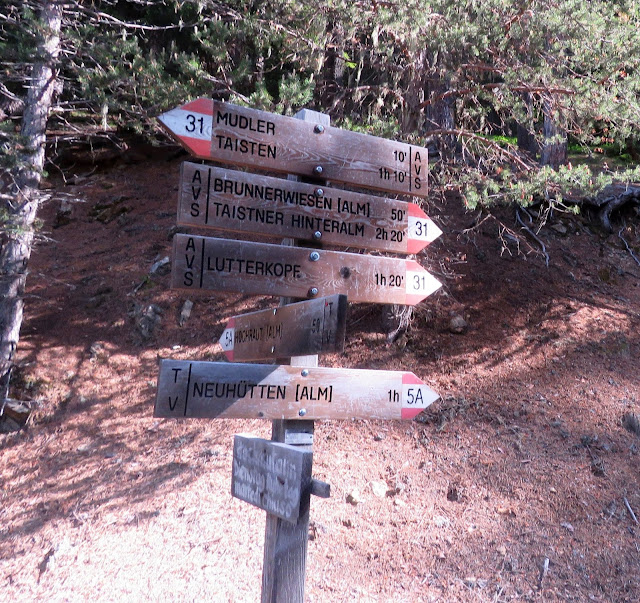 After the steep climb we arrived to our first wide open view which was amazing. 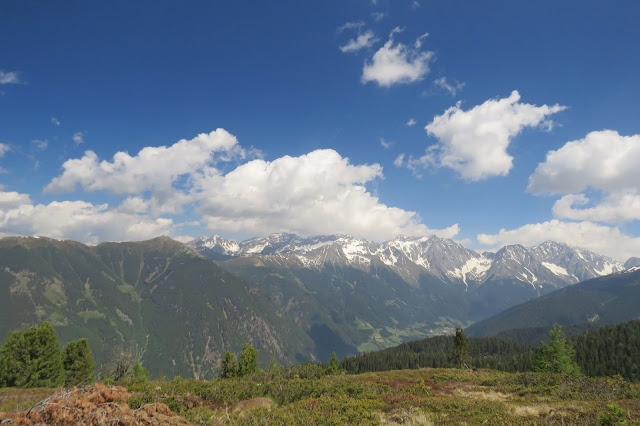 our first summit of the day 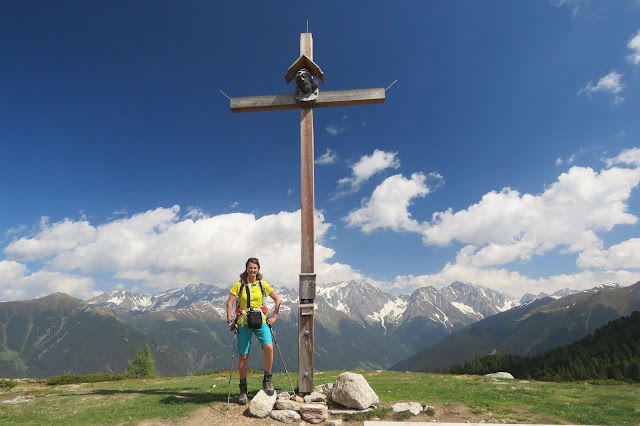 Our next summit is at the top of that foresty knoll.You can see the trail going up the middle. 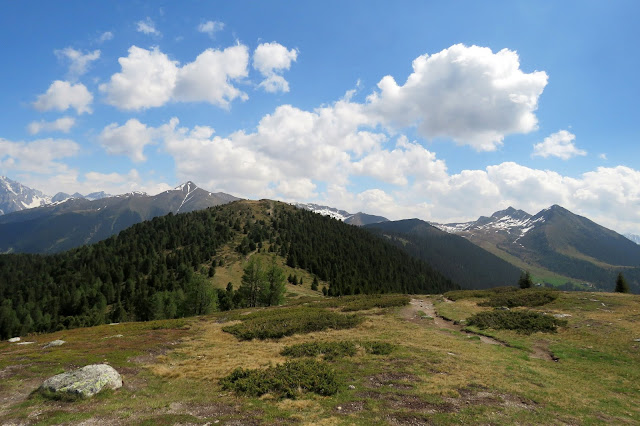 This summit is not named. 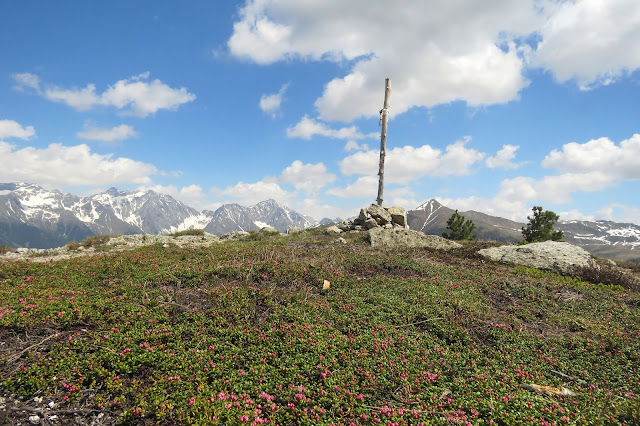 view as we leave the unnamed summit behind 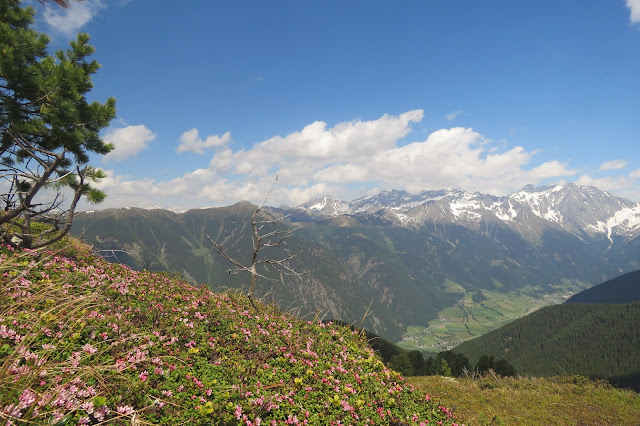 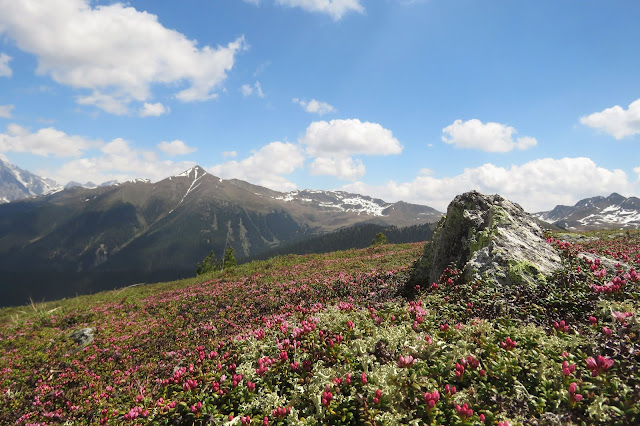 That's Durrakopf on the far left with the cross on top.

feeling all high and mighty on the summit of Durrakopf 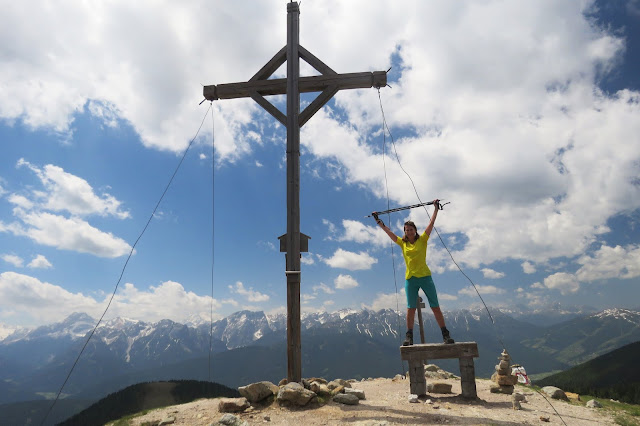 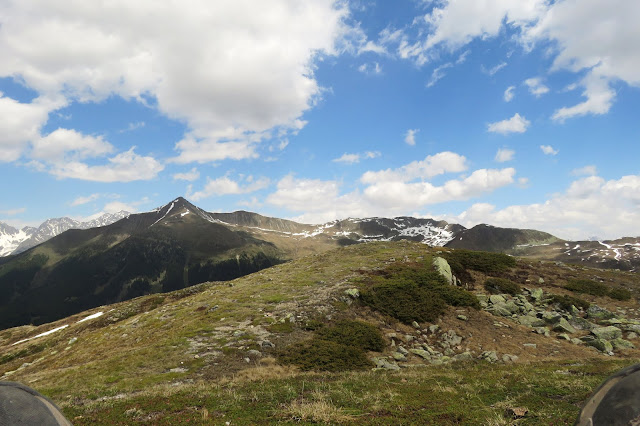 view to my right as I dine 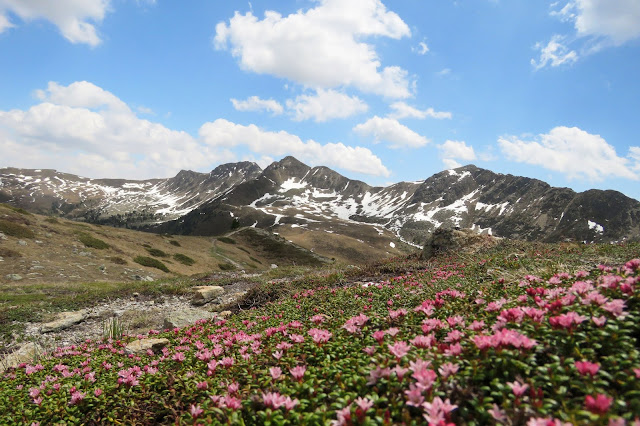 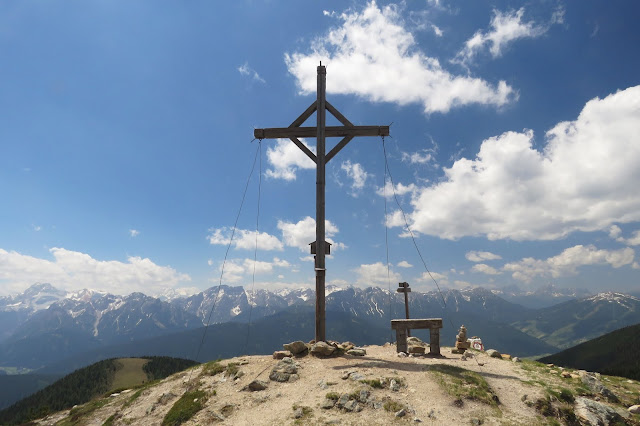 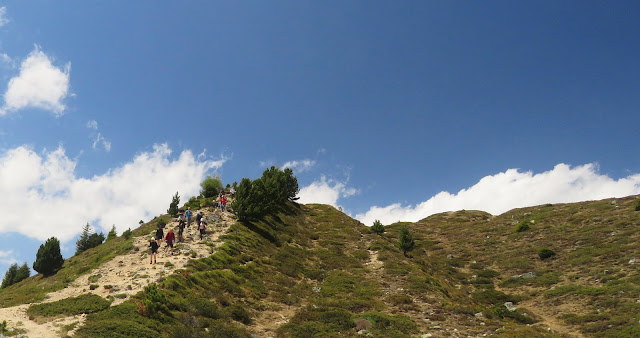 I spy a hutte off in the center of that meadow. 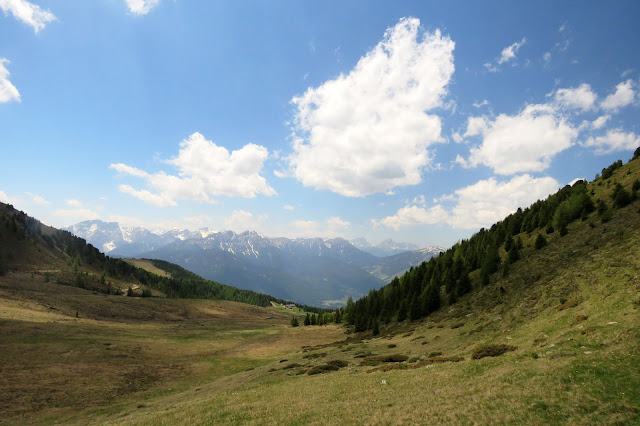 Before going to the Hutte, we opt for another summit right up the center of that grassy hill. On the way there I was dropping low to the ground to capture photos with a flower frame on the bottom. I pointed this idea out and the idea caught on. A few others performed the same maneuver, some even laying on the ground. Our guide had this look and made this sound as if to say what the heck as she got them doing! 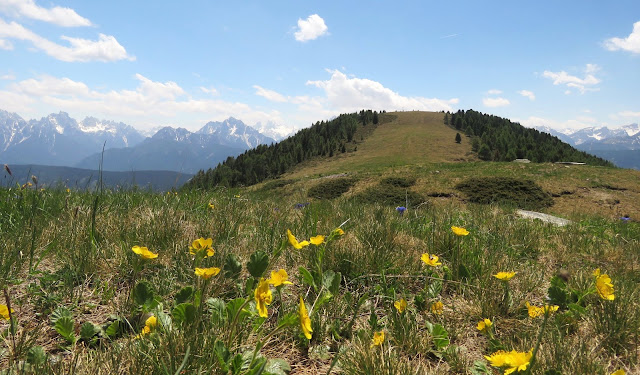 ascending the grassy slope to the final summit 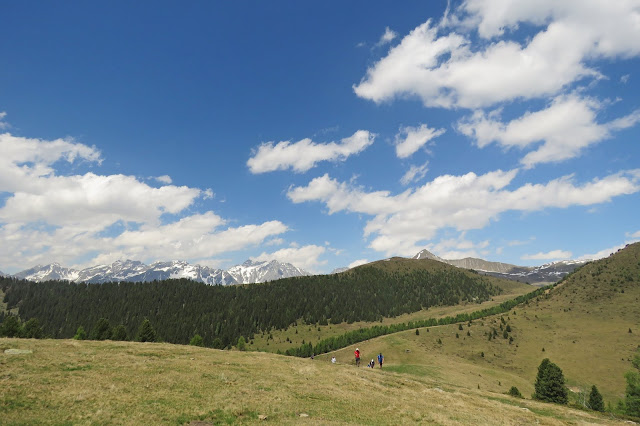 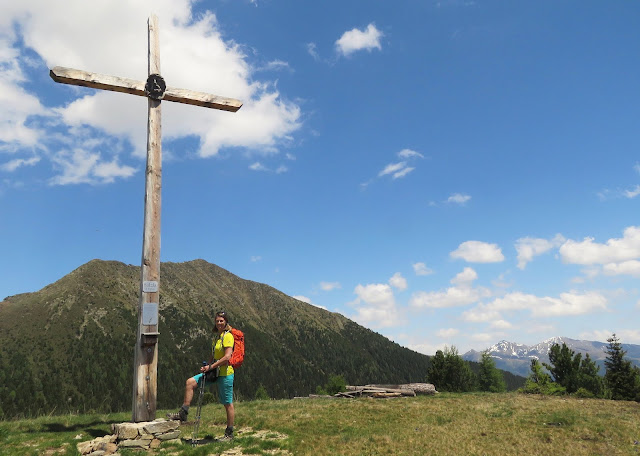 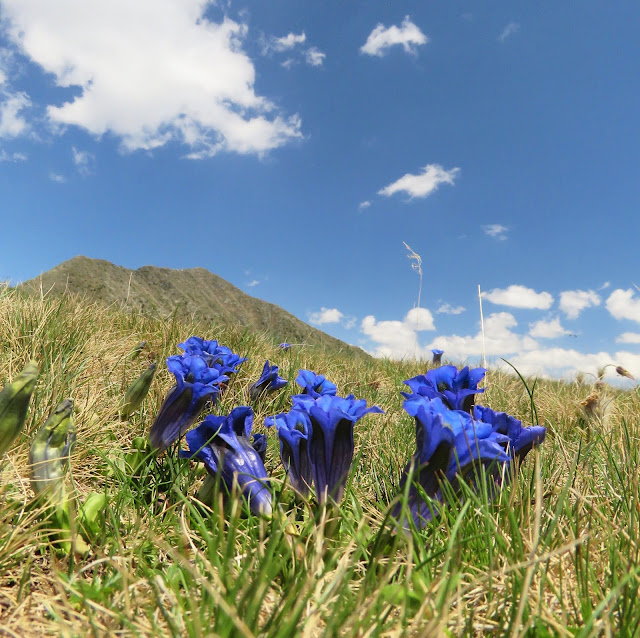 We descended the trail down to the Neue Taistner Senn Hutte. It was time for that well deserved beverage. 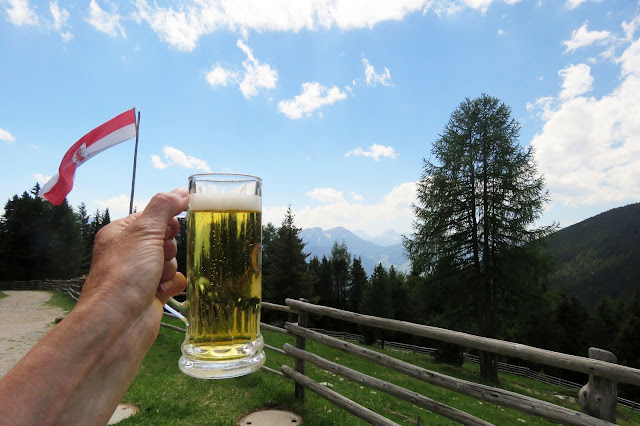 I went for a strudel too! 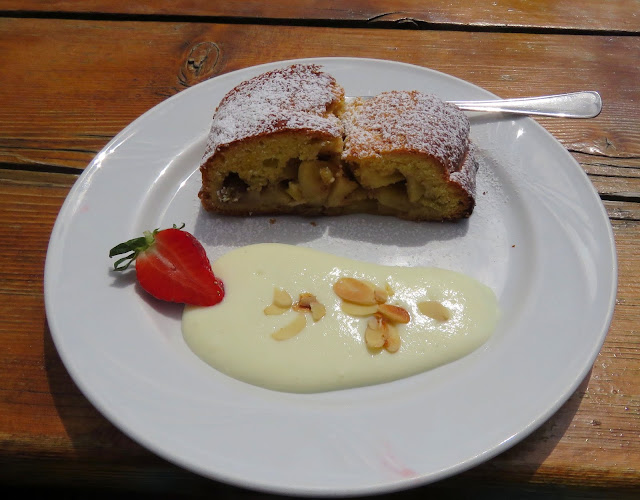 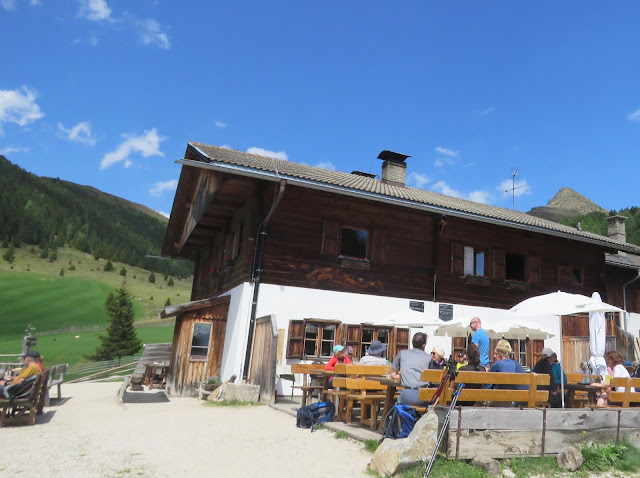 We had a long and winding trail to carry on down along. Every now and then the forest opened to display great views and to show we are still high. 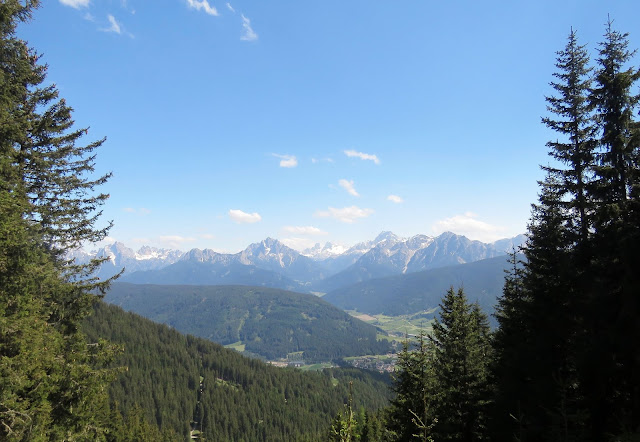 What a day! It was a feast for our eyes! What faced us now was another one of those fabulous decadent dinners that goes on and on and on. These evenings are so enjoyable getting to know each other. I was the only Canadian and I got to share these days with two American sisters, people from Wales, Australia and England. There were loads of laughs to fill the evenings, while we filled up on fabulous food and wine. Each night I went to bed pleasantly depleted and excited for the next day. 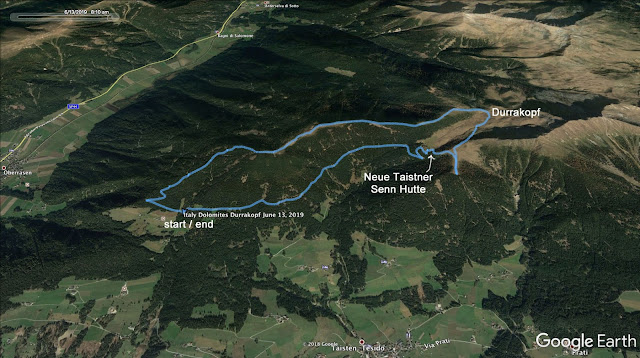