Date of Hike: 2/23/19
Jewell Trail & Snowfields: 3.4 Miles / Mount Clay Loop: 0.6 miles / Gulfside Trail: 0.7 miles / Mount Jefferson Loop: 0.8 miles / Gulfside Trail & Snowfields: 2.5 miles / Snowfields & Crawford Path & Mount Monroe Loop: 2.0 miles / Amoonoosuc Ravine Trail: 3.0 miles
Total Miles: 13.0 (6,228 feet elevation gained) Garmin Forerunner 920XT
Trip Report:
– The previous weekend I took advantage of the nice weather by heading up and down the Ammo to Monroe and Washington, this weekend I went up the Jewell Trail on my way to Jefferson then headed over to Washington and Monroe and down the Ammo.
– The Jewell Trail does see some decent hiker traffic, but not nearly as much as the Ammonoosuc Ravine Trail which also sees back-country ski traffic along with hoards of hikers looking to hike Monroe and Washington.
– I got what I thought was a late start, 8AM, but after a half mile I caught up with two other hikers and then had the whole trail to myself while enjoying an easy to moderate trail breaking ascent to treeline. At treeline I stayed on the trail for a little bit, but I found snowfields off trail a better option and made a b-line up to Mount Clay for some nice views of the Great Gulf and Mount Washington. From Clay's summit I dropped back down to the A.T., ditched my snowshoes for light traction, and made the quick out and back over to Jefferson. I started bumping into a few hikers doing a Presi Traverse on my way to Jefferson and then on my way back along the A.T. around Mount Clay I started seeing hikers every few minutes.
– I put my snowshoes on at this point and made my way up Washington bumping into my friends Todd, Larisa and her two dogs, and Sue & Chris. After catching up with them I jumped back off trail and used the snowfields to ascend to the summit of Washington.
– On my descent from Washington I took a few shortcuts and stuck to the snowfields again. When I passed a few conga lines heading up, all in face protection, crampons, and some with ice axes they looked puzzled/concerned as to why I was off trail and only in snowshoes. It was a little funny as the snow conditions were sometimes much better off trail for safer travel!
– After making it to Lakes of the Clouds and then the summit of Monroe I dropped off onto the eastern snowfields. There is a little chute about fifty yards north of the summit where you can drop in and easily make your way back to the Crawford Path if the snow conditions are right. For the second week in a row there was about a half foot to a foot of powder over crunchy snow, perfect for a fun controlled snow shoe ski descent.
– After hiking back around the "Monroe Bend" along the Crawford Path (A.T.) I made a quick and quiet descent back to the trailhead before heading home, ending another perfect day in the White Mountains. 🙂 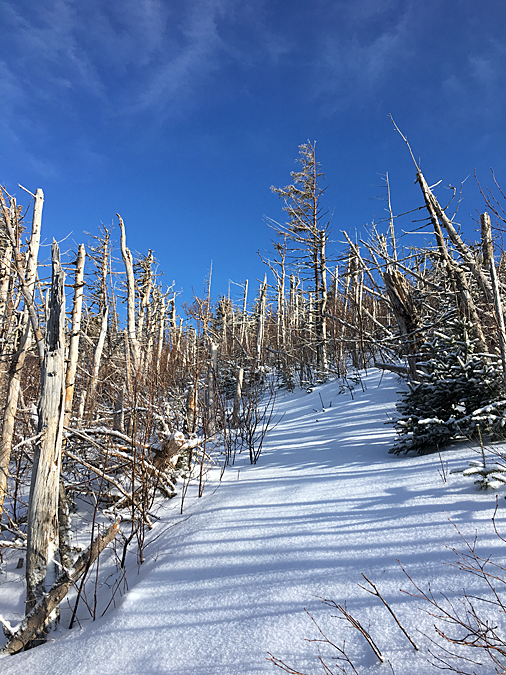 Hiking up the Jewell Trail. In the winter/snow it is a much prettier trail below treeline 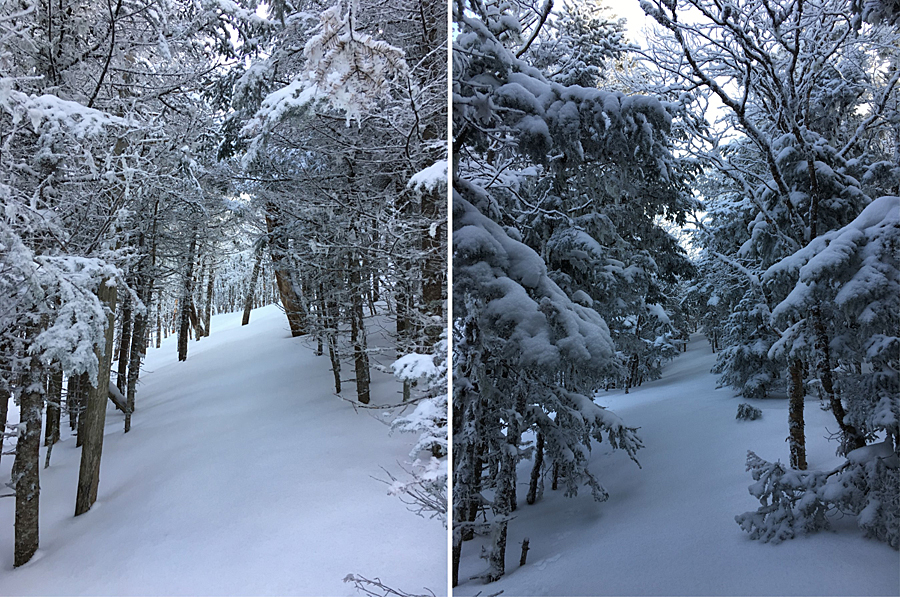 The trail corridor is very well defined, although it gets a little narrow in spots 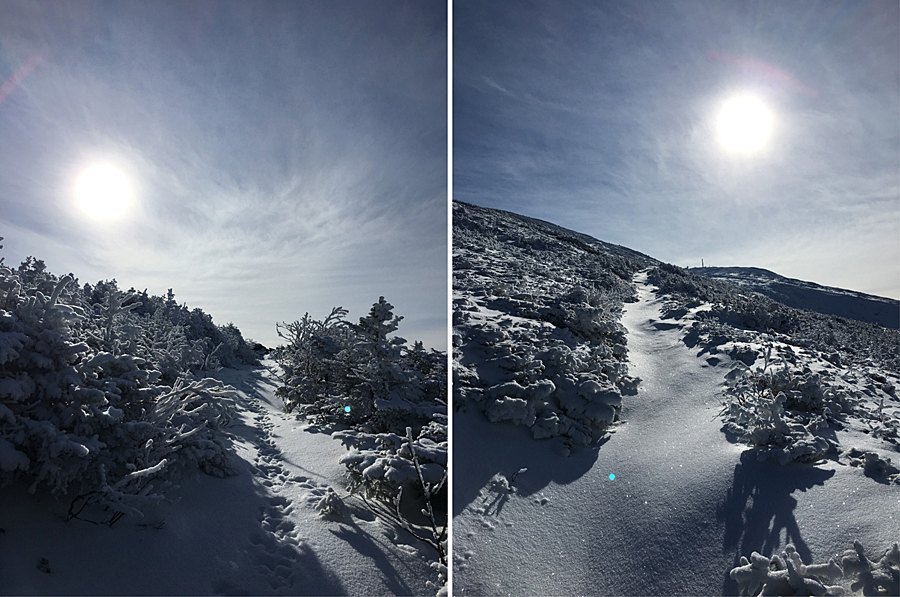 Breaking above treeline and taking in the sun's rays 🙂 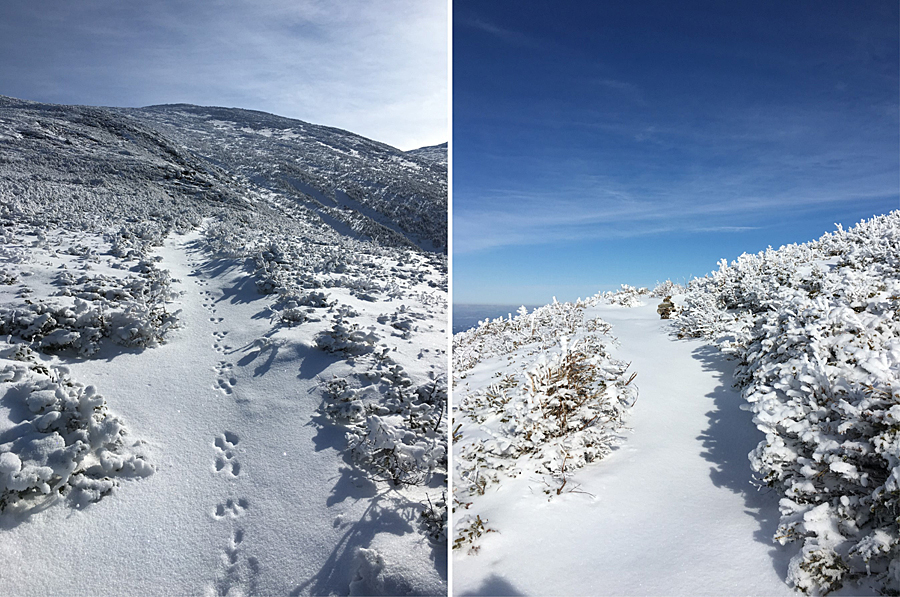 I got to follow some footy tracks above treeline for a little bit! 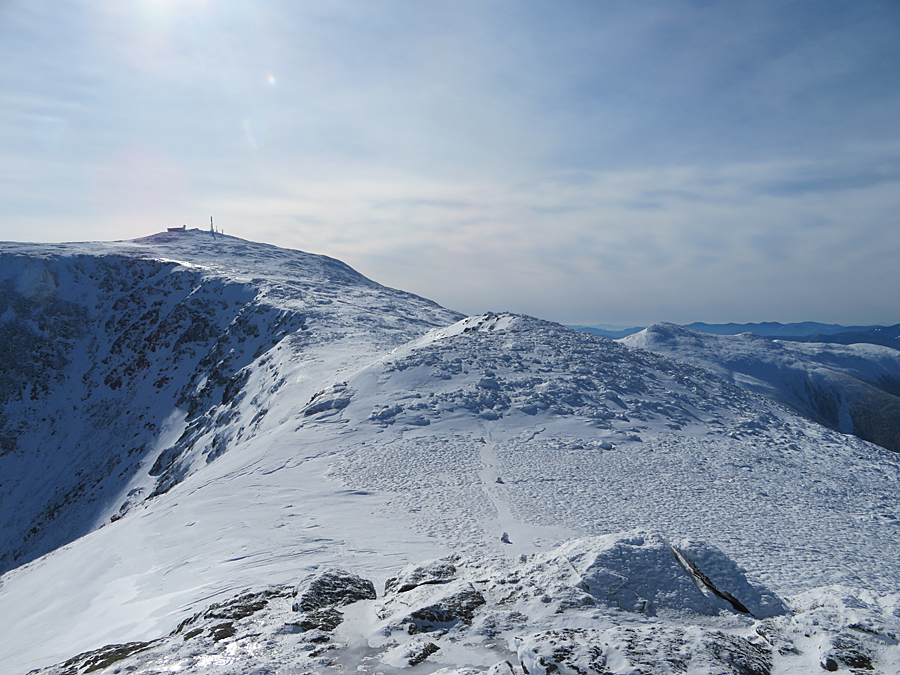 Just south of Mount Clay's summit, looking at another bump of Clay and Washington and Monroe 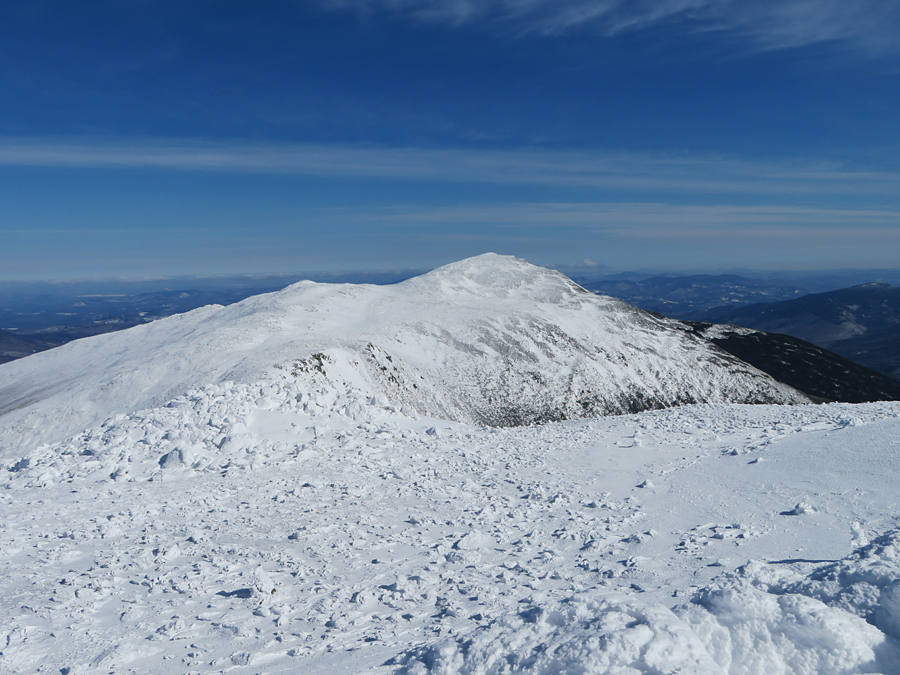 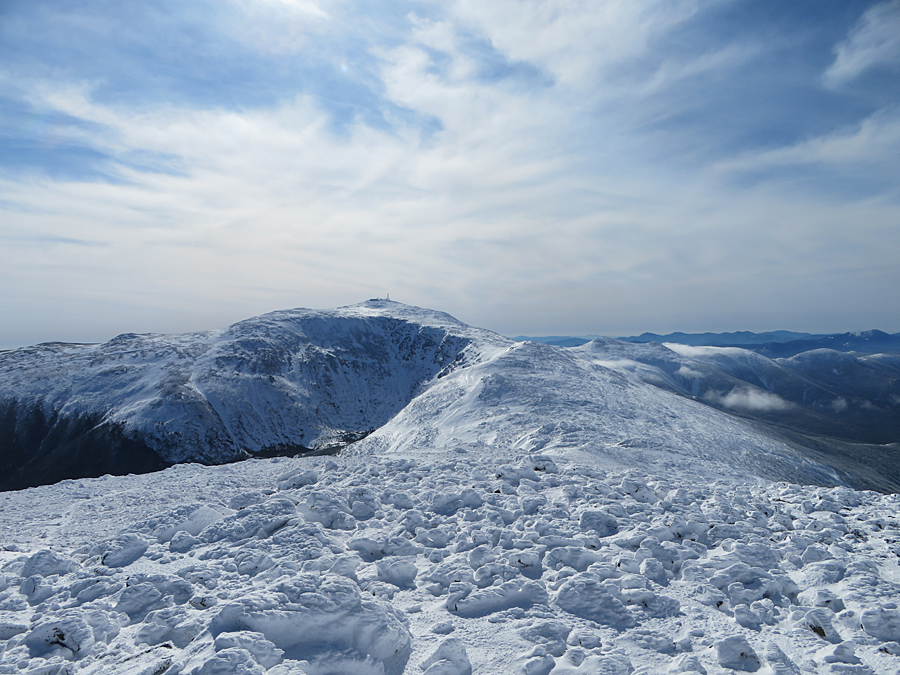 The boulders are covered in rime ice and snow, making for a much softer look to the rock field of the northern presi's 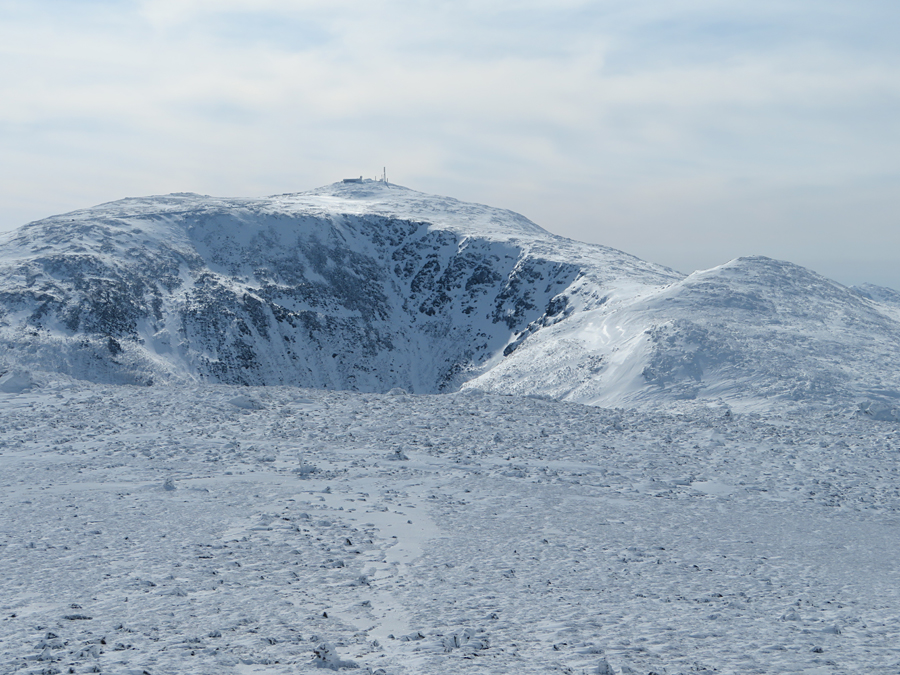 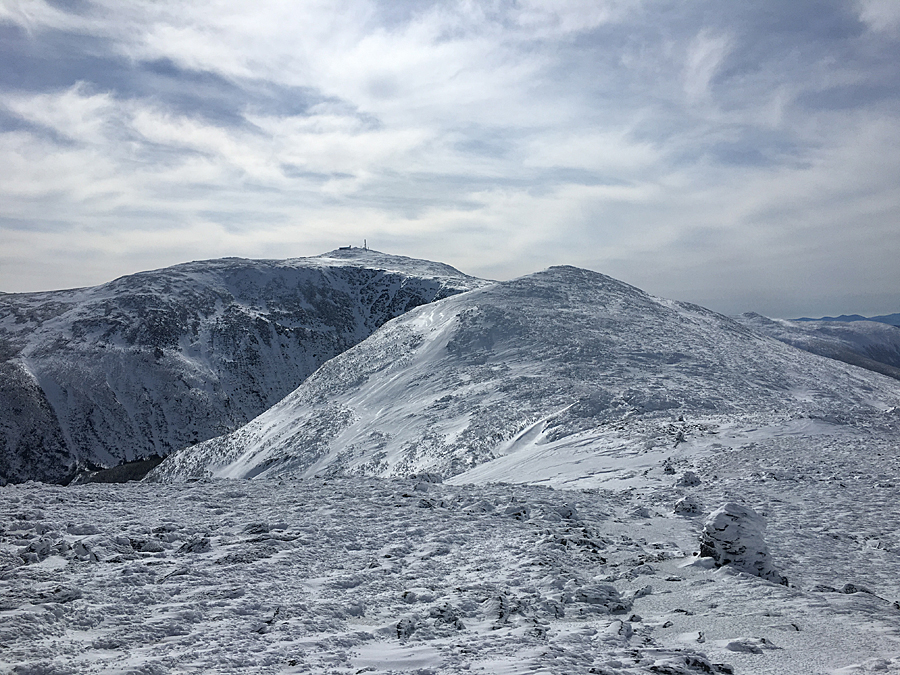 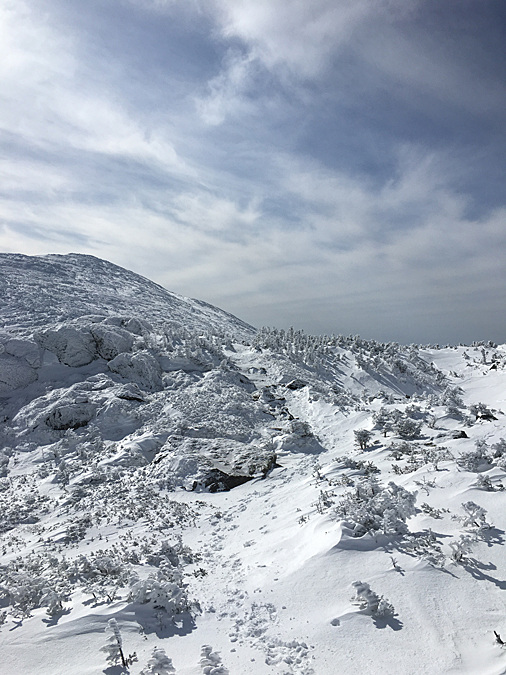 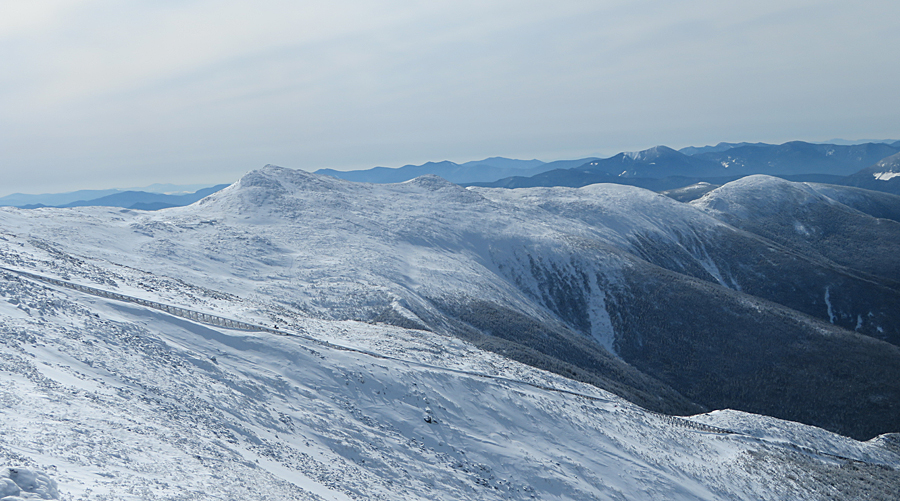 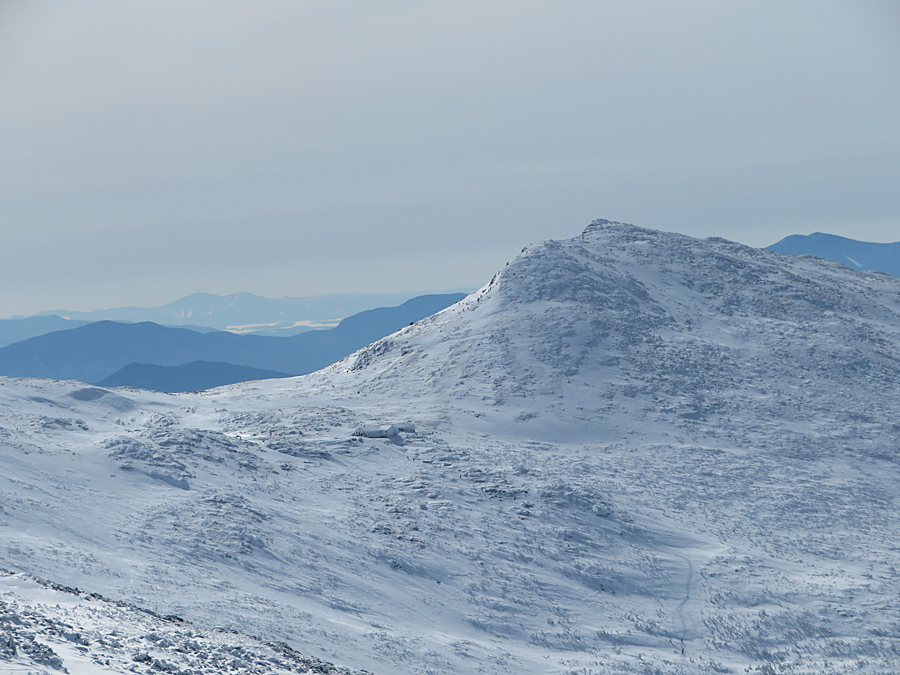 Lakes of the Clouds and Mount Monroe zoom-in. If you look close enough you can see a few hikers ascending the Ammo, they look like little dots! 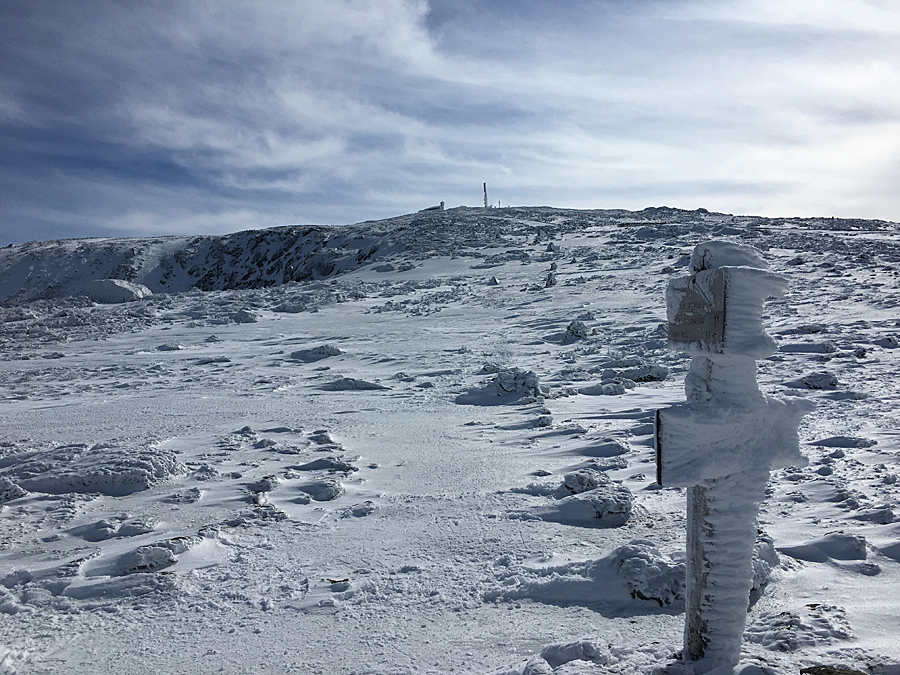 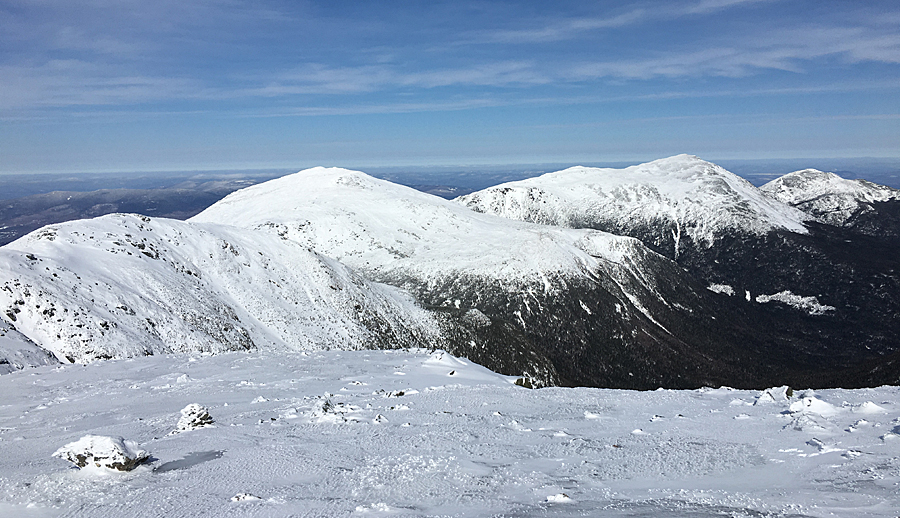 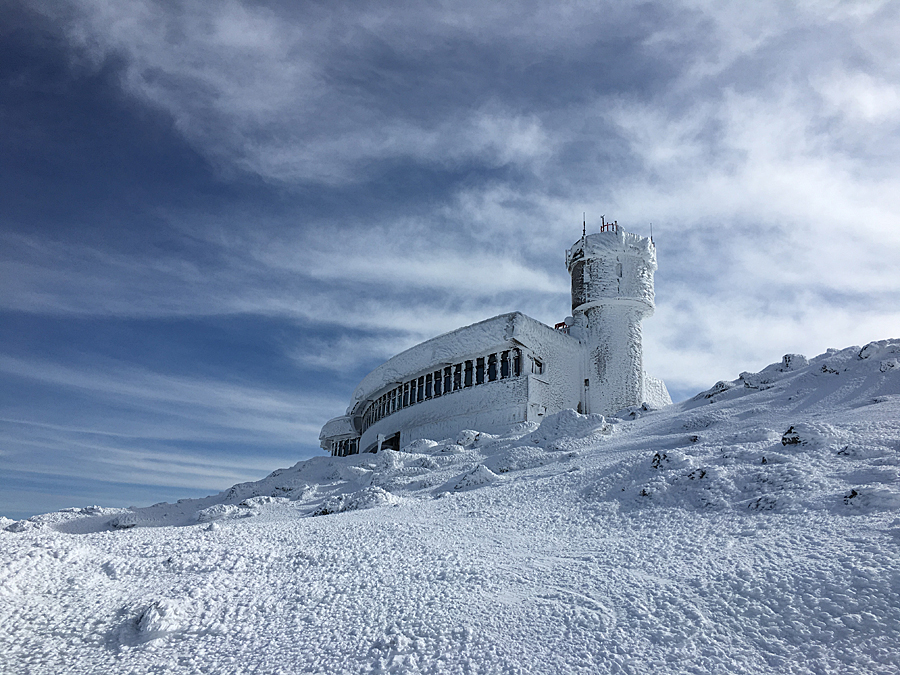 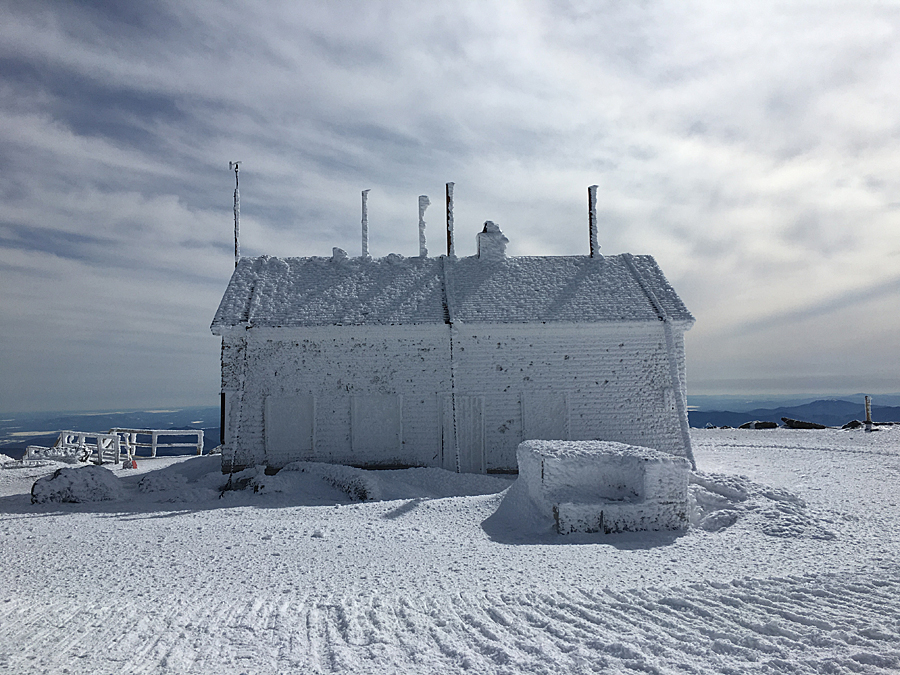 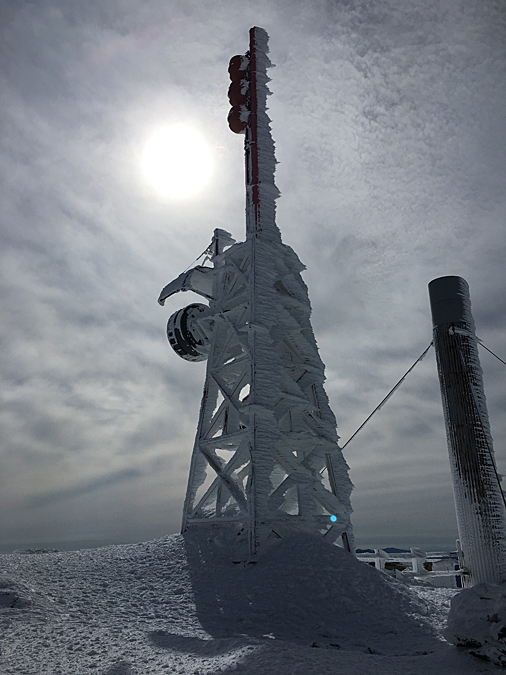 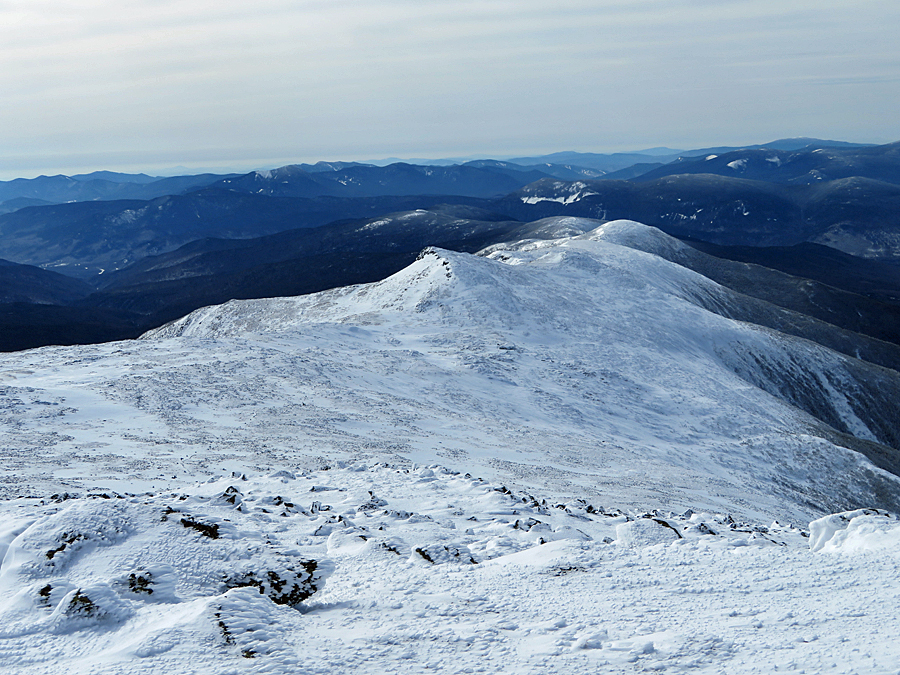 Heading down towards Lakes and Monroe 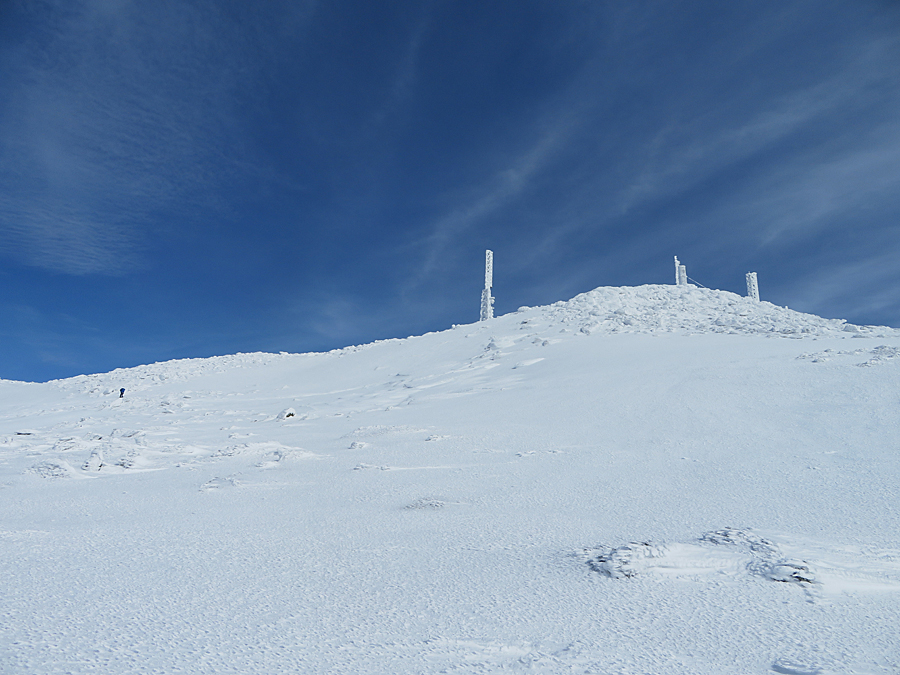 Looking back up at the summit, I came straight down, the trail is off to the left and swings to the right higher up towards the tower 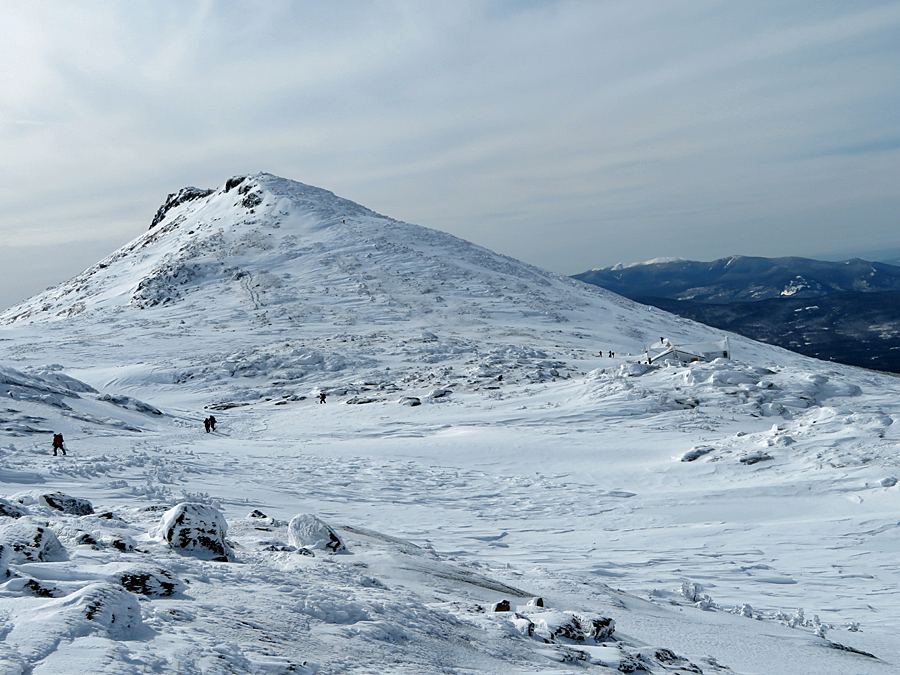 Lakes of the Clouds and Mount Monroe 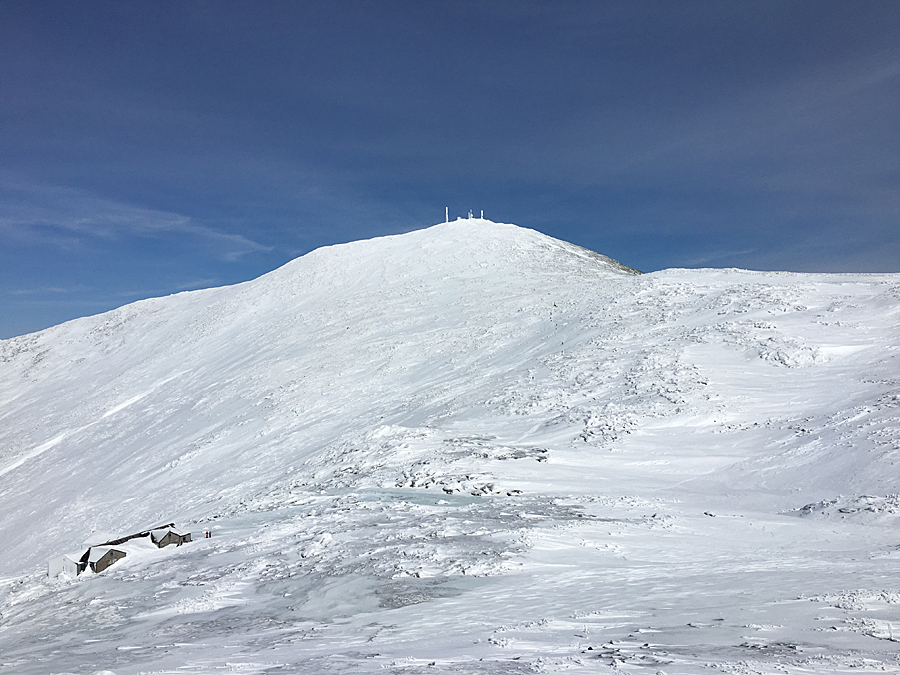 Lakes of the Clouds and Mount Washington 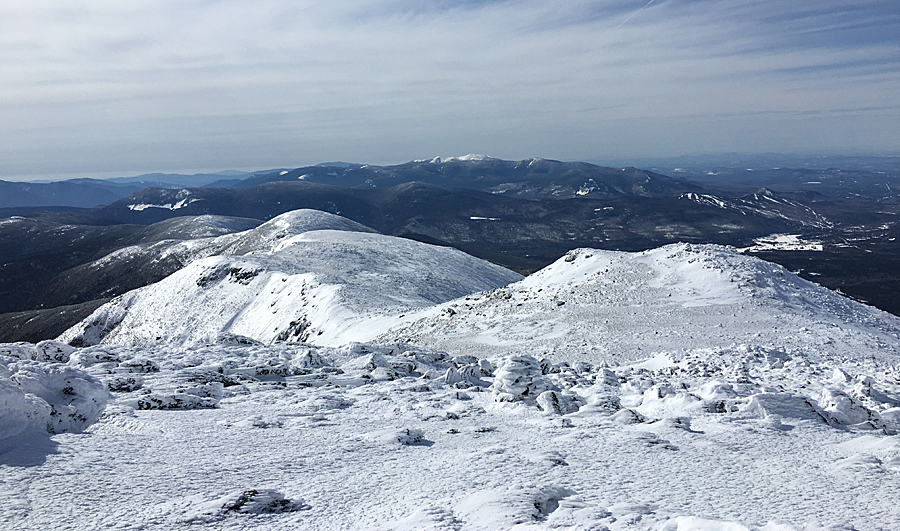 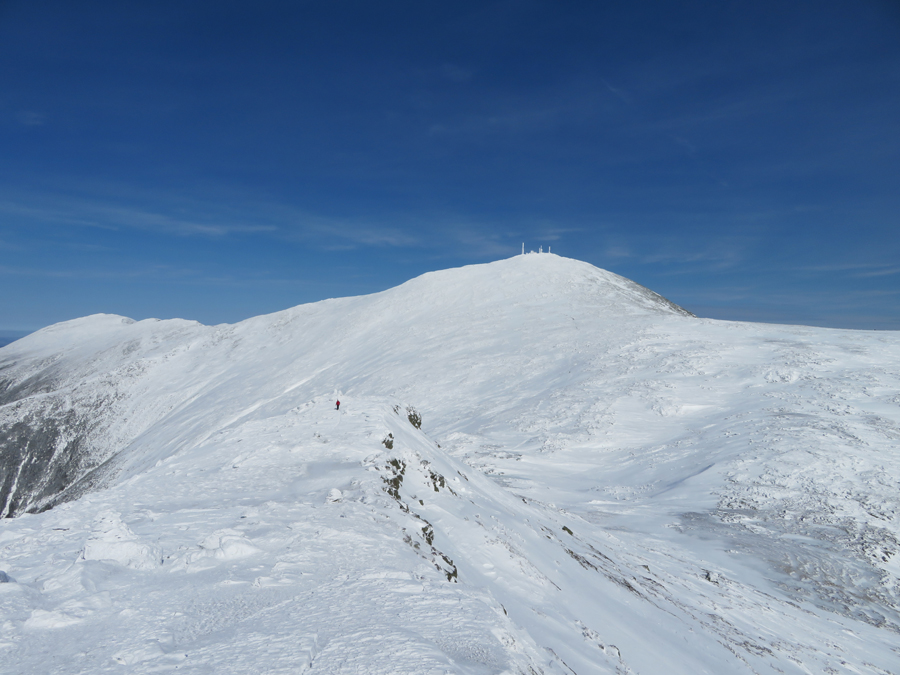 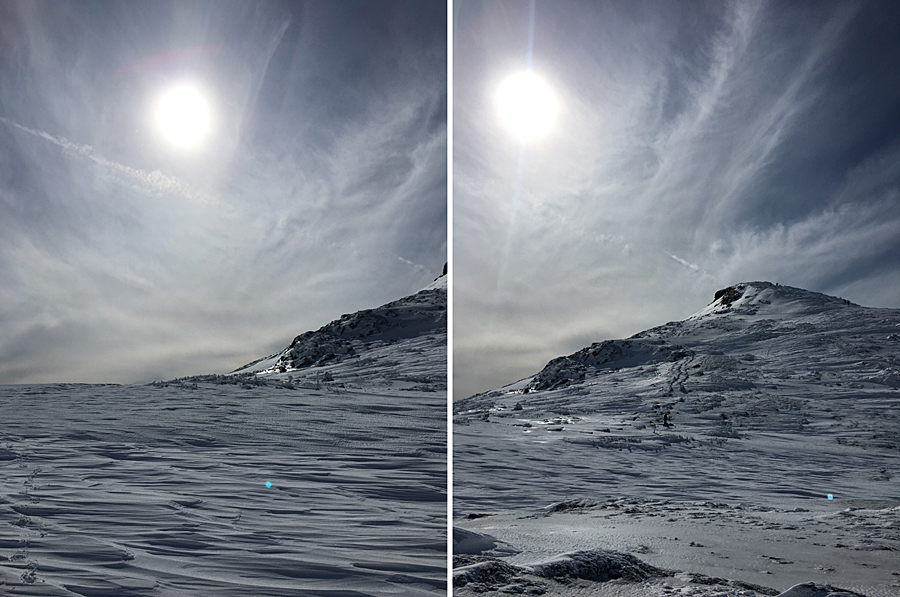 Pano of Lakes of the Clouds and Washington 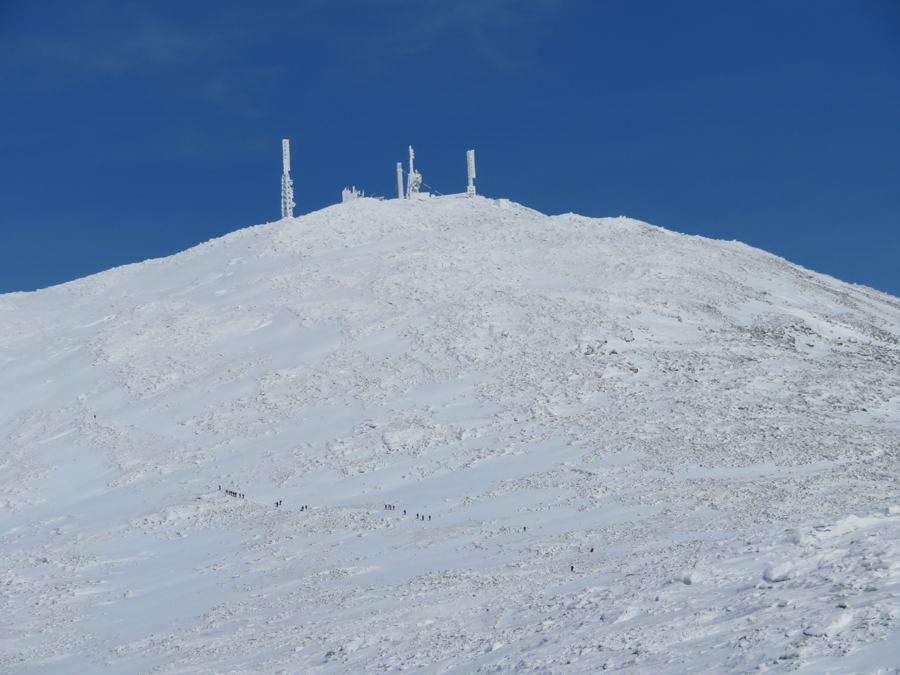 Zoom in of the summit cone, a few conga lines of hikers can be seen! 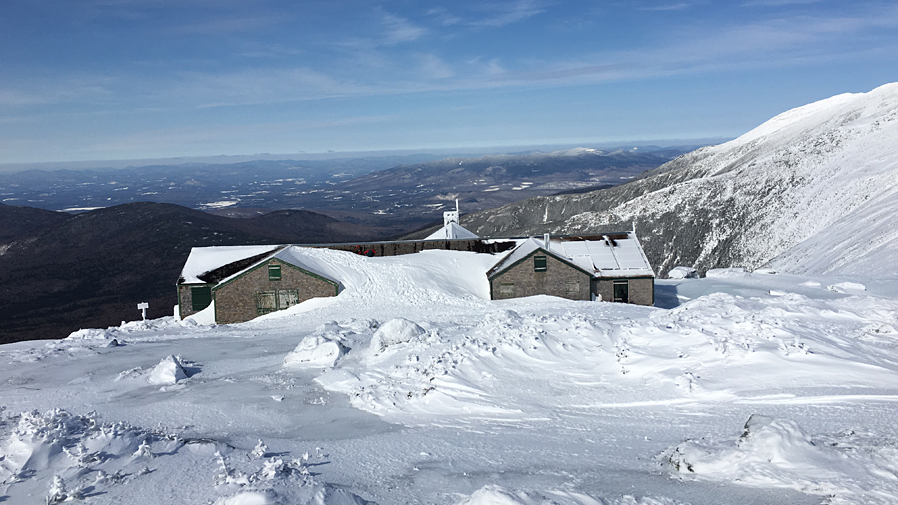 Buried Lakes of the Clouds Hut. 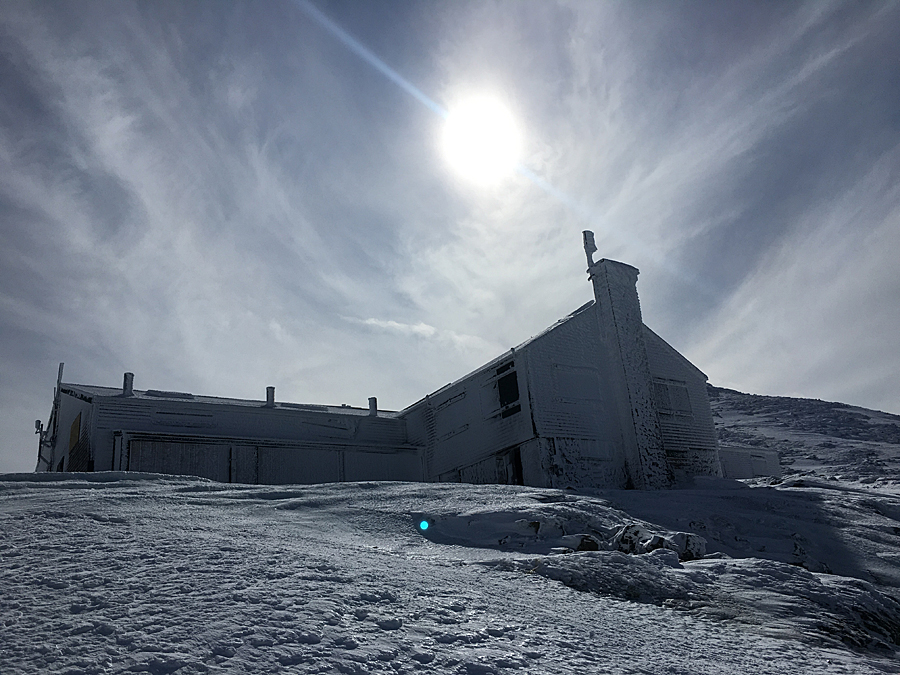 Looking back at the hut as I descend 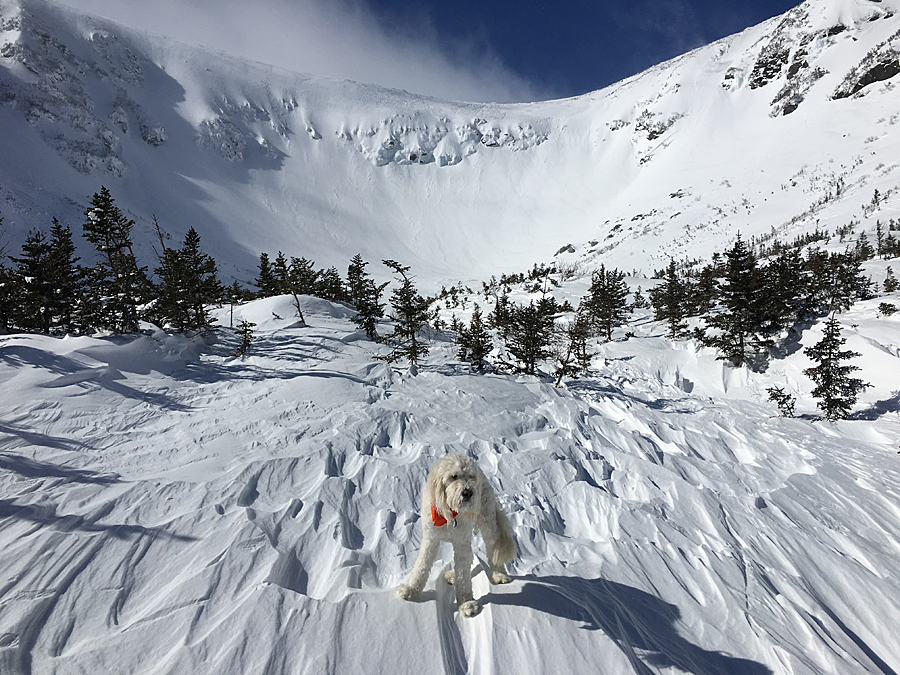 Sarge in charge! Sarge likes to hike too, here he is the day before venturing into Tuckerman Ravine! He has an Insta-face account, which can be followed here sgt._pepper_goldendoodle