As soon as we got out of our cars on Lee Canyon Road, we knew it was going to be a great day for hiking! We had just passed two horses … in the middle of the road … and there was a family of three burros that had been saving our parking space! We watched the baby burro trying to keep up with Mom and Dad and they disappeared up toward Lower Lee Meadows. We had parked on the side of the road just below the traffic circle there. The temperatures were set to perfection. And, we could smell breakfast in the air from the campers residing in the Old Mill Picnic Area … yep, campers in the picnic area. Maybe they opened it because of the crowded holiday. IDK

Anyway, it smelled really good as we started up the paved road past the large and still new picnic area. We were fifteen strong today.

Just past the bathrooms that are right by the main road, a stone-lined trail forks off to the right. This is the Old Mill Trail. And, we started up.

Next, the Old Mill Trail veers off to the left and our trail, the South Sister Trail, forks to the right into a pine glade. This glade used to be home to a mill worker's family. There is a spring in the area above with a pipe that runs down to a small old home foundation. The spring was visibly pooling above ground today in the lower canyon wash. The trail up through the canyon wash is easy to follow. It is one of my favorite trails because it winds through a forest of pines and aspens on what is, at first, an easy slope. Just as you are lulled into the magic of the scenery, the trail begins a steep ascent. It becomes steeper until you finally reach the popular trail junction of South Sister Saddle.

However, we chose the right turn balancing the ridge up to a second saddle area. This is a steep climb as well. And, even though there is a vague trail, everyone seems to have their own way of tackling the climb.

The climb to South Sister Saddle can be referred to as Phase I. The climb to the second saddle is Phase II. We gathered at this second saddle where there is a nice view of South Sister in front and Macks Peak off to the left. Behind left, McFarland Peak can be seen between the trees. Phase III, or the Ridge begins to the right. A trail follows the ridge around to the final ascent. This trail stays as close to the top of the ridge as possible, in case you lose it somewhere. At the end of the ridge, the trail drops a little and you are faced with Phase IV, the final frontier … ahem, ascent. It is the most beautiful section of the South Sister climb … and the most formidable.

The final ascent to South Sister is essentially a huge scree field covered with absolutely magnificent krummholz bristlecones that have been weathered over the millennia.

The scree field was likely created by landslides coming from the area between South Sister's two opposing limestone peaks. It is very steep and slippery. Quite a struggle to climb and more of a free fall to descend.

Nevertheless, we and many others take on the challenge every year passing through the magical scenery on the way up. Only words of advice are to try to stay somewhere in the middle and away from the more dangerous zones to the far right or left. There are pathways that most people use but they are not real clear and, this year, it was reported that the winter was not kind to the climb. It seemed even more difficult. But, to be fair, not many hikers have taken on the challenge yet this year after the snow has melted away. The pathways are probably not replaced with better footing. Today, we were the pioneers on the freshly snow beaten mountain. It is likely to be easier later on in the summer.

At the top of the scree, the ascent ends at a line of bristlecones. If you take a small trail out to the right, you will end up on the east peak. This is the minor peak of the twins.

To reach the major peak, turn left and climb the rock that scrambles up then around to the right. This takes you to the top of the summit ridge. A narrow walk out the ridge takes you to the log book.

At least nine hikers made it all the way to the log book, today. The remaining hikers stopped somewhere between the bottom of the scree field and the top. We all took a break then began the descent. No matter how far you hike on this climb, the scenery is gorgeous. I stopped early today and just enjoyed the old bristlecone forest. The entire group gathered again at the second saddle and made sure that everyone was directed correctly down to the South Sister Saddle. (Stay on top of the ridge!) Then the group enjoyed the trail back down to the picnic area where many more people were enjoying the holiday. Fantastic day of hiking!
5.5 miles; 2000' elevation gain; 4 hours 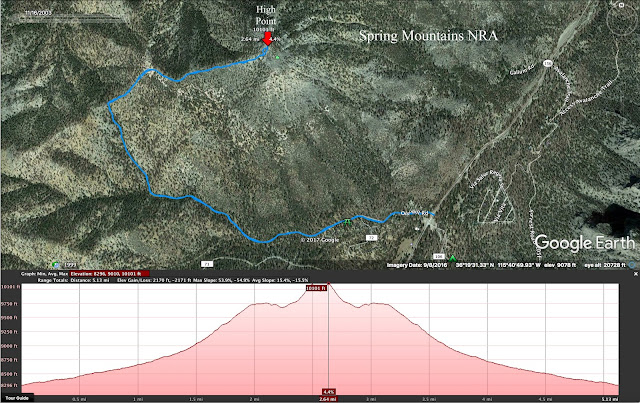 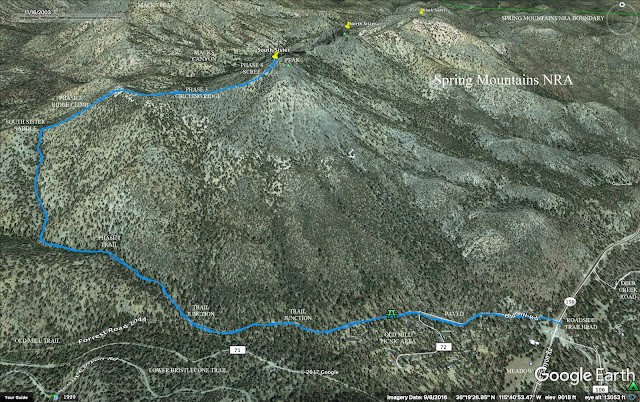 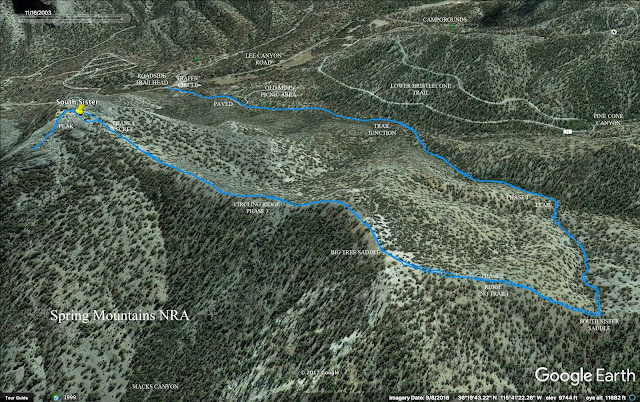