We had some warmer weather this week and the South Loop's 1st Overlook is now accessible without donning a pair of microspikes. (Albeit, there are still a few small snow mounds on the switchbacks and, of course, there is the always-last-to-melt second drainage crossing. That's always fun. Also, the forest service or wilderness volunteers … someone … has done a lot of tree cutting allowing hikers to hike the lower South Loop Trail without having to climb over, under or around the many fallen trees resulting from the harsh winter weather of 2019. There was a whopping twenty-four hikers that showed up today; a fantastic showing for this hike level!

We parked at the South Loop / Cathedral Rock Trailhead where there were already many cars even at 7:30 in the morning. It was Saturday and it was going to be a beautiful day. The early bird gets the parking space!

Since it was unusual for so many of the strenuous hikers to hike on the same hike, we introduced ourselves then started up. The faster hikers got the go ahead to "see you at the overlook!"

We all started out strong but after about 3/4 of a mile, we had separated loosely into three groups. When the strong but not as fast back group got up the monster steps after the one mile mark, we could see the front hikers enjoying the switchbacks. The middle group seemed to be staying together very well. (See photo to right.) The back group carefully made their way across the snow-covered second drainage crossing and started up. About 5 snow mounds still exist throughout the 14 switchbacks but there is only one that gives you any trouble. Also, there is a fallen tree on switchback number 11 (or 9, hmm). Hikers have been cutting this switchback as the only way to get by. Hopefully, this tree will get taken care of soon so that the trail is not damaged any more than necessary.

One hiker noticed that there was a new small crop of recently uncovered fossil rocks. The seabed fossils that can be found in the Spring Mountains are mind boggling. These high peaks used to be at the bottom of a shallow sea.

The precipitous slopes that reached upward to Griffith Peak were still covered with a lot of snow and the view from the switchbacks was fabulouso! Eventually, after talking to others on the trail, we all arrived at the 1st Overlook and took a group photo. Peeking around the corner, we saw that there is still snow on the slope above the Echo Cliffs.

Will the 3rd Overlook be accessible by next Thursday? Good question. We will probably try! After the cursory break, we started down. Again, we separated fairly quick but we planned to gather again at the Cathedral Rock Trail junction found near the Trailhead. On the way, we spoke to a group of fun-loving young men who were sliding down the snow at the second drainage crossing! Go Raiders!! Anyway, when the last of the group arrived at the meeting spot, all the others were happily waiting. Next, we started up the Cathedral Rock Trail. Our second climb of the day was shorter but it was noticeably steeper.

The strong and determined hikers climbed without rest! Well, a few hikers stopped here and there. It was good for us. With the late start in the higher elevations, we need to push ourselves.

The Saturday recreationalists had begun to fill the trails with their kids and dogs. Most of them were headed to Cathedral Rock's summit. This would require a large snow crossing in Mazie Canyon.

Our goal was just short of the snow. We stopped at the small spur trail junction to Echo Falls. All the water drainages are running full flow in these mountains with the heavy snow melt and we anticipated a spectacular display at the usually trickling waterfall. Half of us hiked up the trail to the falls that was covered with about 3 inches of running water. We were not disappointed! It is beautiful. Mike decided he was hot enough to try putting his head under the lower falls. Hmm. I don't think he would recommend it to anyone else. He said it was so cold that it hurt! Good research. We got our photos and returned to the trail junction where everyone was taking their second "stand-up" break. When the last hiker returned from the waterfall, we started back down.

The trail switchbacks down among the 10 foot tall aspens that were sporting bright green leaves. I couldn't see many other hikers in our group unless they were either right in front of me or right behind me.

At the spur trail, we had noticed a dark cloud encroaching on our vicinity. By the time we were descending the last three switchbacks, we started feeling sprinkles.

Monsoon season has arrived. This is a good reason to start your hikes early. The monsoons usually begin their thunderstorms at the 11am hour … give or take. Today's dark cloud didn't include the thunder and lightening but very often, they do. Be safe and don't expose yourself to such storms. The sprinkles were still falling when we arrived back at the cars. Perfect timing. Fantastic group today. Hope to see you all again soon.
6 miles; 1850 feet elevation gain; 3.5 hours; my average speed 1.6 mph 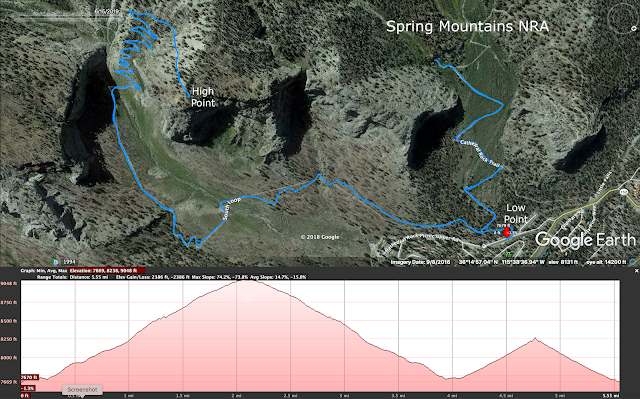 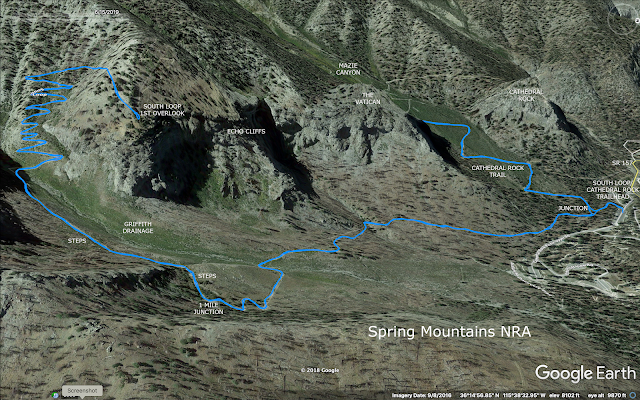 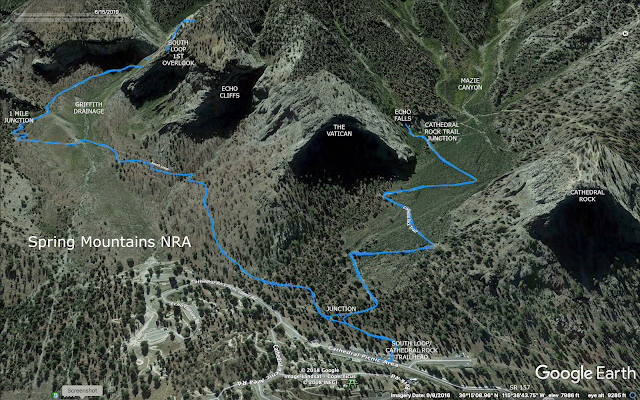