I recently posted my report from my visit to Pulpit Rock in Bedford, NH to a hiking related Facebook page. I received some nice comments and after explaining that I'm targeting shorter hikes in the greater Manchester area, someone mentioned that I should check out Quimby Mountain in Hooksett, NH. After doing a little searching online, I found a great trip report for Quimby Mountain on HockeyPucks Hiking and Highpointing. It was very informative and helped seal my next hiking destination!
As previously mentioned, Quimby Mountain is located in Hooksett, NH, east of Interstate 93. It serves as Hooksett's high point at 902 feet. From the research I did, I learned that there was no published trails to the top and bushwhacking would most likely be required to get to the summit. I read that it had a bald, rocky summit and also sported a benchmark (score!). 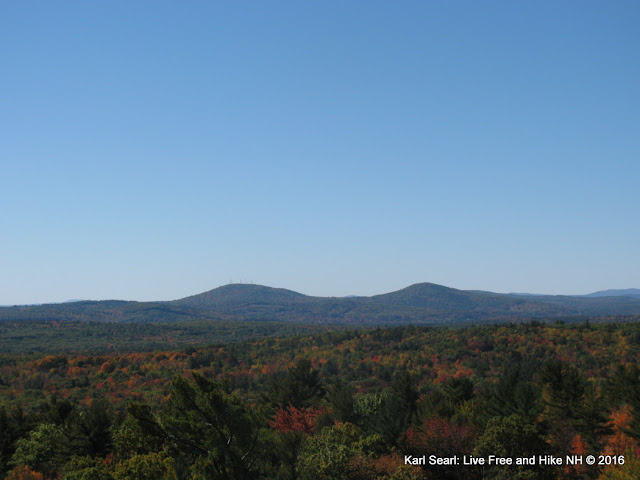 View of the Uncanoonucs with Joe English Hill just visible to the right of North Uncanoonuc
My buddy and coworker, Keith (former LFAHNH guest blogger), accompanied me on this hike to Hooksett's high point. We parked at a cul-de-sac at the end of Quimby Mountain Road. There are a couple new houses going in at this location and the view to the south is beautiful, just from where we parked. Whoever buys those houses will be very lucky. From the HockeyPucks Hiking and Highpointing's report, it seemed there was some private property that we were going to have to avoid, but we found no posted signs so we didn't worry too much about it.
We started out heading southwest down an gravel road which looked like it may become an extension of the housing development in the future. We tried to locate a good place to head into the woods (southeast) but the scrub was pretty thick. We didn't have much of a choice so we dove in and in a 30 feet or so, the woods opened up. We quickly started heading uphill and tried our best to find the path of least resistance. We soon came to a stonewall which was extremely wide, flat on the top and mostly covered with leaves and pine needles. This ancient stonewall acted as a good road to the top and we took it some of the way up. Soon, we were just below some small ledges which we were able to easily scramble to get to the summit. 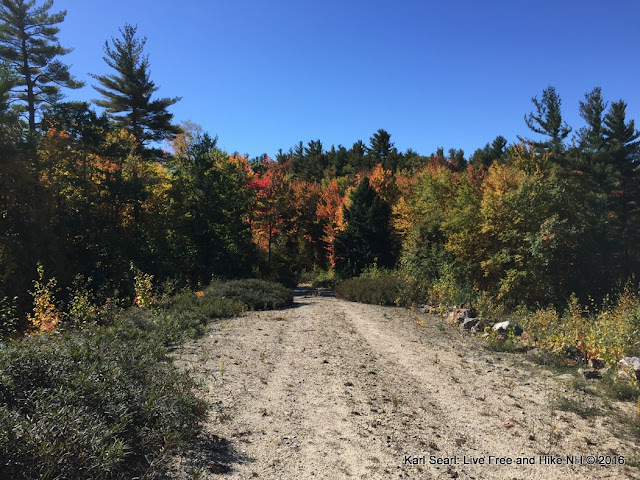 Gravel road we bushwhacked from
At the top, the summit was bald as I had read. There were some great views spanning south to southwest. The trees up there seem to be slowly growing in, restricting the views from each side. There was a great view of North and South Uncanoonuc, with Joe English Hill popping up from the side. We could also make out either Pack Monadnock or Mount Monadnock in the distance (not sure which one). To the south, we could see the profile of a city in the distance. We think it was Boston but had no map to verify. 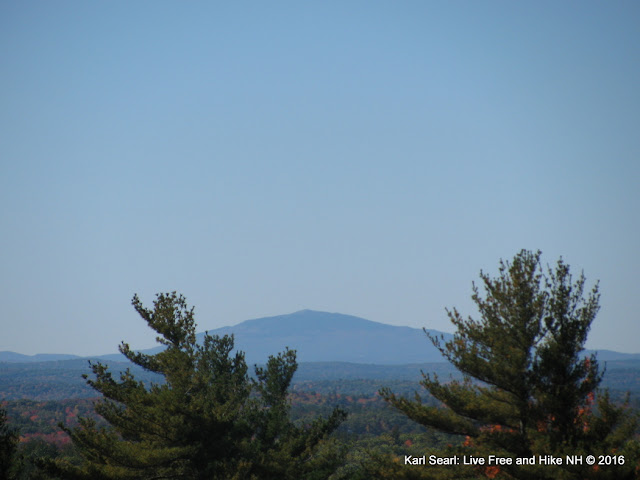 I believe this is Mount Monadnock but could be Pack Monadnock 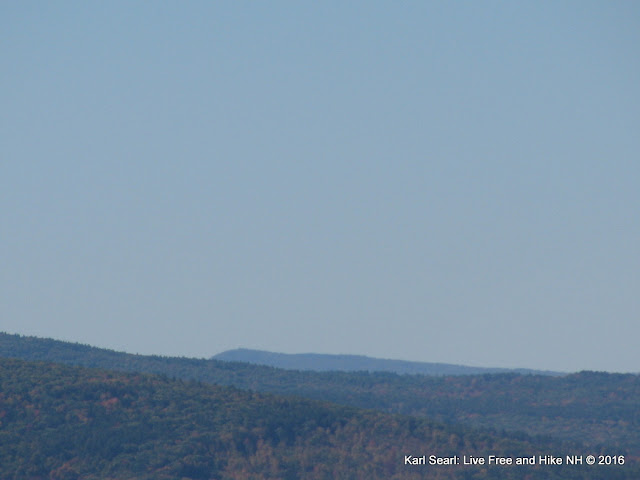 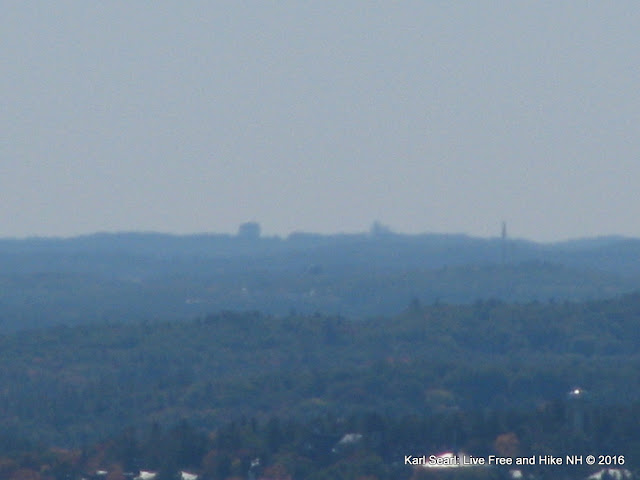 What may (or may not) be the Boston skyline
Keith located the benchmark, which was hard to spot. It's right at the top and is accompanied by a drilled hole. The problem is, it's pretty small and made of an aluminum alloy so it blends into the rock easily. Being a soft metal, it's been pretty abused and looks like someone took a claw hammer to it. It's not legible. 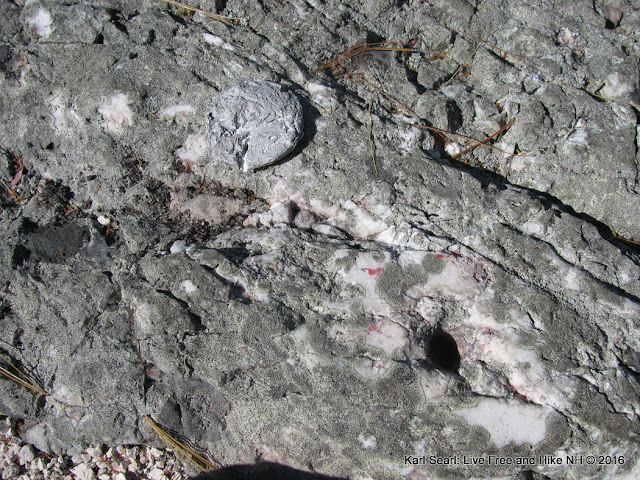 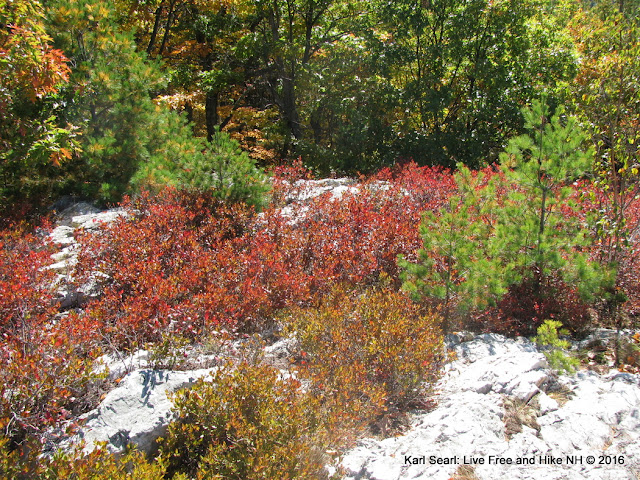 Some fall colors at the summit 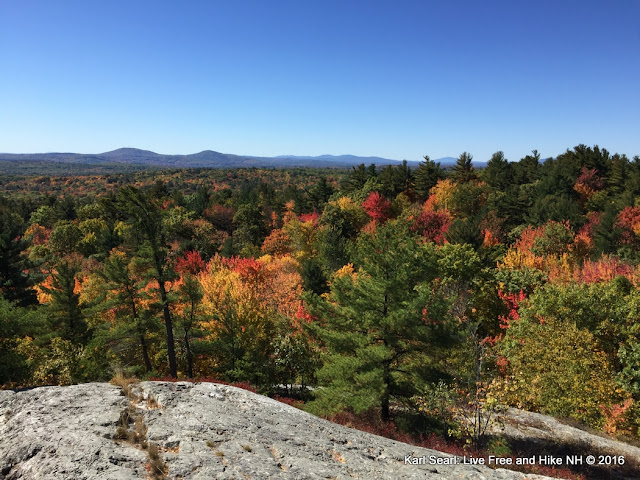 More fall colors with the Uncanoonucs in distance 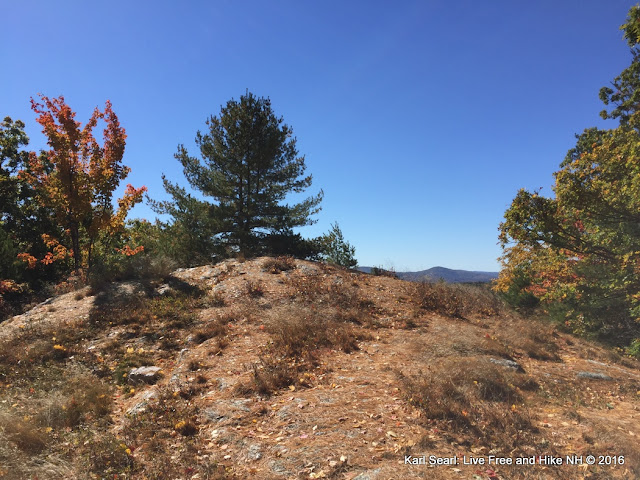 Bald Summit
After soaking in the views and exploring the summit for a bit, we noticed a small herd path that led down the northeast slope of the mountain. The herd path turned into a legitimate, unmarked trail and followed the property line along a stonewall. The other side of the stonewall had been clear cut for what looked like a new house lot. The trail popped out right next to the car and we felt silly we bushwhacked up instead of taking the trail! To our defense, the beginning of this trail is pretty camouflaged with weeds…so I'll just say we went the hard way up on purpose…to create a loop of course! 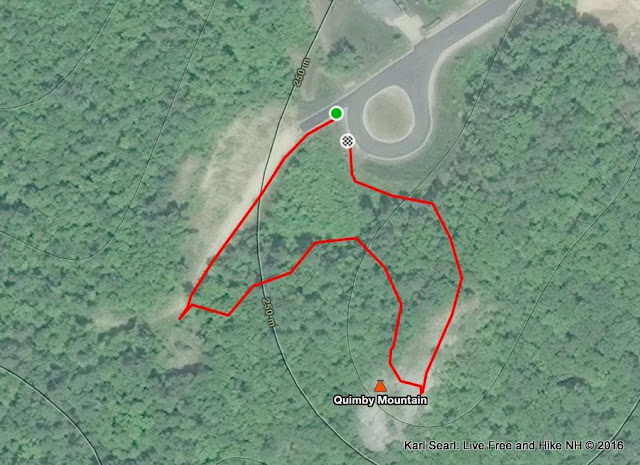 GPS Track, about 0.5 mile loop only
This was a great little mountain top! I'm really surprised there's not more information for this destination on the old interweb. One great thing I can say about this hike is that it solidified my desire to work on the NH town high points. Not necessarily for the need to check peaks off a list, but instead to explore new places in the wilderness that may be less traveled. It also pushes me to be a bit more adventurous by doing a little more bushwhacking, which is still outside my comfort zone. I'm definitely looking forward to some more high pointing!