My daughter had the day off from school for Columbus Day so Jill and I took it off too. We decided to bring her to Newburport’s Fall Festival. It was a fun morning event and we followed it up with some local pizza from Anchor Pizzeria. After that, the afternoon was free so I suggested we head over to neighboring Amesbury, MA to hike Powow Hill.
I grew up in South Hampton, NH which is the neighboring town of Amesbury, MA. I actually went to high school in Amesbury so I’m pretty familiar with the area…but never really ventured up to Powow Hill or “Po” Hill as we called it back in the day. Powow hill is 331 feet above sea level and serves as Amesbury’s highpoint. 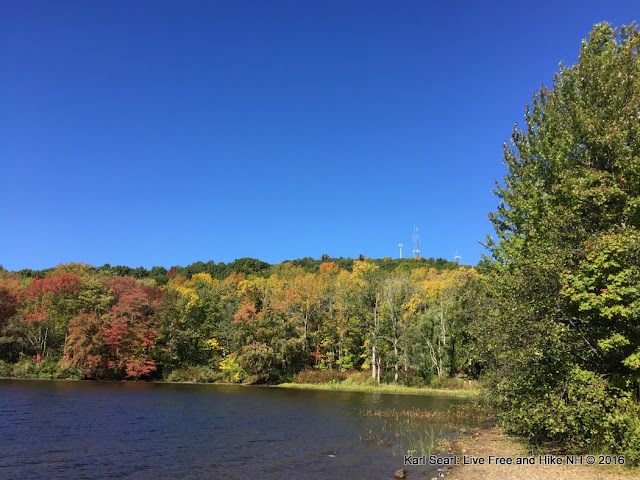 Powow Hill (towers visible) from the shore of Lake Gardner
Like many mountain and hill tops, this hill is rich in history. Its name is derived from the Native American tribe that used this hill’s summit as a ritual spot. I believe the Native American tribe was known as the Powow Indians, but this name would have been given to them by the European settlers of the time. The explanation in many history books was that these Native Americans congregated or “powwowed” on its summit. The best account of this is from an article entitled “Powow Hill, A Legend of Essex County” in New England Magazine, Vol. 2 which was published in 1832 and it reads:
“On the border of the Merrimac, some eight or ten miles from the ocean, there rises a steep eminence called Powow Hill. It is a landmark to the skippers of the coasting craft that sail up Newburyport harbor, and strikes the eye by its abrupt elevation and orbicular shape, the outline being as regular as if struck off by the sweep of a compass. It obtained the name from the Pagan ceremonial of the aborigines; for, in ancient times, ere our worthy and pious ancestors routed these heathen from the land, the hill in question was the grand high-place of Indian worship, and the nocturnal powwows held upon its summit were the terror and abomination of the whole neighborhood. While the savages lingered in these parts, they never failed, annually, to assemble on this consecrated mount and practice their mysterious orgies, greatly to the scandal and annoyance of all the Christian folk that dwelt roundabout – they having a pious horror of the practice of powwowing, denounced by Cotton Mather as damnable and demoniacal. Even when the last of the red men had disappeared from the country, the scene of their mystic incantations continued to be regarded with profound awe. A spirit of the Pagan mysteries dwelt about the spot; strange sights were seen; a marvelous legend was current – but let me not anticipate” [1]
Wow!!! Talk about dramatics and spooky stories. My guess is these legends and stories were heavily fabricated by settlers that wanted to justify the taking of the Native American land! I’m sure the Native American Tribe in Amesbury really gathered together up on Powow Hill to smoke peace pipes, party and talk about their glory days as worriers before the English started pushing them out!
More recently, Powow Hill was home to a small ski location which had slopes on its east side. I actually remember watching people ski down it when I was a kid. It closed when I was very young in 1993. I really couldn’t find a whole lot of information other than it was opened around 1949 and was known as Amesbury Ski Tow (which I recall from being a kid) until 1986 when the name changed to Atlantic Forest. The New England Lost Ski Area Project site has a page of limited information here. There’s also some more info and some older (unconfirmed) photos on the New England Ski History site here.
Amesbury has set up an Amesbury Trails website (click here) which has a great little map of Powow Hill and the surrounding trails. The PDF map can be downloaded here. We decided to ascend the hill from the west side starting from the Lake Gardner beach area. There is a parking lot (free) and a kiosk here which also had maps for hikers to take. Heading northeast, we walked down a paved sidewalk which quickly entered the forest on Lake Gardner’s southeast bank. The trail quickly went over too bridges to help avoid the flood plains. This first trail was called the Stagecoach Trail. At the first junction, we headed north on the Batchelder Trail and ascended this path the whole way. The trail system is marked very well with new signage. 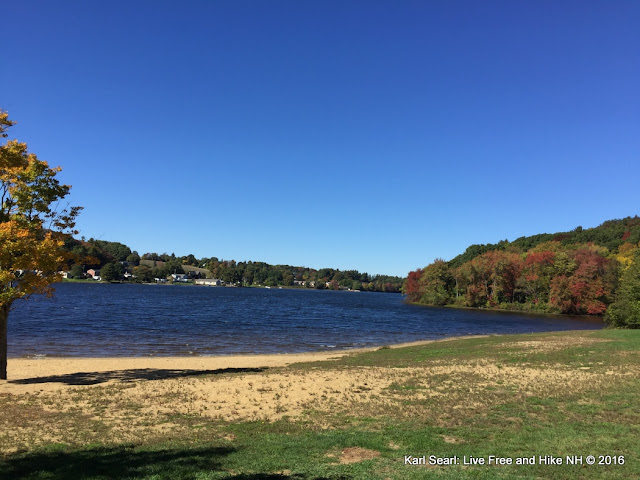 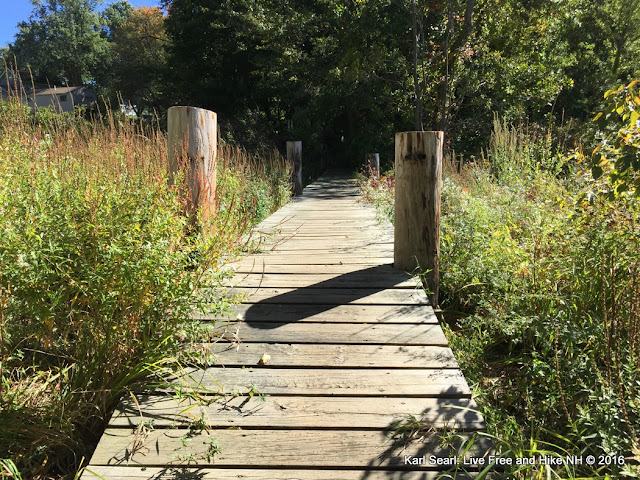 Bridges on the Stagecoach Trail
The Batchelder Trail climbed moderately and was mostly comprised of roots and dirt. My 5 year old daughter had no problem skipping and running the whole way up. It soon started to level off and swung to the northwest before dumping you off on the summit, which was very nice.
The summit is actually designated as Batchelder Park and is a flat, grassy area which is perfect for a picnic. The grass continues down the eastern slope for a short distance with some benches looking out over the land. There is also a flag pole, an Amesbury specific benchmark, a kiosk with a view finding legend and some older concrete slabs (I assume artifacts from the ski area that once stood up there). There is also a set of radio towers but they are segregated from the nice park scenery. 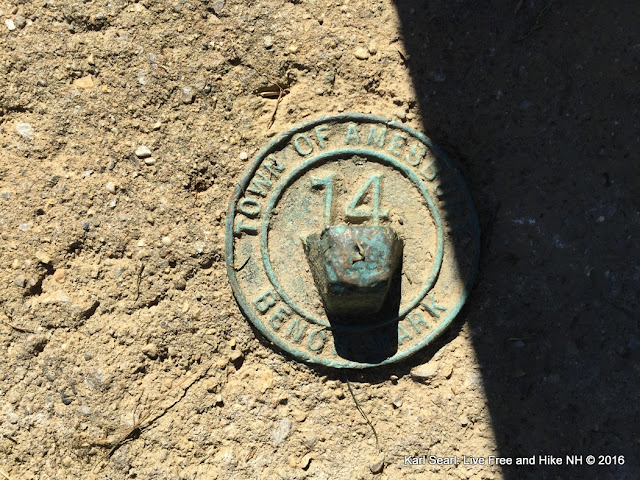 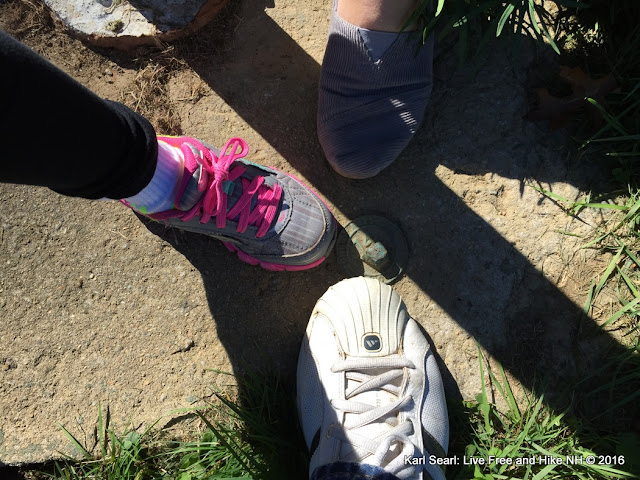 Proof we were there! 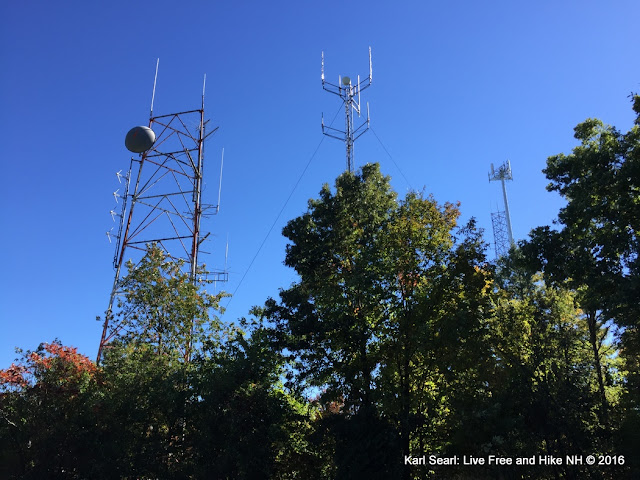 Radio Towers
I also found online that there was reference to a USGS Benchmark on the summit, but no accounts of anyone finding it. Instead, those who have sought it out feel it was buried many years ago. I too fell short and was not able to find it. But the Amesbury Benchmark on the flagpole foundation was cool enough. More on this here!
The view to the east was really incredible. I’m shocked that I practically grew up in Amesbury and had never experienced it before. You could see the Seabrook Station (nuclear power plant), the Isles of Shoals, some local landmarks (like Cider Hill Farm) and Mount Agamenticus in Maine. I think that was extremely cool when put into perspective. You are standing in Massachusetts, literally looking all the way across the State of New Hampshire and viewing something in the non-bordering State of Maine. 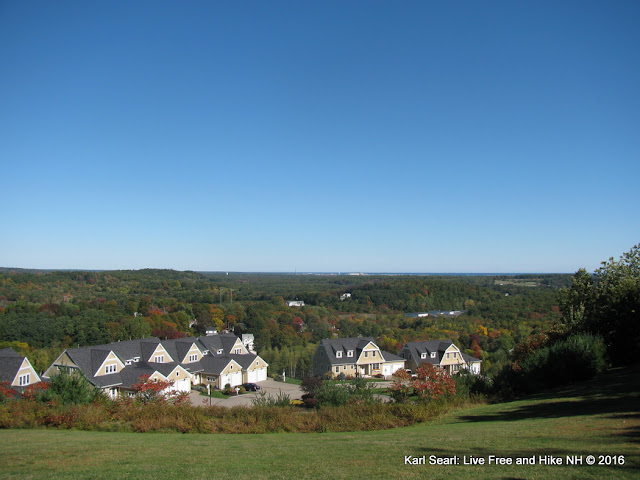 View to the East 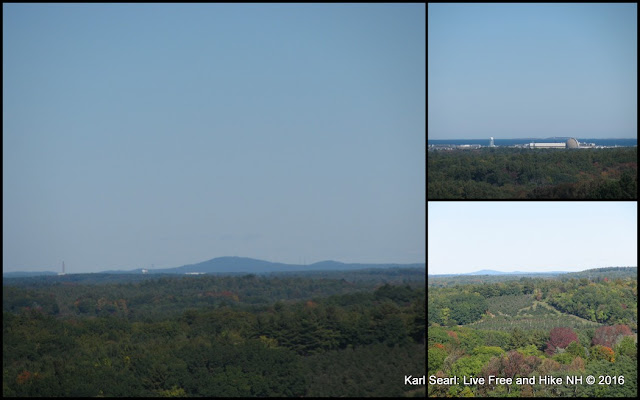 Left: Mount Agamenticus zoomed in
Right-Top: Seabrook Station Nuclear Power Plant with Isles of Shoals in the distance
Right-Bottom: Cider Hill Farm with Mount Agamenticus in the distance.
After taking a few photos and enjoying the views, we turned around and headed down the same trails we ascended on. Once back to the car, we packed up and headed to our next destination for the afternoon; Amesbury’s Powder House on Brown’s Hill. Hint…my next post will be about this 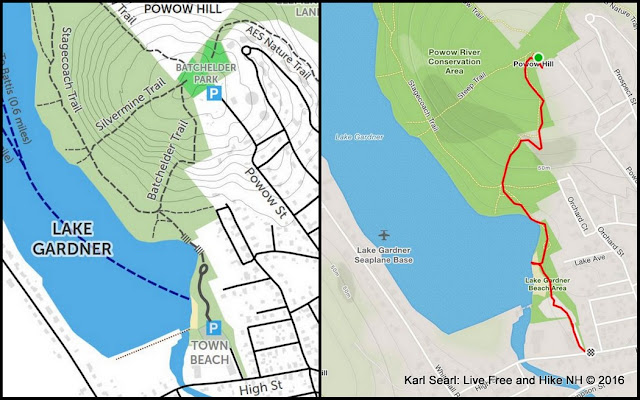 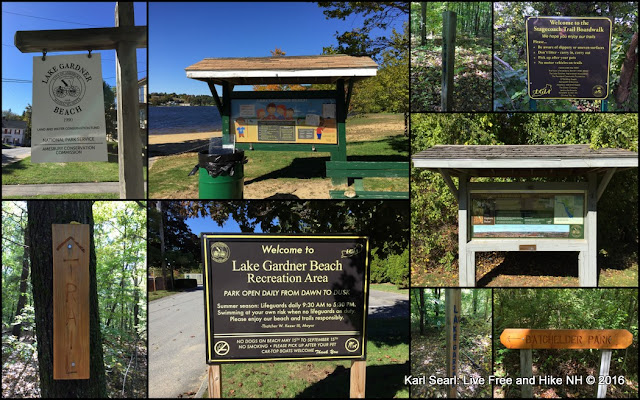