It has been ten days since I last hiked and only yesterday did I begin to feel any interest in hitting a trail again. That jet lag lagged on but now it is gone. As it is nearing the end of June I thought I should make an attempt to hike somewhere at Lake Louise before summer season up there gets into full swing. I decided to make my destination the Viewpoint beyond The Plain of Six Glaciers Tea House. I was on the road very early, I knew I needed to be to beat the crowd and to enjoy the hike under the best weather of the day.
So – it's a Monday, a decent forecast but not the best, it is still June and school is not out yet for the summer. So – note – I passed by the Moraine Lake turn off at 7:08 and it was already closed. A few minutes later I arrived at the Lake Louise Parking Lot and I ended up at the far end of the lower lot in one of the last parking spots available. Parks people were also beginning to send people to the upper lot. So – this is a sign of what to expect from here on in. I am happy to have already completed my classic Plain of 6 Glaciers hike and also already got in a hike up to Larch Valley earlier in June. 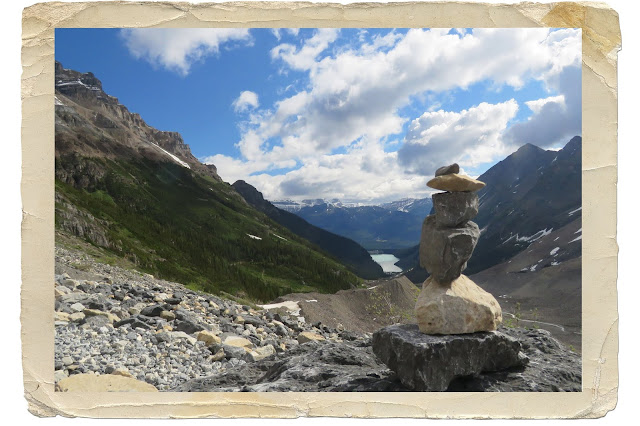 It was sprinkling when I left home but I knew from the forecast I would drive out of that and be afforded a lovely day in the Lake Louise area. Five minutes down the road a rainbow formed and it was there until I reached Scott Lake Hill. 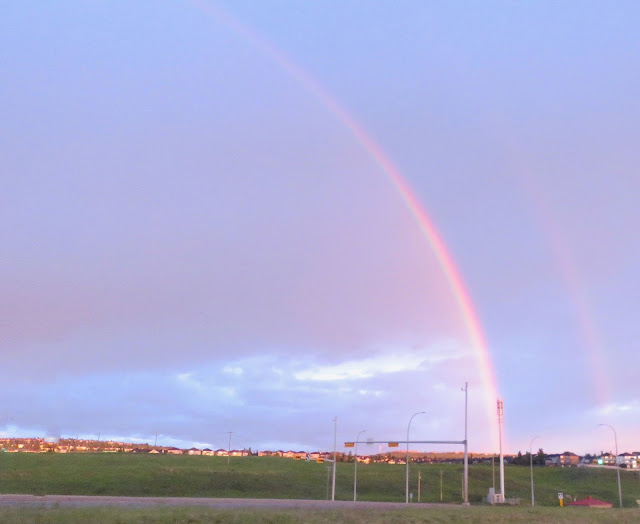 It was quiet in Lake Louise Village but not so up at the Parking Lot. I thought UGH the trail is going to be busy already. I geared up and headed off towards the Lake. 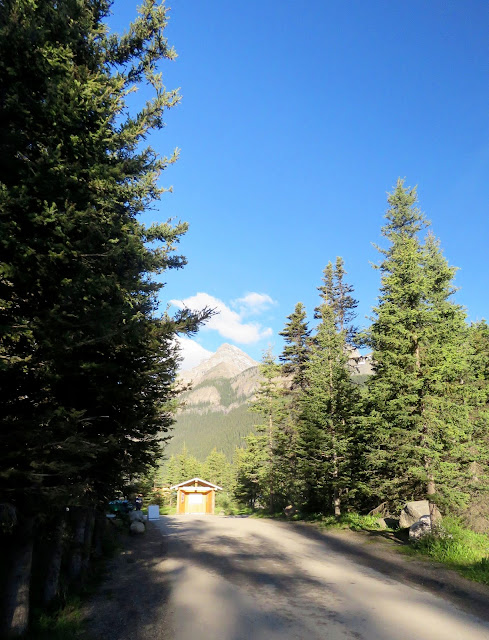 Lake Louise was as beautiful as it can be. But, where are all the people that belong to all those cars in the lot? I thought, UGH, they are probably all on the trail already. I captured this one shot as it was as perfect as it gets here. I thought while here, about Lago di Braies in The Dolomites which I hiked to just two weeks prior. That's their version of a beautiful iconic Lake. 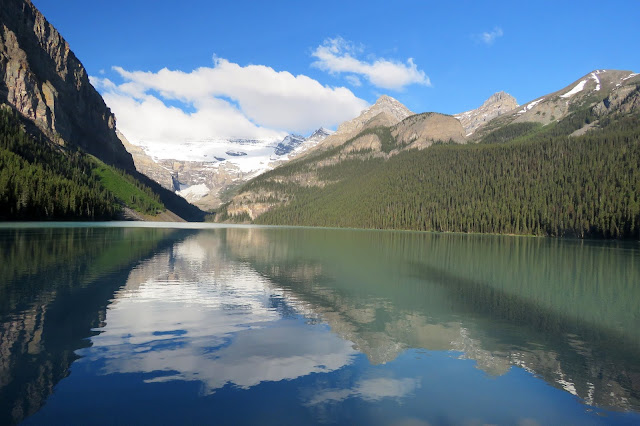 I was still wondering where were all the people! I passed by the turn off to Mirror Lake and Lake Agnes to where you would access Big Beehive, Little Beehive and Mount St Piran. The access was closed due to a bear in the area. This was a first for me to see this in this location. I thought, UGH, this means everyone is probably already on the Plain of Six Glaciers trail. 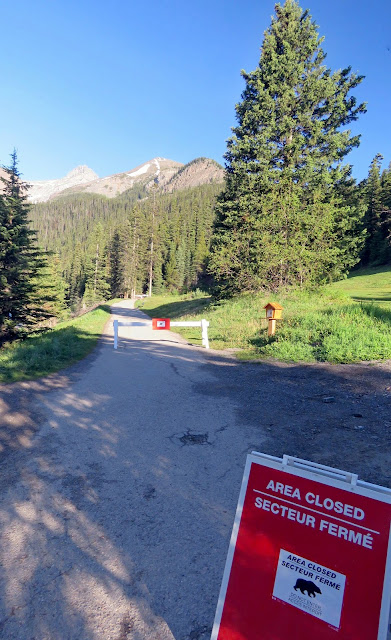 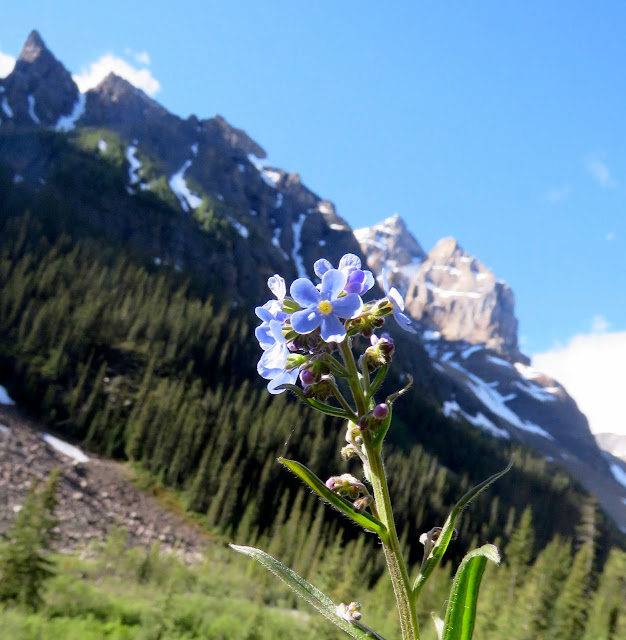 Along the lake shore I passed by many meanderers and then once at the end of Lake Louise there was no one for quite some time. Before the ledge section I met a couple from Texas and hiked with them up to the Tea House location. We passed by about five people and that was it. I still wondered where was everybody but then let that go because I knew they were not here and it would be nice and quiet. 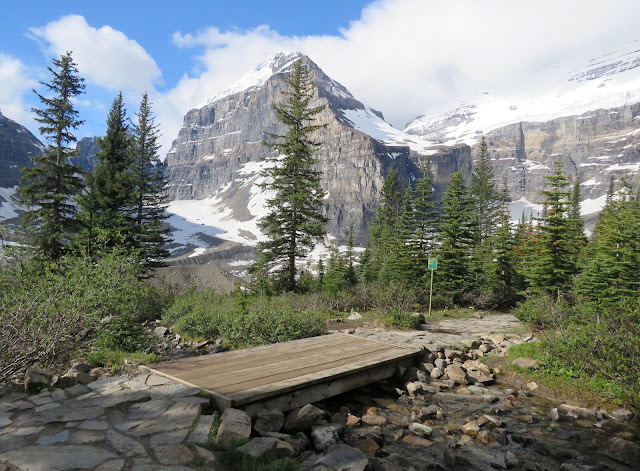 I asked a fellow from New York to capture my photo and showed him I wanted it to look like the photo above. This is what he secured. He took directions well. The couple from Texas went off to the Tea House and I headed off to the Viewpoint along with the New York couple. 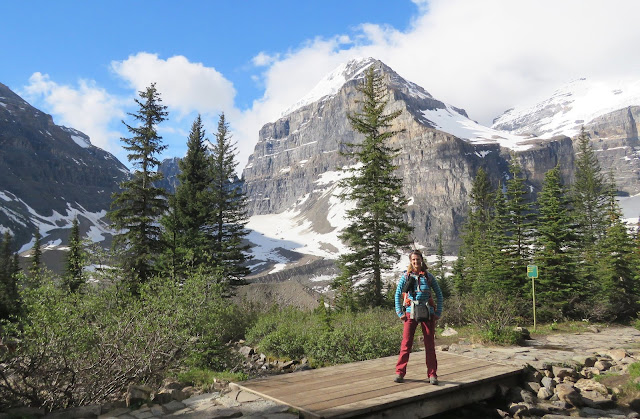 I thought back to what my Dolomite friend taught me about yoga poses. I took my time and went through the steps and this was the outcome. It may be hard to tell here but that boulder is sitting on the edge with a steep drop down behind me and to my right in the photo. You definitely need good balance here! 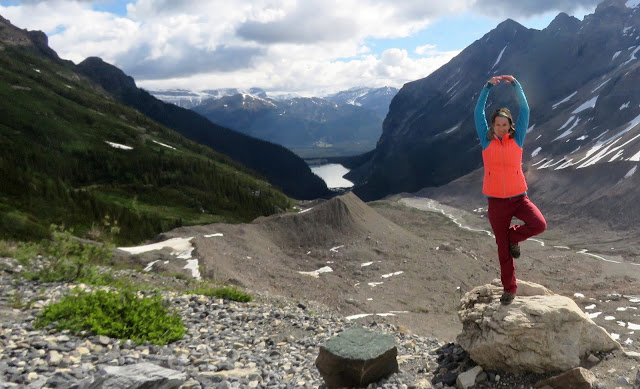 I settled in for a snack. It was too early for full on lunch and I was not that hungry either. I did have a spot of tea with my snack. While sitting here Victoria Glacier let go some of her load creating a thunderous rumbling boom. It was the first time the others ever experienced anything like that. I was happy for them! This was my snack time view of Lefroy. 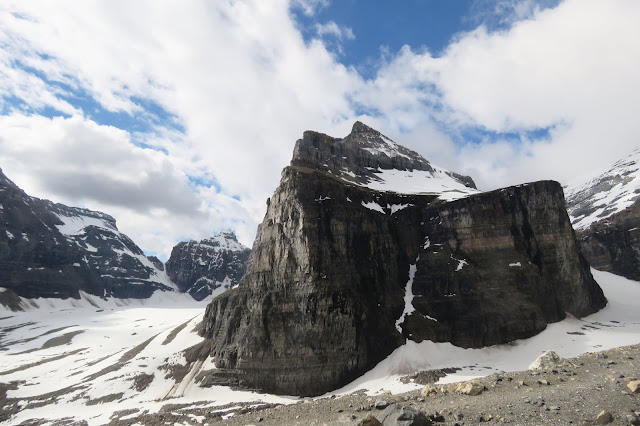 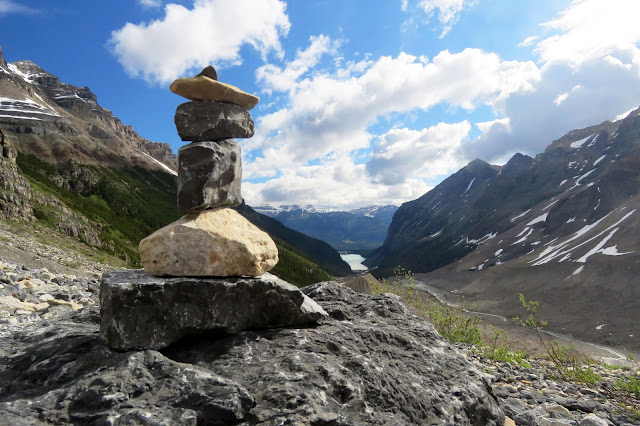 On the hike back I passed many people just coming up. The sky around the Tea House and the Viewpoint was now overcast with no blue. These things confirmed leaving early was the wise choice.
arriving back at lake level 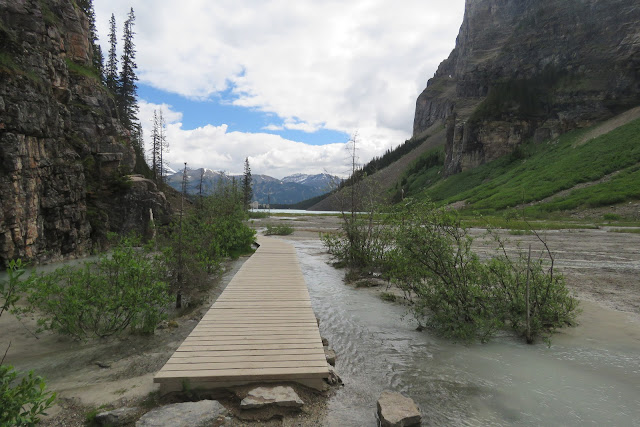 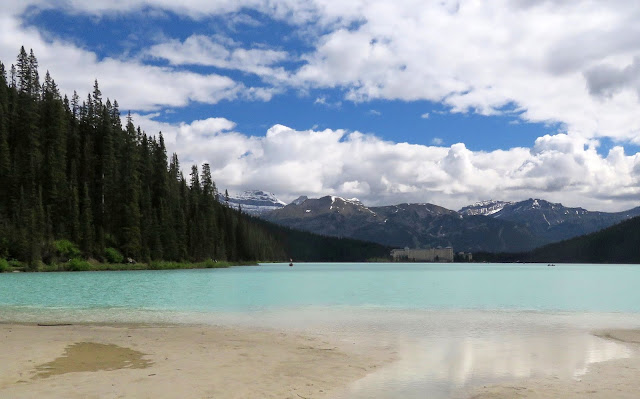 I am quite happy with how today transpired. I love this area and all the hiking opportunities with some being favourites of mine. I don't know when I will next be here so I savourved every second today. It's just not user-friendly enough anymore now to leave home at a humane time and expect to get a parking spot and not share the area with thousands upon thousands on any given day. Maybe my next visit will be to X-C Ski come next winter!