Packer’s Falls – Exploration and Some History!

Not too long ago, a buddy of mine at work mentioned that his wife and kids were up my neck of the woods. When I asked where, he said they had checked out a small swimming area called Packer’s Falls. I had never heard of an actual falls in my area, but knew there was a Packer’s Fall Road very close by. After doing some Google searching, I found that there was in fact a Packer’s Falls on the Lamprey River located not too far from my house. I also found out that there is a New Hampshire Historical Highway Marker for Packer’s Falls…which means (drumroll) perfect topic for a blog post!!! 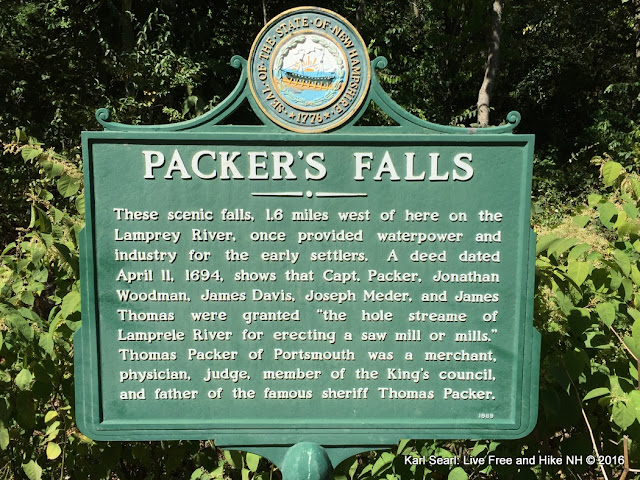 The marker for Packer’s Falls is on NH Route 108 on the southbound side, at the intersection with Bennett Road. As the marker states, the actual Falls are 1.6 miles west at the intersection with Bennett Road and Packer’s Falls Road. My guess is that they strategically placed the New Hampshire Historical Highway Marker in a location where more commuters might see or view it, hoping to draw attention to the actual landmark. The marker reads:
“These scenic falls, 1.6 miles west of here on the Lamprey River, once provided waterpower and industry for the early settlers. A deed dated April 11, 1694, shows that Capt. Packer, Jonathan Woodman, James Davis, Joseph Meder, and James Thomas were granted "the hole streame of Lamprele River for erecting a saw mill or mills." Thomas Packer of Portsmouth was a merchant, physician, judge, member of the King's council, and father of the famous sheriff Thomas Packer.” 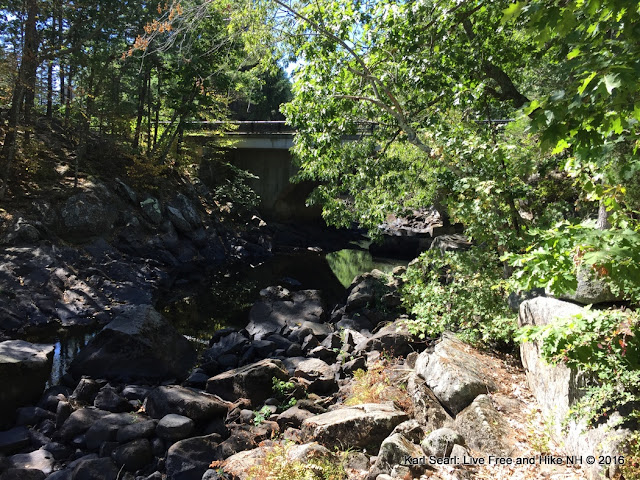 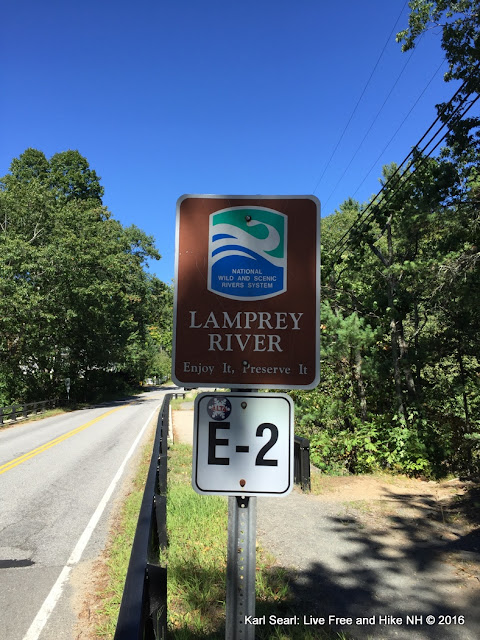 Packer’s Falls is an impressive set of rapids and is the second in line down the Lamprey River after Wiswall Falls. I found that the rapids are typically rated as Class III in the spring (during the snow melt and run-off) and still remain a Class II most summers. When the water is lower and tamer, there are pools that can be used by visitors to lounge, similar to Diana’s Baths in Conway. There’s a great tour guide pamphlet that can be viewed here on the Lamprey and it’s attractions. [Ref. 1] 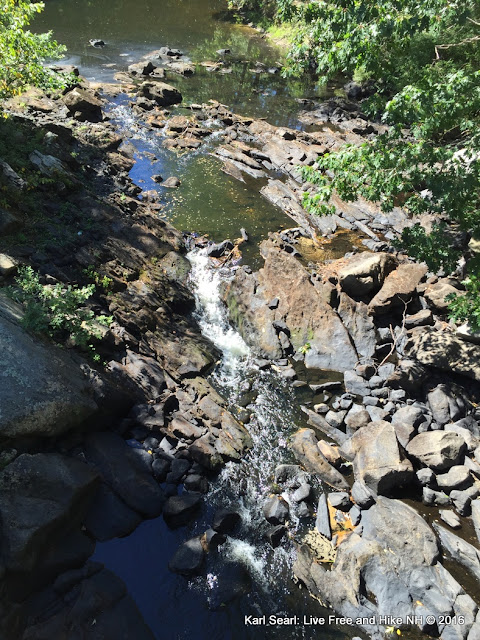 The only evidence of Packer's Falls running water on the west side of the rapids. I'm sure it's much more dramatic when the river is flowing full!
I found a lot of history on Packer’s Falls in some Google Books and other blogs. As the marker states, the Falls was granted to the men mentioned for use to build mills. Back then, Packer’s Falls actually encompassed a series of falls down the river (Wiswall and Wadleigh Falls presumably), and the rapids that are now referenced as Packer’s Falls were merely the “second falls”.
Captain Thomas Packer, for whom Packer’s Falls was named after, was granted half the land and a stretch of the Lamprey River for a mill or mills. The others mentioned in the marker were granted the other half. At these falls, from what I can tell, there was an old saw mill and an old corn mill which changed hands throughout the years. [Ref. 2]
It’s important to mention that Captain Thomas Packer was “a merchant, physician, judge and member of the King’s council”, not to be confused with his famous son, Sheriff Thomas Packer. Sheriff Thomas Packer is well known for the execution of Ruth Blay, the last woman executed (somewhat unjustly) in New Hampshire. It’s said that he gave the execution the green light to move forward early after hearing that a pardon was on its way from the Governor for the reason that he didn’t want to be late for dinner. The pardon is said to have arrived moments after she died. You can read more on this famous story here. [Ref. 3]
There’s a small parking area on Bennet Road near the intersection with Packer’s Falls road, only large enough for about three cars. I explored the north banks first, east of the bridge. Here, the banks contain a small maze of trails leading out to the river. There are large stone walls built up into the banking. Near the top of these structures, I found an old brick foundation with ancient looking hardware embedded in. I can only assume these are the artifacts left behind from the old saw or corn mill that was once powered here. 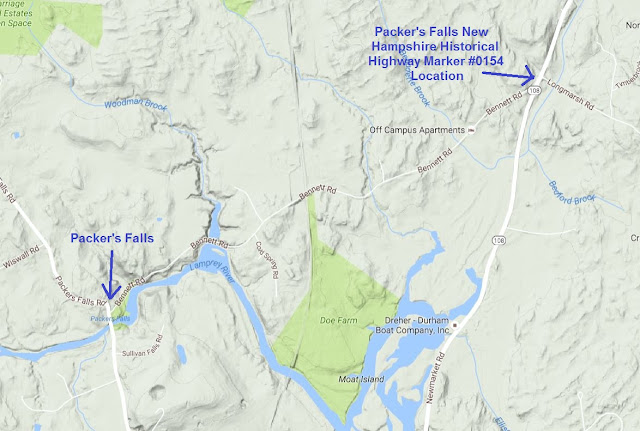 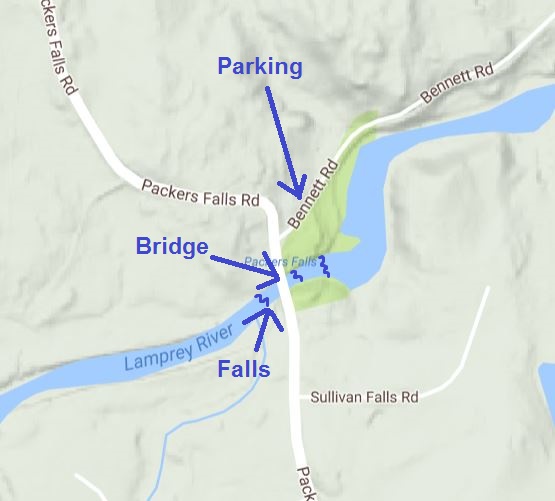 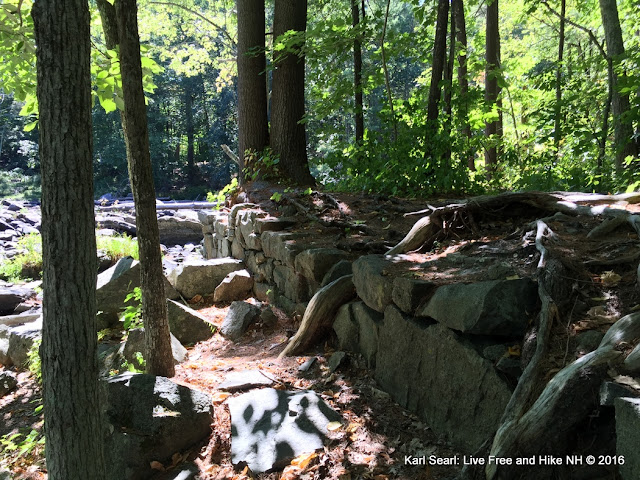 Old Stonewalls and Foundations on the north bank
Out on the river, I found it was easy to rock hop over the blackened granite boulders. These boulders are typically under water and help create the Class II/III rapids that are standardly flowing. Unfortunately, with the severe drought hitting us in southeastern New Hampshire, the falls were a mere trickle. Moving up the banks and eventually over the bridge, the western side of the falls (or up streams) was the fastest moving part, but still not something I would consider to be concerning rapids. One good thing about the lower river depths is that it makes for lounging in the brisk pools more enjoyable as well as easier to wade into. 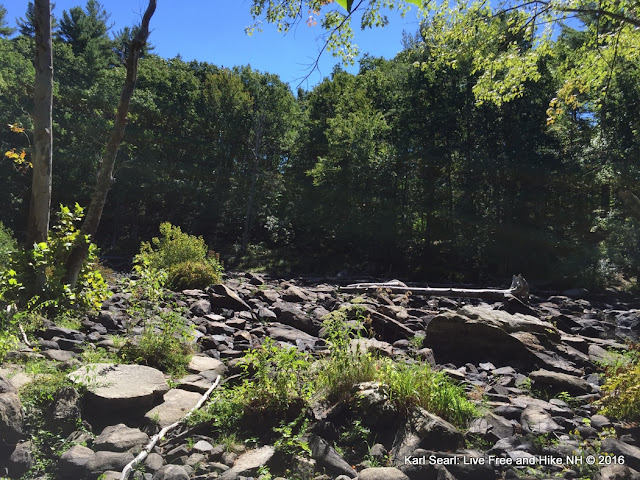 This image really shows how dry the river is. Under normal conditions, this would be submerged. 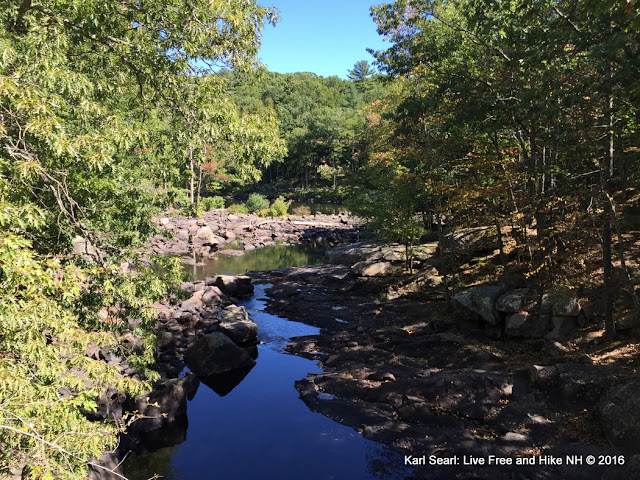 Looking down the Lamprey River toward the east from the bridge. 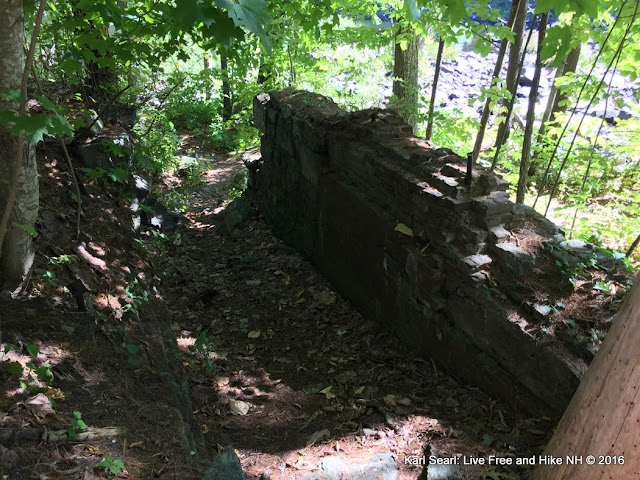 Trough Foundation, I wonder if this housed the wheel that the water pushed creating power. 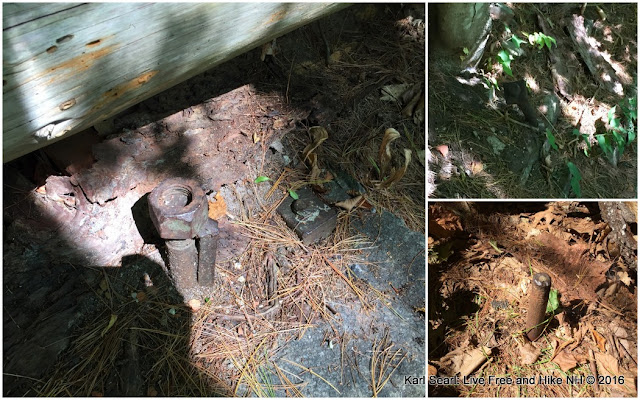 Embedded HardwareIt always amazes me how many cool, natural features are in New Hampshire. These features are always tied to history in some way and many times, artifacts are left behind to help tell its story. I know I won’t live long enough to visit every spot on my list of places to checkout in New Hampshire because I add to that list faster than I can visit them! I was happy, though, to find a small waterfall with an abundance of history close to my own backyard to explore.
Facts about this New Hampshire Historical Marker: