Notchtop has been a summit I have been both looking forward to and dreading. It's one of the few things I have left to do in the park, and most often climbed via a number of technical routes. Two years ago I took the Flattop Trail up with the intention of climbing this peak. I got to the Continental Divide just west of the summit, and I was intimidated. Plus, my leg hurt with every single step up. It didn't feel right, but I sat there trying to convince myself to go on. I turned back, and got in to see my doctor later that day, who diagnosed a stress injury. It was nice to relax for a week, yet this summit has remained on my mind since then.Since I've been up and down Flattop enough for any one person, I decided to head to Lake Helene, and ascend with the fourth class gully described in Fosters book. 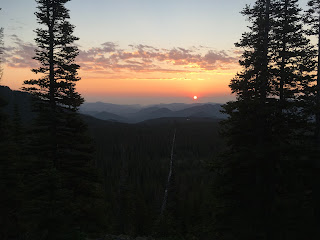 Another beautiful sunrise from the trail. 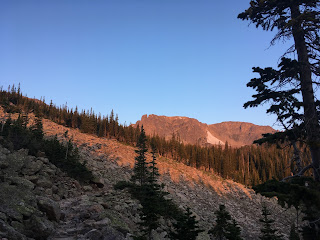 The first look at Notchtop, and yes I was still intimidated! 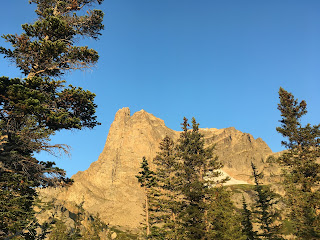 From near Lake Helene. I followed the trail near the lake, losing it in some rockier and bushier terrain west of there. Ah well, it was easy enough to just keep heading up. 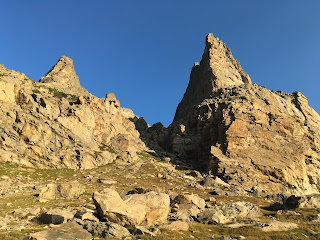 At the bottom of the gully, looking up. This would essentially take me back to the same place I was at two years ago. 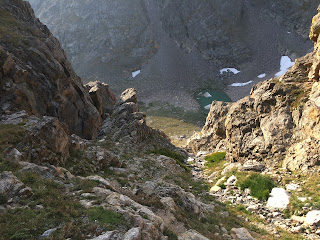 Looking down as elevation was gained. There were a few short sections of scrambling and route finding. As this is one of the down climbs for the technical routes, there was a social trail put in here and there. 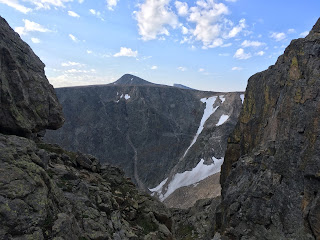 Looking south to Flattop and Hallett. 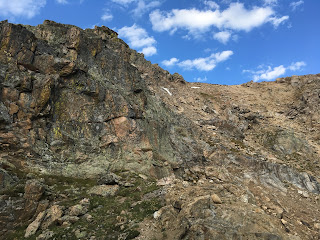 Back to the rock of the Continental Divide.
I think last time I was under the mistaken impression that you stayed right on top of the ridge. This time I'd done some more research, and knew one had to stay on the south side of the ridge. Still I went up for a look. It was exposed! The theme of the day.
There is an obvious social trail to lead you the proper way. Here are a few pictures of the route. Sorry mom. 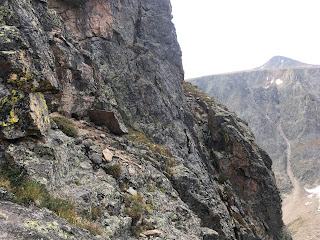 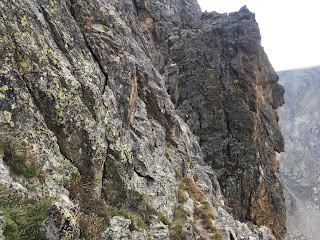 A few cairns here and there… 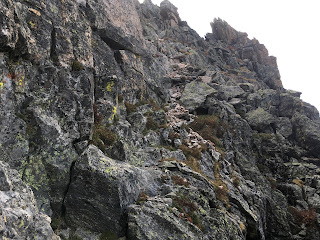 Lots of extremely exposed scrambling, but the rock is solid…
I made it to the summit of Notchtop Mountain, as stated in Fosters book. This is the highest point on the ridge EAST of the divide. But this isn't the thing people come to climb. People come to climb Notchtop Spire. This is shown as the true summit in other places, such as Listsofjohn. 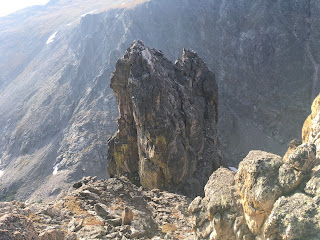 Notchtop Spire from Notchtop.
Yeah, it looked scary, puckery, eek, exposed, or whatever other word you want to use. I looked down at the broken ramp, which looked to be about a foot wide from where I was. "Maybe," I thought, or perhaps said out loud, "I'll be coming back for this one with a Dan and a rope."
I carefully descended down to the notch, then kept south (right) of the spire. A small boulder stands between you and the ramp. It was an easy climb. 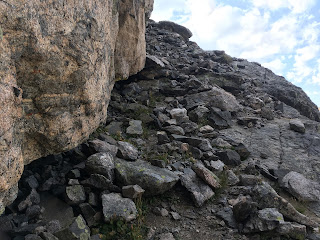 And the ramp turned out to be about five feet wide. Take this until it dead ends at a crack. Then, up the crack. Then a few steps up and across a slab. Then to the top. 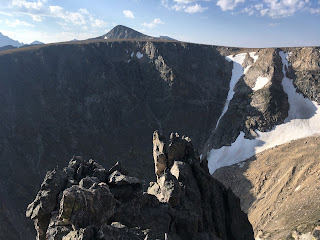 The summit of Notchtop Spire, 12080+ feet.
Phew! I was there, but I was only halfway there. I still had to go back! 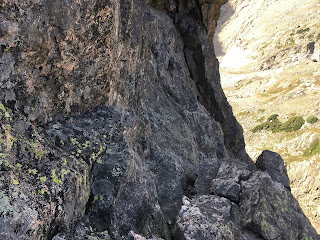 Looking down the slab near the summit. It's hard to tell from the perspective, but the lighter stuff on the right is the ground… under a few thousand feet of air. Do not fall here. 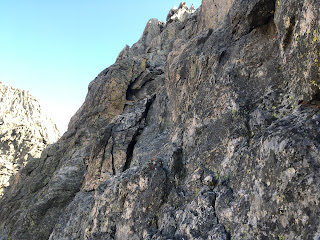 Looking up from the bottom of the slab. 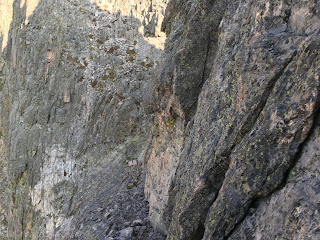 And down the cracks to the ramp, with a steep drop off and lots of air on the left.
I carefully went back over the boulder at the bottom of the ramp and made my way back to the summit of Notchtop Mountain. 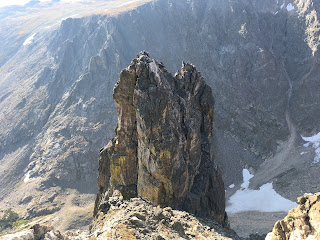 I was breathing easier here; I was now past the most difficult and exposed movement. 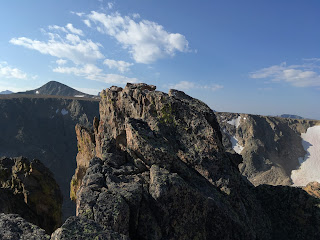 The summit of Notchtop Mountain.
I carefully made my way back to the Continental Divide. I made it and sat for a snack. 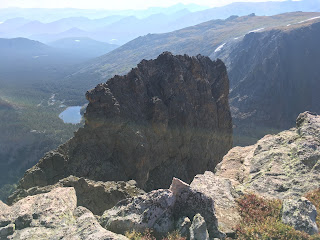 The rocky spine of Notchtop Mountain.
I was relieved and joyed to check this one off. While only fourth class by this method, I would suggest this is one of the most difficult peaks in the park. I would also suggest that while it's only fourth class, being able to climb fifth class is mandatory here. A fifth class climber will definitely have an easier time with the moves required, and will (hopefully) be able to keep a cooler head with the exposure.
But the day was young, and I'd decided to go take another look at Hayden Spire. I set off at a jog across Bighorn Flats, and climbed Sprague Mountain again (third time this year!). It was an easy descent from here to get to the area. 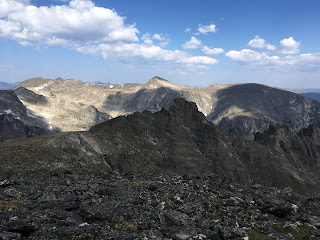 Once again, I was looking for the mythical third class route described by Richard Rossiter in his RMNP books. Keep in mind that anything I say from here on is not to talk crap on him, or stir anything up. I was just interested in dedicating a few hours to see if I could find this route that no one else has.
First I decided to head around to the standard 5.6 route, which climbs the spire from the east. It's some third class exposed movement on the south face to even get here. Up a crack system, down a boulder, and I was there. 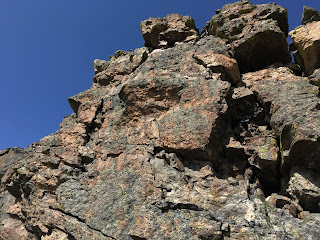 At the start of the difficulties. While I was confident I could do the moves, I was not comfortable doing the moves without a rope. I went back the way I came and decided to take a look at the west face- this is the face he claims to have walked down to the Continental Divide.
First you need to climb the head wall to get close. While well featured, this slab had a mantle move that was definitely fifth class. The rest I'd agree with third or fourth. 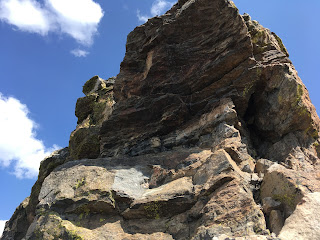 I got to this point, and didn't see a safe way forward. I could've crossed a knife ridge to get to the slab under the overhang, and traverse around to the left, but I couldn't see what was beyond that. And there was nothing under the slab. I guess long story short, I did not see a viable route here, at least one that I felt comfortable doing unroped. You can see how achingly close I was to the summit, but I turned back. 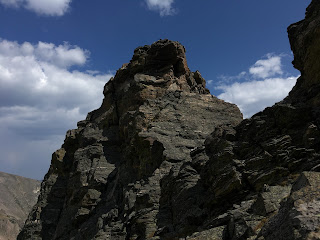 The head wall below the summit.
With some more research, there is a 5.3 route that climbs the wall on the south side of this face, and is soloable. Maybe that's where Richard came down?
Conclusions:
1. He climbed it in 1994 but the route he took no longer exists- perhaps the rock has broken since then.
2. He was having a strong day, having climbed the 5.6 route up from Lonesome Lake, and perhaps the descent didn't feel as hard as it really is.
3. He got confused/turned around/??? and climbed something other than Hayden Spire.
3a. While I certainly believe his saying that he climbed it, perhaps he didn't and took the word of others that there was a third class route.
4. I suck at route finding (a distinct possibility!).
5. Knowing that this controversy has existed for years, he should've went back and repeated the route to see if he felt it was truly third class before releasing a new edition of his book, and again calling the route third class.
Again, this is not to call him out, just opinion backed by multiple photographs. And Richard, if you happen to read this, I would be happy to discuss with you. You can take any photo on this website of Hayden Spire and draw the route you took on it for clarity. It's not a short day to get here, but I'd be happy to return with you.
So the weather wasn't looking great, and I caught a few raindrops as I descended Sprague Mountain. I ran out of water as I was going up, and was happy to hit and refill from Eureka Ditch. I alternated between running and hiking as the terrain allowed. 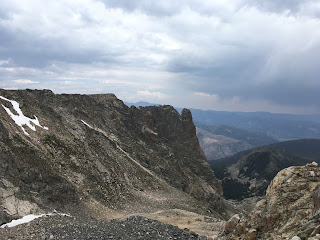 Notchtop from Flattop- see the last photo for annotations. 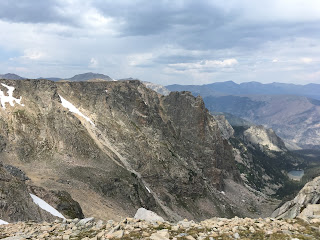 Another view as the trail curved around.
I ran down the trail as much as possible, setting a new pr for the descent. Since I was here and had some time, I decided to visit a few of places I've yet to visit.
First, Tuxedo Park, a small pullout picnic area near Moraine Park. 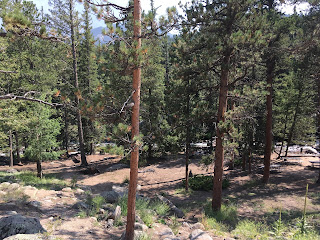 Pleasant enough, but not my cup of tea.
I drove up Trail Ridge Road a bit, then turned down 34 to head towards the Lawn Lake th. There is a small pullout on the right side of this descent, and I parked there and walked the closed to vehicles road to Little Horseshoe Park. 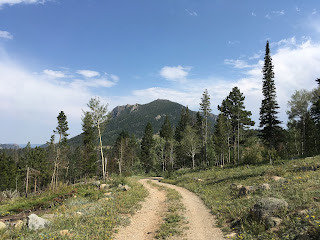 The view of Deer Mountain was superb. 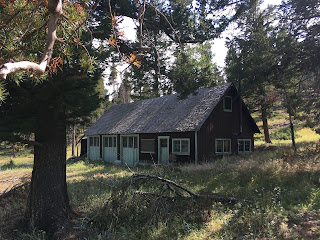 There's an old stable, now used by RMNP for storage for… toilets. Yep, there was a pile of the white plastic toilets used in the back country sites. Other assorted items contained within.
I continued down the road and the view opened up: 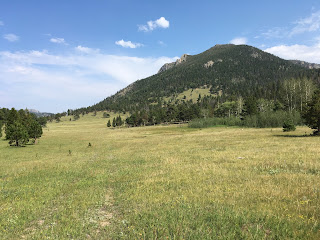 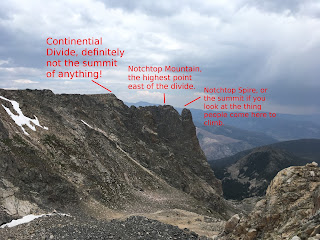 Annotated photo of Notchtop. Excuse my misspelling. Apparently, Kent Dannens RMNP book says the highest point of the Continental Divide closest to the ridge containing Notchtop IS Notchtop. It's not, but I guess a logical conclusion given the other -top peaks in the area are on/close to the divide.
So I guess it depends on how you look at it. Notchtop Spire is clearly not the summit if you consider the highest point east of the divide to be the summit. But Notchtop Mountain is not the summit if you look at the most difficult point, and consider what it is that people actually come here to climb. Maybe these should be two distinct summits?
It was definitely satisfying to stand on this summit; it does not come easy, and was one I certainly had some emotional investment in. Again, while this route may "only" be fourth class, I would consider fifth class experience mandatory to reach the summit from this method of ascent. A helmet is also mandatory, as you will be below rock that could fall on you for most of the route. Learning to read the first time was hard enough! Any fall along the way would likely result in death. Take your time and move with purpose.
Link to hike map/GPX on Caltopo.
Notchtop via South Gully:
Notchtop Mountain, 12129 feet: 4.44 miles, 2654 foot gain. Fourth class, with the gully approaching fifth class. Helmet required. Strenuous.
Notchtop Spire, 12080+ feet: 4.6 miles, 2605 foot gain. Fourth class, helmet required. Strenuous.
Sprague Mountain, 12713 feet: 8.5 miles, 3263 foot gain. Second class. Strenuous.
Hayden Spire, 12500 feet: 9.1 miles, 3025 foot gain. Fifth class. A summit will wait…
In total, this day covered 18.95 miles with 6673 feet of elevation gain, with time in extremely exposed fourth and low fifth class terrain. Strenuous+.