I'm sitting to write about this day a few months later now. Hopefully the memory hasn't gotten too fuzzy!Dan and I attempted Mount Audubon in January, and got pretty close to the summit before deciding to turn back. It was windy as heck, and I think we were both feeling pretty miserable as we made the seemingly never ending climb. The thing that finally decided us was that the wind was lifting up and randomly launching slabs of snow into the air. We were heading directly into the wind, to it was easy to assume we might become a victim of one of these missiles. Since we started from the winter closure, it was a fairly long walk back to the car, at least in the stiff boots I was wearing. I vowed to return in better weather, and once summer came, I was ready to go. This excellent trip report on 14ers gave some great beta on the route, with the technical and route finding crux being the link between Paiute Peak and Mount Toll. I saved a photo of his gps track and the photo of the weakness on my phone to have as reference. What a difference it made starting at the Mitchell Lake TH vs the winter parking! My track from the winter shows it took us nearly two hours just to get to the Mitchell Lake Th in the winter. I started up the Audubon trail at a good pace- my plan was to run as much as possible on this fun loop. And fun it was, just by planning. I'd visit two thirteeners and three peaks in the 12900's, plus unranked peaks "Notabon" and "Pawshoni". I was really psyched! 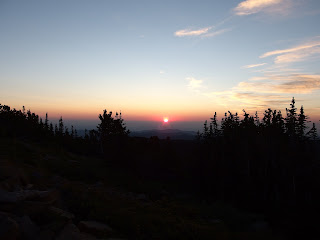 Sunrise from the trail. The trail starts from around 10500, so it wasn't long before treeline was reached and passed. I stuck to the trail until I neared Notabon, when I left to talus hop the remainder of the way to the summit. It might've been better to stay on the trail longer for easier movement, but then again it moves away from this summit, so the distance to be traveled will increase. 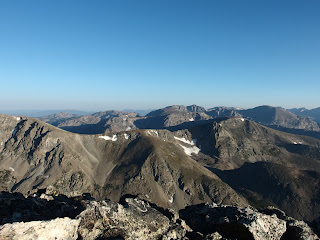 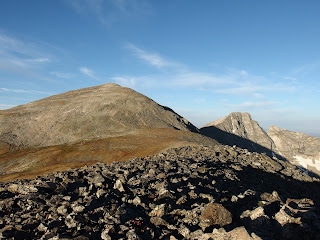 Looking to Mount Audubon and Paiute Peak from Notabon. It was pretty easy movement to rejoin the trail and head to the summit. There were several social trails as elevation was gained, each leaving and then rejoining the main trail in various places. And then… 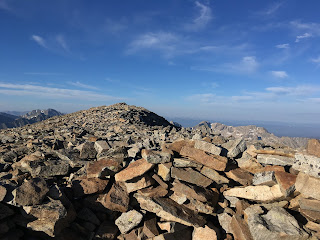 A rather broad and flat summit is reached. I was also using Derek's times in his trip report to pace myself. This loop took him nine hours, so I was thinking maybe eight. We were right on track at this point. 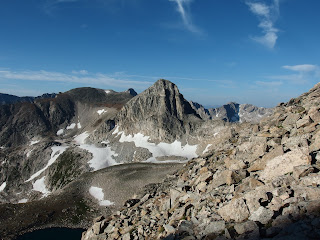 A glimpse to Mount Toll, which looked improbable. 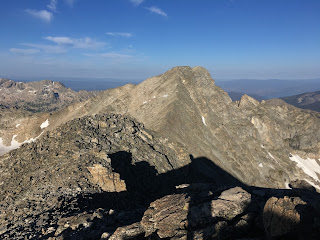 Looking to Paiute Peak. This approach is second class+, whatever that means. Some scrambly bits here and there, which are easy to avoid.On a more somber note, I took a minute to remember a friend of a friend who died from a fall in this area in July of 2015. 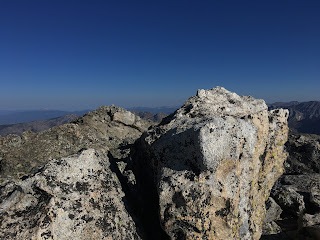 I reached the summit of Paiute quickly enough. There are two places that look like the high point, closer in this photo is the one which holds the register. The farther out one looked higher from here, but this one looked higher from there. Good to visit both to be sure.The start of the traverse wasn't too bad, though even with knowing that this route goes, it didn't look like it would from here. But looking back, you can see the weakness Derek talks about from quite a distance away. 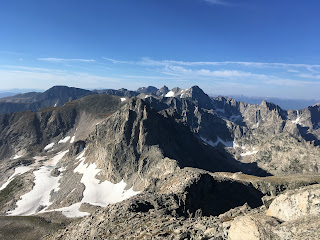 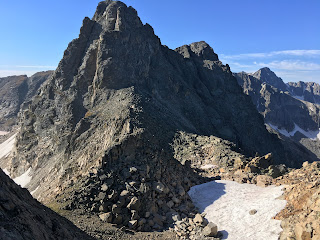 At this point, it still looked impossible. But look again, you can see the weakness from here. 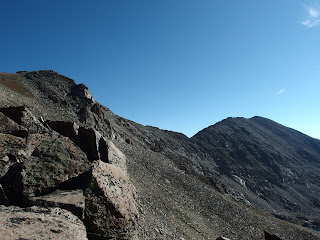 Back to Paiute and Audubon. 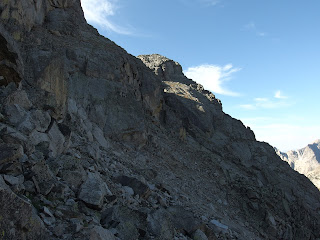 Getting closer to the weakness, almost dead center in this photo. 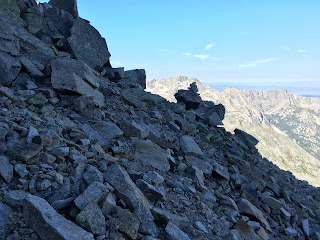 I did find a fair number of cairns along the way, but it's easy to aim toward the weakness and traverse around, going up or down to avoid any difficulties.I reached the rib of rock mentioned, and decided to stay on that up for as long as possible. When it got too hard, I got into the left gully. It looked loose, but by staying right next to the rib, I avoided most of the looser stuff and had a short jaunt to the top. I popped out south of the summit, and simply followed the social trail to the top. 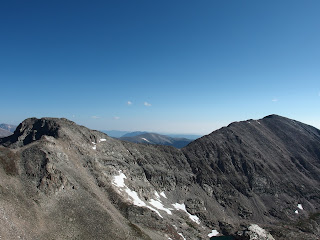 The view north from Mount Toll. 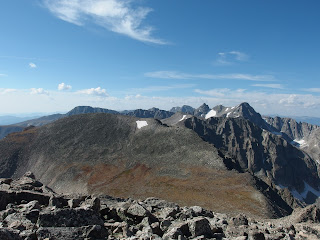 Up next was Pawnee Peak. It looked like an easy traverse. 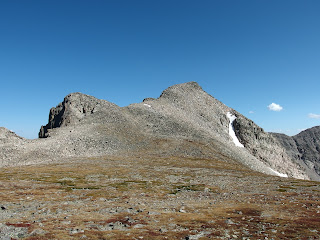 Back to Toll from the flats.And it was easy to gain the summit of Pawnee, with minimal loose stuff along the way. 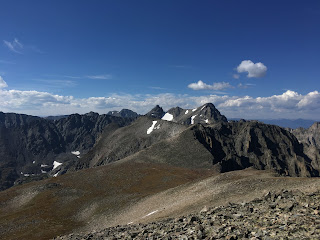 To "Pawshoni" and Shoshoni, and other points further south. 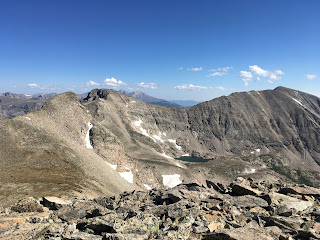 More talus is encountered before the summit of "Pawshoni", the unranked 12878 foot high point between (as you may have guessed) Pawnee and Shoshoni. 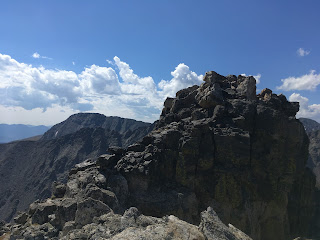 The movement to Shoshoni was pretty easy, though the last bit to get to the summit was a little airy. And, as many airy perches do, it provided a great view, here of Lake Isabelle and Long Lake. 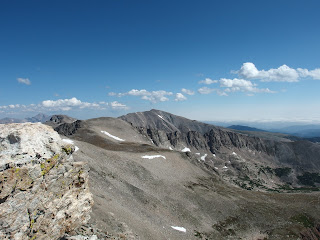 Back north. I was just over there! 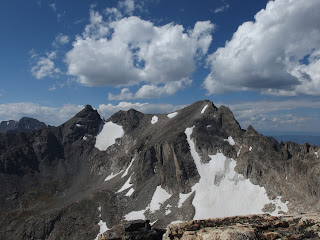 And south to Apache Peak, my first snow climb. Navajo Peak behind. 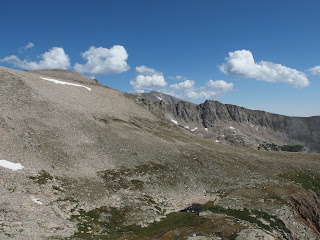 As described by Derek, I took the south east ridge down. It's a fun route with some third class movement. The most difficult point was transitioning from the ridge to the talus on your left. It's hard to see when the ridge ends, so I had to regain a bit before finding a safe route down. 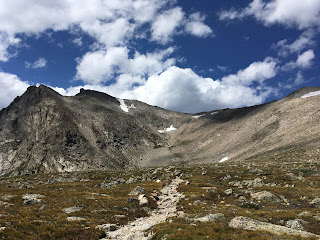 Looking back up- you can see where the ridge ends in short cliffs. Once at the bottom, it was a simple few minutes on tundra to meet the Pawness Pass trail, and from there, motor on down. 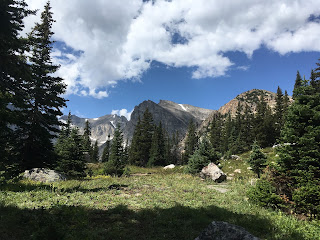 The views improve in some ways. I started seeing a few people who were kind enough to move out of the way for the runner. It's still hard to think of myself that way! 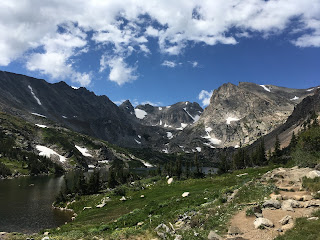