Morocco: The Hiking Experience – Towards Toubkal, the Heart of Atlas Mountains

Hike Mike
10 min read
75 views
Comments Off on Morocco: The Hiking Experience – Towards Toubkal, the Heart of Atlas Mountains 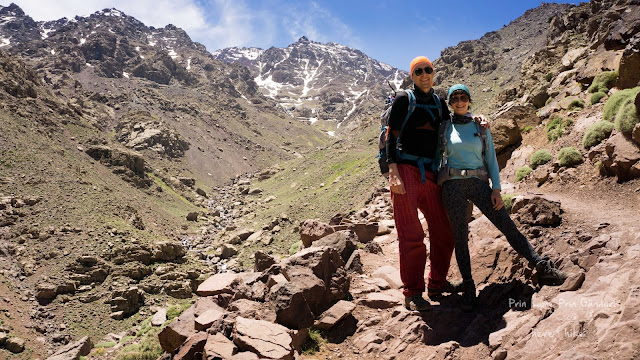 To the mountains! The whole idea of getting to a new country, on another continent and then going straight for the highest peak in North of Africa (in our case), seems a bit extravagant to us. Obviously humans, in general, are attracted by the biggest thing they can wrap their arms around and we are no different.
As I was saying in the past, Toubkal was the bait Solaris Travels used to lure us into accepting coming on this trip. Lucky for us, we didn't have to wait for long, as the mountain hike was planned in the first part of the expedition, as obviously Sorin knows that after a few days in the heat, nobody will really feel like ascending to the peak.

Our track to Toubkal was initially planned to last three days. On day one we would have ascended to Toubkal Chalet (Refuge), on day two we would attempt to go for the peak and on day three we would have to descend. Classic, just like most people do it. The thing was that if everybody was feeling OK and up to it, we could shorten the whole trip by one day and descend from the peak all the way to the base of the mountain. 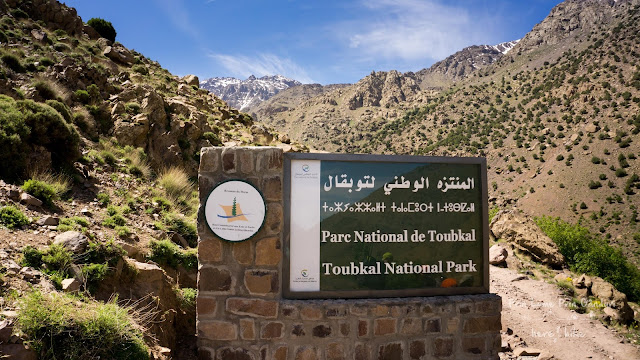 Our enthusiasm was slowly building up as we were sitting on our host's beautiful balcony and we were talking about the plan.
We prepared our backpacks in the evening and chose what we should take with us and what we should leave behind as some things were useless on the mountain. The plan was to have an early morning start right after breakfast.
We woke up to a sunny day and it seems that the weather was on our side. Since it was sunny it was also starting to get pretty hot and that never helps, especially during ascension.
Until everybody got ready Karina did her warm-up with some yoga at 1800 meters above sea level on the balcony. Soon after, we took a big breath of air, put on our boots and started our track towards our first one on one with a 4000+ meter peak. Or, well… that is what we thought at the moment. 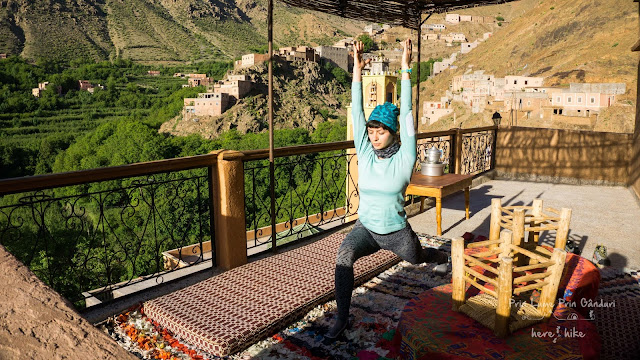 Our path twisted and twined through small settlements and through people's back yards, where everything seemed locked in time and it was already making us think about the desert. All roads are actually footpaths and life here doesn't look easy at the slightest.

Everything was very quiet and we noticed this was in part because there were no dogs around. It seems that in the Islamic religion dogs are not very welcomed around men – it is "haram" to own a dog (for whatever stupid reason I am not going to comment) but the general conclusion is that we didn't notice a single 'k9' in any village or on our hike. 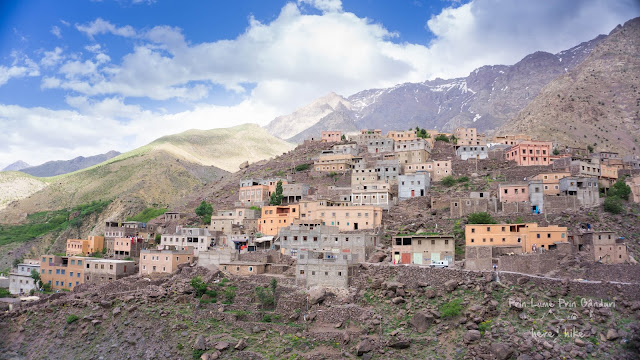 After we assimilate this landscape, that is different from what we are used to, and we store it in our small box full of memories, we get a feeling of desolation, of loneliness, of something locked in time. 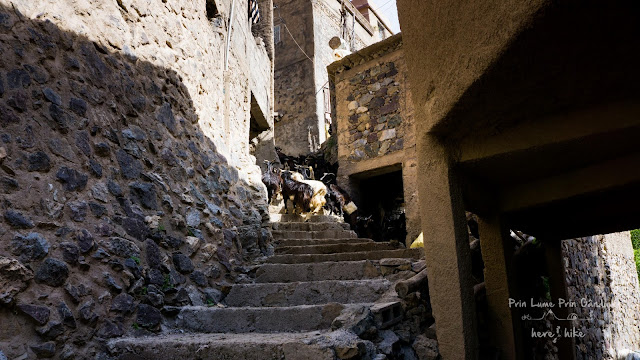 All around, we see a green valley that is holding its ground up to the arid and dry sun, that is getting stronger as summer is setting in. Up in the distance, we notice naked mountains that lack any kind of vegetation and seem unchanged by the passing of the seasons. Further in the distance everything is white. 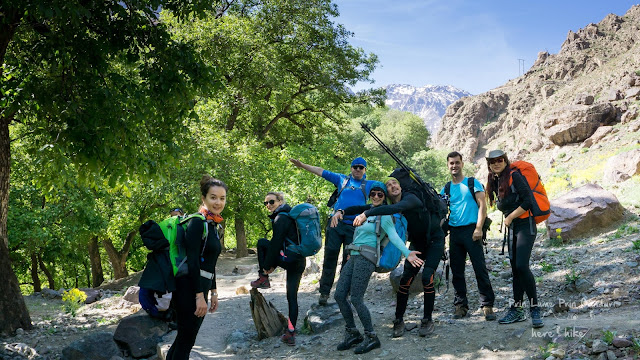 We are still taking advantage of the shade, but soon we will leave it behind. It is already so hot… 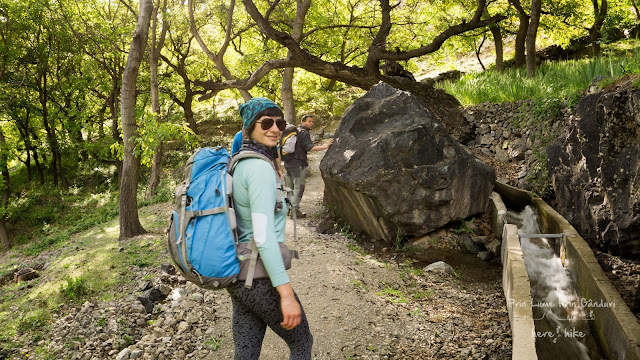 Next, we will traverse a valley full of gravel where the river has destroyed everything during a flood that happened a few year ago. No more shade, only the hot sun… 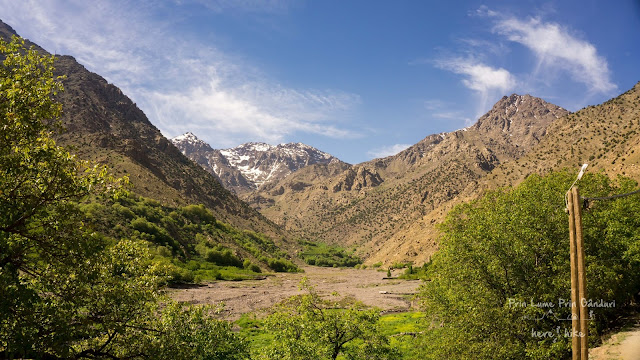 We hear the promise of fresh orange juice if we follow the footpath. Will it be cold? Will it be tasty? Will we even find any? The first stand makes its appearance. Mhhh… just as tasty and delicious as we were told it would be. We don't know how these people do it, but even in the mountains they make an excellent juice made out of fresh oranges soaked in cold spring mountain water.
This is something we never experienced before… to be well above 2000m altitude and to find so many stands with orange juice, souvenirs, snacks and different types of scarfs. It is really refreshing to find so much life on a mountain path. It is worth going on Toubkal for the juice alone 🙂 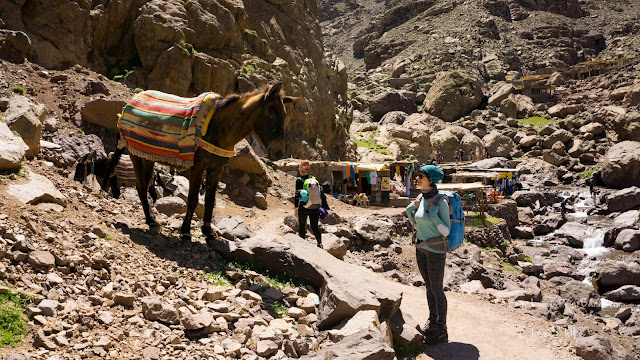 Overburdened mules, that were carrying tourist's luggage, were slowly making their way past us. So unfair! We were wondering why would you hire a mule to carry your bag when you should be capable of doing it on your own? For the people living there it is a source of income, a way of life and something totally normal, but if you are to take a step back and look at the whole thing from the outside, it is pretty cruel. If you are hiking in the mountains you should be able to carry your gear with you and if you can't then you should either train harder or you should go on easier / shorter hikes. We know that there is a certain burden that the animals won't really mind but as we saw that limit was long over exceeded.
Just a little more, one step after the other – Sorin is constantly reminding us about water. Did you drink? Have a sip! If you choose to go with him, you will see on your own skins! The fact is that he is doing an excellent job, as hydration is really important, especially at high altitude. He knows this better than us and keeps on reminding this fact just like an alarm clock. 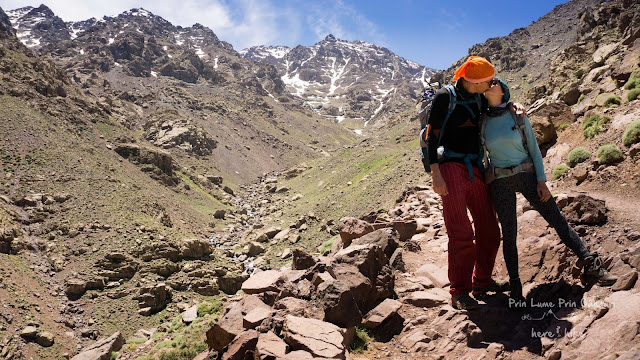 Most of the hike is on a wide footpath and the ascent is smooth but relentless. Nothing too technical, nothing too hard. With all the heat, we had optimal energy levels and because our climbing pace was pretty slow, we had ample time to chat and take lots of photos.
After we pass by a place of worship and pilgrimage, we encounter the barren and rocky alpine landscape. The white peaks are closing in and the wind is blowing just enough to make it feel right. 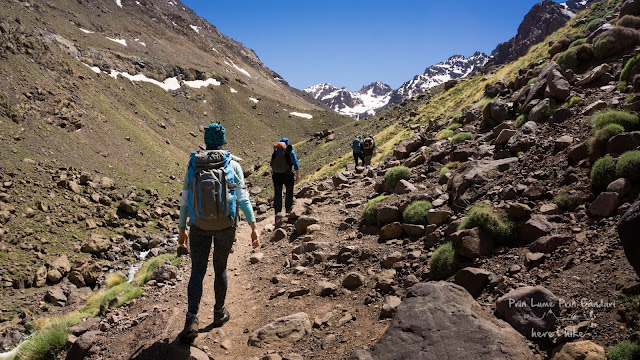 We were among the last to see Toubkal chalet in the distance because of all our discussions. Just a few more steps and we are there. Even though the place is hardly small you can scarcely see it because it blends in perfectly with the surroundings. 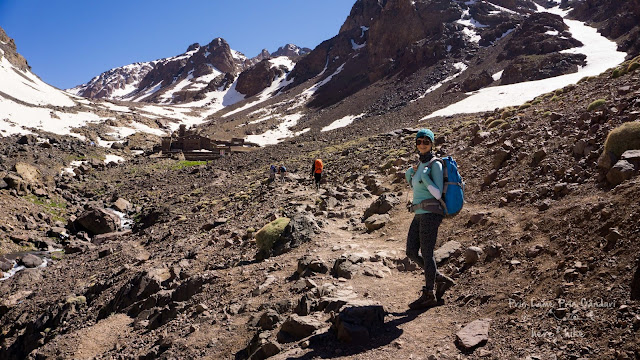 3207 m – Toubkal Refuge. Yup, this is the highest altitude we have ever reached (so far) and we have not even touched the peak yet! 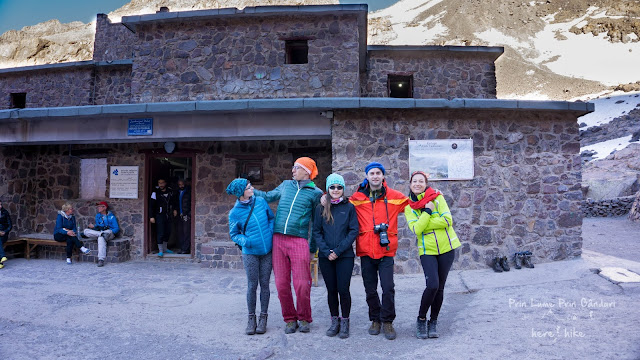 We had lunch and after it a short briefing about how we will proceed the next day when we ascend to the peak. This was the second part of the briefing that started one night earlier, during which Sorin, our beloved guide, thought us a thing or two about correct breathing techniques at high altitudes. Yup, there is some technique there too if you plan to do it correctly.
Now everything went down the drain. Karina woke up at midnight either being to cold or to hot, she was also feeling lack of oxygen and stomach aches. She tried to sleep it over but eventually figured that she really needs to visit the toilet. The visit was so long that we had to abandon the ascent. Karina was feeling really bad and as she lay on the bad she started crying out of regret of missing the peak… and everything was looking so promising one day before…
The ascent was planned to start at 6AM. 5:40AM, Karina is running to the toilet. We stayed at the chalet and after 6 hours of rest she was barely able to stand on her feet. All her hydration from yesterday was on a severe negative scale as she lost a lot of water. Around lunch time our local Moroccan guide came to us and informed us the the group had safely reached the peak and that we should descend back to his home at the base of the mountain as all the others will also join later. With lots of effort we gathered our stuff and started walking. Personally, I wasn't feeling 100% but my episode will only start later that evening. Karina managed to walk about half of the way but she was forced to rent a mule and to ride it for the remaining trip down to the house. 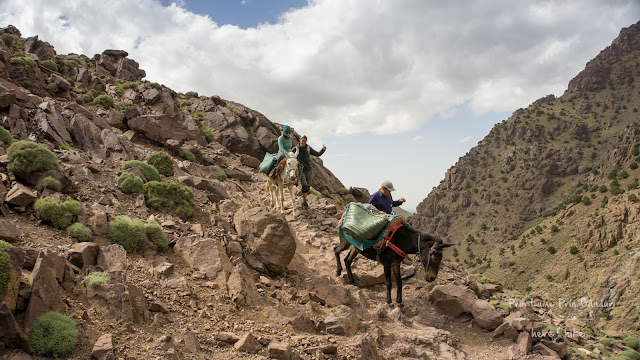 We were supposed to ride a dromedary in Sahara desert, not a mule on the mountain. Karina was feeling really miserable for this… 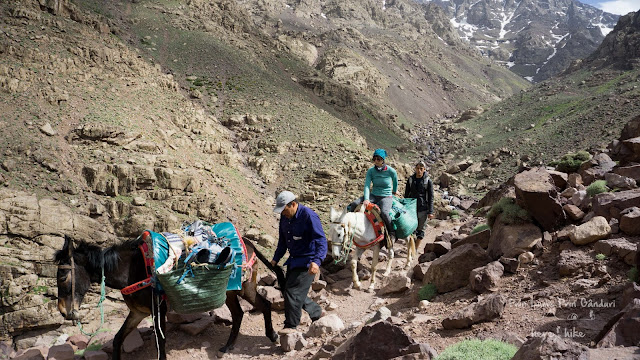 Let's get back to mules. We'll do a small side note on the subject. I don't know if you know that the mule is a distinct species and it is the result of crossbreeding between a female horse and a male donkey.
Furthermore, while Karina was riding the mule she asked out of curiosity the owner what was its name. We were curios what kind of names do they use but we found out that they don't name their animals. A really strange thing because from the oldest of times there has always been a bond between man and beast. To some extent animals were part of the family and people depended on them for their welfare. We were not judging or anything, we were only asking where and when did this bond break? 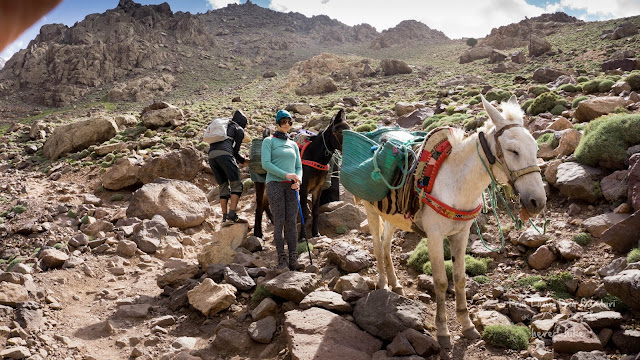 Enough with the side note. All in all they are fantastic animals and have literally saved Karina's day. They were her heroes and we planned that when we return here we will bring them lots and lots of carrots.

Closer to the village Karina was better so we continued on foot to our guide's home. The shower and sleep that followed did us a lot of good. We really hoped to reach the peak… but now we can only hope the desert will give us a better treatment. 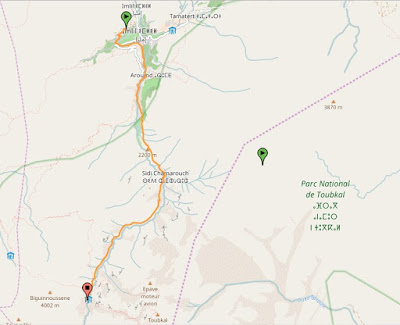 GPS Track We started recording from the village of Imlil close to the mosque but you can start the hike from Araumd. 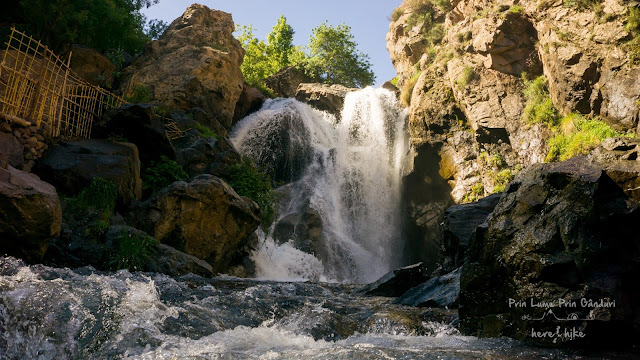 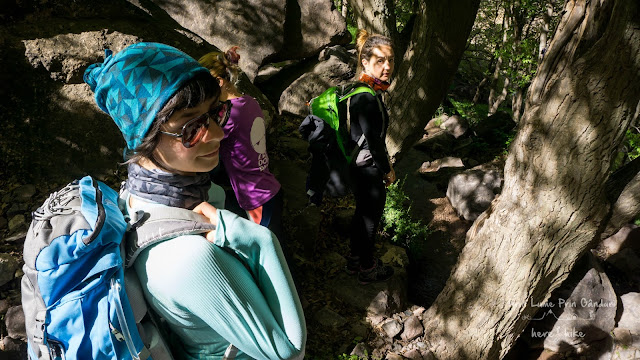 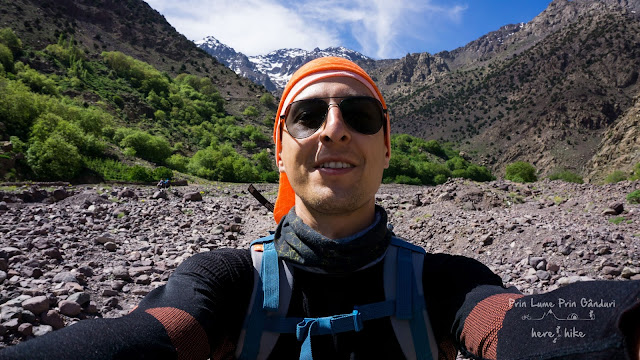 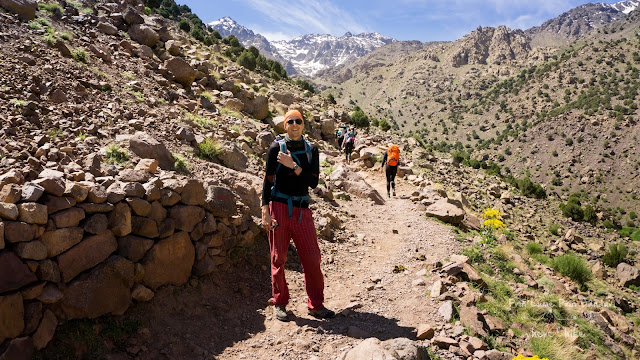 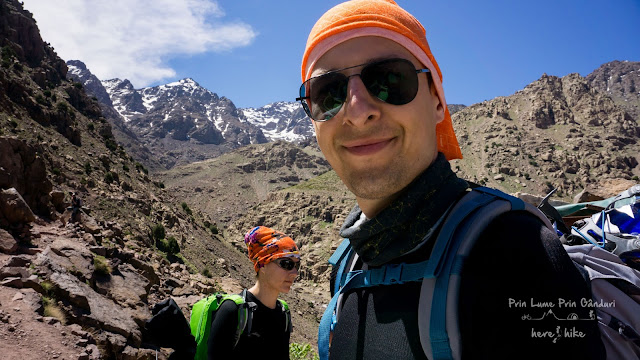 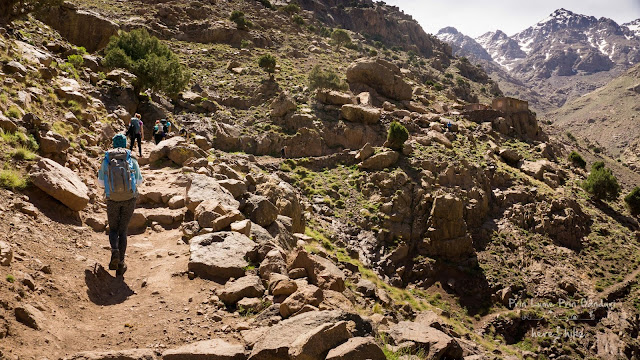 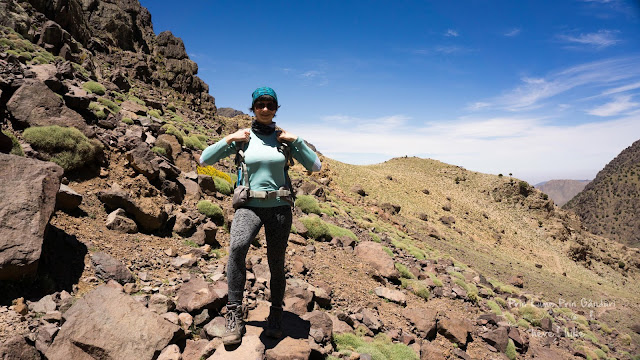 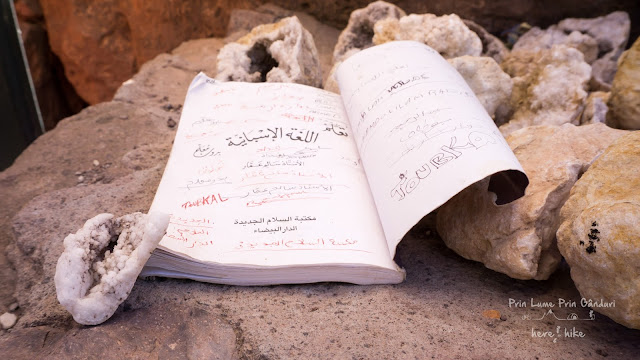 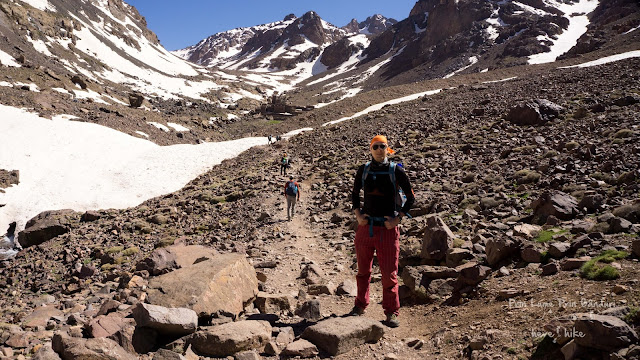 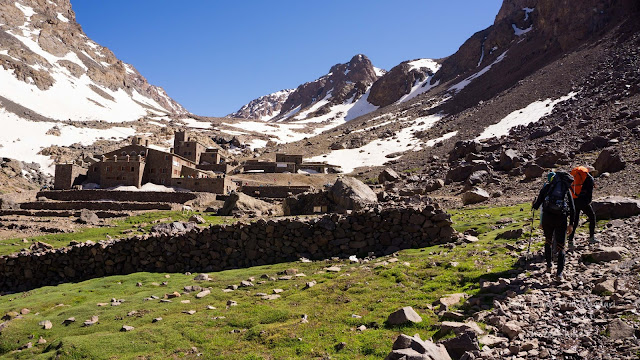 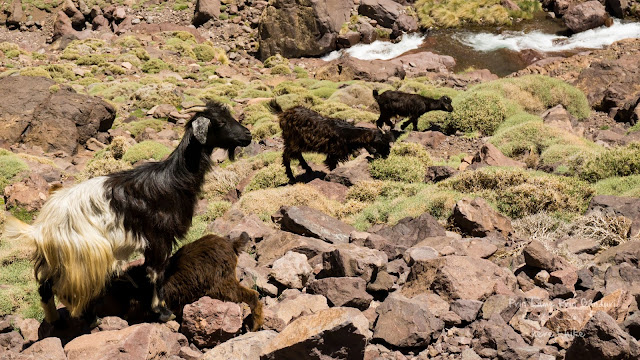 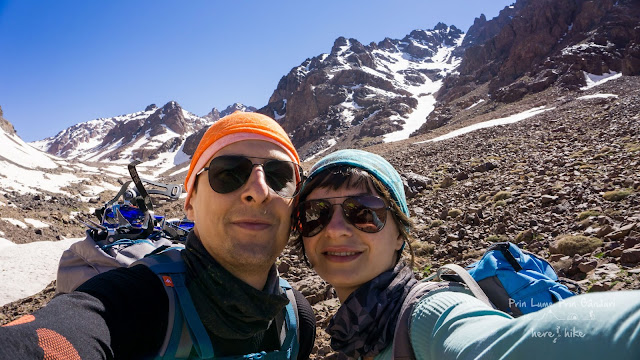 Morocco: The Desert Experience - Sahara on Camel and the Tuareg