The limestone / dolomite found in the Red Rock Canyon NCA was deposited in the Paleozoic Era between 540 to 250 million years ago from a shallow sea that first occupied this area of the globe. After that, in the Jurassic Era, around 180 million years ago, sand dunes built up over the limestone layer and formed sandstone. Next, the tremendous force of the movement of the North American continent against the floor of the Pacific Ocean created several thrust fault situations in western North America. The Keystone Thrust fault is one of the faults created by this force as the younger sandstone layers became the subduction zone and the older limestone layer was pushed on top of it. This also resulted in the two layers being pushed eastward where they came to rest locally in what was to become Nevada. The limestone / sandstone line is clearly seen along the top of the Red Rock escarpment or Sandstone Bluffs.

This special place is where the thrust fault, itself, can be observed above ground. It is one of a handful of such geologic anomalies in the world. And, it is located in the heart of Red Rock Canyon NCA about a mile upslope from the Scenic Loop High Point Overlook.

Ready for another cool early morning hike, five hikers parked at the White Rock Mountain Road Trailhead located at the junction of the Scenic Loop about 6.5 miles past the Visitor Center. The day before, Red Rock and the rest of Las Vegas had endured a "whammy" of thunderstorms that included hailstones and buckets of rain. The clouds remained low lying and created a beautiful spectacle of a sunrise as they slowly burned off over the next 3 hours. We set off up the half mile of dirt road choosing not to give in to the temptation of a jacket in the 46 degree temperatures. We knew it would warm up quickly! A quick restroom stop at the top of the road, the White Rock Hills Trailhead, then we continued up onto the White Rock Hills Trail.

We passed an old overgrown agave roasting pit, crossed a wide gravel wash, then climbed another fifty feet or so to the Keystone Thrust Trail turnoff to the right.

About ten stair steps have been built here to accommodate the hiker's climb up the embankment to the remains of an old abandoned road.

On the way up the old road, we stopped at another agave roasting pit that is in better condition than the first. To our right rose Cactus Hill; a hill that can be climbed for an overlook of the wide Red Rock Wash area. Eventually, the climb ended at another trail junction marked by rock lines. The road continues up the ridge to a fabled chop shop that operated during the post depression era. We took in the view on the other side of the ridge where red sandstone rose from the depths of surrounding limestone. The rock lines turned us in that direction downhill. The trail led us to the slab where we chose an interesting route to scramble down to the surface fault.

The foggy morning afforded deep colors for the camera. At the fault area, we noted the rare desert succulents that live under the overhanging fault layer. They are thriving this year with all the rain!

Today, we decided to take a different route down to the wash by hiking up to the ridge on the other side of the fault. (The usual route is a steep trail down the base of Cactus Hill.)

There is a very clear trail that travels from the top of the sandstone slab over and up to the ridge. On the way, hikers have to dip down into the wash then climb steeply up the hill. While in the wash, we noted a trail that led down the wash where we wanted to eventually end up. This is good info for later. Instead, we continued up to the top of the ridge where a beautiful view of the Calico Hills awaited us. As we stood there, we looked up toward the La Madre Mountains and were presented with an otherworldly view of the clouds allowing a peak to peek up and through the fluffiness. Beautiful! This made it worth the early start! The trail became more vague but we found it leading along the ridge. Unfortunately, I missed the turnoff to the right where the trail traverses down a precarious route to the wash.

Instead, we found ourselves finding our own route down the side of the hill ending in the wash. Maybe next time we will try the trail at the wash crossing. (But that means that we miss the high viewpoint of Calico Hills.) Anyway, we ended up in the wash right around the area of the white rocks. Back on the normal track of the Keystone Thrust Loop.

After another couple of photos looking back up at the red sandstone and clouds and mountain peaks, we started down the wash. Ahead of us, we could see the escarpment playing within the clouds.

We stayed in the wash all the way down past the low crossing tree trunk and resisted the urge to do the limbo! The wash appeared recently washed out. When we reached the dry fall seen in the photo below, it was necessary to be very careful since the rocks were shiny and polished. Even down the steep slope from the ridge and down the rocky wash, all five of us stayed upright! No falls. Our slow pace was perhaps to credit for that. Down, down, down, then finally, we reached the culvert under the Scenic Loop. It was also recently washed out and we bent over for our hike through a clean culvert! On the other side, the hike down the wash continued as we watched a couple of cars pass on the Scenic Loop above us.

This part of the wash opens out into the desert while maintaining its splitting gravel bed. We watched for our landmark juniper about half a mile past the culvert.

The landmark juniper tree is large and stands out in the immediate surrounding desert. This is where the Grand Circle Trail crosses the wash we were in.

Finding the juniper and the trail, we turned right onto the trail and followed it up about 1/3 mile to cross the Scenic Loop exactly at the junction of White Mountain Road. Our cars waited for us there. It was a beautiful morning and the sun was beginning to make its appearance. Along with the sun came the heat! Everyone enjoyed the two hours of fun and nature and were ready to meet the day!
3.5 miles; 850 feet elevation gain; 2.25 hours; average moving speed 1.6 mph 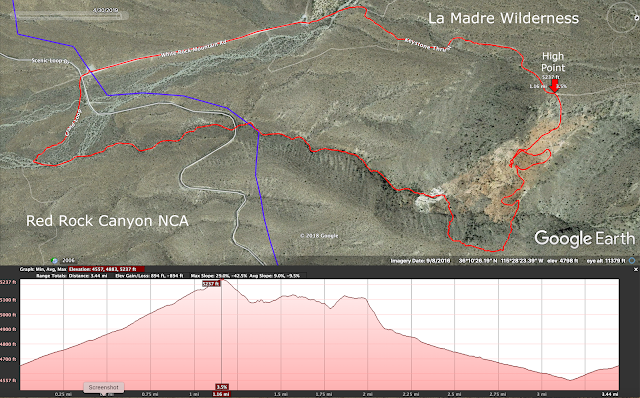 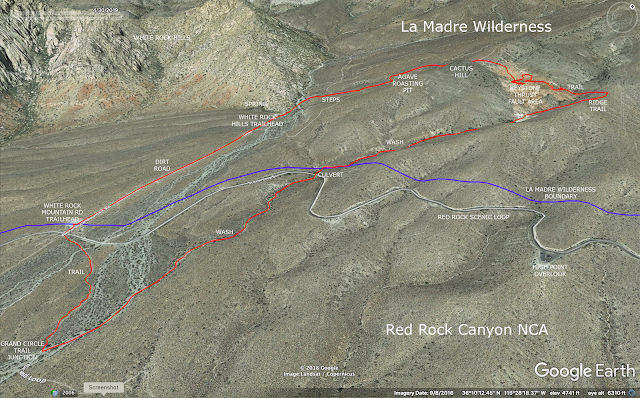 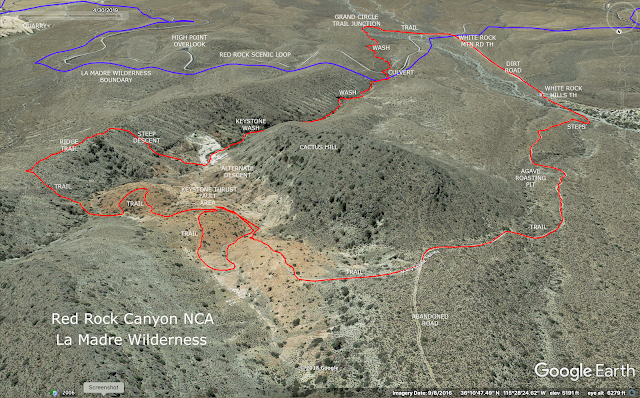