While looking through some recent trip report pictures on one of my friend's Facebook pages, I came across an image of the Uncanoonuc Mountains that I was unfamiliar with. I see these twin peaks traveling west every morning on NH Route 101, the one on the left (or South Uncanoonuc…trip report here) is populated with multiple radio towers and the one on the right peak (or North Uncanoonuc..trip report here) is simply wooded. In the photo I found, the radio towers were on the right, giving it a new perspective for me. It also made me realize that the viewpoint that this photo was taken from must be somewhat close to my office given the proximity of the Uncanoonucs to Manchester. This made Joe English Hill a perfect lunchtime destination. 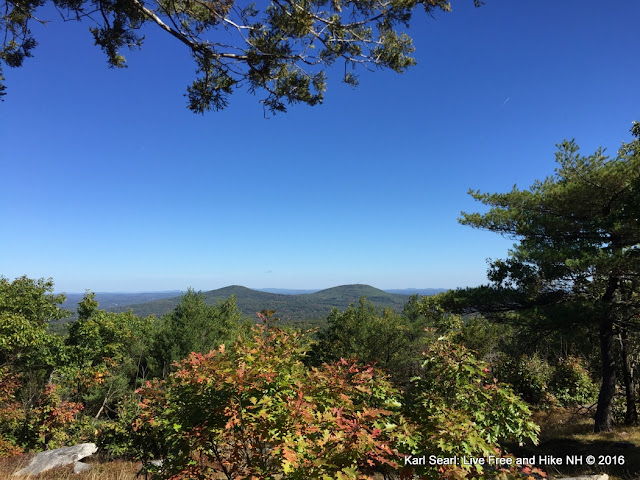 Unfamiliar view (to me) of the Uncanoonucs from the west, atop Joe English Hill
Joe English Hill is located in New Boston, NH and can be accessed by use of some gravel roads and a couple unnamed, connecting trails. Joe English Hill is actually named after a Native American who lived during the late 1600s and early 1700s. New Boston, at the time, was a settlement only populated by Native Americans. Settlers from Europe had only gone as far west as Dunstable (which is now Nashua). The Native American tribe that made up New Boston was very cautious of the European settlers, but Joe English was able to befriend them and help share resources. Hence, why he was given the name Joe English. Members of his tribe disliked the relationships he built with the white man so they plotted to kill him. Joe English, being a proven warrior and hunter, led his assassins up Joe English Hill and tricked them into toppling over the 300 foot cliffs at the top. Therefore, the hill was named after him. The full story and a very interesting history of New Boston can be found on the New Boston Historical Society website here.
Joe English Hill is also on the list of locations for the New Hampshire historical fire towers that once occupied so many peaks in this State. There's not much information on it other than it was a steel tower, it was operated by the NH Forestry Service and it was removed in 1959. More information and an image of the old tower can be seen on Fire Outlook here. 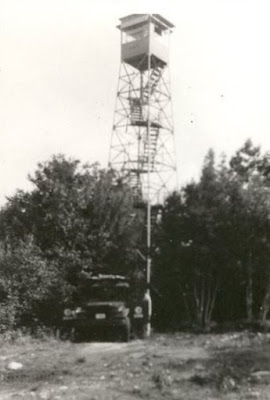 Photo taken from http://www.firelookout.org/lookouts/nh/joeenglish.htm andoriginal credit goes to Iris Baird
I started off at the end of Summit Drive in New Boston, where there's a cul-de-sac. There's a gravel road that leaves the cul-de-sac heading south and immediately passes a beaver pond on the right. After a short way, a more traditional hiking trail begins on the left and ascends gently over rocks before giving way to dirt and roots. After a short distance, this trail leveled off and dumped into a four way intersection with three other gravel roads. Looking down the hiking trail, there were many smaller birch trees that had folded over the top of the trail forming a very cool looking tunnel. 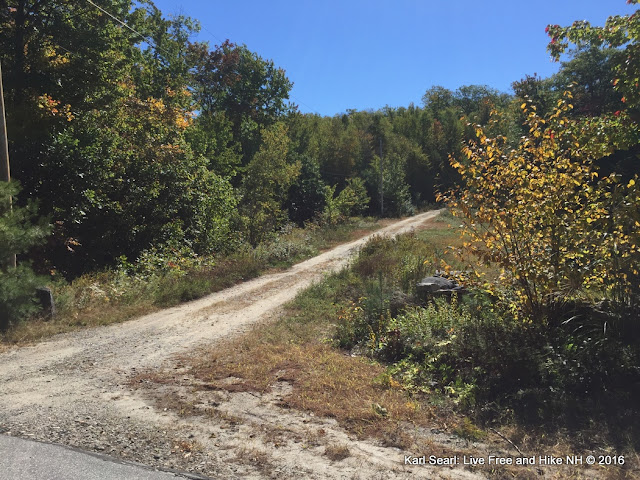 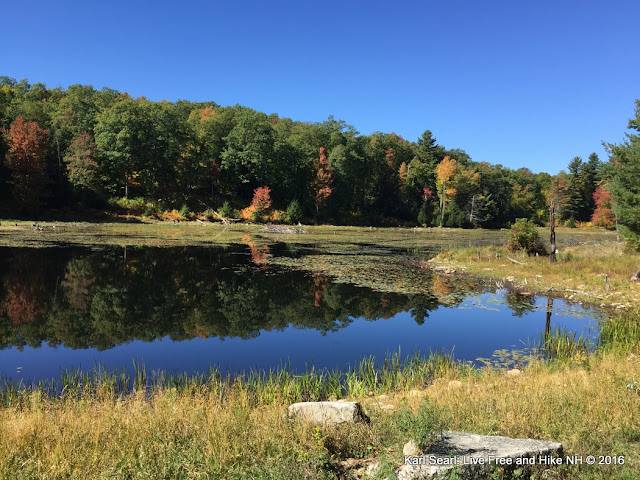 Beaver pond to the right of the gravel road upon entering 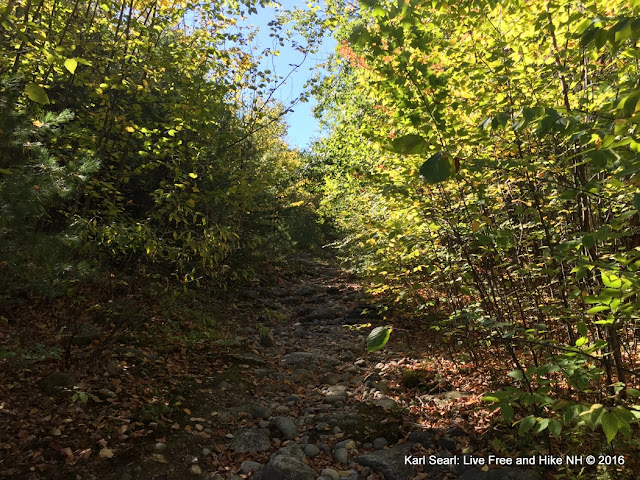 Hiking trail starting on the left of the gravel road 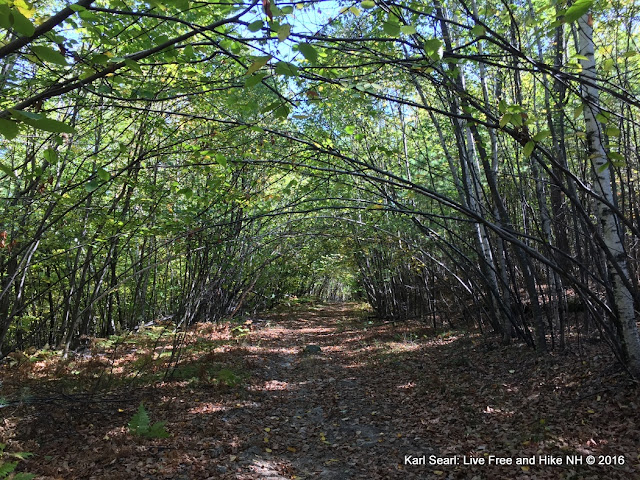 Tunnel formed from trees laying over the trail
At the intersection, it was clear there was a small business going on, quarrying rock slabs for pavers and granite stairs. There were piles of pallets, old truck beds setup as loading platforms and some old junkyard parts. After exploring for a bit, we took a left and headed up the gravel road. After ascending a bit, we hit a clearly marking property boundary in blue on the trees. At this point, the gravel road reverted back to a traditional hiking trail and the forest thinned out considerably. Soon, we made our way over the crest and found the hilltop to be large and pretty flat. 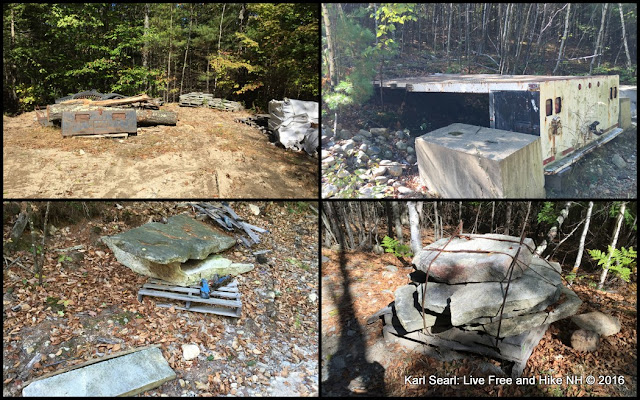 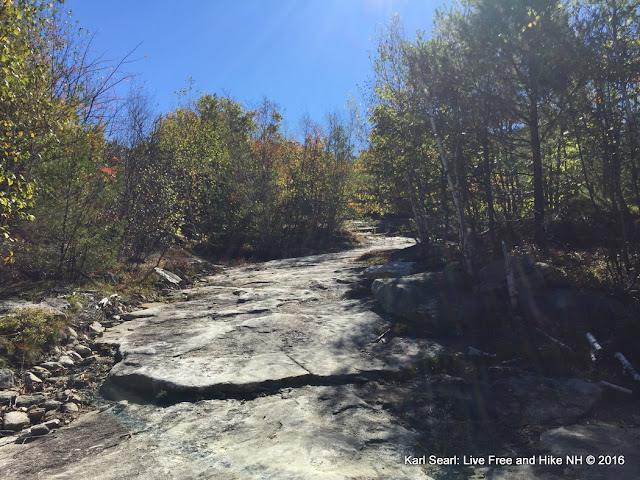 Trail turns to slabs near the top 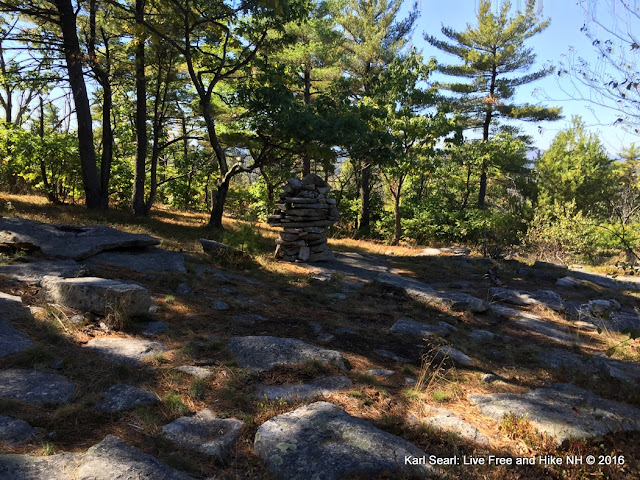 Thinned forest at the top of Joe English Hill
The summit had a small network of trails leading to viewpoints to the east (toward the Uncanoonucs), to the west (I think I could see Pack Monadnock) and to the south. Most of the viewpoints do have scrub and forest growing up and in a few years will be very difficult to get any good views. At the viewpoint to the east, someone had setup two Adirondack chairs between a fire pit. There was also a sign educating visitors about the raptor migration. It's a great location to sit and let some time pass. 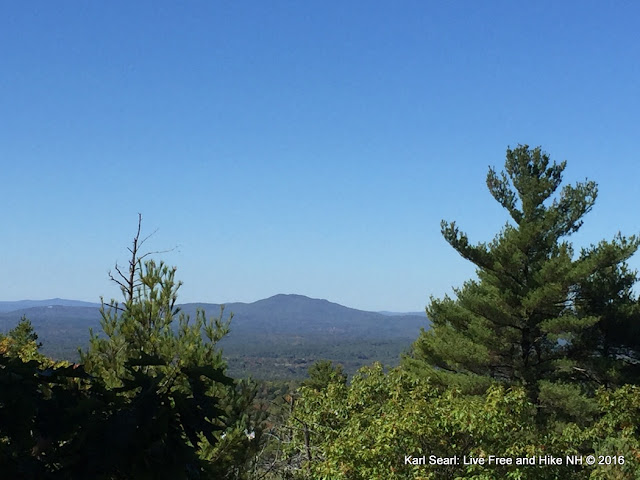 To the west, I believe this is Pack Monadnock 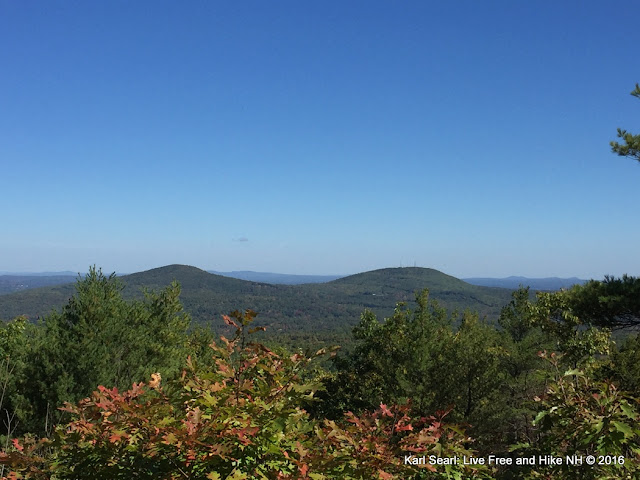 Uncanoonucs to the east, and the Pawtuckaways on the far right in the distance. 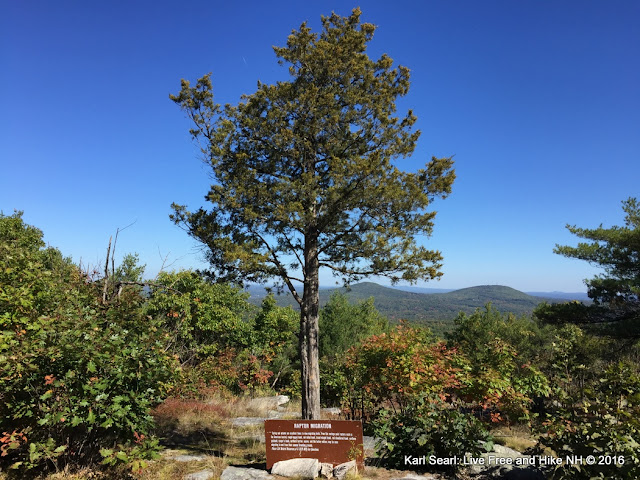 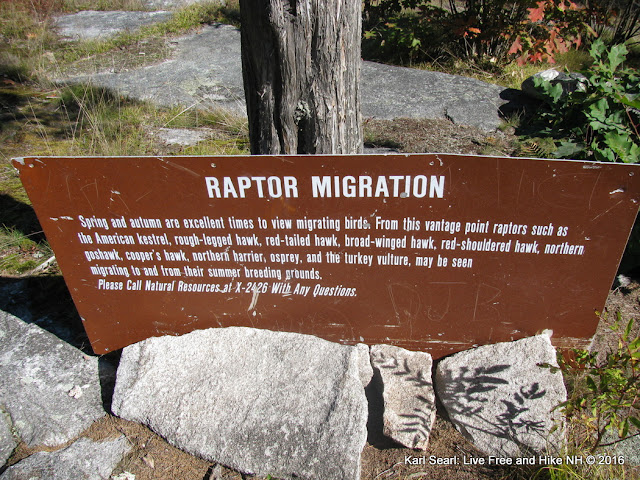 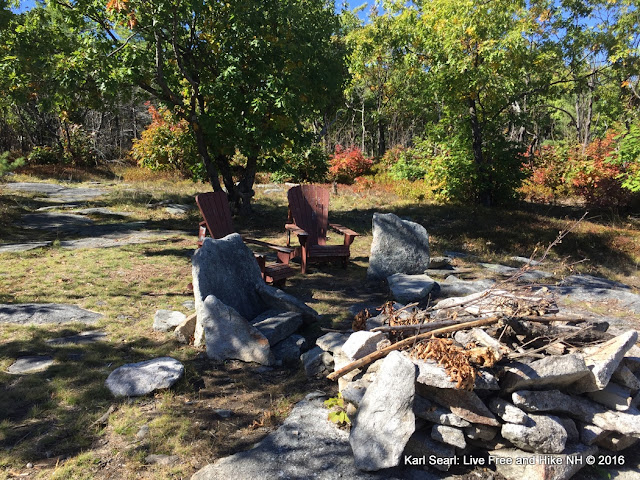 Adirondack Chair sitting area toward the east and the Uncanoonucs
There's a large pile of rocks, not really a cairn as they weren't organized very well, at the hill's high point. I spent a lot of time looking for evidence of the fire tower that once stood on the summit but was unsuccessful. There are no foundation blocks or guide cable anchors left from the tower (that has been documented anyway). I was told by a friend that there's nothing left behind but I feel there must be something up there. Unfortunately, the summit top is so large that it's difficult to determine where the original location is to execute a thorough investigation. Maybe someone who reads this post can help me determine where this fire tower location specifically was. 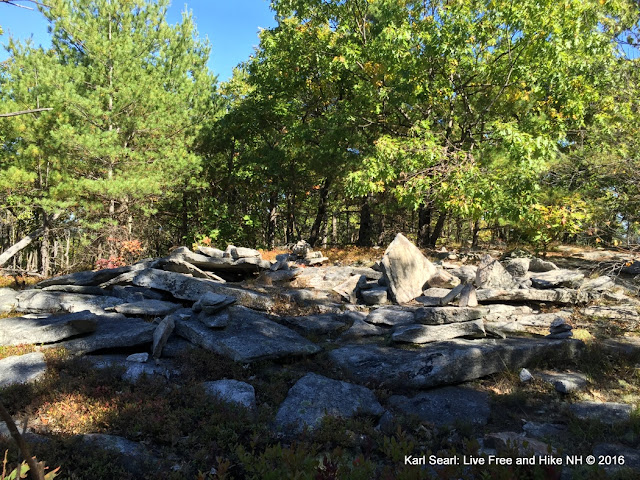 Summit Rocks
Joe English Hill was definitely worth the drive during my lunchtime break. The hill's summit is pretty open and there are nice viewpoints in many directions. It's also rich in history. I can say the hike up is mostly enjoyable with exception to the short portion where there was a quarry business being run. This portion was a bit sketchy and made me feel, as a hiker, I had trespassed into someone's operation…even though nothing is posted and no boundaries restricted.
Definitely check out Joe English Hill if you can. It's a New Hampshire historical fire tower location and a New Hampshire town high point for New Boston. These are two lists that are gaining popularity for peak baggers!