After a several year hiatus from Wild Basin, this year has marked a return to the place where it all started. Earlier in the year, I decided to "run" Isolation Peak in preparation for the race. While I say run, it was really more of a fast hike, particularly with the off trail time after Bluebird Lake.It was a rather pleasant and peaceful day, and it was awesome to revisit the area that captured my imagination years ago. A return to the memory of some big and fun days.It was several years later on a pretty big day with Dan that I finally got to see the west side of Isolation Peak. Like many others, it was interesting to get a different perspective on the mountains I was so familiar with from the east. And that west ridge looked extremely fun! With other goals and wants, a return has taken a few years, but another friend proposed a long and adventurous route to visit Fleur de Lis and Mount Craig. We'd start and end at the Wild Basin trail head, going up and over Isolation, taking the west ridge out and back, with a brief drop down into Ten Lake Park. My kind of day, it took zero arm twisting to get out for these repeats!We met and started just as the sun was rising, headlamps not needed, but brought along just in case. Dave beat me to the trail head by a few minutes, and said one person had started before us, though we never did see them. In fact, the only people we saw the whole day (besides each other), was a couple near Bluebird Lake who had camped at the site close to there. 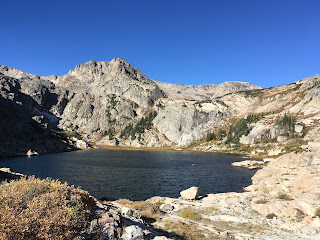 Bluebird Lake, Ouzel Peak.
With my visit earlier in the year, it was pretty easy to follow the cairned social trail around Bluebird Lake and to the bench above Lark Pond and Pipit Lake. There's some bushy stuff in this area, but it's generally easy to avoid.
We stopped at the beautiful and isolated Isolation Lake for a snack and water. While there were possibilities on the other side, this was the last definite water we'd come across for a long time-possibly until we made the return trip and went by this lake again.
We started up the scree slope towards Isolation. 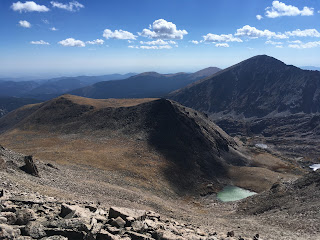 Somewhere up there, Mahana Peak and Copeland Mountain behind.
We made it to the summit of Isolation relatively easily. There aren't any technical difficulties along the way, it's just the gain to get there. 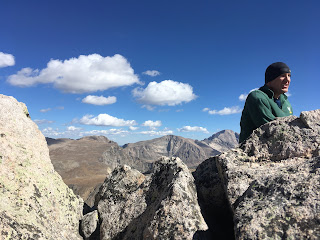 Dave on the summit.
He'd copied and brought the route description from Lisa Fosters book along. This suggested staying on the ridge direct as fourth class at the easiest, with multiple towers to go around. With this in mind, we decided to drop down a little and contour around, staying at around 12700 feet. The terrain was pretty manageable, with just a touch of loose stuff here and there. 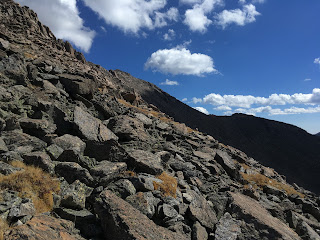 Looking back towards Isolation and those deep blue skies that only seem to happen in September. 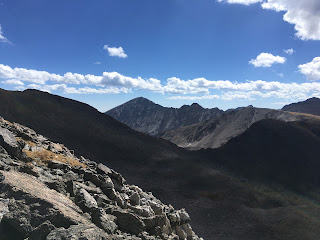 Copeland Mountain.
We reached a flatter section and headed north to meet the ridge, which was outstandingly fun third class. 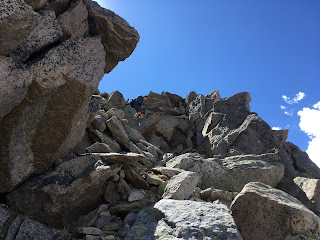 Dave descending the ridge.
This ridge was pretty awesome, with fun and engaging route finding. As we kept remarking, we'd yet to hit any real difficulties, and the day was going swimmingly.
On the way out, we bypassed the small lump west of the ridge at around 12200 feet on the south side. On the way back we stayed up higher on it and it was fine either way.
We crossed a small social trail at the saddle between Isolation and Fleur de Lis, then started up. Though this peak is second class, the easiest approach is from the west side, and we found a little bit of scrambling to get to the top. 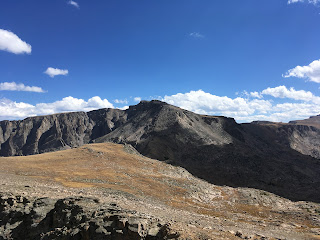 Looking back at Isolation.
We continued on to Mount Craig. From previous experience, I knew we should stay to the south of point 11902, as it's scrambly and difficult to go over. On the other side, we took what was probably not the best route up. This was probably the hardest few moves of scrambling of the day, or so I felt. But it was short, and we were soon back on tundra. 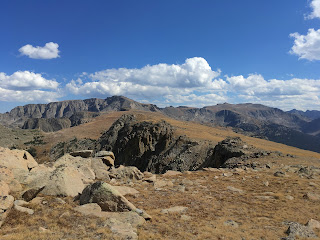 Looking back from near Mount Craig. 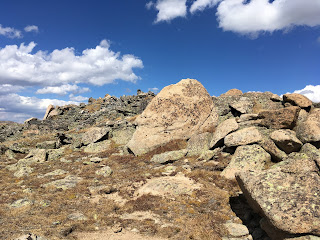 Right near the summit.
Well, it's probably easier to get Fleur de Lis and Mount Craig from the west, but I wouldn't say that day is "easy". I do vividly remember my previous visit, with friend and oft hiking/running partner Dan. Near the end of the day, he told me (I *think* in jest) that if we'd done the loop we did in reverse, he would've never spoken to me again. At the very least, that would've made for an awkward ride home.
But here Dave and I were at our furthest point out. Now all we had to do was turn around. And go all the way back. We decided to drop down into Ten Lake Park and take a promising looking gully up, and skirt around Isolation. (Now that I'm writing this a few weeks later, I think that was the intention here.) 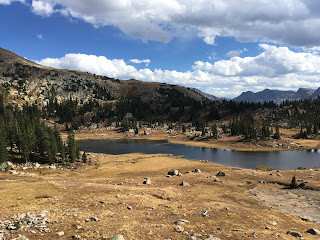 Beauty. Of course, just as we were wondering aloud how long it had been since someone had been there, I found a German made Swiss Army style knife on the ground. It had been out for awhile, but at least we can say people sometimes come here. And I again learned the hard lesson that when water is getting lowish and the next definite source is a good bit away, you should fill up. Figured I'd know that now, and I never seem to do it. Ah well, not having water for an hour didn't kill me! 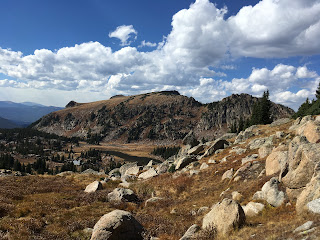 Now looking back on Mount Craig. What an awesome day!
We were both getting tired, and as we got back towards the west ridge of Isolation, made the choice to just go back the way we'd come, but to possibly stay on the ridge the entire way. Fosters book calls this fourth class and talks about bypassing towers to stay direct on the ridge.
I felt and we talked after that we both felt this ridge was no more than third class, and we didn't find any towers to bypass. So I'm not sure where her description came from. Sure, there's some route finding, but it's pretty easy to stay right on top. "Easy".
We made it back to Isolation, and ended up meeting the south ridge maybe forty vertical feet below the summit. Since I have a sick desire to visit isolated peaks multiple times in the same day from different trailheads/directions/whatever, I climbed back to the top while Dave descended and waited for me. 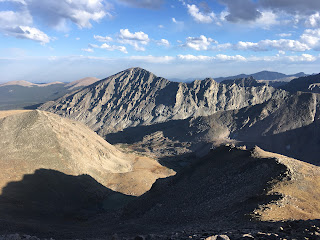 The same view as earlier, hours later. Different and just as spectacular. 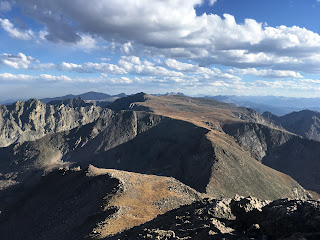 The south ridge in the afternoon.
We descended back to Isolation Lake, where we were both happy to filter and drink some water and eat some food. Though we were still a good distance from the trailhead, there was finally some sense of being almost done, at least for me. There were no more major elevation gains, and while there was still some off trail time, we were past the hardest and talusyest terrain. Soon we'd have a trail, and from there we could just motor on down.
We wanted to see how far we could make it without headlamps, but it wasn't much beyond Bluebird Lake. Ah well!
Now with food and water in us, we enjoyed some conversation on the way back. I think we were both suffering a bit for various reasons going back up over Isolation. But we identified the problems, corrected them, and got over it.
I generally like my work schedule and love my job, but after days like this I wish I had more weekend time available. This was my second time hiking with Dave this year, and what awesome days they've been with a more experienced partner. It's been particularly nice to hike or run with some new people this year, and to find some other kindred spirits out there.
We got back to the trailhead and got situated before saying our farewells. At least this time it was me who had the shorter drive home, I was definitely tired!
While this day was all repeats for me, I certainly had an awesome time going along. I'm sure not many people will venture in far enough to do the west ridge of Isolation Peak, but if you are looking for a fun scramble, it's pretty great. Though not on the map, there is a pretty good social trail all the way up to Fifth Lake, and it would be pretty reasonable to do from there.
Link to hike map/GPX on Caltopo (like last time, there might be some bonus miles here).
Isolation Peak, Fleur de Lis, Mount Craig, and Ten Lake Park from Wild Basin:
Bluebird Lake, 10990 feet: 7.4 miles, 2490 foot gain. Second class. Moderate+.
Isolation Lake, 12000 feet: 9.5 miles, 3500 foot gain. Second class. Strenuous-.
Isolation Peak,13118 feet: 10.25 miles, 4618 foot gain. Second class. Strenuous.
Fleur de Lis, 12250 feet: 12.3 miles, 3750 foot gain. Third class. Strenuous.
Mount Craig, 12007 feet: 14.4 miles, 3507 foot gain. Third class. Strenuous.
Ten Lake Park, 11228 feet*: 15.5 miles, 2728 foot gain. Second class. Strenuous.
Isolation Peak, 13118 feet: 18.7 miles, 4618 foot gain. Third class (from the west). Strenuous.
Isolation Lake, 12000 feet: 19.6 miles, 3500 foot gain. Second class. Strenuous.
Bluebird Lake, 10990 feet: 21 miles, 2490 foot gain. Second class. Moderate+.
As a whole, this day covered 29.15 miles (maybe a little less, again got some GPS interference) with 8794 feet of elevation gain in up to third class terrain. One of the big difficulties you'll face is the time above treeline, which is from around mile seven to mile 21. Water is scarce, make sure you take advantage of what you find when you find it. Strenuous+.
*This is the approximate elevation of the lake we were at.