It is probably a good thing I am almost done with the PCT. Lately while hiking, I've felt sort of…burnt out. Instead of sauntering along enjoying the views, I have thought things like: Okay, it should take me two hours from here to get to the lake. Or: I've hiked ten miles, six to go. I think this is only natural when you've spent the past ten years in a quest to finish a long trail, each time bound to a plane ride or a work schedule which dictates you go fast and far. Yes, I could have hiked less miles, but then it would take me twenty years! And sometimes it isn't possible on the PCT to stop after only a few miles–you would drink up all of your water in some of the dry sections.
I headed up to one of my Wallowa Mountains faves, Ice Lake, the other day. I should back up and say that I have a love/hate relationship with this trail. A omnipresent pack station takes tourists partway several times a day, and the hooves (and hiker feet) have worn the trail down to the bedrock, forcing hikers to carefully negotiate jagged rocks. It gets dusty and annoying at times. But it isn't really the trail. This lake has grown in popularity so that it gets swarmed with backpackers. Most of them are fairly new at backpacking, or so I imagine by the enormous packs they carry.
Of course, swarmed is a relative term. On this Sunday I saw twenty people, which to me is a crowd. I passed most of them until I came up behind a woman who was clearly trying to stay ahead of me. Which is fine, whatever, but she was cutting switchbacks to do it. Also, she seemed to have forgotten her pants. She was wearing only thong underwear. Is this a thing?
The lake was still mostly frozen and beautiful as always. I'm always glad I come here even if a guy with a drone plopped beside me and proceeded to fly it over the lake. Not only is this illegal, but you'd think you might ask if it was OK to disturb someone else right next to you. (Yes, I am in fact a Judgy McJudgerson).
I didn't stay long. I was still in long hike mode, clipping away at the miles. On the scale of people who hike to camp or camp to hike, I typically fall in between the two. I like to hike all day, but I also like finding a nice campsite by a lake and swimming, reading, or exploring around there. I want to get back to that for a while. I know just the way to rehab. Go out for a hike of an unknown distance with only a map. Travel cross country so that it takes longer. Climb over trees, scramble up slopes.
So I did. But that's a story for another day.
Are you a hike so you can camp person or a camp so I can hike person? 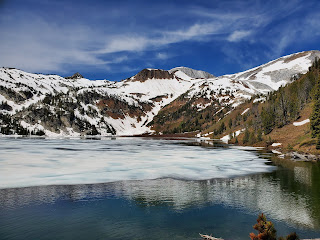 Hiking the Pacific Crest Trail, the rest of Section F, CA, Tehachapi to Hiker Town. Third time is the charm