Chronologically, this day actually took place before the previous post- it was my last longer training run before the race. My goal for the day was both to run the loop at a reasonable pace, and summit the two Boulder County/Indian Peaks Wilderness peaks near the continental divide, since I am pursuing both of those lists. Those peaks are 12660, which is north of the High Lonesome Loop, and Skyscraper Peak, which is east of the route. Looking on FKT, someone has done this loop in an unbelievable two hours and eight minutes. That's way faster than I'll ever go!I drove through Ned and then Eldora, not quite knowing where I was going, and the directions I was following seemed a little off for what I was actually seeing. I kept going straight and eventually found the side of the road parking for the Hessie Th. With 4wd, you could get all the way to the trailhead, but I don't have that.The run started at a nice easy pace, and I felt like I was moving well. I found the trails well marked and easy to follow. 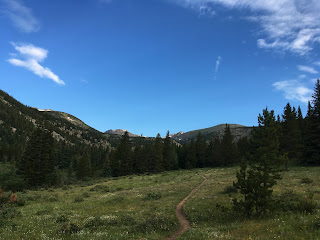 An open meadow provided some nice views of the day ahead. 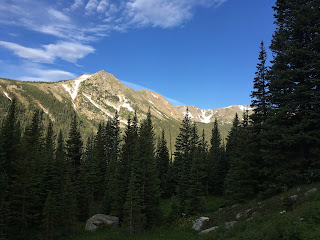 The alpine!
I was feeling pretty good, and has passed Jasper Lake when I heard a huge splash from my left. It has to be either a person who jumped in the water, a person who threw a large rock in the water, or an animal. Either way, I wanted to know. 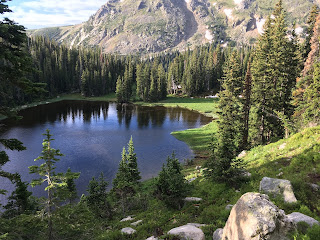 I took a brief detour to find this small body of water… And a female moose in it dog paddling in circles! It was the first time I'd ever seen a moose acting playfully. Normally they just stand there and stare at you. It was super cute!
I watched as she swam, made her way back to the bank and got out, and then shook off much like a dog would. She made her way back into the forest, and out of my sight. How lucky I was to be there and witness this moment!
The trail continued up, and I met treeline. While the trail was well defined, there were alot of willows overhanging, and it had rained the night before. I got wet, and with the slight wind, got cold quickly. 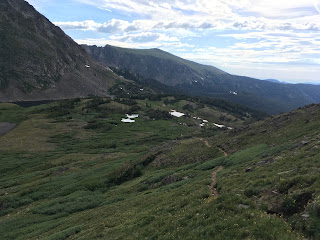 Looking down into the basin. 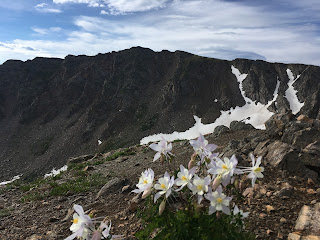 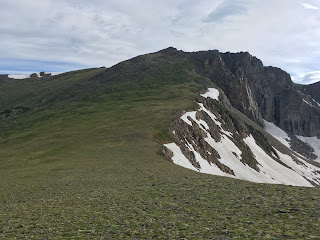 Looking ahead to the steep climb up 12660. It went. Not very quickly, but it went. 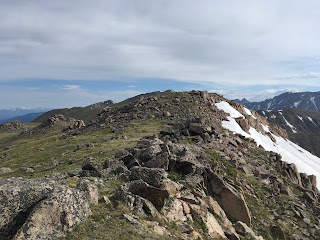 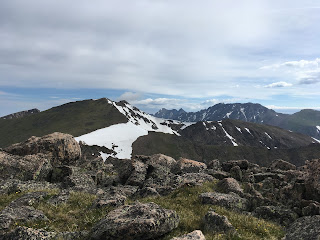 Points north, including Mount Jasper. That sight brought back some memories. 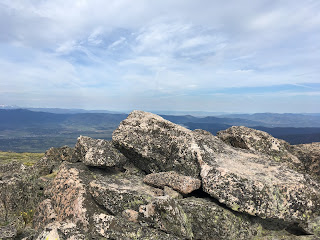 The summit of 12660, no register that I could find.
The descent south went quickly, with only one slip and fall on my butt. Hilariously, I tripped on a rock in the flatter section of tundra and went head over heels. No injuries other than wounded pride and a wish someone else had been there to see it, as I'm sure it would've been pretty funny to witness. 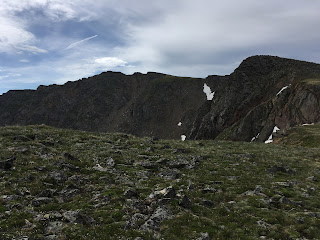 Looking to Skyscraper.
There was a pretty good wind, so I made sure to keep on the south side of the ridge as I went out to the summit. I took a short snack break there and enjoyed the scenery before moving on. 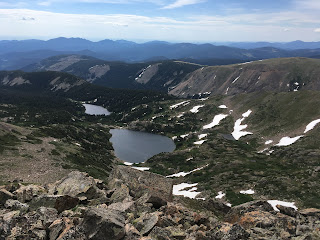 From Skyscraper Peak.
I continued generally south on tundra before meeting the trail proper. I met a group of hikers near Rollins Pass, and continued on. The run down to King Lake was fun and fast, with some now thankfully dry willows overhanging the trail once again. 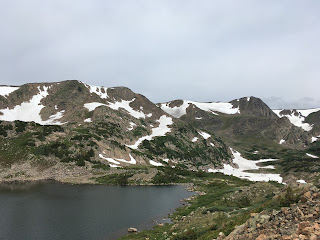 King Lake. I was a little unclear of where to go, particularly at the next stream crossing. 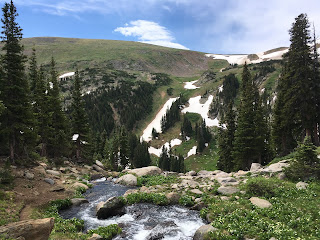 There was a trail along the stream, but I could see one ahead of me as well (which would be off left in this photo). I went for the trail ahead, which turned out to be the right choice. I read a trip report somewhere where the person took the trail next to the stream and got stuck in some bushwhack hell. Don't follow the trail next to the stream!
The downhill from there on was pretty mellow, and I was able to find and fill up on some water since I'd run out. I had to use tablets since I was having some filter issues. As it turned out, my 30 minute timer went off within 5 minutes of the car, so I probably should have just gone thirsty.
Also people were SERIOUSLY AMAZED to see someone running down the trail. It's rocky, but nothing hard. To me, it was nothing special.
I got back to the car in just under six hours, well slower than the FKT, but at a reasonable 17:39 minutes per mile pace. Remember, this was training to do that pace all day long, so going faster wasn't necessarily a goal, though it would be fun to go back and try for a quicker pace on the loop only. The off trail time also makes things slower.
While I was here, I'd also mapped doing all the Magnolia Road Boulder Peaks, but now felt unmotivated. But I had plenty of time and I already did the drive here.
First I headed to Hurricane Hill, which is slightly north of Ned. Despite my trepidation about this one being on private property, I didn't see any signs (save for the no trespassing sign on the driveway going up to the residence near the summit) and there weren't any fences. I parked at a small pullout at the bottom of the driveway, and headed directly for the summit. It couldn't have been more than fifteen minutes round trip. 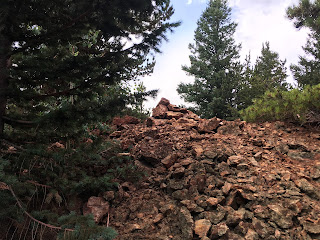 Hurricane Hill, 8770 feet.
I got back to the car and headed back into Ned, taking 119 south to Magnolia Road. Up next was Tungsten Mountain. I parked on a small pull out and crossed a fence- after I found out if you follow the fence west, it ends and this can be done without the short trespass. This was another pretty easy and short jaunt from the car. I apparently neglected to take any photos.
Up next was Winiger Peak. I eventually found the trailhead, after I felt like I'd driven past it. I parked and followed the road/trail past the sign for a short time. When I found a trail on the right shortly after, I took it. I followed that for a bit, but not knowing where precisely it went, I decided to head off directly through the rather open forest for the summit. The only annoying thing was the 1.5 million grass seeds that got into my shoes. 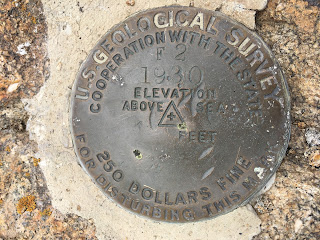 Benchmark near the summit. 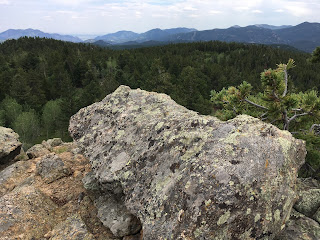 The summit and higher peaks to the west.
I took a pretty long break here; I was planning to get back in the car and visit the two remaining Magnolia Road peaks, but the day was getting on and I didn't want to get back home super late. I got back to the car and decided to call it good.
This was a great day, largely a pure run with just a touch of off trail on tundra/rock above treeline. As I'd been feeling that I wasn't going at the speeds I wanted, this day was also a good confidence booster. As it turned out, my pace at the race was actually lower/faster than my pace on this day, though still a little slower than I'd hoped for.
Link to run map/GPX on Caltopo.
Peak 12660: 8.6 miles, 3682 foot gain. Second class. Strenuous-.
Skyscraper Peak, 12383 feet: 11 miles, 3405 foot gain. Second class. Strenuous-.
Hurricane Hill, 8770 feet: Short, not much gain. T+ for trespassing. Easy-.
Tungsten Mountain, 8930 feet: Slightly longer, a little more gain. T. Easy+.
Winiger Peak, 8980 feet: A few miles, a little more gain, but no trespassing worries! Moderate-.