For a few years now I have wanted to venture to Egypt Lake via Healy Pass but attack it out and back as a day hike. Now was the time to get it off the back burner so I was happy to find a friend who was keen to give it a go. It's a long day with a bunch of elevation gain late into the day when you could already be tired from what was accomplished so far. Most people do this trip as a backpack trip, there is a back country campground there along with the Egypt Lake Shelter. There is a song that I hear lots these days and maybe the words say it all with the objective I put forth for the day, "she's sweet but a little bit psycho!" I wanted to be off into this place that seems and sounds so far away, where you cross the bridge over Pharaoh Creek leading to Egypt Lake & Scarab Lake & Mummy Lake and stand in front of Pharaoh Peaks. 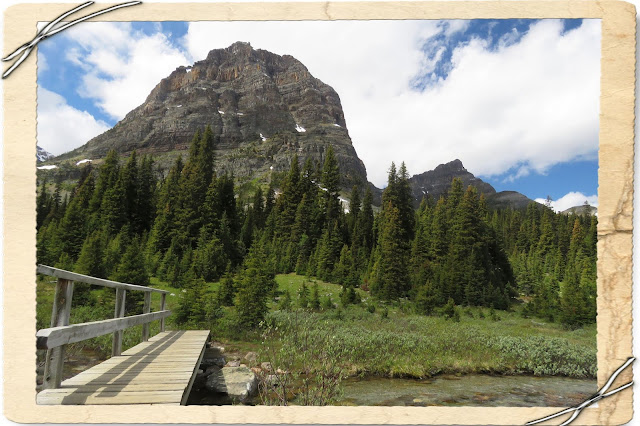 We started at the Bourgeau Parking Lot and followed the Healy Pass Trail through sprinkles, mud, rain and even snow. We wondered what we were in for today, not having seen these conditions listed in any weather reports. We stopped to take shelter, to dry off, to question what the heck! Then just like that, out of the blue comes the blue. Our spirits were lifted and we carried on. It was so pretty when we arrived at the bridge crossing where the larch trees and meadows begin. 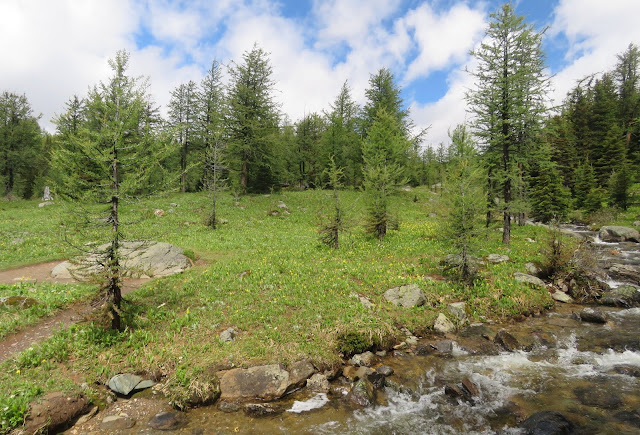 The ground was a carpet of glacier lilies….. 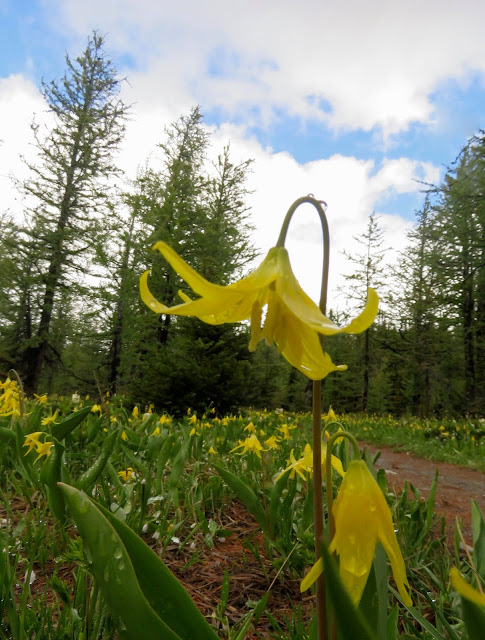 ….with patches of alpine paintbrush scattered here and there! 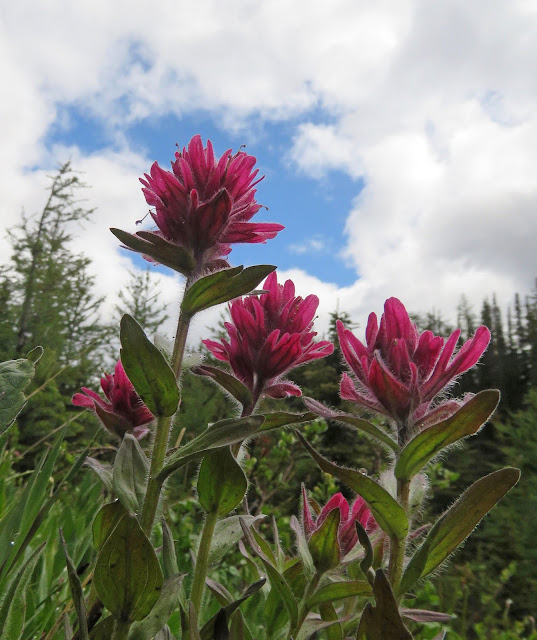 A mixture of glacier lilies & anemones as far as the eye could see! 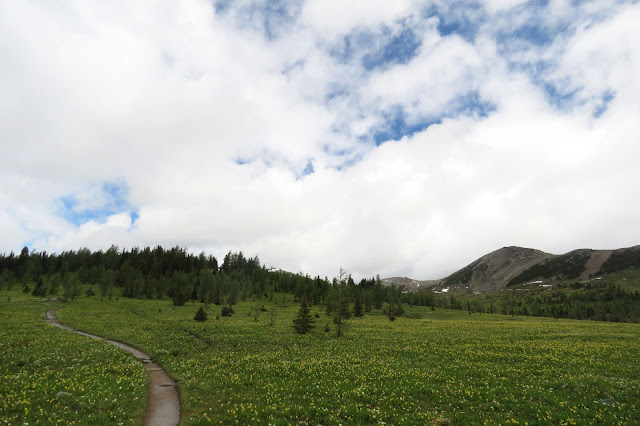 We made it to Healy Pass with thankfully a bit of blue. It lasted long enough for a quick refuel before capturing a few photos and getting on with getting down to Egypt & Pharaoh territory. You can see The Monarch and The Monarch Ramparts behind me. 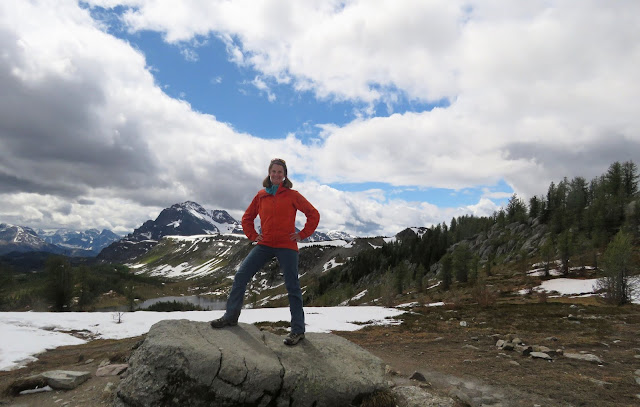 As we began the descent I noticed this sign which looked brand new. Well, it was new to me since my last visit up in the Healy Pass area. 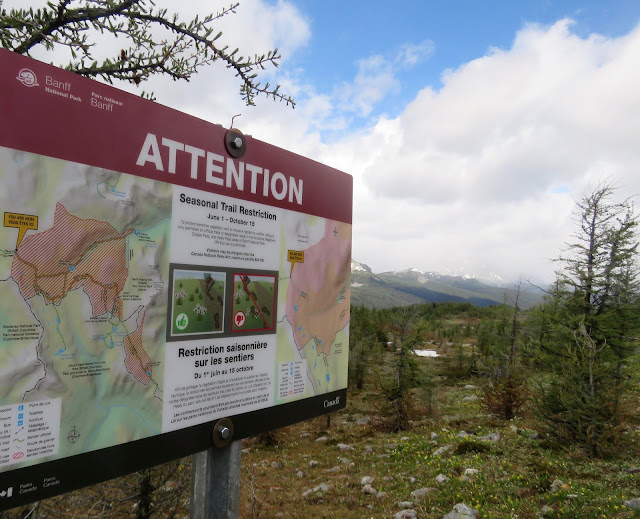 We are headed way off down into the valley in the middle below and surrounded by those peaks. 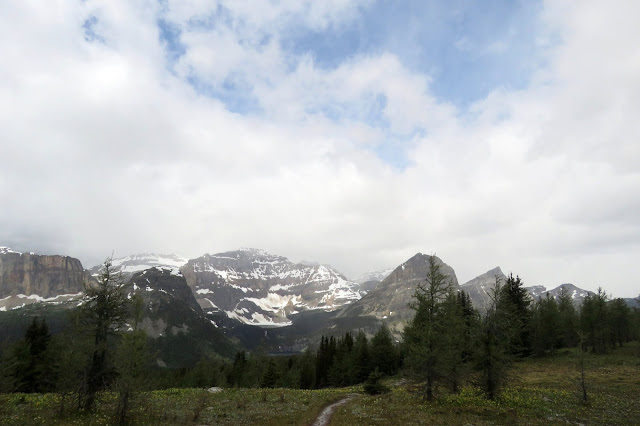 working our way down 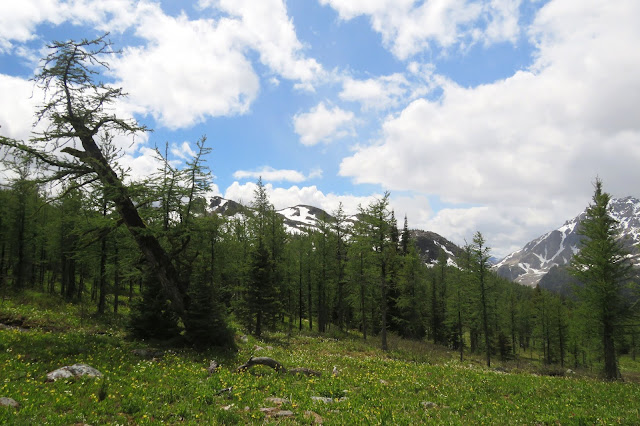 We reach the bottom and make a quick visit to the Warden Cabin to see no one is home yet. 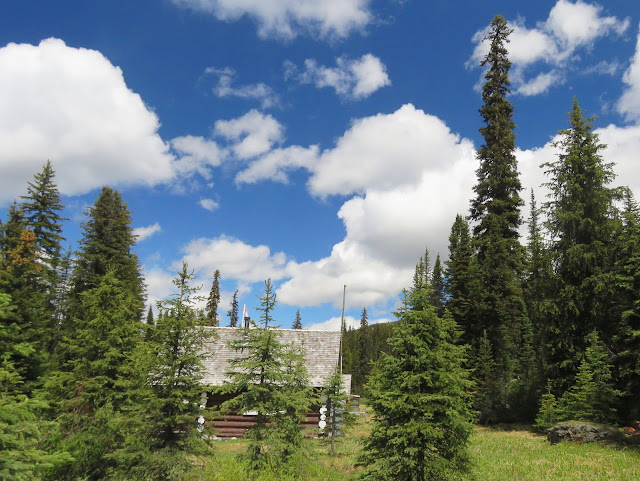 While we questioned off and on along the way would we make it to Egypt Lake, we now know for sure that we will. The bridge crosses Pharaoh Creek which is the water source for those camping at Egypt Lake and staying in Egypt Lake Shelter. Right behind me is Pharaoh Peaks. 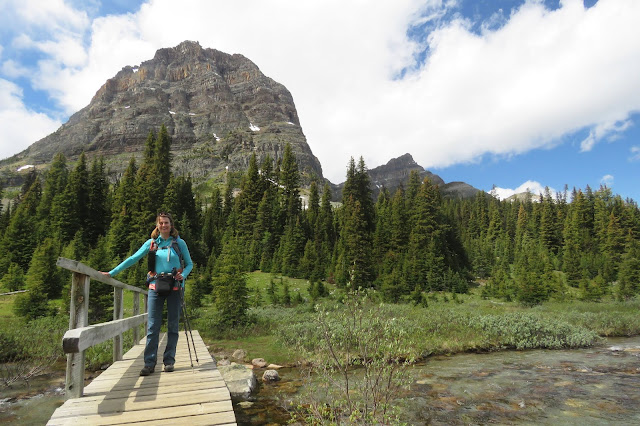 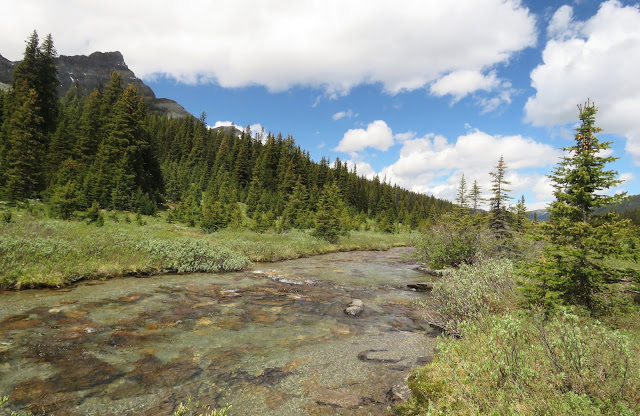 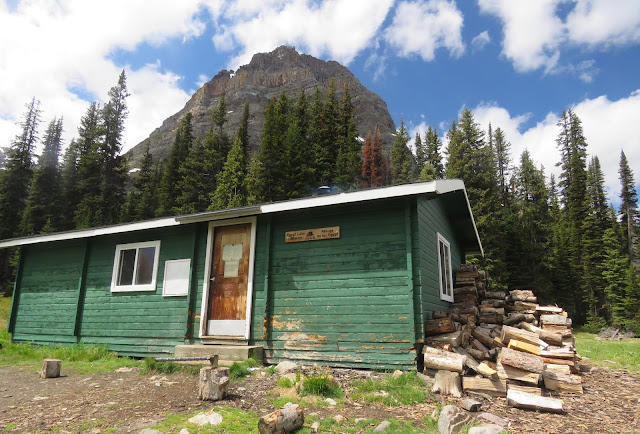 We arrived at Egypt Lake. Before doing anything I made sure to capture a destination shot while we still had some blue sky. With the history so far today, the blue would probably not last, and it didn't. We did get to have lunch but did not linger long. The showers started and turned to rain and then snow. 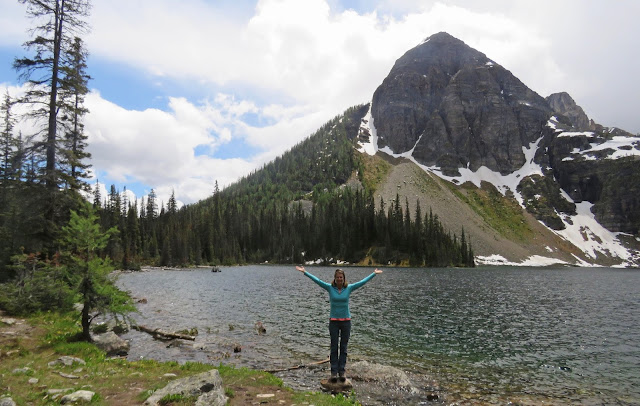 We made our way back to the shelter and went inside to brew some tea. Our intentions were to make tea while having lunch at Egypt Lake but the rain put a damper on that plan. It was nice to have tea inside and dry off. While doing so, the sky once again turned blue. 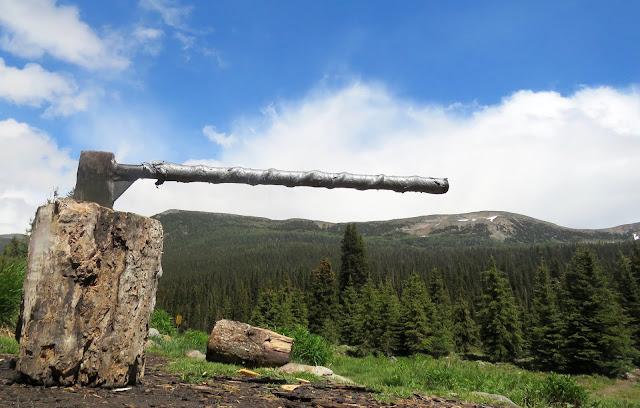 The axe was the heaviest I ever lifted. 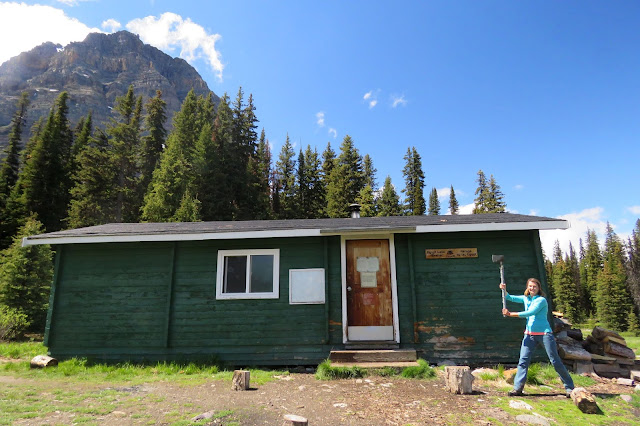 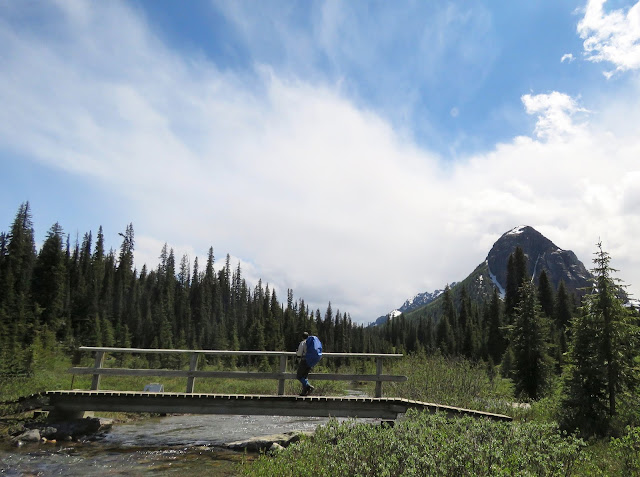 We made our way over to the Warden Cabin again before beginning the big ascent. The Cabin was still boarded up but two people were settled in on the front deck with their backpacks and boots off. We wondered was this where they planned to spend the night! 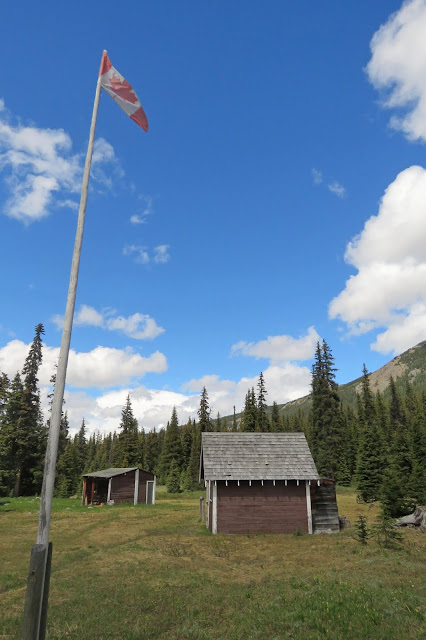 We were slow and methodical as we ascended! 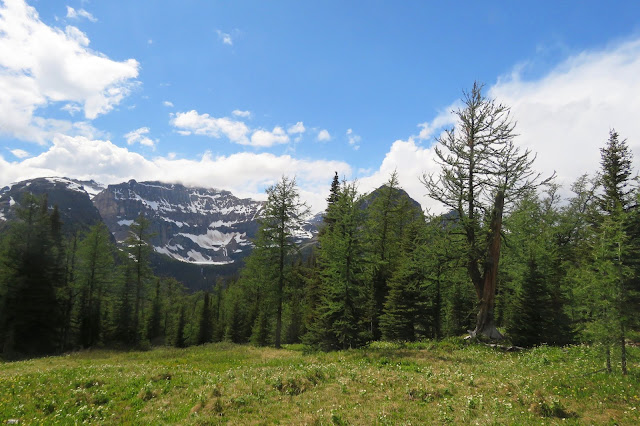 Again it rained and snowed and hailed and sleeted but we forged on to get the job done. When the sun came out, I got happy and silly but boy was I beat. 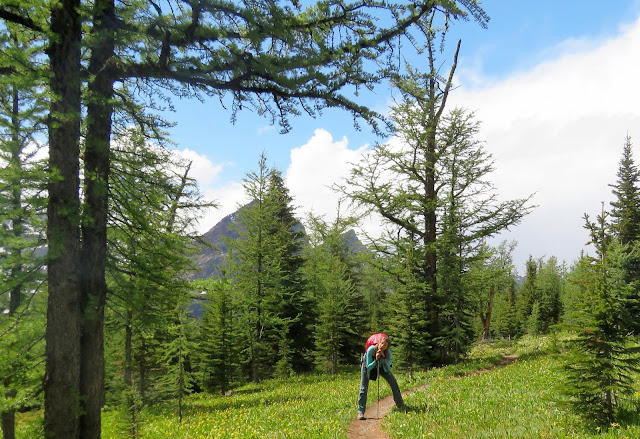 Once again there is The Monarch in the middle. With the wind settled and the sky blue again, we sat on rocks to devour some food to get us through the last eight kilometers. We had a great view of wildflowers and mountains. We acknowledged how pleased we were with accomplishing that tough climb and also how fortunate we were to have this experience today. 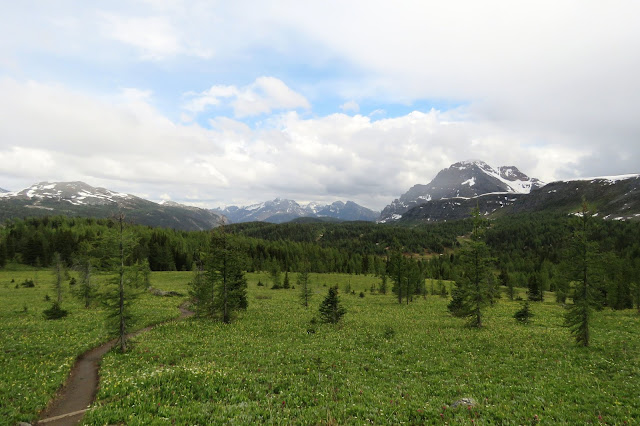 I savoured my last sandwich and this view. 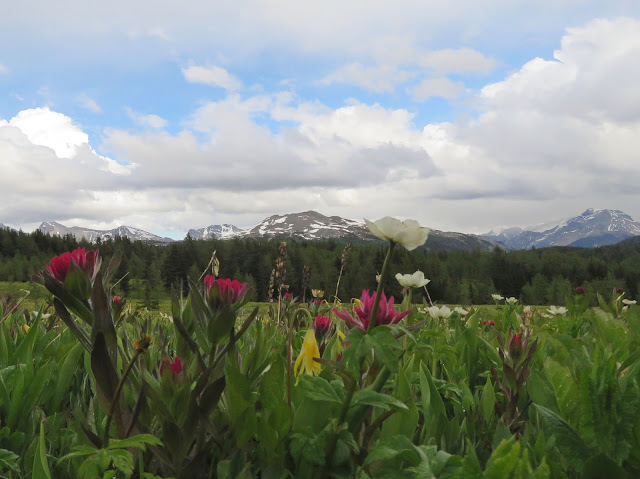 Now we just needed to get back into the forest and get on with completing the last hour and a half of hiking. It rained, it poured, it snowed just as we expected it probably would. I didn't care at this point. Ten and a half hours later we arrived back at the car. I was pleasantly depleted and joyful once I got my boots and socks off and got to sit on the comfy car seat. Thank you for sharing today with me and being in the same frame of mind with thinking "oh whatever with the weather" it truly doesn't matter! I don't think these are the words to use "she's sweet but a little bit psycho", but rather I believe "they are adventurous, spirited, strong and passionate" are better suited! 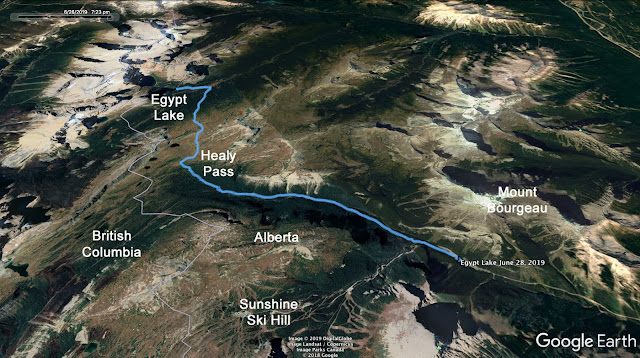 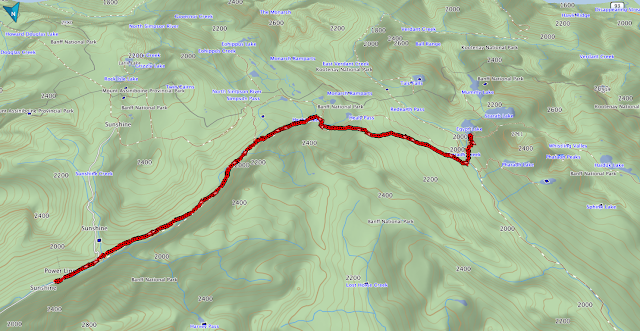