According to Google Earth's satellite photos of the western side of the North Blue Diamond Hills, a couple of new trails have cropped up. Today, eleven hikers explored one of those trails. In May of 2017, the satellite photos showed that the trail we hiked today only went to a certain point on the western ridge and without any extension of the trail around the overlook corner. Now, in April 2019, we proved that the trail leads all the way to the "peak" of the ridge then continues down from there as seen in the first photo of this entry. (We are probably a little late to the party because the trail appears that it has been there for a long while!)

We assumed it was a bike trail since the trail zigzags up the hills making the ascent and following descent gentle and gradual. However, today, a Sunday, we did not see any bikers.

Researching the route, I saw that the trail was not easily accessible by any known route in the Hills except for the dirt road that is gated at SR 159. One could argue that the hike could begin at that gate but the gate should not be blocked at any time. (See the last map below.)

Therefore, we started our hike at the Cowboy Trails Trailhead today to make our way across the desert to the "V" in the western ridge where we would pick up the worn trail. The hike would turn out to be a solid moderate hike as an out and back. Through the ranch gate, we took a sharp right and dropped into the wash next to the trailhead. A little further up, the Conglomerate Gardens (Kibbles 'n' Bits) Trail comes out of the wash on the left. Follow this trail shortly until it makes a sharp right turn around a boundary of piled dirt. After the turn, go straight finding a game trail junction that is barely discernible. Then, follow the burro tracks! They know where they are going!

This game trail drops into the wash. It does cross the wash but turning left into the wash works, too. We learned this coming back. So, just stay in the wash until there is a very small deep cut wash on the right side where we placed a cairn. I hope the cairn stays for a while!

This little wash crosses the dirt road and shallowly leads up to the worn trail junction in the ridge "V". Turn right onto this trail and you begin your zigzagging ascent.

First, the trail zigzags up a small hill, then it crosses over to an intermediate hill with more zigzags. Finally, the trail perches atop the long western ridge of the North Blue Diamond Hills. Along the way, the views are unique and wide of the Calico Hills, the Sandstone Bluffs and the north and east North Blue Diamond Hills. The ascent continued along interesting terrain traveling through a Moenkopi layer of limestone. The cliffs on the east side became steeper and there is a very safe but thrilling view over toward the dirt road and the very old mining scars leftover from back in the day. The higher we got, the more we could see the southern portion of the Sandstone Bluffs and Mt. Potosi.

It was a mixed moderate crowd today and we all had no problem with the moving pace of 2.1 mph. We moved along taking note of lizards and flowers along the trail.

We passed the "end" of the trail as indicated on my GPS and saw that the very well maintained trail continued to the peak overlook. We were very happy about that!

Arriving at the overlook appeared that we had arrived at a bottomless clifftop! When we sidled over to the edge, we saw that the "cliff" would have been easily down climbed into the remains of the Blue Diamond Gypsum Mine but that would be crossing a private property boundary as claimed by the Corner Boundary Marker placed on the cliff rocks. The Red Rock Canyon NCA ended here but still continued down the ridge in the southern direction. I was surprised to see a long trail appearing that led down toward the old Oliver Ranch off of SR 159. (Not seen on the May 2017 satellite photo.) We took our break here on the overlook ruminating on how we can use these trails for the future.

We enjoyed our stay then started down. I asked the women behind me what I should call the hike on this blog. "Gypsum Overlook" and "Gypsum Jump Off" were two suggestions. I gave it some thought and went with Gypsum Jump Overlook. Maybe the bikers who created the trail would like that!

Descending the trail, we noticed an old mining claim. Interesting that it is still there. Also, "something" zoomed across in front of me so fast that it was a mere blur. Thinking it might be a kangaroo rat, I followed the blur until it stopped.

Peeking out from behind a rock, we could see that it was a Great Basin Collared Lizard. These are larger than the common Side-blotched Lizards. It was an uncommon sight here at RRCNCA. We continued down the zigzags and dropped off the worn trail into the small wash, crossed the dirt road and continued into the larger wash where we placed a cairn. Finding the game trail out of the wash was not easy and we had to use the GPS but suffice it to say, this wash is the same wash that leads all the way to the trailhead. We always have a lot of fun doing new stuff! Great group today!
6.3 miles; 800 feet elevation gain; 3 hours; average moving speed 2.1 mph 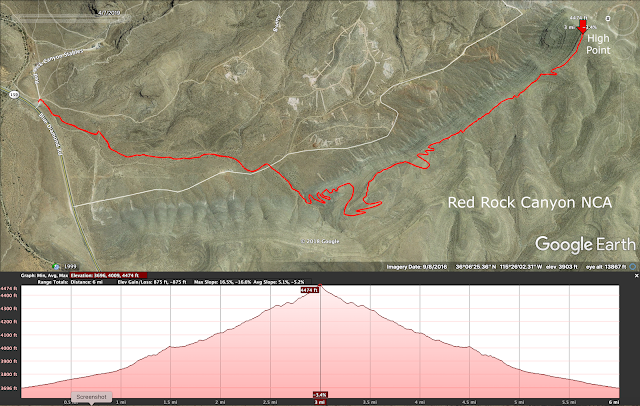 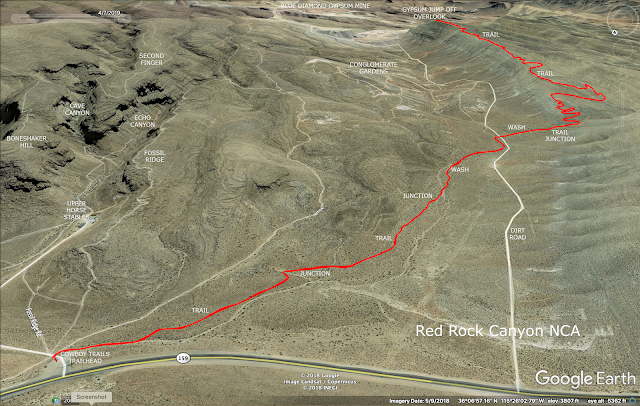 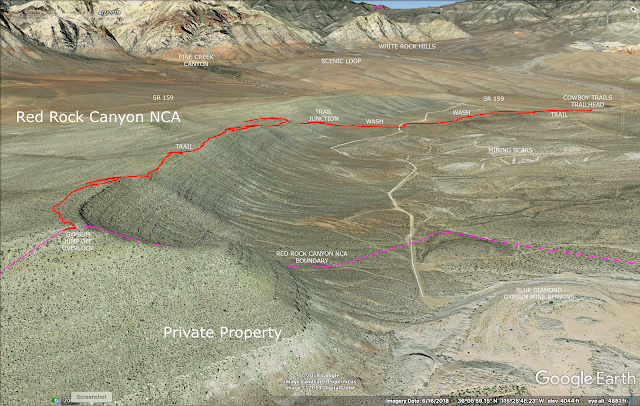