It's been quite an unusual year for precipitation here in the western United States. Las Vegas resides in the desert, however, we were not immune from record snow levels in the higher elevations of the Spring Mountains in 2019. Normally, snow recedes from the higher elevations by the end of May or beginning of June. Charleston Peak is usually safely climable by the end of June without snow ascent aids. This year, well, there is still a lot of snow on the trails but we keep hearing rumors that the South Loop ridge is looking very good. (Mind you, the North Loop ridge has all those snow-covered precipitous wash crossings.) However, getting to the ridge is still a bit of a hassle as eighteen club hikers found out today.

The eighteen hikers had varying conditioning from high moderately strenuous to high strenuous abilities. With that in mind, we set out from the beginning of the South Loop Trail with roughly two ambitions for the morning!

One group had the mindset of "Griffith Peak or bust!" (Well, to reason, that is.) The other said, "We'll just see how far we get before the snow stops us."

All of the eighteen hikers continued without significant stops to the South Loop's 1st Overlook. By the time the last hikers climbed in, the first hikers were ready to go. The terrain looked very promising and we were taking bets (this is Las Vegas) on just how far we would get. Our hopes were raised when we passed a couple of hikers that said there was "nothing bad before Charleston Peak!" Hmmm. Well, that's all relative. Anyway, we ran into a little bit of snow at the Echo Cliffs drainage but not enough to worry about. The crossing was clear. Then, the next obstacle was just before the 2nd Overlook in the form of a fallen tree.

The tree has a lot of rough bark on it and I came out of the crossing with a couple of scratches!

By then, the group was pretty spread out but we could each see at least one or two other hikers in front or behind because of the switchback scenario. By the time the back hikers reached the 3rd Overlook, the front hikers were long gone.

I was hanging out in the back of the line and saw the snow patches start to appear. One hiker in front of me had negotiated the huge snow mounds on the trail and made the switchback. I watched to see where he ended up then headed that way vertically to miss the snow. Feeling guilty for cutting the trail, I hiked up the trail to the next snow obstacle where a few other hikers had gathered. Hmm. The snow got worse from here and some of the hikers said that the front hikers resorted to climbing vertically through this whole area. I suggested that the ten hikers that were present and wanted to go no further in the snow, return to the 3rd Overlook and take our break.

While on break, we figured out who the eight hikers were who continued up to Griffith Peak. We were looking forward to their stories later.

Looking up at the South Loop ridge that led to Charleston Peak, we saw that there was very little snow to be seen. Perhaps, since the other side of the ridge, where the trail is, was south facing, the snow had vanished from the trail. This is the rumor.

Two hikers left the overlook early. One wished to be on his way. The other was on a search for fossils. We finished our break and started down at an even moderate pace. When crossing the Echo Cliffs drainage, we noticed there is a significant ice cave under the snow there. Be careful! Our one stop was at the 1st Overlook. When we got all the way down to that very first small drainage crossing in the corner, the wash was dry! Earlier in the morning, there had been a small amount of water flowing over that log! It happens just like that, folks! The only wildlife we saw all morning was a pair of wild horses hanging out at the Trailhead gate next to the road. FYI, love was in the air earlier this morning! Eleven months from now, a foal might appear!

When we returned to the trailhead parking, our group signed out and left while Rita, Kathy and I stayed to wait for the peak baggers. About 30 minutes later, they starting coming in.

One by one or two by two, the hikers that reached Griffith Peak hiked down into the trailhead to sign out. Smiles all over!

The stories started flowing! Well, there was this younger girl that was almost dancing down the trail in the snow. She found the trail to be in "great" condition. The men saw this as a challenge and up they went! In actuality, after the men reached the saddle, the climb on up to the peak was snow-free on the trail. It was just that section between the 3rd Overlook and the saddle that caused a problem. I'll wait! It was a lot of fun today as we plunged up the South Loop like it was a new adventure! Fun people! Fun time!
7 to 9 miles; 2200' to 3300' elevation gain; 4-5 hours 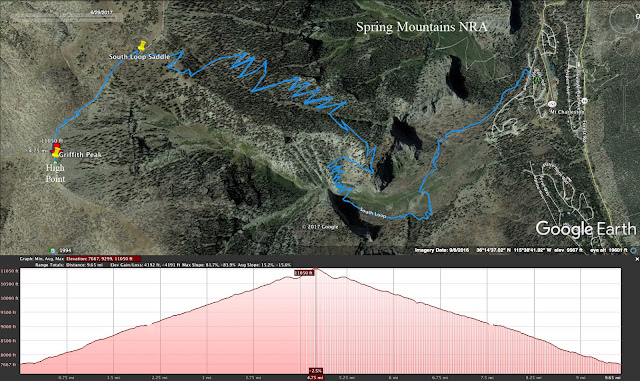 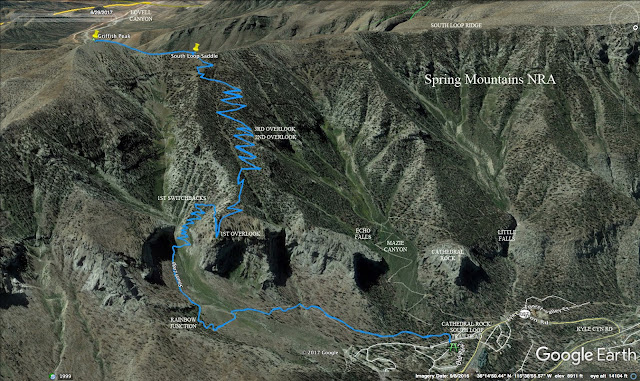 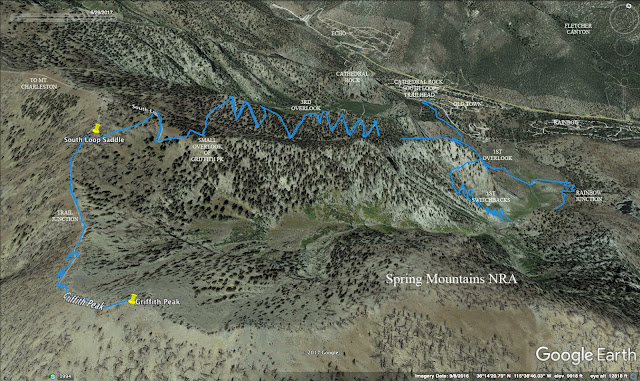