Going in to Elk Lake the hard way

Was it cheating to have the snowcat take our overnight gear and food in to Elk Lake, if we skied in the eleven miles? Having nothing to prove by skiing in burdened down with that stuff, we decided it wasn't. I've done the sled ski before, and if I didn't have to, I wasn't going to. Free of our food and clothing, we set off on the closed road with only day packs.

In summer, you can drive to this resort. Or you can hike near it on the PCT, and take a steep side trail down if you want a $5 shower. But in winter, your options are snowmobile, fat bike, or skis. Of course, there is the snowcat option. You can ride in with them if you want to pay.
We didn't, though, so we set out on our cross-country skis, accompanied by a horde of snowmobiles. Turns out, this is a popular snowmobile route, and it can be annoying to share the trail with them. But once we accepted that we were going to see them, we could settle down and enjoy the ski in. 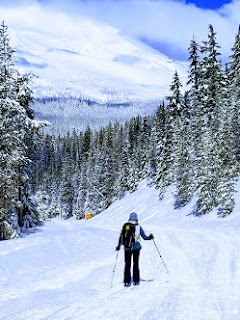 After a few hours we arrived at our cabin. There's a range of places to stay, from luxurious houses to camping cabins, with heat but no water. Ours was smothered in snow and the porch was boarded up with plywood. It appears that this part of Oregon is having a banner snow year. 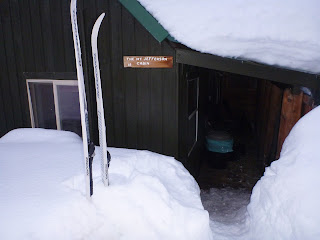 Once I was at Elk Lake, I didn't want to leave. Couldn't I just stay there all winter? Maybe I could just go get my laptop and an air card and work there. It was so peaceful. In fact, it sort of felt like a snow cave:

We spent the next day skiing around the lake and exploring the nearby campgrounds. A layover day was highly worth it.

Unfortunately, we couldn't stay in this paradise forever. It was time to go. We had come down 1500 feet in elevation and now had to climb out. The resort had ominously noted this, saying, "are you sure you want to ski out?" Yes, we were sure. 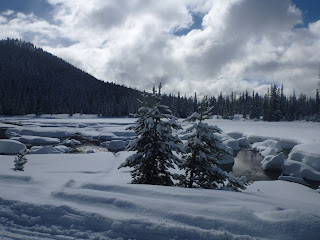 The ski out was much more brutal, with temperatures in the teens. My goal: to beat the snowcat. I succeeded. Then I faced a long drive home, fueled by the anxiety of a winter storm which closed the interstate after I passed through. But even with that, it was well worth the trip. I've been pretty much holed up at home most of the winter, and we've been pretty isolated, with the highways often closed. It was good to have a small escape.

The Beginner's Guide to Mount Wachusett: My Five Favorite Trails