Forever Botany Traverse- East Portal to Berthoud Pass (and back)!

I hope the conceiver of this route doesn't mind me giving it a name, it was her idea and I think she should get naming rights, but then again I don't think Forever Botany Traverse is a name she'd object to.Another early wake up and drive to meet Erin, fellow trail runner and Botanist. A lonely drive through Ned, continuing south to Rollinsville, and then west on East Portal Road from town. Drive the dirt road to the end, where you'll find Moffat Tunnel (check the link for some interesting history) and copious parking.While the trail is popular, I'd never been there and we didn't see another person until pretty high up, near the lakes. We started out at an easy jog, but dropped to a hike as the trail steepened up. I'd recently had a conversation with a few people about blazes from trails, since I found a trail close to home that was blazed with black paint. Someone said that black is often used when a trail is closed or decommissioned, to paint over the existing brighter color and render it less visible. On this trail, we could clearly see a blue blaze that looked like it had been painted over twice, with brown and grey, but was still visible. The trail is certainly well enough put in that blazes aren't necessary, perhaps they are from an old mining trail which became this trail, or an earlier era when the ethos was different. 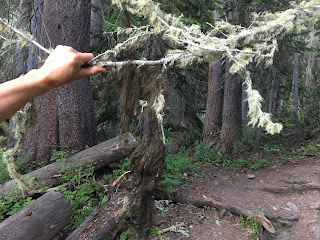 Erin found and wanted a photo of the horse hair like brown lichen pictured lower on this branch. I can't remember the name, perhaps she'll comment? 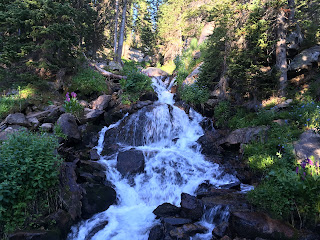 A small waterfall along the way. 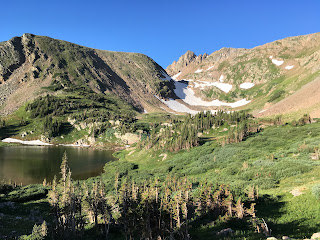 We reached a few bodies of water, here Rogers Pass Lake. We saw the first people we'd see over the course of the day here, all at a distance. This lake and the smaller unnamed bodies of water above it are the headwaters of South Boulder Creek. 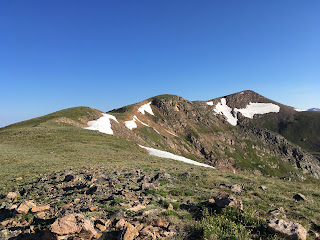 Heartbeat Peak from the top of Rogers Pass. While we intended to visit this summit, we decided to do so on the way back. 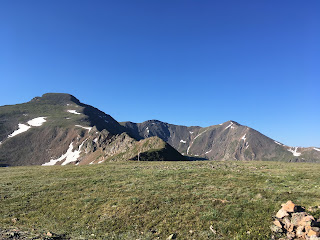 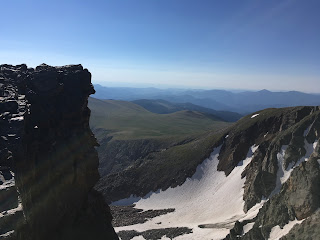 Down through a couloir to snow fields below.
We started up the climb to James, taking (at least on my part) small steps and breathing hard. There is a trail to the summit, though it is not always distinct.
One mutual concern we had was water, always a consideration with these ridge line traverses. We were able to find several seasonal trickles fed by snow melt in the area of James, but not much of anything beyond that. Would we find water at Berthoud Pass? 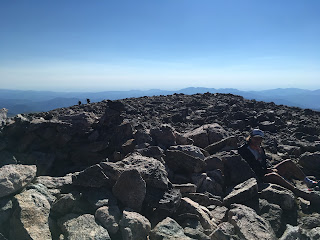 Erin on James Peak. The people in the background were part of a group of three through hiking the CDT. Bad ass! 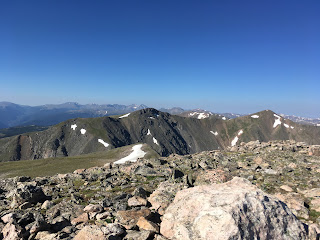 The views from the summit were great, and we could now see more of the terrain ahead. Was that our destination, impossibly far in the distance? 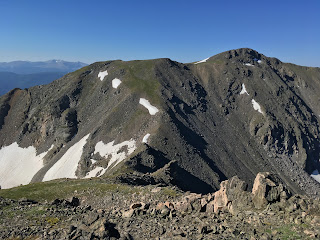 The next section provided some of the most interesting movement. From looking at the satellite images, there was a rocky area ahead that likely held some scrambling. It wasn't much of a deal really, easy stretches of maybe up to third class.
We also found a nice COLD source of snow fed water in this area, which we thought might be good to remember for the trip back. The views of Ice Lake below were pretty cool, as were the views back to James Peak as we started to gain elevation again. 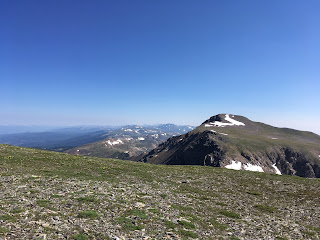 James and beyond!
The movement between Bancroft and Parry was pretty easy, save for the elevation, as the entire stretch is above 13k. 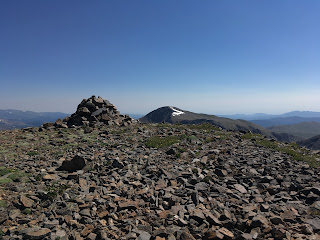 Parry, 13397 feet (highest in James Peak Wilderness, which meant it was all downhill from here. Not really.) and James, 13300 feet. 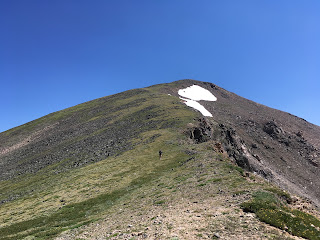 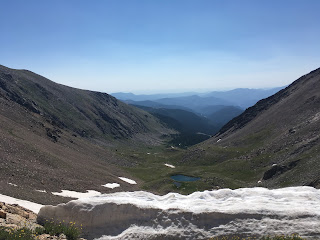 I rather enjoyed the views each pass brought to the east and west. Pretty spectacular drainages.
Next up was Mount Eva (named for Charles Parry's wife), Mount Flora (named, of course, for the plants of a particular region), and Colorado Mines Peak (you can probably guess that one!).
It seemed to take forever to get to the top of Eva, with multiple false summits. In reality, it was 13ish whole minutes from the saddle to the top. 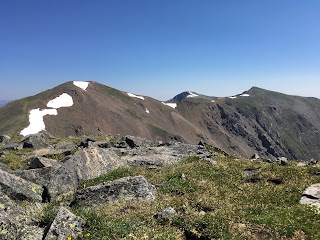 Mount Eva, 13130 feet, looking north. Find the interesting structures in the area (not pictured).
We headed to Mount Flora, the longest stretch above treeline without a summit for a bit. Of interest, the actual summit of Flora is the closed loop north of where it's marked on all the maps I've seen. This is visually higher, and you'll find a register there. The trail from Berthoud Pass also goes to the incorrect southern summit, so just keep in mind you'll have to break from it to get to the true top. 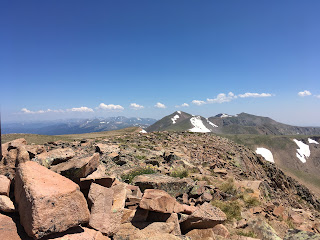 Mount Flora, 13146 feet, looking north. We were pretty close to the end. Almost halfway.
We passed several people on their way up on our way down and talked about how the positions would soon be reversed, and how we'd probably get those "Didn't we just see you?" questions.
We followed the trail down to another saddle, then picked up a trail around Colorado Mines. When it looked like we were below the summit, we cut directly to the top. 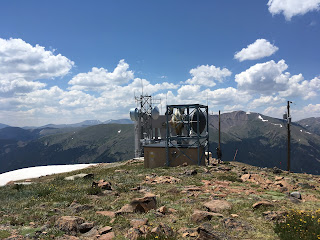 Unfortunately, none of the equipment there made fresh potato chips. We both agreed we could've destroyed a bag or more right about then.
With the parking visible, we descended directly down the hill to it, avoiding any brushy stuff easily, and eventually picking up a trail. Now, the next challenge of the day: water. I had just finished the last of my two liter hydration pack, and had a as of yet untouched half a liter in a soft bottle, but that wouldn't be enough to get us back, especially with the warmer afternoon temperatures.
We first headed to and checked out the building- no luck. There was what looked like a cistern behind, and we both had purification methods, but no way to access it and unknown if anything was in it. There were a few people in the parking lot who we could've asked, but in the name of exploration, we walked SW to the end of the parking lot. We'd both looked at the satellite images and this seemed like the most likely place. 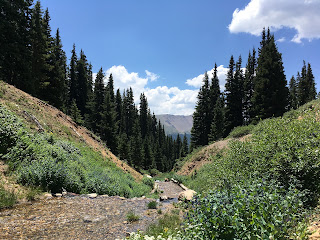 Paydirt! Erm, paywater! From what I can find, this is the Berthoud Pass Diversion ditch, which is owned by the cities of Northglenn and Golden. I'm not sure if it's a year round source or not, but we were glad it was flowing this day.
Now fully restocked for the trip back, we looked at the hill ahead. It was steep. We'd already been out for seven hours, and had spent an extended time above treeline. Thus, an easy pace was agreed upon. Step by step. We decided to skip Colorado Mines Peak on the way back.
Low and slow was the name of the game on the return, or at least it felt like it. I guess it always feels like you're going slower later in the day, but it looks like we essentially kept the same pace, going slower on the ups and faster on the downs.
We passed one group we'd seen on the way down, and the interaction made me smile. It was a couple with their maybe ten year old child, who said, "Didn't we see you going down?".
Erin was in front and answered, "Yes, but since we started from the other side we had to go back."
I stuck out my hand and got a low five from the child. "That'll keep me going the rest of the way," I said. And it did. I was just happy to see a family out there enjoying the day as we were. 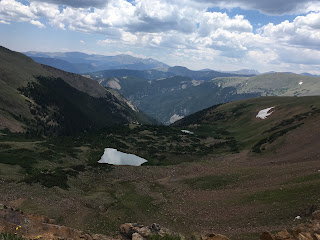 Another captivating drainage.
The weather was looking concerning in places. Lots of those big puffy clouds which can turn into something, but fortunately didn't though we did catch a few rain drops. If you attempt this, it is imperative to have a good weather forecast or to know you'll have to stick it out, because there really isn't any place you can bail and get back to the car without turning a long day into a really long day or possible overnight bivy somewhere.
I was moving slowly as we climbed back up Parry and it seemed like Erin was just going, going, going. I was struggling, but got to the summit aided by several short breaks (and she stopped to take photos of some of the local flora). I felt better from there on out, maybe it was just getting over that final highest hump. Or maybe she saw it and slowed down for me. 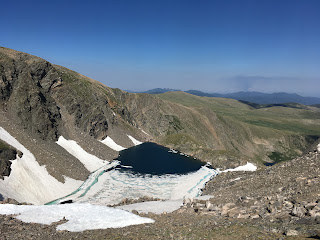 Over Ice Lake, note the smoke on the horizon. I checked the news when I got home, and it looks like this was from a vehicle fire.
We paused for a bit at the small Shangri La we found between Bancroft and James, and filled up on some icy cold water. It was a nice break at a nice place to be, if ever so briefly. 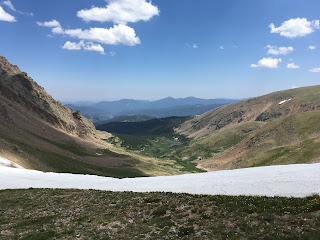 Down another drainage.
We got back to Rogers Pass and looked toward Heartbeat Peak. So close, yet so far away. It was already 6pm, and we decided to head back. 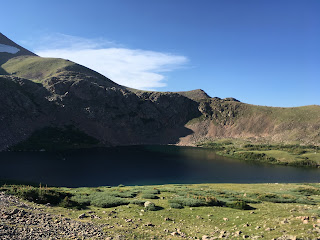 At Heart Lake. I spied a tent on the far side. What a place to wake up. 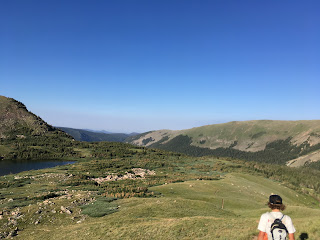