To start off my exploration of New Hampshire’s Historical Highway Markers, I thought it fitting to look into one that was both hiking and White Mountains related. We were up in Jackson this past weekend and I was able to locate the perfect marker for my first topic. It’s marker #0011, First Ascent of Mount Washington. 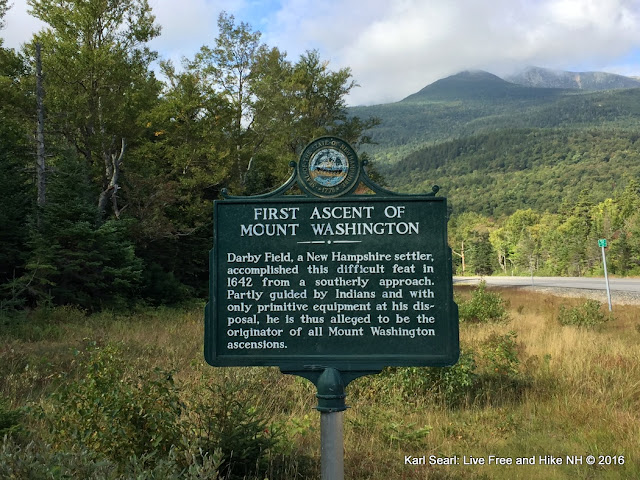 The marker is located roughly 0.5 miles north of the Pinkham Notch Visitor Center, on the northbound side of NH Route 16 (in the Pinkham Notch, just south of the Wildcat Ski Area entrance). The marker text reads on both sides the following:
"Darby Field, a New Hampshire settler, accomplished this difficult feat in 1642 from a southerly approach. Partly guided by Indians and with only primitive equipment at his disposal, he is thus alleged to be the originator of all Mount Washington ascensions."
It’s a pretty amazing accomplishment if you think about it. Just over 20 years earlier, the Pilgrims landed at Plymouth Rock in 1620 which puts into perspective how unpopulated the New England region was around that time. Darby Field, who was a settler in Durham, NH (at the time this land was Exeter, NH) was a known explorer and mountaineer back in Europe. The account of his ascent of Mount Washington was documented by Governor John Winthrop of Massachusetts Bay Colony in his journal which read:
"One Darby Field, an Irishman, living about Piscataquack, being accompanied with two Indians, went to the top of the white hill. He made his journey in 18 days. His relation at his return was, that it was about one hundred miles from Saco, that after 40 miles travel, he did, for the most part, ascend; and within 12 miles of the top was neither tree nor grass, but low savins [shrubs], which they went upon the top of sometimes, but a continual ascent upon rocks, on a ridge between two valleys filled with snow, out of which came two branches of Saco river, which met at the foot of the hill where was an Indian town of some 200 people. Some of them accompanied him within 8 miles of the top, but durst go no further, telling him that no Indian ever dared to go higher, and that he would die if he went. So they staid there till his return, and his two Indians took courage by his example and went with him. They went divers times through the thick clouds for a good space, and within 4 miles of the top, they had no clouds but very cold. By the way among the rocks, there were two ponds, one a blackish water, and the other reddish [the Lakes of the Clouds]. The top of all was plain about 60 feet square. On the north side was such a precipice [the Great Gulf], as they could scarcely discern to the bottom. They had neither cloud nor wind on the top, and moderate heat. All the country about him seemed a level, except here and there a hill rising above the rest, and far beneath them. He saw to the north, a great water which he judged to be 100 miles broad, but could see no land beyond it." [1] 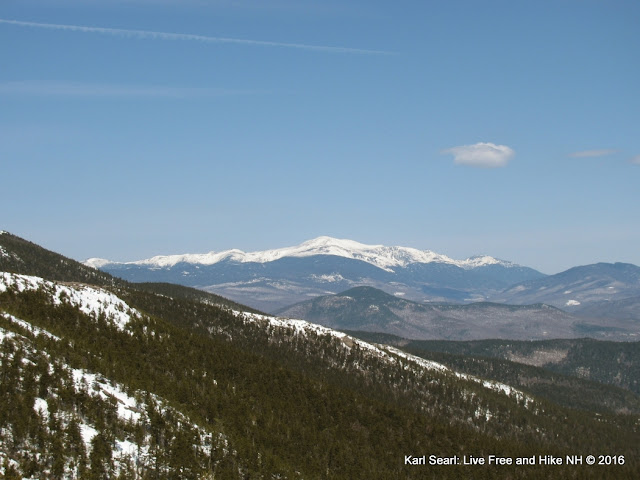 "The White Hill"…Mount Washington from South Moat
There was also another account of his travels in a letter by Thomas Gorges to his cousin, Sir Ferdinando Gorges, the Governor of the Province of Maine. It is believed this letter came after Governor John Winthrop’s journal entry and is said to be more accurate…but who can really substantiate that? The letter read (and note, I did fix some of the 17th century spelling to modern English due to spell check going crazy):
“…you desire a relation of the white hills. This much I certify of according as it was sent to me by him that discovered them whose name was Darby Field of Pascataqua who about a month since with some 3 or 4 Indians undertook the voyage, went first to Pigwackett, a place on the Saco river according to my draught now 23 leagues from Mr. Vines his house, hence he travailed some 80 miles as he sayeth & came to a mountain, went over it, & a 2d & a 3d, at length came to a ledge of rocks which he conceived to be 12 miles high, very steep, upon which he travailed going to a rock that was at the end of that which he judged 2 miles high, very steep, yet he adventured up, but one Indian accompaynge him, the most being fearful. At the top it was not above 20 foot square, where he sat with much fear some 5 hours time the clouds passing under him making a terrible noise against the mountains. Thence he discovered some 80 miles farther a very glorious white mountain & between 2 other great mountains as he judged some 100 miles…a mighty river bearing North & by East from him of which like or sea he could see no end. On this mountain, he met with terrible freezing weather and, as I took it, on the top of the ledge or rock & at the foot of them were 2 little ponds, 1 of a curious red color, the other black. The latter dyed his handkerchief very black, the former did not alter the colors. There were many rattle snakes but he received no harm. He intends as I hear from them a 2d voyage…about a fortnight hence. I intend with Mr. Vines & Mr. Jocelyn for Pascataqua & to take an ampler account. Our resolution hold for the voyage as yet about the end of August.” [2] 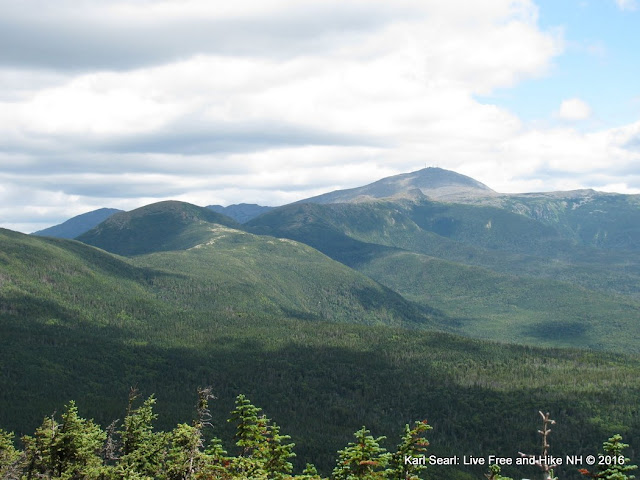 Mount Washington from the southern Presidentials
So, very cool stuff, right! Most feel these accounts allude to Darby Field ascending from the southeast, up over Boott Spur. Most also believe that one of the bodies of water (the red one) that is referenced is the well-known Lake of the Clouds. In Winthrop’s account, Darby Field witnessed a large body of water to the north that he could not see an end too, similar to a sea or ocean. Many people think this was simply a cloud bank playing tricks on him at the time.
This is all very interesting and the fact that someone was brave enough to explore this rugged terrain and ascend Mount Washington in the mid-1600 is notable enough for one of these historical markers, in my opinion. But I have to believe, like many do, that this was not the first ascent of the highest point east of the Mississippi and north of the Carolinas. It’s documented that many Native American tribes believed the mountain to be sacred and would not climb it for religious regions. However, it’s tough to think that this belief holds true through to the beginning of human beings in New England. At some point I’m sure another indigenous person or possibly an earlier explorer set their primitive hiking boot at the summit of the Rock Pile before Darby Field. I think the marker may be more accurate if it said “The First Documented Ascent of Mount Washington” or something to that degree.
By checking out my first marker, I accomplished what I set out to do. I learned something cool about my State, the mountains I love and our history and heritage. I hope you enjoyed this little history lesson as I’ll be posting more in upcoming months!
Facts about this New Hampshire Historical Highway Marker:

One thing I must mention is that there are many before me that have done a great job documenting this marker and the history behind it. They’ve been more thorough and are better writers. Please take a minute to check out their posts. Links are below.
Mike in New Hampshire: https://mikenh.wordpress.com/?s=first+ascentLive Free and Draw: https://livefreeanddraw.com/2012/10/07/darby-field/
ReferencesRef [1] – Wikipedia of Darby Field https://en.wikipedia.org/wiki/Darby_Field
Ref [2] – The White Mountains: Alps of New England: pg. 27-30 (Google Books)
https://books.google.com/books?id=xT1zt3O1kNUC&printsec=frontcover&dq=The+White+Mountains:+Alps+of+New+England&hl=en&sa=X&ved=0ahUKEwjy257zoJTPAhUIOiYKHYmGC6IQ6AEIHjAA#v=onepage&q=darby%20field&f=false