I know I keep talking about this, but we are buried! I've never seen so much snow in our little village. And it's not stopping. Even the dedicated skiers are starting to grumble, except for a couple who say they want to be able to ski through June. No, please no.
Things that make Februburied stick out from all the past Februarys:
I've never skied so many days in a winter! We have gone on trails that I would never ski in less snowy times. The dogs peer plaintively over the snow-blown paths. They are dwarfed by the mounds of snow.
Running has been tough. The trails can't get beaten down enough, so it's either the treadmill or the icy pavement. Neither seems like a good idea, so I just keep skiing.
We headed up the Hurricane Creek trail, where nobody had been. Usually, people are convinced they can drive there, and try it. They end up stuck, and walking to our house to get help. Nobody has even tried it this year, which left the trail for us. But spooked by potential avalanches, we didn't stay too long. 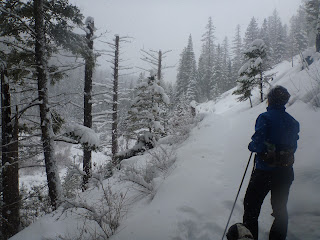 Alas, my faithful skinny skis are at the end of life. They have barely any scales left. They were free, so I can't argue too much with the need to go shopping. They lasted me ten years, and who knows how long they were used before that.
Also, I am out of firewood, a situation that has not happened ever. I had to do the Firewood Buy of Shame. It still seems like I should be burly enough to cut my own wood, but we estimated wrong this year.
One thing doesn't change. I am still a dork. Witness in the picture below. 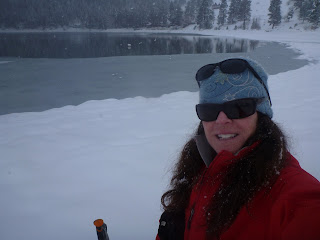 I didn't realize I had two pairs of sunglasses until I saw this picture. I ran into a friend and skied a ways with him and he SAID NOTHING. He probably wondered what that was all about.
Currently, we are at 125% of normal for our snowpack. I am worrying about my June PCT hike in the Sierra at this point, but it is too soon to tell for sure. And the snow keeps coming. Wherever you are, I hope you are enjoying the winter as much as I am.

Going in to Elk Lake the hard way

Skating on a (Possibly) Frozen Lake