Ever been walking around the Essex Estuaries?

The Essex Estuaries is a designated Special Area of Conservation (SAC), particularly due to its open coast mudflats and sandbanks.

The SAC stretches from Wivenhoe, down around the Essex coast round East and West Mersea, to Southend-on-Sea / Leigh-on-Sea, where there is also some great walking in the nearby country parks and on the islands.

From London Liverpool Street you can catch a train to:

And from Fenchurch Street you can catch a train to:

Here are some of the main highlights of the Essex Estuaries and Coast:

Reached from Leigh-on-Sea, a short walk takes you to Hadleigh Country Park and the distinctive castle (some say it’s haunted). 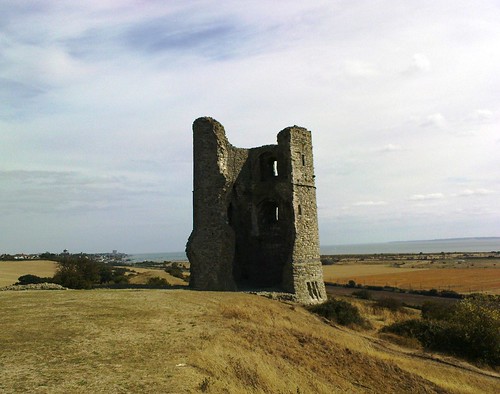 “We arrived at the Castle just as it was getting dark and found a spot below the fortress a bit out of the way. It almost goes without saying that this is a very atmospheric and cool place to have an overnight adventure. I personally also loved the view over the estuary, the refineries on Canvey Island and even the Kent coast.”– Jason Webber, Microadventure at Hadleigh Castle

Nearby Two Tree Island, a 640 acre nature reserve, can easily be visited on a walk to Hadleigh.

Read more about it:

From Burnham-on-Crouch, North Fambridge or South Woodham Ferrers you can explore the tidal River Crouch.

This is definitely one for you if you like peace and quiet; most walkers report seeing nobody on their visit. 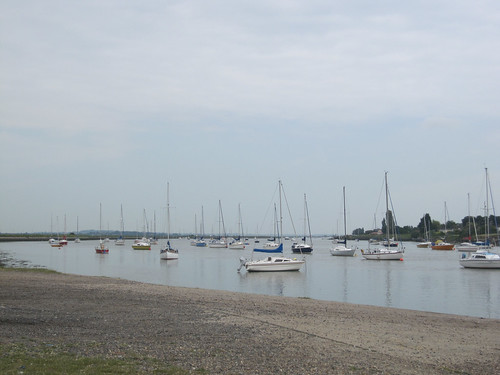 “To my left are marshes, covered in uniform green vegetation. They stretch almost as far as the eye can see. Beyond is a small sliver of shining sea and the distant glimpse of an occasional big cargo ship. To my right is a grassy track running parallel to the sea bank, then a watery culvert and then farmland – flat and featureless. I see nobody.”
– Ruth’s Coastal Walk: Tillingham Marshes to Burnham on Crouch

“We labour up the lower and upper slopes of The Cliff and from the crest, looking west, Essex stretches flatly in the direction from which we have travelled. We can see perhaps – who knows – as far as Billericay? Even Warley? To the south, the glamorous skyline of the Southend Megapolis exudes all manner of promise.”
– The Essex Coast: North Fambridge to Burnham on Crouch

Walks on the River Crouch: 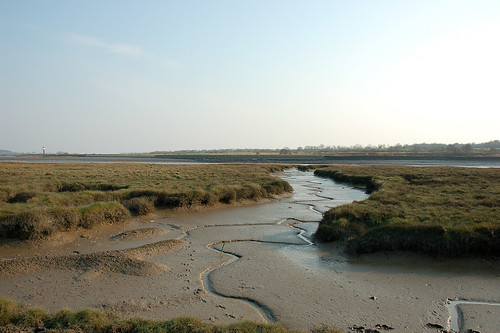 “The flooding area of the river Colne” (CC BY 2.0) by Steffen Weiss

“The Colne Valley is the Stour’s quieter, less illustrious cousin. You won’t find coach parties here unless the satnav’s faulty. You will find dreamy villages of half-timbered tearooms and tottering 18th-century cottages painted pink, baby blue and cream, as if Barbara Cartland’s been let loose with the Dulux.”
– Guardian Let’s Move to the Colne 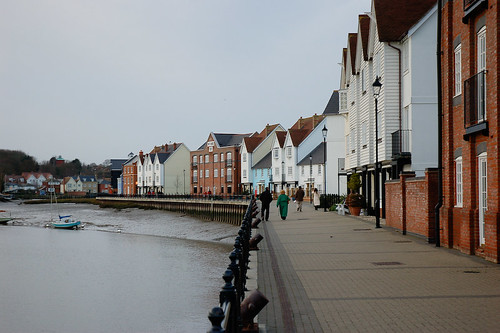 “The waterfront in Wivenhoe” (CC BY 2.0) by Steffen Weiss

A walk around it is an intriguing mix of coastal beauty, sea defences, and heavy industry. 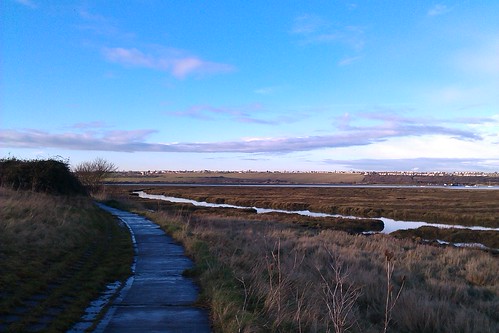 “…the best thing of all is always the quality of light. The Thames estuary is a very special place, especially in the afternoon and evening; I don’t have words to describe it, but it never disappoints.”
– Peter Cameron: A Walk around Canvey Island

“Just past the Yacht Club on the eastern end of Canvey and you can walk out onto the salt marsh and follow a ‘footpath’ to Canvey Point, the most easterly point… Not knowing the tide tables, I turned back at the warning barrier. There is a fine view east to Southend Pier and the river looks huge as it meets the North Sea. It was also the first point on my journey that smelt like the seaside, a distinctly salty tang in the air.”
– More Ambler than Rambler: Walking the Essex Coast: Canvey Island

The Broomway is a notorious tidal path along the Maplin sands to Foulness and is one of the most dangerous paths in Britain.

The path used to be marked with large posts (‘brooms’) but now can only be followed by a compass reading.

As the path disappears under the tide, which rushes in extremely fast, the route is incredibly dangerous and it had caught out many a walker with tragic consequences. 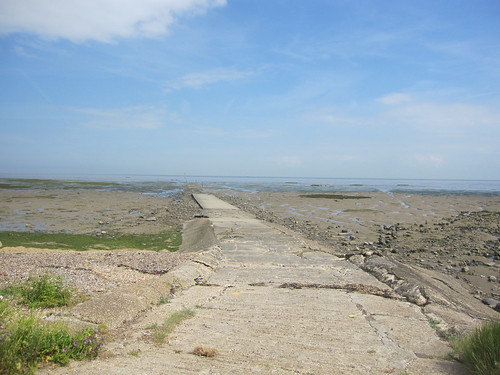 “…the experience of the walk was quite like nothing else I have experienced in this country. A huge sky, the vastness and unchanging nature of the environment around us, the trudge through the wet sand which could get somewhat hard going, as well as the sense that this was slightly on the edge, and the sad knowledge that many had perished out here.”
– Ramblers, Paul Carter: The most perilous path

“Yes, it was undoubtedly dangerous, and parts of it more dangerous than others, full of unexploded bombs and forbidding command towers. The shifting sea and the land bore little correlation to one another. The striking thing though was its unearthly beauty, particularly later in the day when the tide went fully out. The sky and sea mirrored one another, and the people walking were also mirrored. When we first looked over the rise, people were exercising their dogs on the shimmering surface, and it seemed as though they were walking on water.”
– Helen Callaghan: The most dangerous road in Britain 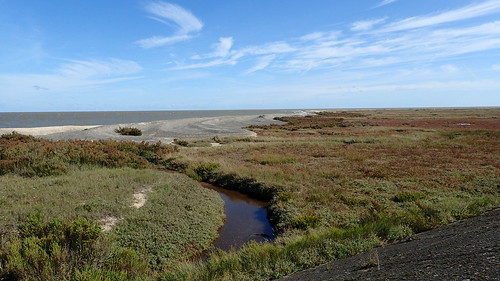 More resources for walking in Essex:

Walking with the ancients