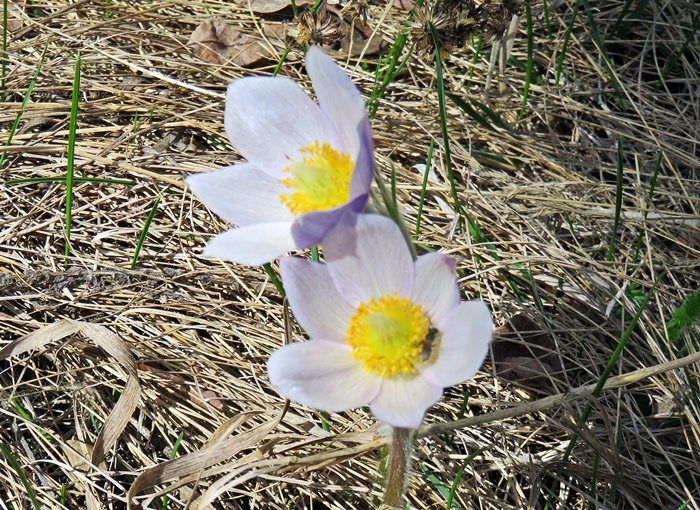 Edworthy Park is located in central SW Calgary. For this excellent inner-city hike access can be achieved by vehicle via Sarcee Trail, then east on Bow Trail, to well-signed turns for Edworthy Park and north on 45th Street noting the speed-reduced zone past Wildwood School.

A left turn onto Spruce Drive heads west past cell phone towers at Woodcliff United Church to the right turn onto narrow, twisting road descending slowly and carefully past hikers and cyclists to a sweeping left turn near the bottom for angled parking on the approach to a restricted-access, private dwelling adjacent to the expansive Edworthy Park picnic and playground area.

Access can also be achieved by parking on the north side of the Bow River near the bottom of Shaganappi Trail and walking south across the Harry Boothman Bridge (Edworthy Bridge) over the Bow River near Angel's Cappuccino and Ice Cream into and through Edworthy Park, past the railway tracks on the south side and through the picnic area/playground to the trail-head at the southwest corner.

From the angled parking area, a short walk to the end of the road reveals a cul-de-sac with well-signed, gated and restricted access road continuing to a private property adjacent to an informal, public, gravel trail heading uphill near a tiny stream.

The well-trodden trail gains modest elevation over a short, wooden platform bridge where a mirror pond subdues the progress of more aggressive drainage with pooling water beneath a large, mysterious and colorful drum laying on its side.

Two trail junctions offer uphill access to the dog walking park near the top of this Broadcast Hill slope following a robust and extended ascent while the lateral trail through forest proceeds west above an older and private dwelling below.

The main structure appears to be an old heritage dwelling with well-weathered, wooden roofing shingles whose presence will soon be hidden by new spring foliage on dense surrounding forest.

A short trail branch to the right provides a viewpoint with a memorial bench overseeing the heritage dwelling below as well as long views across the swelling, blue-green Bow River to the colorful Alberta Children's Hospital and beyond to the Calgary Downtown skyline. 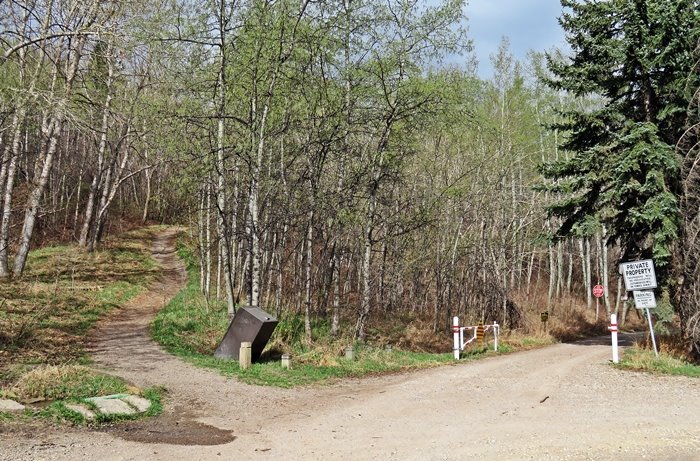 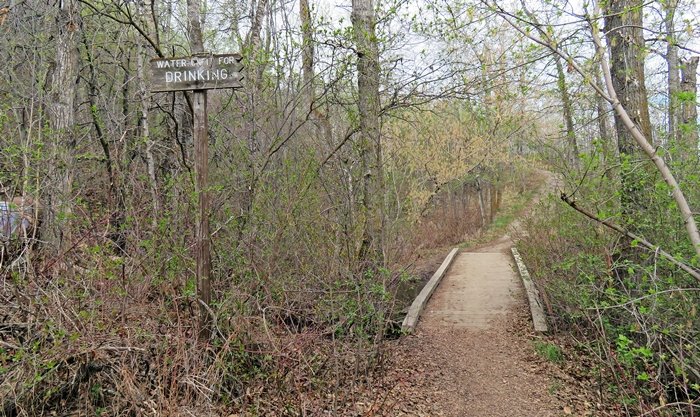 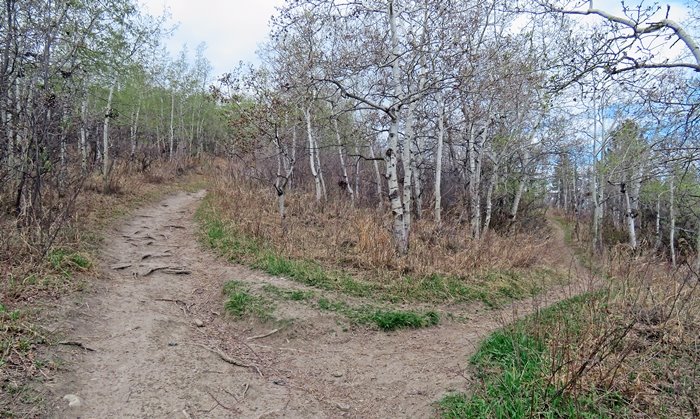 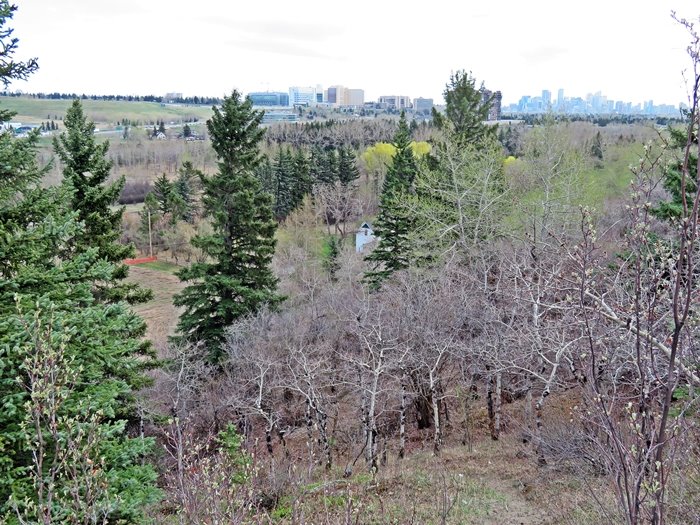 Continuing west, the hike navigates a large patch of, soon to be gone, winter ice and introduces a bit of off-trail adventure. As this mildly undulating trail section descends gently beneath power lines towards the railroad tracks and Bow River level, a triangular intersection features

2) a trail returning east along the railway tracks and 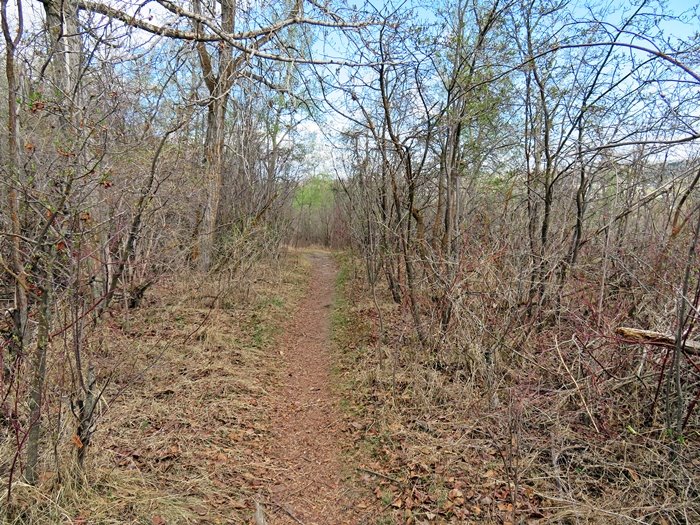 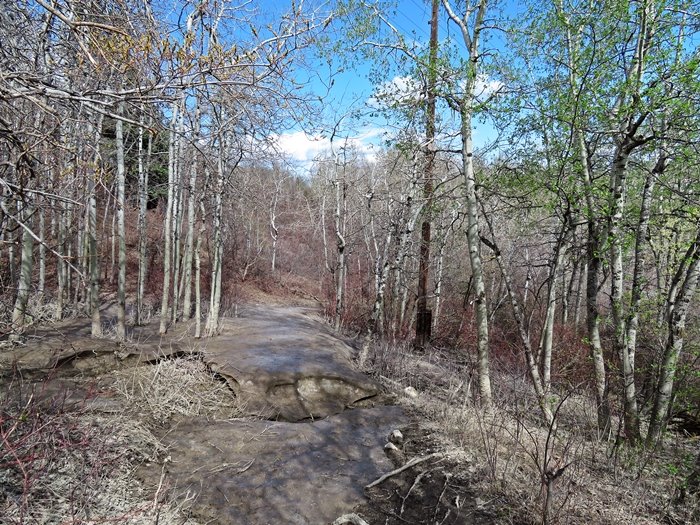 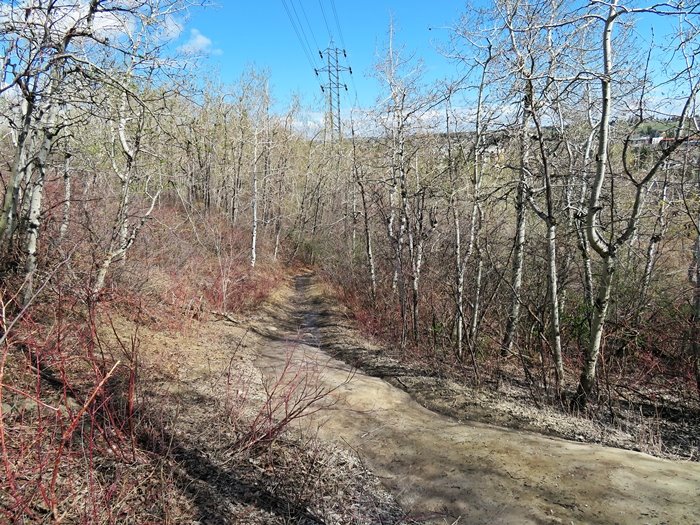 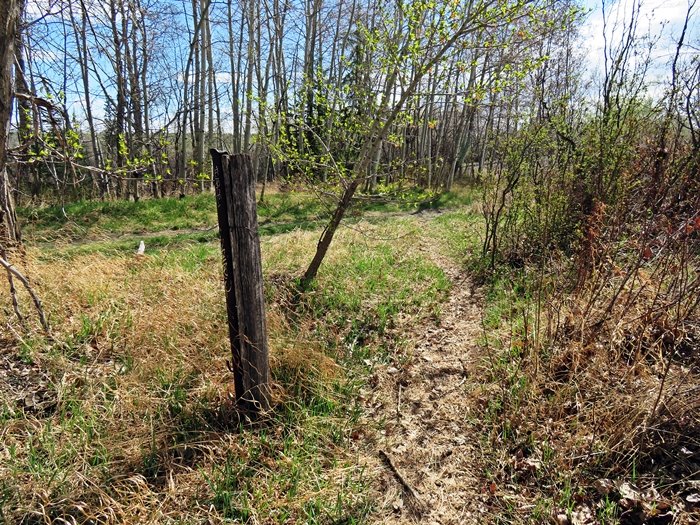 Occasional patches of open landscaped terrain on the left reveal large, isolated private dwellings perched above and surrounded by forest on these lower slopes of Broadcast Hill. 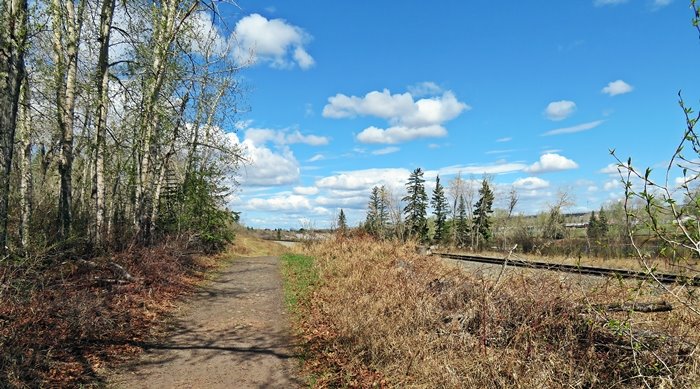 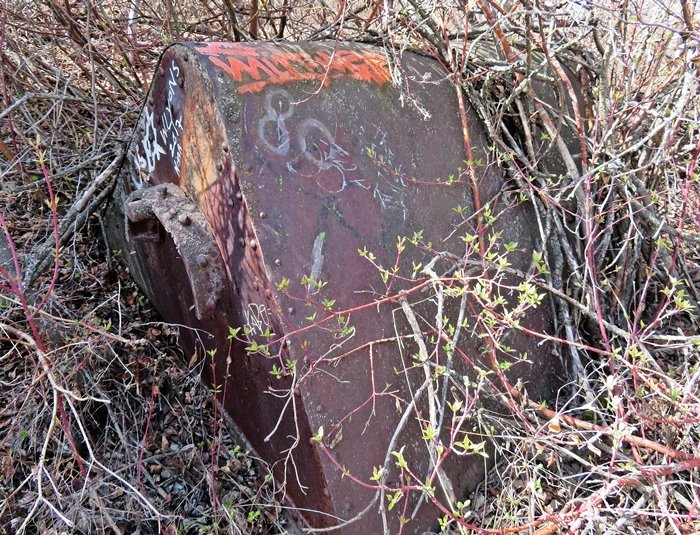 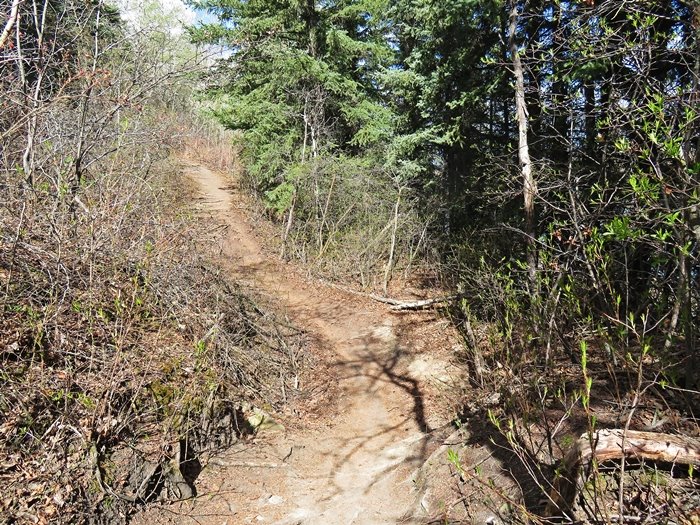 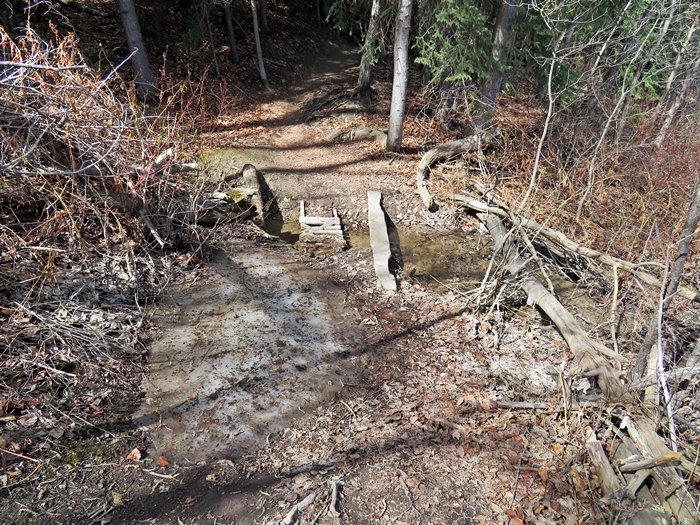 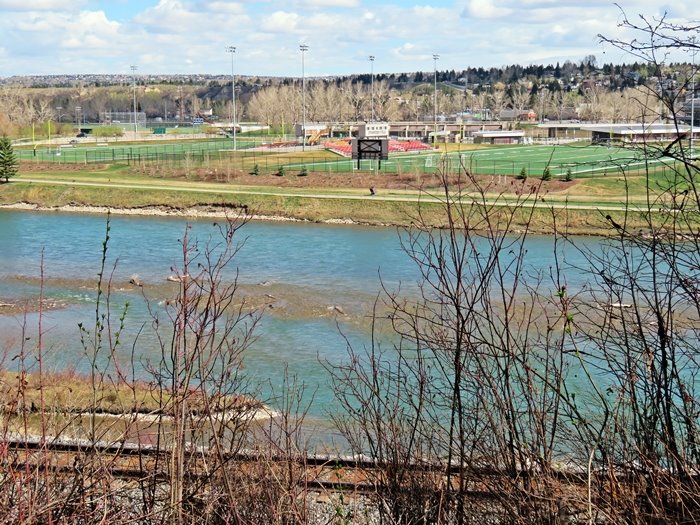 Following an excellent forest section featuring a stand of Douglas Fir, the trail opens to grassland beside an old post fence with remnants of historic telegraph cables still clinging to intact glass insulators from more comfortable, and less frantic, eras past.

Dirt trail descends gracefully to bypass a larger drainage for a short walk, on comfortable margin, to adjacent rail lines before a short return ascent to trail along fence line beneath telegraph line continues west above the railroad tracks.

An explosion of subtle lavender crocus poke through tall wheat-colored grassland. Sweeping vistas across grassland and over the Bow River reveal recreational facilities and the popular dog park south from the river-adjacent picnic area.

Shouldice Aquatic Centre resides nearthe sharp bend in the Bow River whichhosts the TransCanada Highway traffic bridge over the Bow River and the historic John Hextall Bridge beyond in Montgomery near the demarcation line between the communities of Montgomery and Bowness.

The continuing trail stretches straight towards the small community of Bowdale, encased by the sweeping exit from Sarcee Trail to the TransCanada Highway as the roar and rumble of a passing freight train interrupts the serenity and shakes surrounding ground. 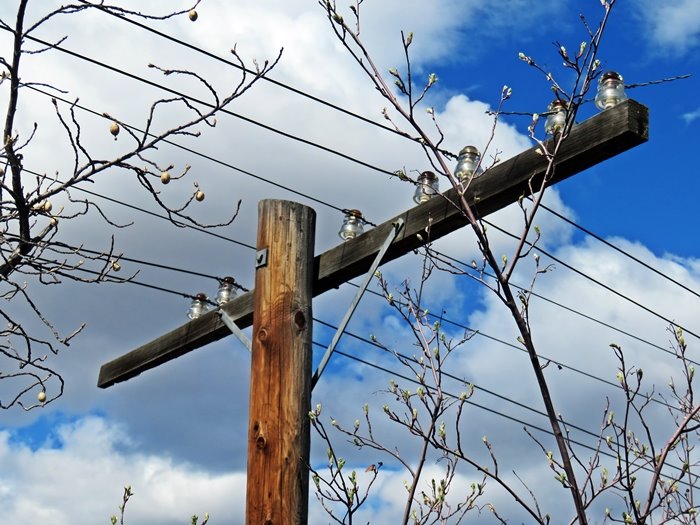 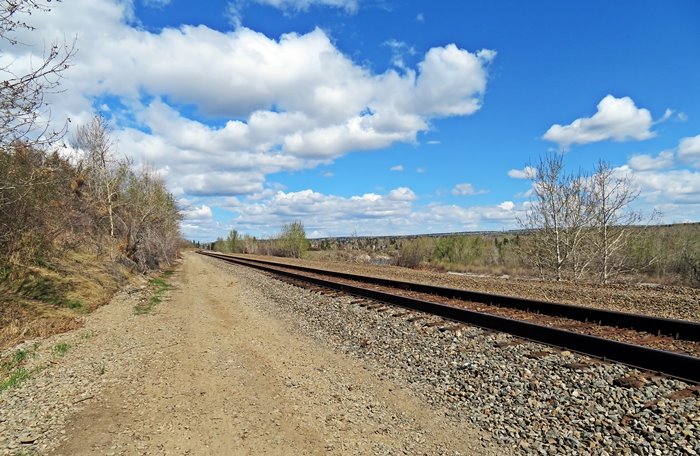 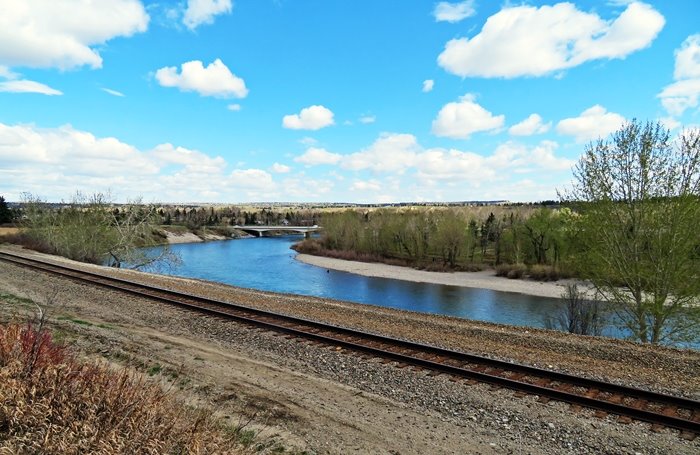 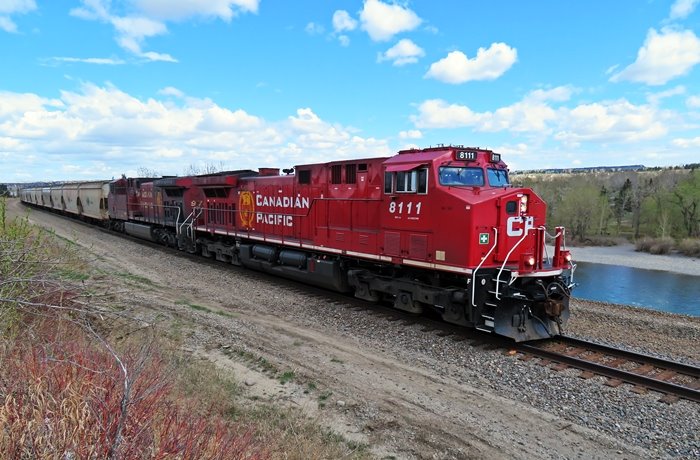 On the far side of the river, secluded parkland compressed between Shouldice Athletic Park and the beautiful Bow River hosts the daily dog walkers entertaining their partners with sticks thrown into the river for immediate and enthusiastic retrieval.

Although continuing informal trail complex provides the opportunity to walk the short distance home, the car remaining at Edworthy Park invites a return on trail initially taken predominantly through field and forest above the railway line. 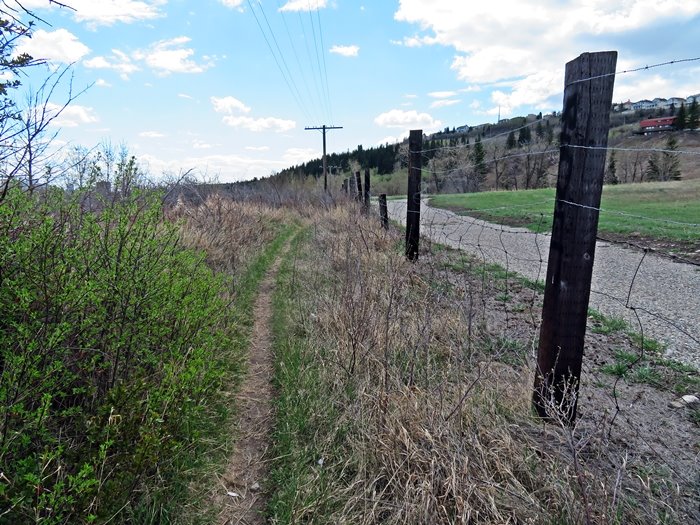 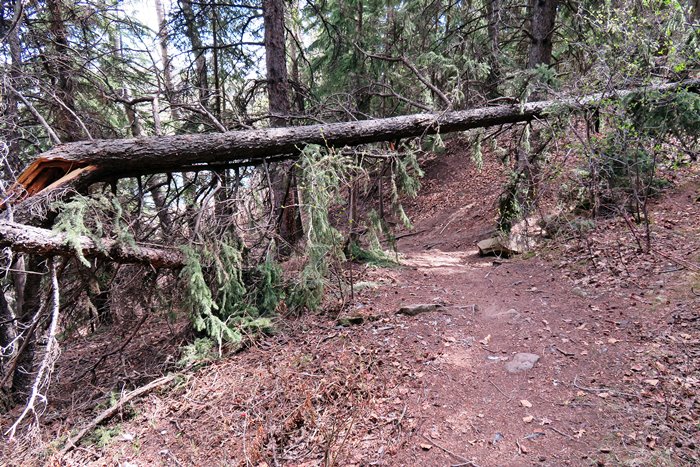 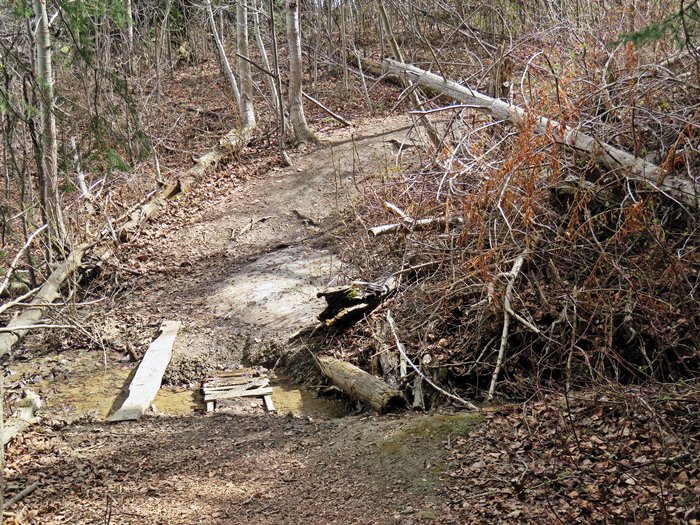 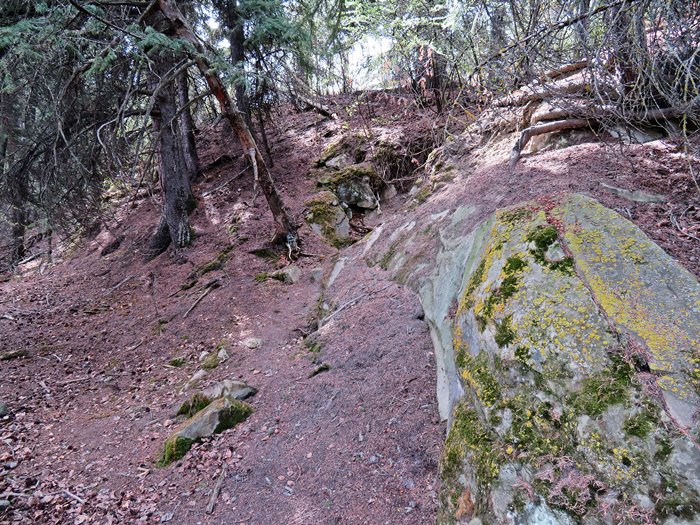 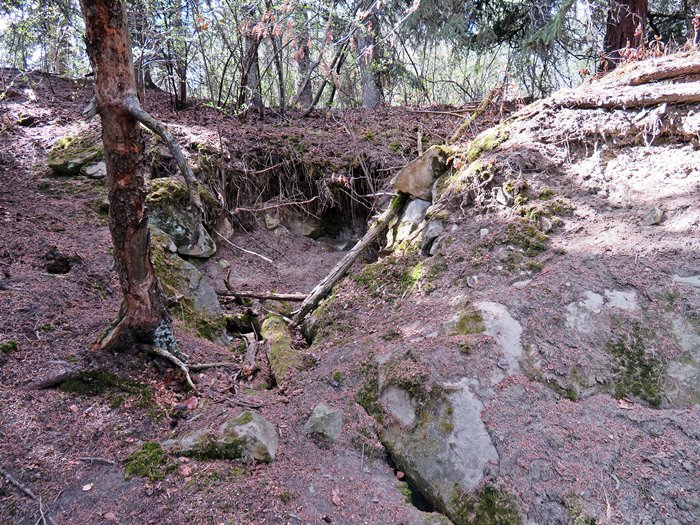 Back at the triangular intersection, the opportunity presents itself to become more familiar with the Brickburn historical presence. A historical marker tells the story. What began as a quarry and modest brick plant became the Calgary Presssed Brick and Sandstone Company which serviced burgeoning city development between 1905 and 1931.

Calgary's original City Hall used sandstone blocks from this quarry. Many Calgary brick buildings constructed from the plant's product include the Mewata Armory.

At it's height of activity, the original facility was churning out 80,000 bricks per day and occupied nearly 100 people. The complex at this location hosted dormitories, a small school, a post office, and a small church. Much of the brick was shipped by rail to other cities. Some of these bricks are at the University of Alberta in Edmonton, Alberta.

Touring the flat terrain between stands of trees reveals little evidence of prior occupation beyond the occasional depression in the ground which may or not indicate previous industrial activity.

A mound of brick debris at the west end, behind the corner signage, has largely grown over or has been consumed by nature and subsequent development over time. 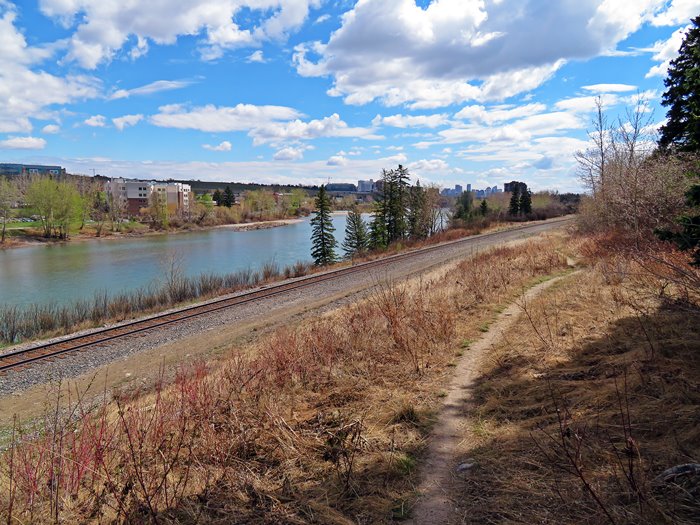 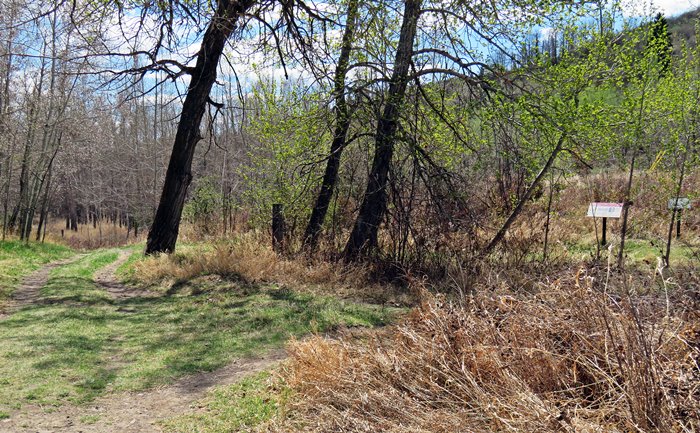 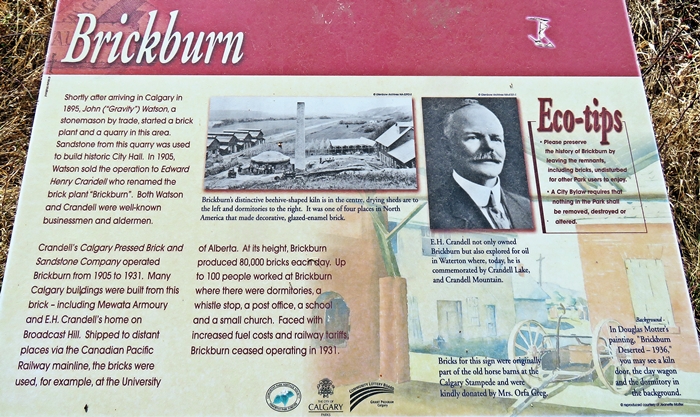 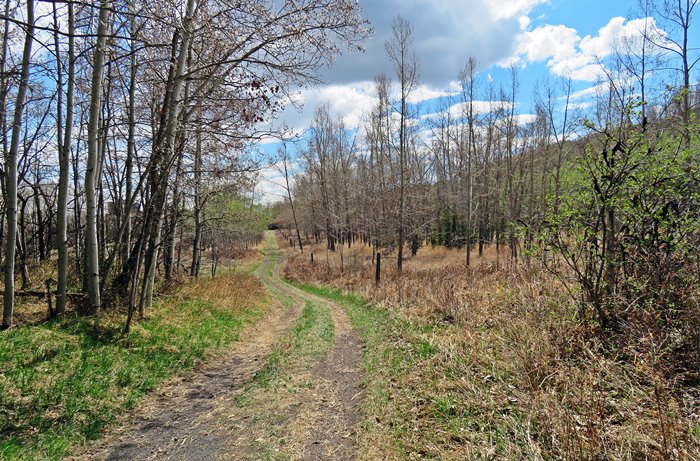 Return to Edworthy Park is achieved via old and heavily traveled road between the Brickburn archival marker and the railway tracks.

Passing private land adjacent to the well treed, private dwelling is protected by high chain link fence, shrubbery and forest augmented by many 'No Trespassing' signs justifiably pleading for privacy from surrounding public land and traffic.

A loop around the end of the chain link fence adjacent to the railroad line enters the well-appointed playground and group picnic area for easy return to angle parking near the trail-head.

There is huge hiking potential within Calgary and surrounding communities for physical conditioning opportunity and gear acclimatization prior to tackling trail in the mountains and gaining elevation as the snow line recedes. 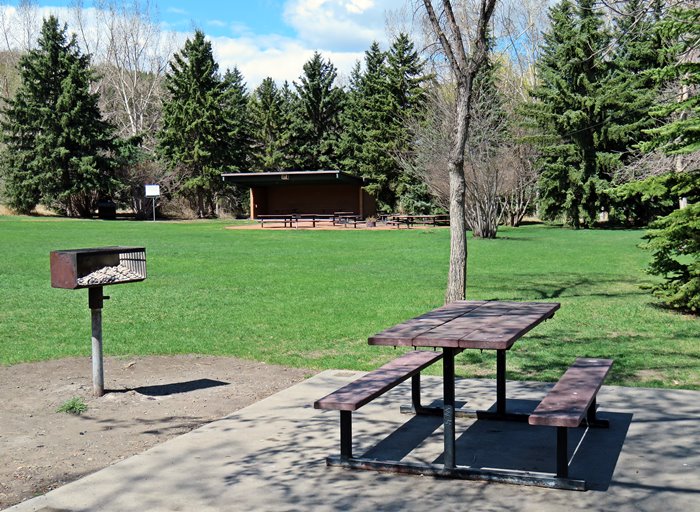 The nearby Douglas Fir Trail, a short distance east in Edworthy Park, which was heavily damaged by water runoff and closed for safety and repair, has now reopened and is another excellent inner-city hiking alternative featuring trees marginally older than I am.

Photographs for this Calgary inner-city hike were captured on informal trail between Edworthy Park and Bowdale Crescent, along the railway line and the Bow River on Tuesday, May 8, 2018 following a lengthy and challenging 2017/2018 winter season.