We took a late Labor Day holiday this past weekend and headed up to hike a 4,000 footer on Friday. The one we chose was Cannon Mountain for the well-known 360 degree views from the observation tower. We decided to ascend Cannon via the Hi-Cannon Trail due to its reasonable length since we got a late start. 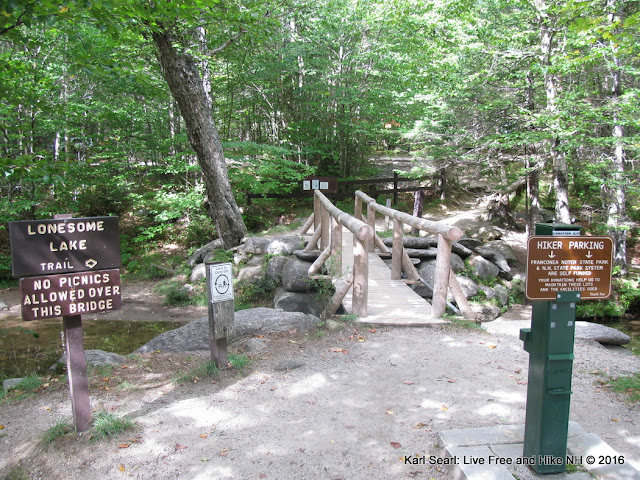 At Lafayette Campground, beginning of the Lonesome Lake Trail
Our hike started at Lafayette Campground, where the Lonesome Lake Trail begins. The parking area can be reached on the southbound side of the Franconia Notch Parkway (if you’re northbound, you need to reverse direction at the Tramway exit). We first worked our way through the campsites to the true trailhead of the Lonesome Lake Trail. The trail ascended gently and moved smoothly over the terrain. There was one part of the trail that was flooded due to some drainage issues. There was a culvert pipe under the trail at this point so my guess is it was clogged in some way. 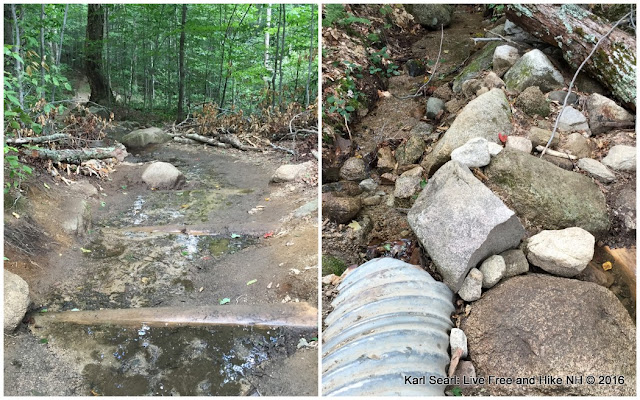 Lonesome Lake Trail flooded due to a culvert issue 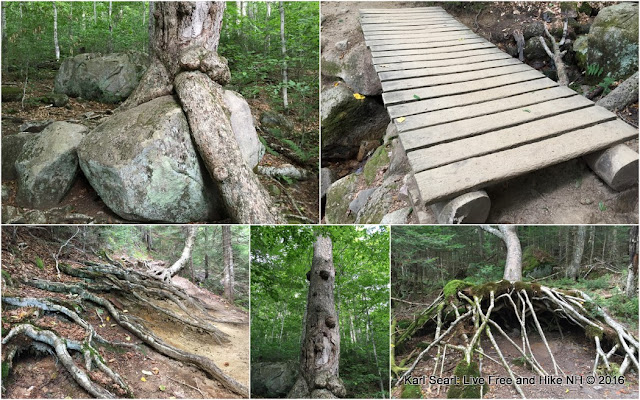 Some cool trail features
Soon, we came to a junction where the Lonesome Lake Trail continued straight and the Hi-Cannon Trail began on the right. The trail description for the Hi-Cannon Trail illustrates it to be very rough and steep. Simply put, it was just that. The first portion had a lot of roots as well as a lot of loose gravel. This made for tough footing along the steep sections…which was most of the length. Soon we came to a junction where the Joe Dodge Cutoff Trail entered from the left. We took a quick break here and continued on.
The second portion (above the Joe Dodge Cutoff) of this trail was still very steep but the terrain also become much rougher. The gravel and roots gave way to large boulders and stones. In a few places, there were even trees growing up in the middle of the trail making it hard to squeeze through at times. There was a slightly restricted viewpoint toward the Franconia Ridge just before the trail made a sharp turn back to the south. This is photographed below. 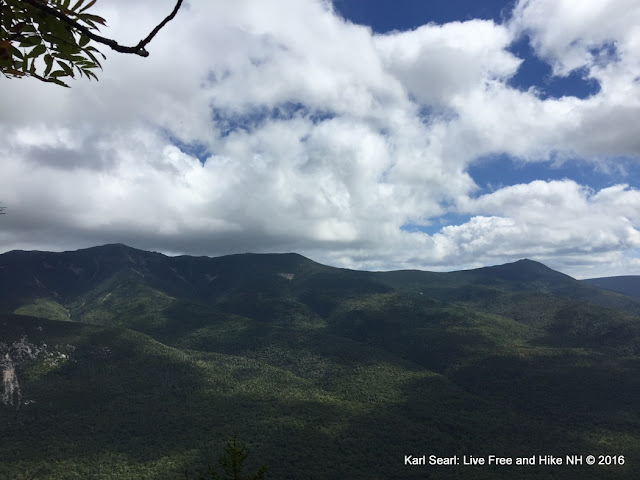 Lincoln, Little Haysack and Liberty from the first viewpoint on Hi-Cannon Trail 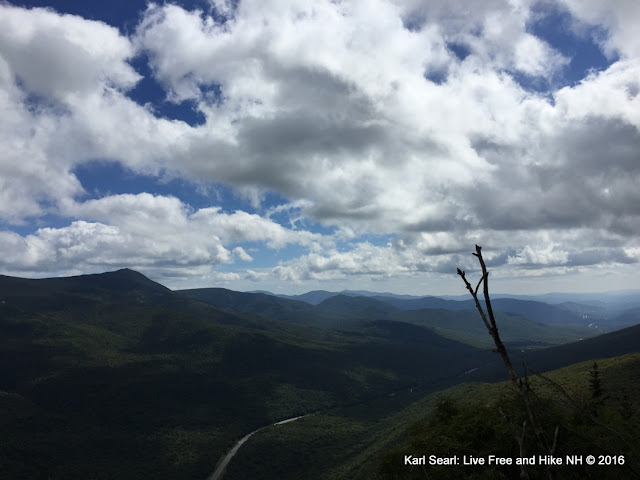 Mount Liberty and Loon to the southeast
After the trail makes a sharp right, there is a natural rock formation on the right side of the trail called the “Cliff House”. Apparently, it is located just before the ladders and you need to bushwhack a short distance up the slope to see it. I was looking for it while we hiked but never did locate it. I did do some research after I returned home and found this Mountain Wanderer blog post which describes it with a photograph.
We soon came to the ladder, which is a major contributing feature that lands this trail on the Terrifying 25 list as an elective hike. The ladder was tedious but not too long. Shortly after the ladder climb, there were many viewpoints south toward Lonesome Lake and the Lonesome Lake AMC Hut. The trail continued steeply in spots and the scrub trees really crowded the trail in at this point, making it a bit claustrophobic. 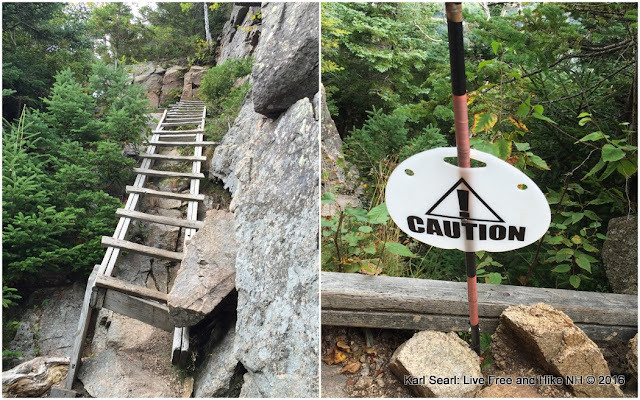 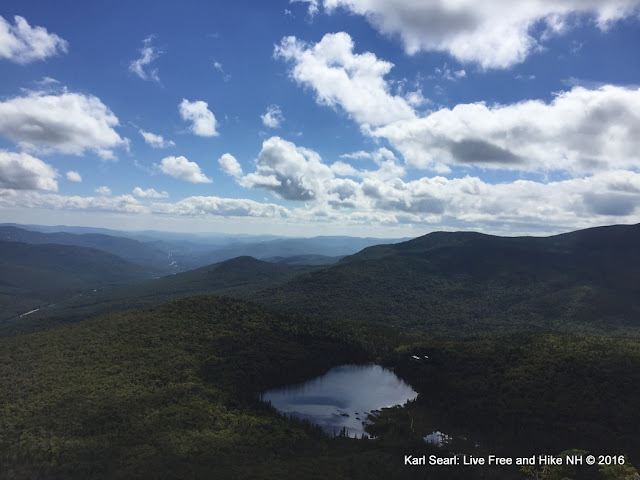 Lonesome Lake from the viewpoint above the ladder section 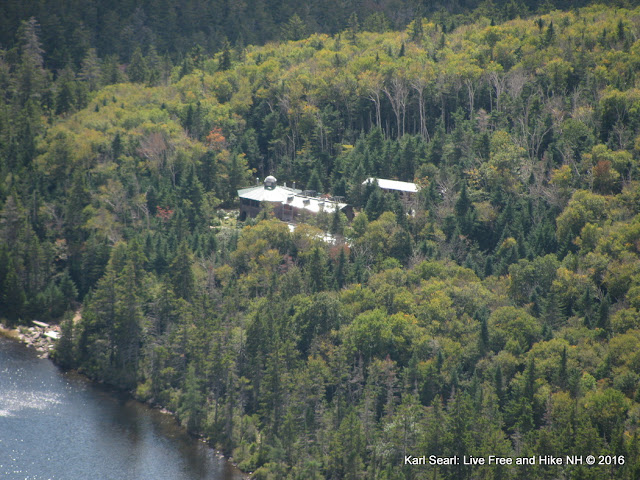 Zoomed in Lonesome Lake AMC Hut
The Hi-Cannon Trail finally dumped us off on the Kinsman Ridge Trail which we were relieved about. This portion of the Kinsman Ridge Trail had a very gradual grade and was much nicer terrain.
Soon we hit the Rim Trail, which circles the perimeter of the summit, leading you to the observation tower, café/bar and some great viewpoints to the Franconia Ridge. As we stepped onto the Rim Trail, we were quickly cutoff by some tourists that had just got off the Tram and were heading to the observation deck. After such a tough hike, we felt very out of place next to the many tourists in khaki shorts and polo shirts, because our clothes were soaked in sweat, stinky and we were utterly exhausted! 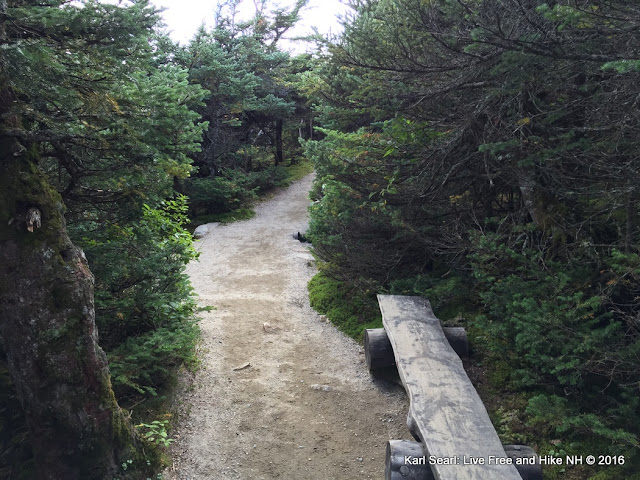 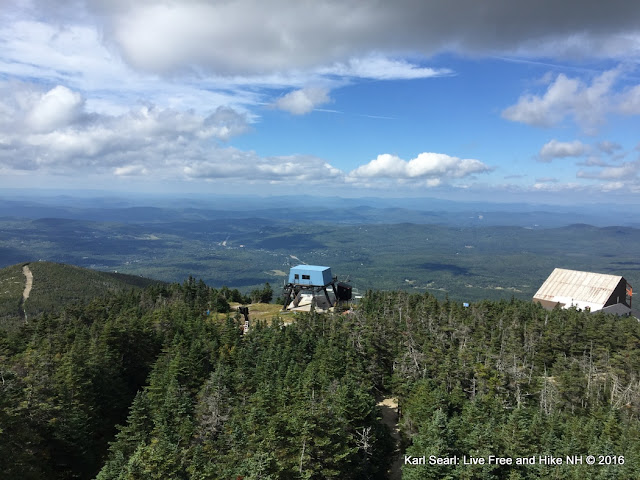 From the deck, view north with the ski lift house in center, tram house to the right (I think) and the Mittersill Trail on the left (I think…and currently closed I think) 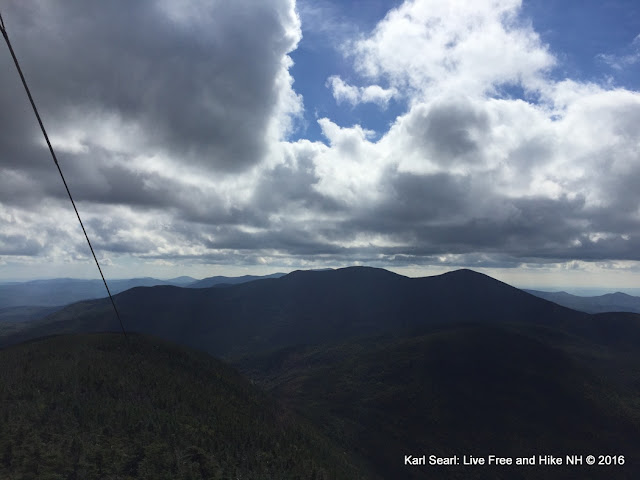 From the deck, view south with the Kinsmans and Moosilauke (I think) in the background

From the deck, pano of the Franconia Ridge (east) to meandering 93 (south)
When we got to the observation deck, I first checked out the underneath and found the USGS Benchmark. We then climbed the stairs to the top platform, awarding us 360 degree views all around. After snapping some photos and enjoying the views, we visited the Summit Café, grabbed a quick bite to eat, and headed to the viewpoints via the Rim Trail. We then started our long, slow trek back down the way we ascended. 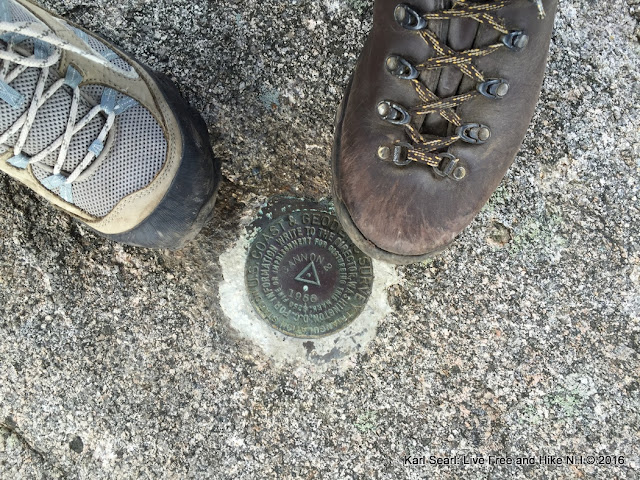 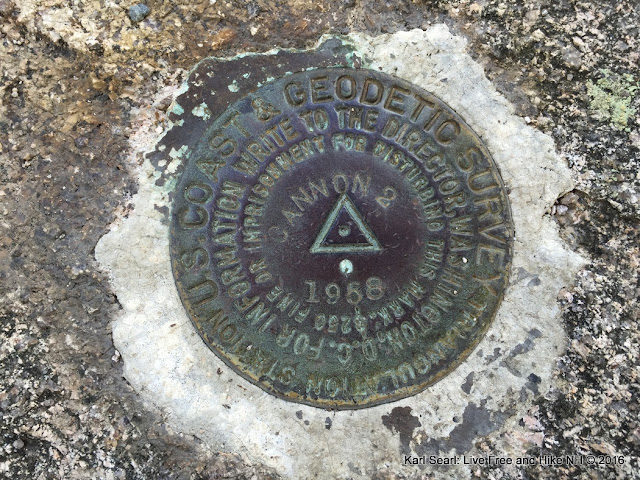 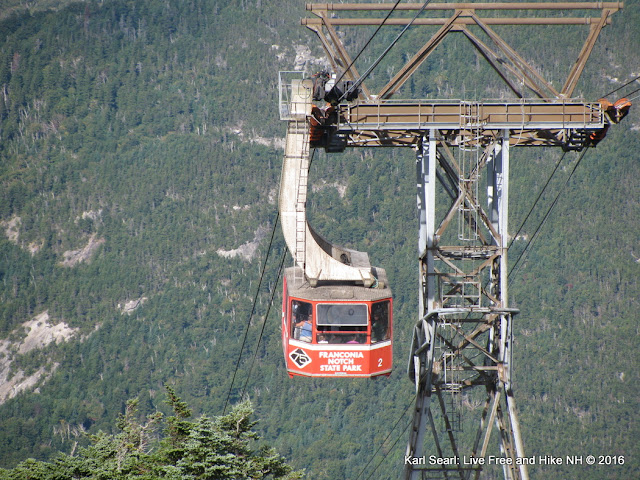 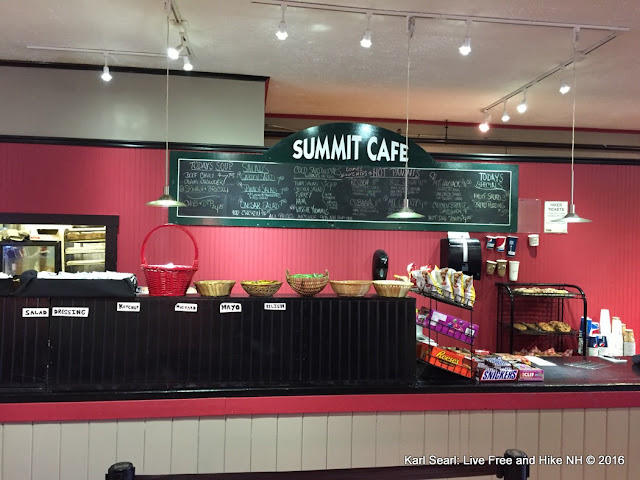 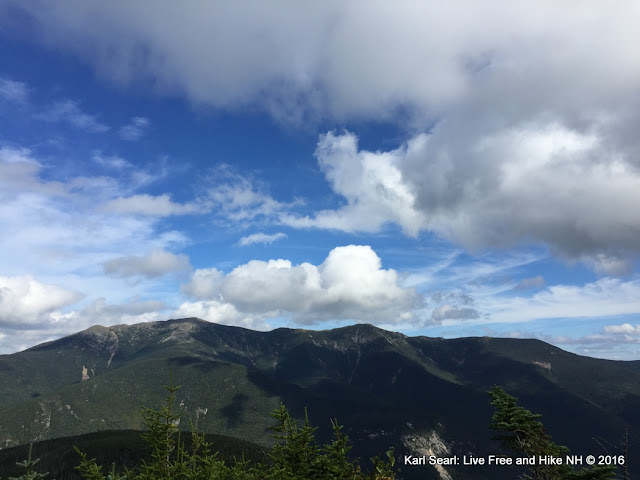 Probably my favorite shot from the day. Franconia Ridge from the Rim Trail
Honestly, this hike was tough. The Lonesome Lake Trail and Kinsman Ridge Trail are in great shape, but the Hi-Cannon Trail is extremely steep and rough, especially above the Joe Dodge Cutoff. As I mentioned, there are portions that are so narrow due to trees growing up in the middle of the trail, I could barely get myself with my pack through. Cannon’s summit was worth the trip, though. We had great views in all directions and a comfortable place to sit and rest. We also checked off another 4K and a Terrifying 25 from the lists. 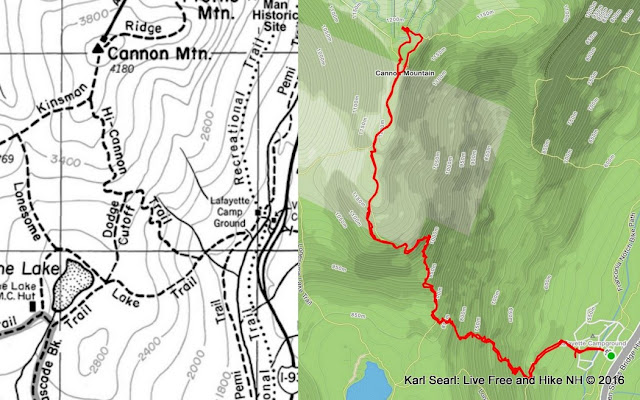 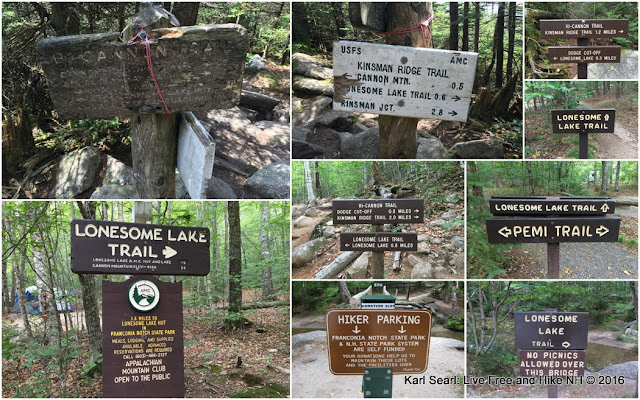 Signage from this trip 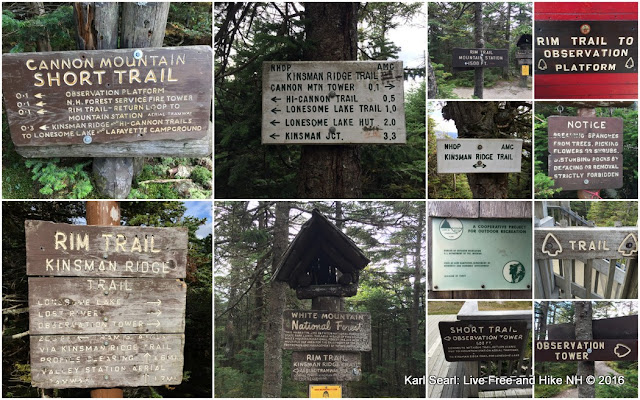 More signage from this trip