Red Rock Canyon's history of geology is millions of years old. Between 540 to 250 million years ago, this part of the continent was under a warm tropical sea. The animals in these vast waters decayed into the seawater and eventually created the surrounding limestone mountains of Red Rock. Around 200 million years ago, sand dunes covered the entire area. These sand dunes hardened due to overlying pressure and the cementing effects of mineral-laden groundwater particularly containing calcium carbonate that glued grains of sand together to create the Aztec Sandstone of the Sandstone Bluffs and the Calico Hills.

Some time later, there were tremendous tectonic movements that created such a large amount of pressure that the underlying limestone was pushed up above the sandstone. Erosion shaped the remaining landscape as we see it today.

Although we have named this area Red Rock Canyon, it is really comprised of around nine major canyons mostly within the escarpment. Each canyon has its own charm and challenges for hikers, scramblers, and rock climbers.

So, today, in the year 2019, those canyons and hardened sand dunes are the playground for thousands of outdoor recreation enthusiasts. Fifteen club members arrived at the Sandstone Quarry Trailhead located 3 miles into the Scenic Loop of Red Rock Canyon NCA for a grueling scramble in the northern section of the Calico Hills.
Scrambling can be described as anything from "stair climbing" rocks to climbing rocks and slabs with the use of your hands. In other words, scrambling is the type of "hiking" you do between following trails and bouldering. In the Calico Hills, this is most hikers' modus operandi besides, of course, all-out rock climbing.

Because of its location, we seldom visit the West Calico Hills. They aren't far from the Calico Tanks Trail but it is difficult to tie them in with other hiking routes. We made that trip over to the hills via a small section of the Grand Circle Trail.

The climb up to the highest point of the West Calico Hills is a good warm-up. It left us breathing strongly! Along the climb, we came across three tinajas that were very full of water. Views of the escarpment and Sandstone Quarry were unique.

Our trip up the big rock hill and back down covered around a half mile. When we returned to the limestone wash below, we began following a series of use trails in the area between the West Hills high point and the Turtlehead Peak Trail. It was a wandering route just to see what we had not seen before. Soon, we were connecting with the Turtlehead Peak Trail and we followed it up to the Petroglyph Corner passing the Mormon Cave, a large cave alcove in the West Hills. All of today's participants climbed up a steep sandstone fin to the right of the ancient petroglyphs using their mantling skills. We turned the corner at the top and descended into the small inlet between sandstone walls.

An outlet in front of us put us on a small use trail that leads to Turtlehead Canyon. (This trail used to be part of the Rattlesnake Trail.) When the trail drops into a wash, we started down.

The wash has a few beautiful scrambles and leads down to an interesting drop slot. If you turn around and look behind you from within the slot, you see Turtlehead Peak.

Turtlehead Canyon starts at the beautiful wash, drops down into the slot, then passes through a dark "alley." Today, the alley was filled with morning sun and shade of leaf designs. Redbud flowers were added to the large mohave yucca blooms, desert marigolds and dandelions, purple asters, Utah Penstemons, and Cliffrose. Spring sprang and I almost missed it! We circled around the Redbud trees and joined the Rattlesnake Trail at the red rock slot. A left turn into the slot took us to the Red Cap approach area. We continued a traverse around the red rock passing the large white boulders that look somewhat out of place after falling in years past from the white sandstone walls above.

By staying high, this trajectory sent us on a scrambling journey above the official Calico Tanks Trail. Next, we climbed the red wall to our left and crossed over the first set of CCC steps on the Trail.

We passed the bottom of the Mass Production Wall descent where a small spring was running then climbed the next set of CCC steps on the Trail.

Taking a left turn at some large boulders, we started up a neighboring small canyon, climbed the left side wall and followed the wall until it dropped back in. A couple of climbs to our right put us at the Ledge Tank. The tank was full. The view was fantastic. And, some shade was offered. We stopped for our break at the pond finding a few tiny fairy shrimp in the tank. (Anostraca is one of the four orders of crustaceans in the class Branchiopoda; its members are also known as fairy shrimp. They are usually 6–25 mm. ~ Wikipedia) We dropped back to the Trail and climbed up to a completely full main Calico Tank. It was huge! I wonder if it's okay to bring a raft! Probably not. Remember the wildlife!

We circled around to the opposite end of the tank, in awe of its unusual beauty. Then, after a brief pause, we started down the steep descent to Calico II.

It is a descent but use of many muscles are required as we waded through loose rocks, sit and slide situations, big step downs, and finding the preferred routes.

On the way down, we saw a glimpse of a gray fox and a quick view of a chuckwalla … or a gila monster. (Watch those gila monsters! Very dangerous!) Recently, a rock climber in Red Rock was bitten by one. Their poison is akin to a rattlesnake's. We passed several rock climbers on the route down. At least one was hanging from a wall about 70 or 80 feet above the ground. The descent route passes through another rock climbing venue where there were two ladies having a great day on the walls. Eventually, the route drops into a grassy area where there are a few paths through the brush.

Coming out of the brush, you find yourself at the bottom of Angel Canyon. We turned to the right and made our way toward the Scenic Loop and the Grand Circle Trail.

A right turn on this trail will take you back to Sandstone Quarry and the cars. There are 300 feet of gain in elevation during this last mile of our loop.

At the bottom of the descent, I was worn out and when we junctioned with the Grand Circle Trail below Calico II, the heat hit me strong. I was a bit slow in that last mile! Besides that, the hike was very well received and it was a beautiful but warm day. The route was about one mile longer than I had anticipated but worth repeating in the future. A fun morning of scrambling.
4.7 miles; 1400 feet elevation gain; 4 hours; average moving speed 1.2 mph 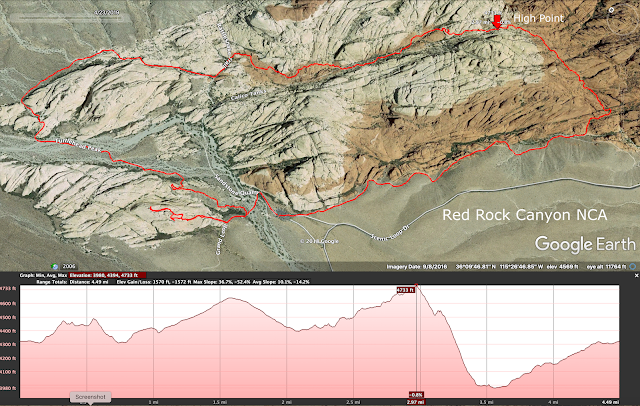 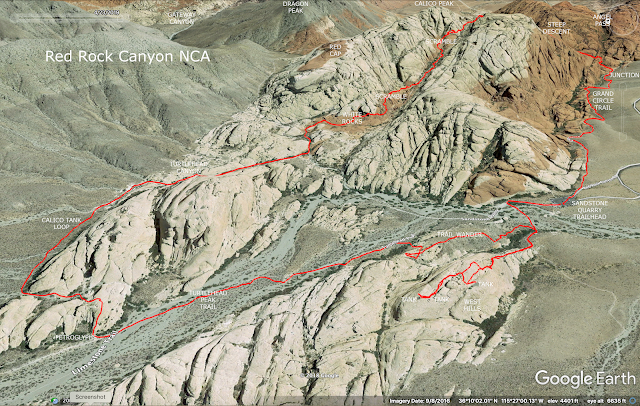 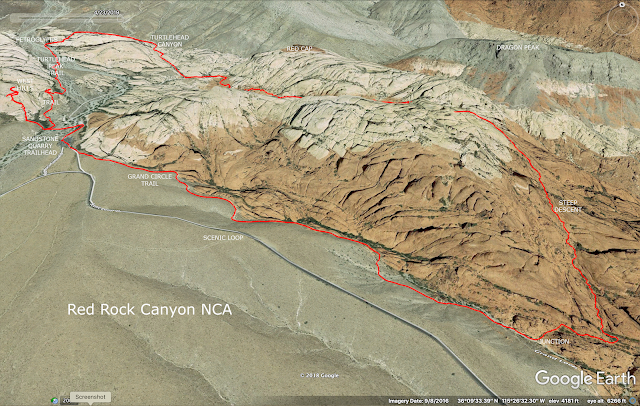