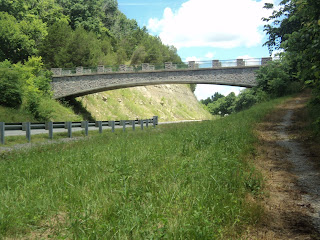 Directions to the trailhead: From Paris, take US 68 north 22 miles to the signed park entrance on the left. Turn left to enter the park, and drive the main park road to the Pioneer Museum. Park in the parking lot in front of the museum.
The hike: Most history books will tell you that the American Revolutionary War ended when British General Charles Cornwallis surrendered to Patriot General George Washington in Yorktown on October 17, 1781. While major military operations ended at that time, conflicts involving the British on America’s western frontier continued for many years thereafter. One of those conflicts was the Battle of Blue Licks, which occurred in present-day northern Kentucky on August 17, 1782. Earlier that month, a group of 50 British Loyalists allied with 300 American Indians had come from present-day Ohio and attacked Bryan Station, a frontier settlement near present-day Lexington. When they learned that Kentucky militiamen were on their way to relieve the settlement, the Loyalists and Indians withdrew to the northeast to return to Ohio. Led by John Todd and Daniel Boone, the Kentucky militiamen decided to pursue the Loyalists, and they caught up to them at a spring and salt lick on the Licking River known as Lower Blue Licks. Just before the battle, Daniel Boone voiced concerns that they were being led into a trap, and his concerns turned out to be justified. After crossing the Licking River and advancing up a hill, the British and American Indians attacked from concealed positions in ravines on the other side of the hill. The attack was devastating on the Kentucky militiamen: nearly half of the militiamen were killed or taken captive. Daniel Boone survived, but the dead included John Todd and Israel Boone, Daniel Boone’s son. The remaining militiamen managed to retreat to Bryan Station. The site of the Battle of Blue Licks became Kentucky’s fifth state park in 1927, when local citizens donated the land to the Kentucky State Parks Commission. The park today offers a nice 32-room lodge, a 51-site campground, a boat ramp on the Licking River, some athletic fields, some picnic areas, an interesting Pioneer Museum, and 4 hiking trails totaling 3.5 miles. The hike described here uses most of these trails, and it forms a grand loop tour of the park’s grounds. Two points of interest lie near the parking area. The historic Pioneer Museum contains artifacts from life on the Kentucky frontier and offers an interesting video about the area. Also, the battlefield is located uphill and to the left (north) of the museum, and it features a large stone monument in a sparsely treed grassy area. No trails pass through these two areas, so you will want to check them out either before or after your hike.

The only trail visible from the parking area is the Buffalo Trace Trail, which will be our return route. To make the climbing easier, this hike starts on the Licking River Trail. To find it, head down the stone steps that exit west, the opposite side of the parking lot from the Pioneer Museum. Walk around a picnic shelter and enter the woods at a signed trailhead for the Licking River Trail. Another sign tells you that this path was the route used by Daniel Boone and militiamen during their retreat to Bryan Station. The single track dirt trail descends via a moderate to steep grade on a somewhat rocky and rooty course. This trail gets very slippery when wet, and I had to be very careful on this descent because I hiked here the morning after a thunderstorm softened the soil. After descending 150 vertical feet over 0.25 miles, the trail deposits you on an asphalt road the park map calls River Road. Turn left to continue the Licking River Trail. The Licking River appears through the trees to the right here.

A short road walk brings you to the park’s boat ramp, where you need to continue south to leave the park road, walk through a small mowed grass area, and find where the Licking River Trail reenters the woods at another signed trailhead. The trail crosses a wooden footbridge before curving left and climbing slightly to reach a three-way trail intersection. The Savannah Trail going left leads to the park’s campground, but this hike turns right to start the Heritage Trail. On my visit this trail was closed due to storm damage, so I had to take a detour via the park’s roads. The Heritage Trail crosses Old Maysville Road, which leads to the historic Licking River ford at Blue Licks, before passing under the US 68 bridge over the Licking River. Next you pass Tanner Station, a reconstructed pioneer settlement founded by David Tanner to exploit the area’s salt licks. For the next 0.5 miles the trail remains level as it passes through the Licking River’s floodplain.

2 miles into the hike, you begin a gradual to moderate climb up a wooded bluff that overlooks the river. The trail comes close to US 68 for several hundred feet before crossing it on a fantastic stone, concrete, and steel pedestrian bridge. Just after crossing the bridge, the Heritage Trail ends at a T-intersection with the Buffalo Trace Trail. Turn right, and after another 1000 feet of gradual climbing you reach the parking lot for the Pioneer Museum, thus completing the hike. Make sure you check out the museum and the battlefield before you leave if you have not already done so.