Every year, my company goes on a wellness hike which I try to help plan. Last year, we hiked Catamount Hill in Bear Brook State Park (Trip Report) which was a great hike for all ages. This year, we decided to explore more of Bear Brook State Park and decided to hike up Bear Hill (PDF Bear Brook State Park Map Here). It was a pleasurable hike, but the desired destination of the summit was probably one of the strangest and scariest hiking objectives I've visited. I’ll explain more on this later.
Lucky for us, we decided to hike on August 25th which was the National Park Service’s birthday. That being the case, New Hampshire State Parks were giving free admission to all that visited and entered.
In order to reach the Bear Hill Trailhead, we decided to park at the Hayes Field Parking area which is located on the west side of Podunk Road in the heart of the park. Essentially, this parking area was a large field that could fit many cars and horse trailers (as horses frequent the roads through the park). 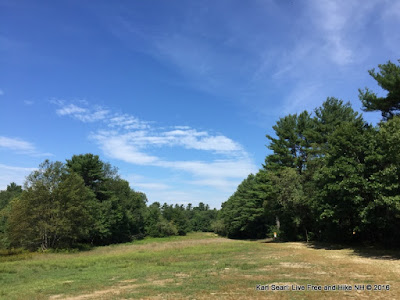 Hayes Field Parking Area on Podunk Road
We started our journey heading South on Podunk Road. We quickly crossed a bridge which brought you over a small pond that was connected to Hayes Marsh. This was one of the more picturesque scenes we got for the day, being able to observe painted turtles and frogs sunning themselves on rocks, as well as a great blue heron relaxing in the late morning heat. 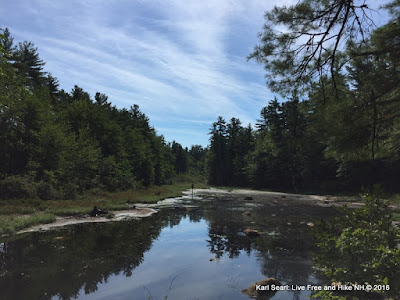 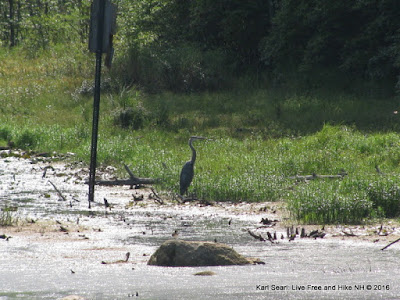 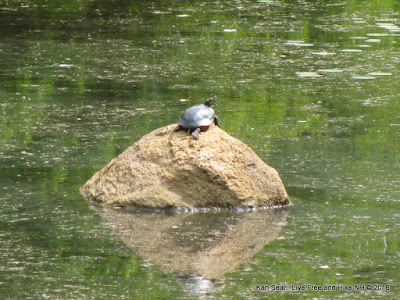 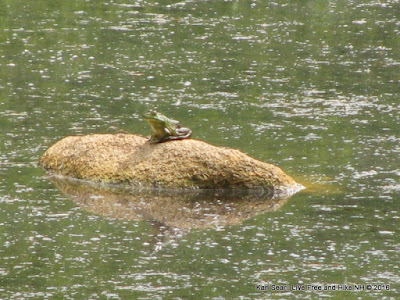 Frog Sunning!
Continuing up Podunk Road for about 0.25 miles, we came to the trailhead to the Bear Hill Trail on the right which was marked well with a trail sign. The beginning of the trail was gentle and meandered through some pine forests. The trail itself was very well maintained and had some great bridge features over areas that would most likely be wet…when there isn’t such a bad drought in effect. 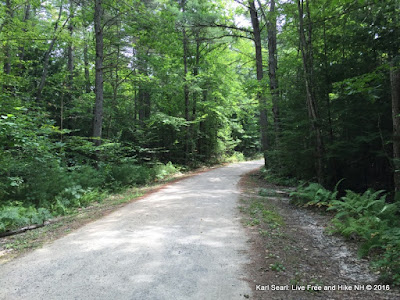 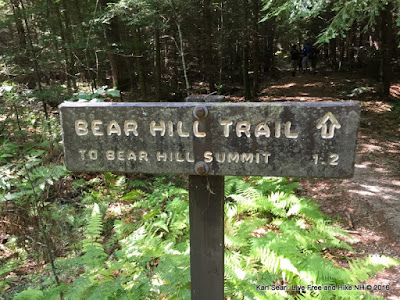 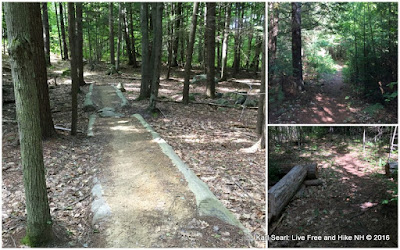 Great trail work here!
As we continued, the incline stayed gentle for about 0.75 miles until we hit a junction. The Bear Hill Trail took a sharp right and headed up at a steeper grade. To the left, a small connecting trail (unnamed) brought you back to Podunk Road (you could see the road from the junction). We continued up the Bear Hill Trail. 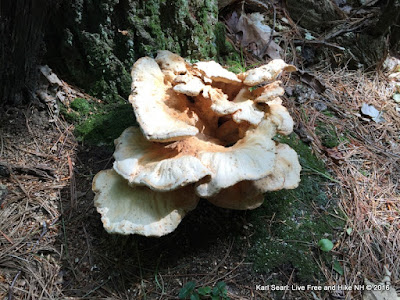 Friendly Trail Fungus
The steeper section still had a nicely maintained trail to follow. In about a quarter mile, we reached another junction where the Bear Hill Trail continued descending the south side of the hill. We took a right at this fork and continued toward the summit in just a hundred feet or so.
The summit was strange. It was almost as though the ground was moving all over once you got up there. Also, there were large piles of freshly dug up dirt everywhere. Quickly, we realized the reason the ground was moving was because of millions of ants…not friendly ants, but the ones with red middle sections, that bite aggressively. The piles of dirt were gigantic ant hills. We had walked into the largest ant colony we had ever seen and we were being attacked! 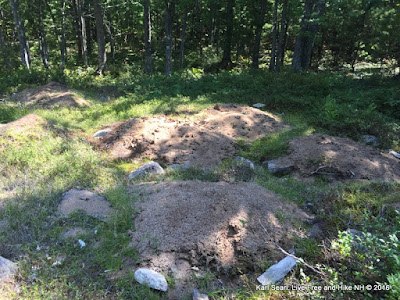 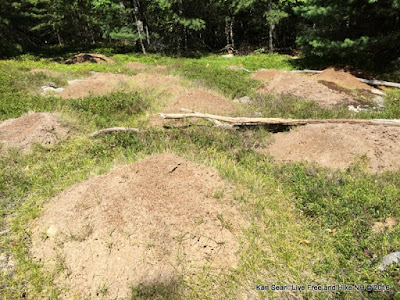 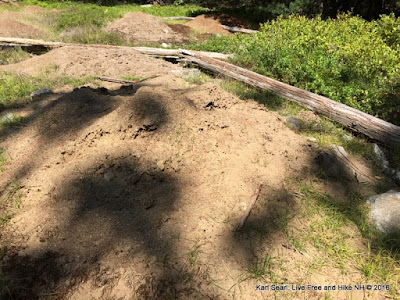 And more!
The ant hills were probably 3-4 feet in diameter and 2 feet high. There were probably 20 to 30 ant hills total. I took a few photos quickly until I realized these ants weren’t friendly and they were all over me and my daughter. I quickly threw her over my shoulder and ran down the trail about 150 feet or so until I saw no ants walking around on the ground below me. At that point, I wiped off the few ants remaining on us (as they were still trying to bite through our clothing and boots).
After our hiking party was to lower ground and ant free, we made sure everyone was okay and then hiked back down to the junction in the trail prior to the steep section. There we found some logs that trail maintainers had left behind to sit and have lunch. From that point, we retraced our steps back to the Hayes Field parking area.
I was actually upset we couldn’t spend some more time on the summit of Bear Hill to explore. As many hills and mountains in New Hampshire do, this summit had some history to it with some artifacts left behind. It was a location of one of the many old fire towers in New Hampshire. It stood 45 feet tall and was installed in 1939 and removed in 1983 (more information here). But the old cement blocks which supported the tower are still up there. I did get off a picture of one of the foundation supports before retreating from the summit. I really wish I had more time to investigate! 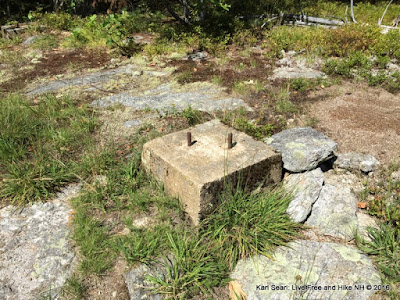 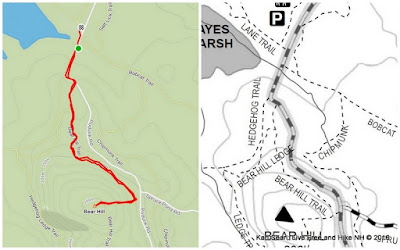 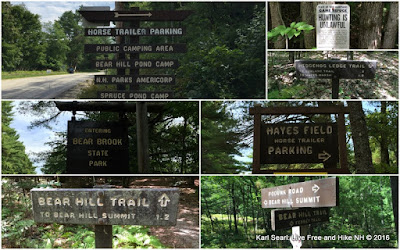 Trail Signage for this Trek
One the way out of the park, I did notice that on the west side of Podunk Road was an old sign which said “Unknown Civil War Soldier”. Not knowing what this was, I had to stop to check it out. Behind the sign was a clearing with a newer, marble headstone with a flag. Again, it simply read “Unknown Civil War Soldier”. I’ve done some quick searches online and can’t find anything with regards to the tombstone. How did he come to be there? There were no battles in this area that I’m aware of. Anyway, if anyone has any info on this, I’d love to learn more about it. 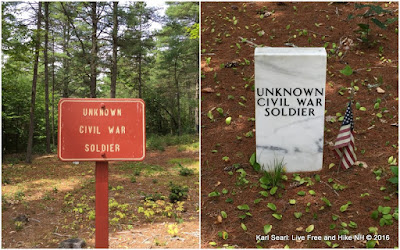 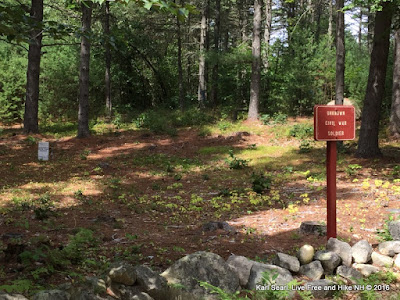