It’s been a long time since I’ve written in my blog. There’s a couple reasons for that. First, I just haven’t been too active. Less outside activity means less activity on my blog. Second, and maybe what has impacted this the most is I have a new job. A longer, rat-race commute, new challenges and needed focus in this area has kept me strapped to my office chair for a bit. That being said, the weather is warming up and I’m excited to get back outside for my lunchtime treks. A new location came with the new job, so that means lots of new areas to explore!
Before signing off this past November, there were a couple short reports that I did not have time to post. This is one of them. Last fall, I decided to check out Bald Hill in Newmarket, NH. This hill is considered the town’s highpoint at 281 feet in elevation with no published trail leading to the top. I also found absolutely no trip reports on it so I’m hoping this one might serve as a good reference to some. 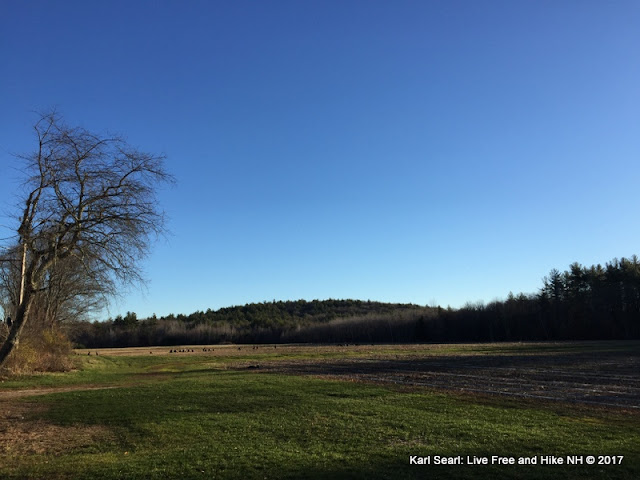 Bald Hill as seen from Jacob's Well Road inEpping, NH, near the Newmarket border
I started my trek at a cul-de-sac which is at the end of short, new road off from Bald Hill Road in Newmarket called Hayden Place. This new road is not on any of the street maps online, but is shown on Google Map’s (Earth Satellite View) as shown below. This short road does climb Bald Hill for about one tenth of a mile. 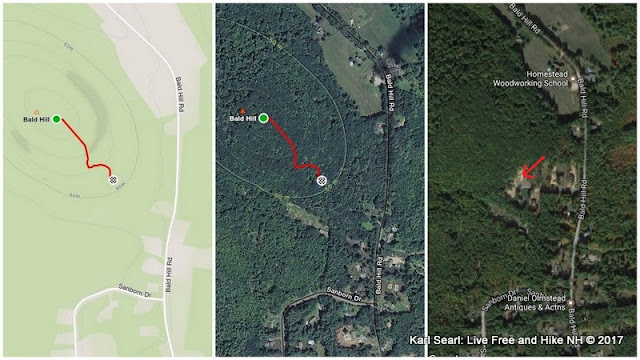 The maps with the GPS are from Strava, the right map is GoogleMaps (Satellite View) with an arrow on the cul-de-sac.
Along with the new construction going on in this development, a set of stairs have been erected leading northwest up the banking from the cul-de-sac into the woods toward the summit of Bald Hill. Along with the stairs, there’s a new kiosk which was not populated. These two things combined leads me to believe that the intention is to start a trail network at this site. 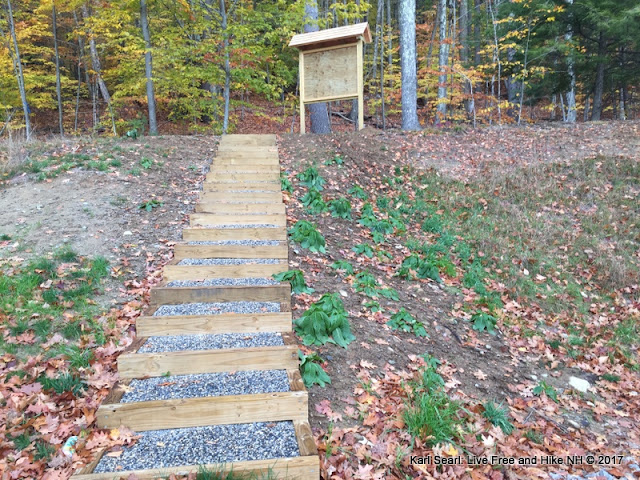 As mentioned above, there is no current trail network on bald hill. It was easy to determine which direction was up so I bushwhacked my way northwest through open woods. The terrain did change from gentle to steep grades a few times. The hill finally plateaued onto a large, flat topped hill. 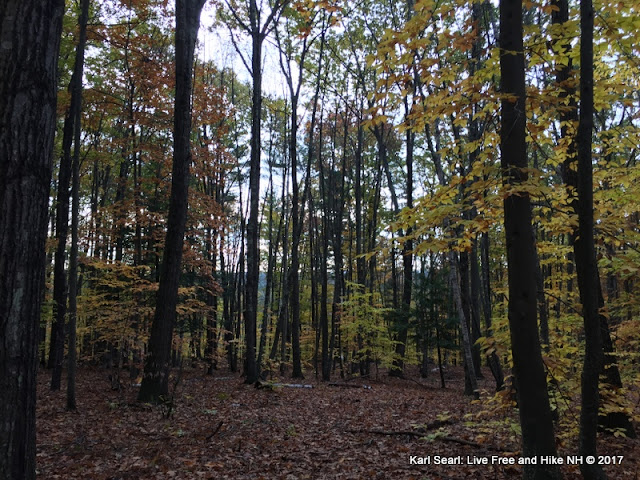 View from the top…a little restricted!
The summit was completely wooded with no views. I did find some old rubbish and some hunting blind structures. There was also an old stone wall that ran the northern parameter of the high spot on the hill. Near the stone wall, I found a yellow stake. This stake was oddly shaped and didn’t look like a property marker. I’m assuming it was the summit marker. I could be wrong on this assumption but it did seem as though it was the high spot. 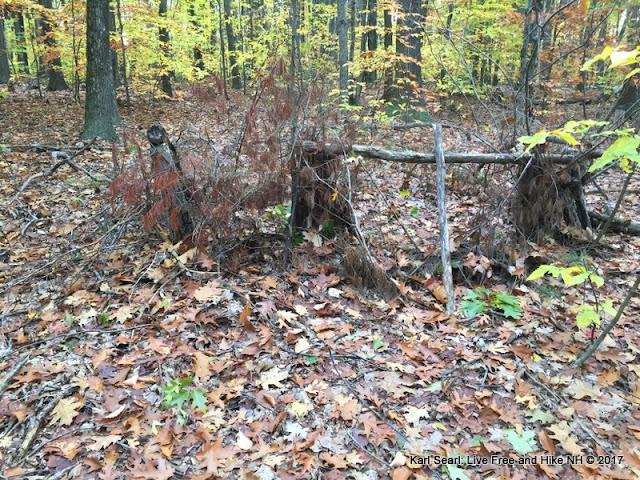 Old hunting blind at the top 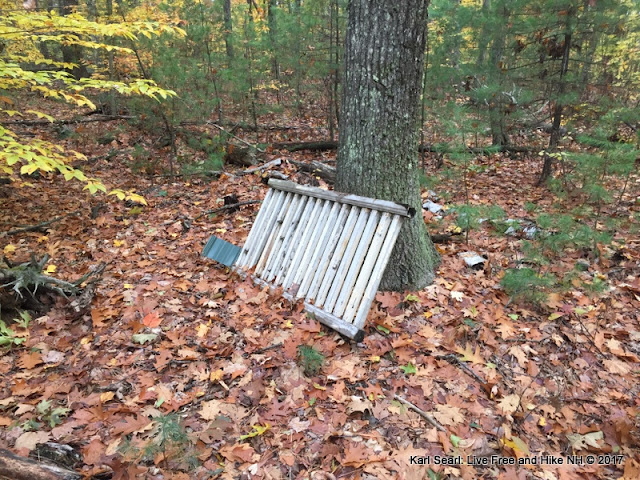 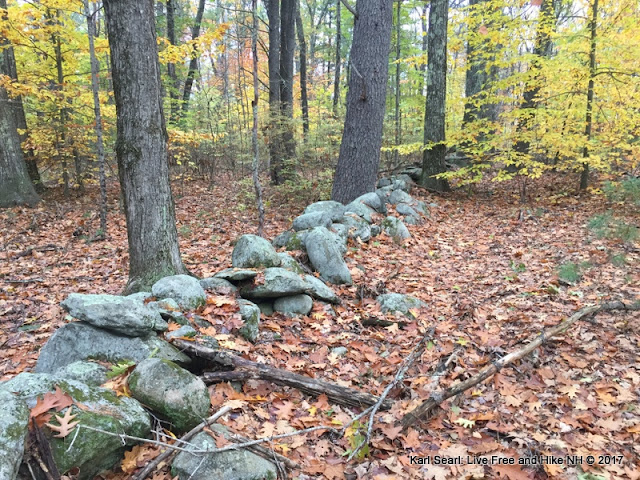 Stonewall on the northern perimeter of the summit area 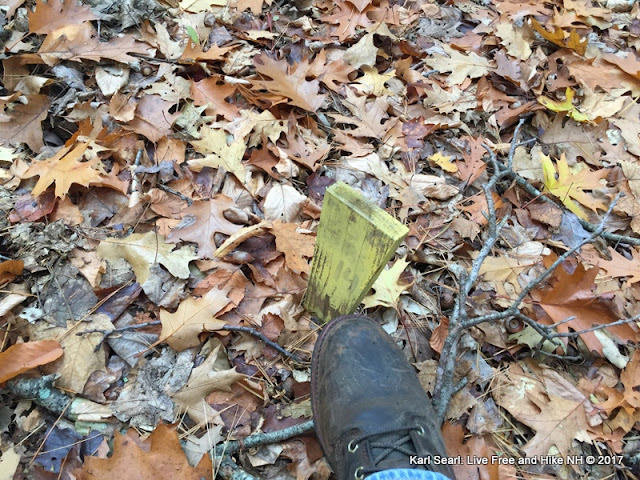 What I think is the summit stake, but could very well be a property bound
From the summit, I worked my way down the hill back to my truck using the same approximate route I used going up. It was a quick round trip, maybe only 20 minutes but it was cool nonetheless. I got to visit another highpoint in New Hampshire and it was a small bushwhack which I’m beginning to enjoy.