A better day in the mountains.

Hike Mike
8 min read
26 views
Comments Off on A better day in the mountains.

I have visited and revisited Mummy Mountain and Hagues Peak a number of times now. These two have become a early season tradition of sorts, due to proximity to home, ease (or difficulty) of access, and at least one of the access options being pretty well traveled, with any snow well packed. There might be a short stretch of snow around treeline, but the going is generally pretty clear and easy once you get to the enormous east slopes of Mummy, which don't hold much snow due to exposure. It's also a good way to have a stretch above treeline and work hard.
Last year I had a heck of a time on these two, and not due to any difficulty. I just was not in a good place mentally and very upset due to the very recent death of my dog. It was a hard day all around.
This year I've generally been feeling good, and wanted to give it another go for the aforementioned reasons, as well as for perhaps some chance at a redemption of sorts.
Again, I planned to start and end at Lumpy Ridge, looking for a longer day and more elevation gain than last years route selection. I was (not unusually) the first car in the parking lot at 530, and on the trail shortly after. I resolved to run as much as possible this year, and to try to keep my mind and memories on a positive track. 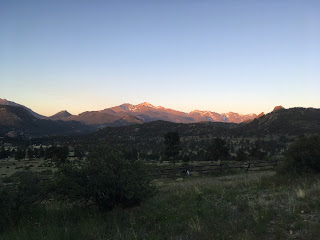 It was easy at first, as I arrived just as the sun was starting to rise, and got to witness the alpenglow light show on the peaks to my south.
One of the major obstacles to any speed last year was the amount of dead fall on the Black Canyon Trail west of the intersection with the Dark Mountain Trail. Fortunately, that was largely not an issue this year. Maybe it wasn't as much of an issue as it felt like last year either, and it was all in my mind. 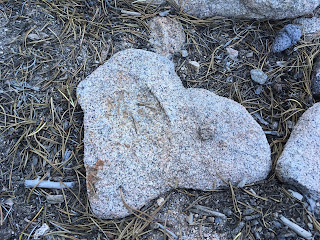 I was looking for it, and did manage to find the same exact rock out there on the trail. I noticed its likeness to a heart shape last year, which lead to one of the many breakdowns as I thought about my pup who had died the day before.
As you near the apex of the trail, the terrain changes a bit, going from a heavily forested to a more open character. You cross the Black Canyon Creek a few times, and I was able to fill up on water from it. 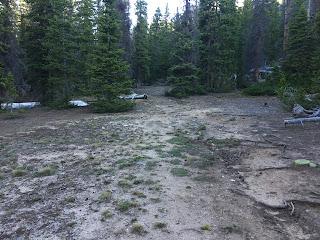 Close to breaking north to visit Mummy.
There is a pretty well put in social trail up here, which leads from the trail up to the east face of Mummy. I've found it several times, but missed it this year and eventually went for it, deciding I was past it. Thus, the initial gain was a bit more difficult, with some bushwhacking and maneuvering to avoid the little snow there was.
And how little snow there was; this year is the driest I've ever seen it around this time of the year. 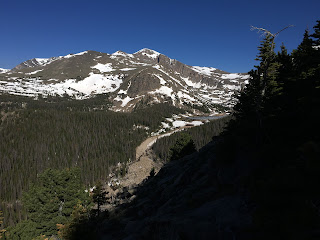 Looking up at Fairchild Mountain and the Crystal Lake basin from the climb. 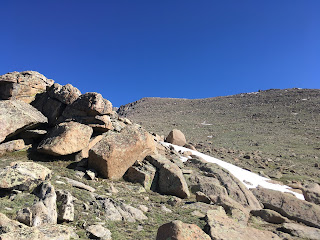 And up the east face of Mummy- no snow! Not that the climb was any easier. 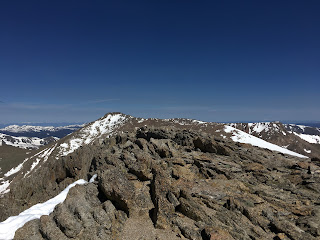 I finally reached the summit and looked across to Hagues. Some years there's been enough snow that I haven't visited Hagues at all, this year… 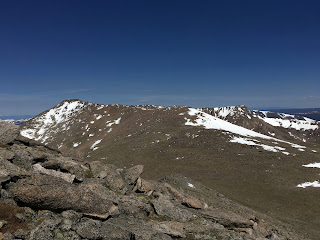 Largely clear sailing. I don't think I stepped in snow once, as it was all avoidable. I was able to stop and refill water between the two from a melt pool, the good thing about doing these ridge traverses in the early part of the year. 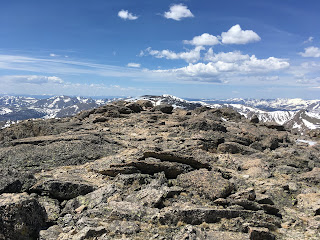 Hagues brought the usual good views, though I actually found a better approach by staying down and north of the ridge a bit. The air was still, and I met the ravens who must live in the area at the summit. It was pretty neat to actually be able to hear them flying, the air rushing around their wings and bodies. 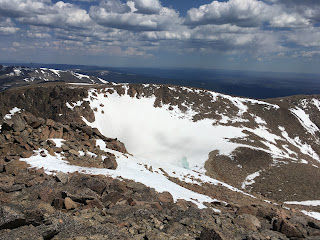 I was equally surprised to look north and see Rowe Glacier Lake and area were largely clear- or at least the snow could be avoidable.
I made a decision here, which was to not go back the way I came, but head east out to the Dunraven ridge, and then descend down the Husted Trail to North Boundary, and then take that south over the few lumps in the way. 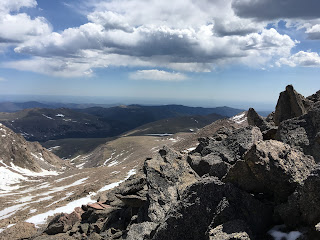 Looking out to the Dunraven Ridge, some rock at first and then smooth sailing on tundra. 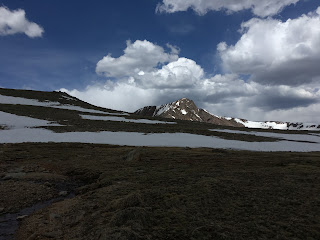 The dramatic east face of Gibraltar Mountain.
I found running water in this area and filled up yet again, as the next definite place I'd be able to fill up was at West Creek, and definitely a good bit away from where I was. And as it was pretty warm, I'd need every drop. 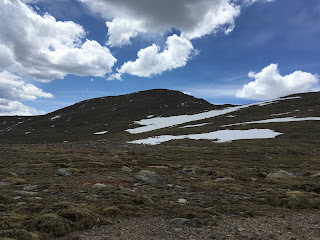 The last time I'd see water for awhile.
The excursion out to Mount Dickinson went without issue, and I saw several herds of elk along the way. I briefly headed back west from the summit and then dropped south, following occasional cairns. 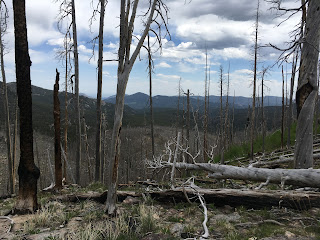 Due to the 2010 Cow Creek fire, there is a ton of dead fall along the way. Up until now, I'd only done this in winter and it was alot easier with the snow covering everything. Travel was pretty tedious until I reached the still living portion of the forest and got on a good trail.
At North Boundary, I turned south and was able to find water almost immediately. Great, because I'd been out for at least half an hour already despite the fill up near Dunraven. There was a RMNP trail crew out, and I made sure to thank them all for their hard work.
I jogged and actually ran some of the fun downhill to West Creek, crossed it, and started up the steepish climb on the other side. It's only about 500 feet of gain, but it always feels worse, particularly this late on a big day.
I took the Cow Creek trail west, and realized I'd forgotten how long it takes to get to the Gem Lake trail, but it came soon enough. And now for the final 1000 feet of vertical. There are some steep parts here, but I was able to keep a high pace and power hike most of it.
I arrived at a peacefully deserted Gem Lake. I expected to see a ton of people there, even though it was now around 530 at night. 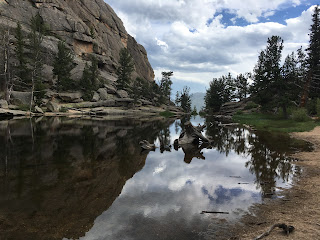 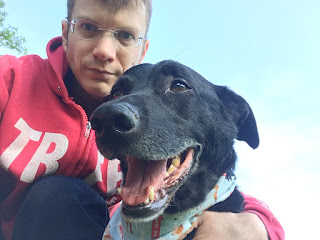