A bad day in the mountains.

Hike Mike
10 min read
47 views
Comments Off on A bad day in the mountains.

I'd say it's been more than once that I've had the conversation with a friend. "There are no bad days in the mountains," he'd say, and I agreed. After all, this is the place I come to find peace and solace, to exercise my body and my mind, to recharge myself. There have been hard days in the mountains. There have been times I've wanted to just give up and not go on, and eventually made my way back home with the help of several pep talks along the way. There have been times I've gotten lost. There have been times I bushwhacked through thick stuff for hours, and hated it. But there have been no bad days.That all changed when my alarm went off on June 8th at 430am. Yes, I wanted to keep sleeping, but I often do. It was the promise of adventure that got me up and going. It was the thought that this day WOULD MAKE ME FEEL BETTER.You see, when I woke up on June 8th at 430am, it had been less than 24 hours since I put my dog to sleep. I had carefully planned my three days off this week. Tuesday I would spend the whole day with him and do all the things he always loved. Wednesday morning he would leave this world, and Wednesday afternoon I'd take the other dog for a hike. Something to get us both out of the house and a way to have some fun together. Thursday, I'd head to RMNP and do one of my favorite summer "warm ups", Mummy Mountain and Hagues Peak. And, since I planned to do this as a training run, I'd start from Lumpy Ridge (also) for some more distance and elevation gain. It seemed like a good idea on paper. I started right at 6, with just a few other cars in the parking lot. I planned to run everything but the steepest uphills. Which meant I should've been able to run quite a bit of it. 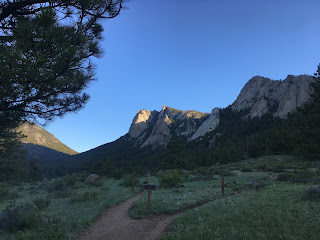 Sunlight on Lumpy Ridge.
The plan was going smoothly and I was moving well up until about a mile after the intersection of the Cow Creek and Black Canyon trails. For it was here that I discovered the dead fall had not been cleared at all past the McGregor Campsite. 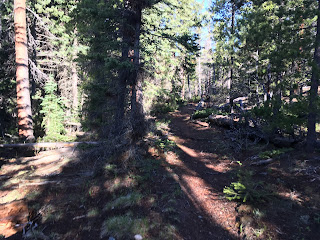 Somewhere on the Black Canyon trail.
This was a psychological blow; my planned run now faced mountains of dead fall before I even hit another obstacle of snow on the trail. It was hard to keep any pace. Run for a few minutes, then stop, then find a way around, which was anything from an easy few steps to a short bushwhack ending with having to refind the the trail on the other side.
My mind was not up to the task at hand. I'd already cried several times. I felt emotionally exhausted. 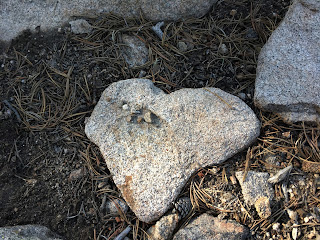 I normally take photos of heart shaped rocks to email my wife at a later time, but when I saw this one, all I could think of was my pup, and I lost it. I was crouched in the middle of the trail for several minutes crying as hard as I ever have. I reached out and touched the rock as if it were him. I wondered if that pain of memory would ever go away. Writing several weeks later, the pain of memory has subsided. At least I can now think of him without crying. 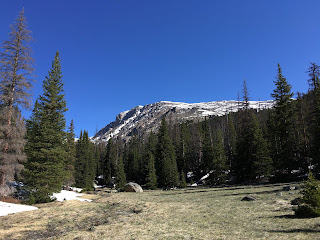 In a meadow nearing Mummy Mountain.
I could see the peak now, and to my surprise, there wasn't much snow, especially considering the late and heavy snowfall. That at least was a tally mark on the things are going good side.
But I felt horrible. Tired, slow and sluggish. What was I doing out here anyway? Whose good idea was this? This was a horrible plan for a training run, why did I think this would work? And now f@#$%^& snow to contend with?
But I kept going. I found the thin social trail near the Black Canyon/Lawn Lake trail intersection and started up. There definitely wouldn't be any running from here on. 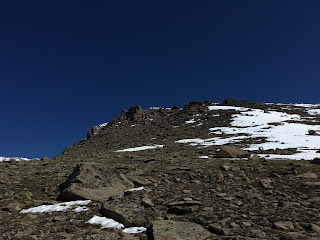 On the expansive east face of Mummy. A distinct lack of snow.
It felt like it took me forever to reach the summit. But I did. 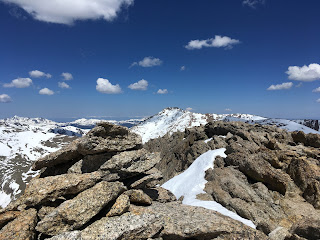 Looking out to Hagues from the summit of Mummy Mountain.
The register was visible, but still in the icy grip of winter, and I could not get it loose. Did I want to go on to Hagues as planned? Emphatically no. In fact, I wanted to be just about anywhere but where I was. I was not feeling better. I was not happy. But I had water, food, and weather. My mind went one way and my feet went another. Onward. 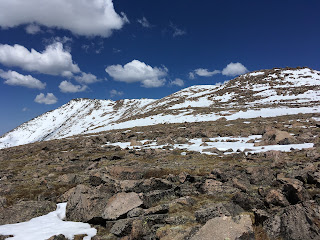 Hagues typically holds more snow, being slightly farther west.
The area between the two was pretty dry, holding lots of snow melt (aka water). I wanted to make the trip out to Hagues and back as quickly as possible. It's about 1.5 miles each way. I had it in my mind that my fastest time ever was about two hours. Now looking back, it looks like that trip took me about two hours one way, which seems unbelievably slow. 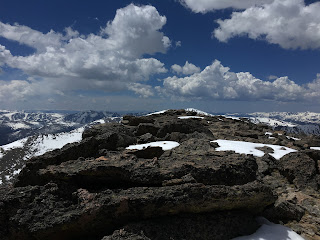 It took me an hour to reach the summit of Hagues Peak, where I was able to sign the register as the third ascent of the year.
But I felt like I was moving slow, which added to my frustrations. And then I looked back… 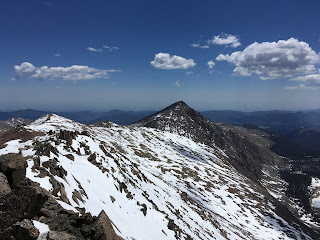 Now I had to go all the f@#$%^& way back!
I am not normally one to curse, but the expletives were flowing free this day. I reversed my route, but stayed directly on top of the ridge as much as possible to maximize my time on rock. 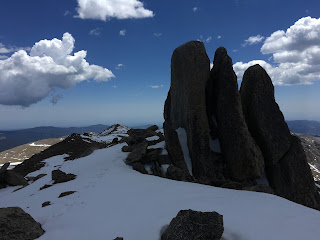 Near Hagues and some of the neat rock features east of it. Not that I was enjoying them at all. 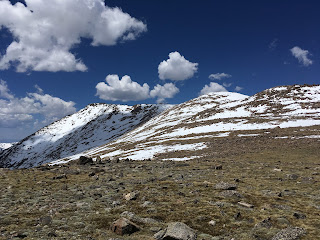 I was able to refill water between the two peaks.
I stopped at the summit of Mummy again. I checked the GPS app on my phone to see that my pace was now around 25 minutes a mile. Definitely not fast enough to be considered a run. Not fast enough to finish the race I signed up for before the cut off. Maybe I should just not do the race. All this training and I'm not fast enough. These horrible thoughts continued to echo through my head as I descended Mummy. I took a picture of this rock formation when I started up, for nothing more than to have a visual reference on the way back. It was only now that I noticed the resemblance to a dog lying down. And, of course, I lost it again and cried for several minutes before continuing on.
I finally made it back to the trail, and was able to follow my footsteps back. One redeeming factor was that the snow was in good shape, almost always able to support full body weight without sinking in much at all.
I pretty much gave up on running. I was moving so slow there was no point. Or so I thought. 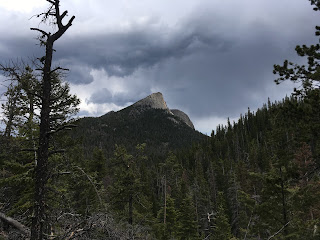 The Needles from somewhere.
I felt like I was dragging. I finally hit the Cow Creek/Black Canyon intersection again, and managed to (slowly) run some of the downhill. I had lost all motivation. I didn't feel better. I just wanted to get home and watch a stupid movie. 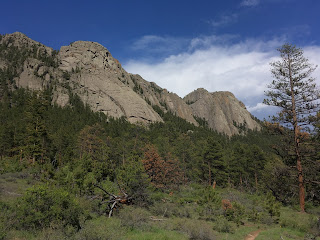 Even the normally awe inspiring sight of Lumpy Ridge didn't do it for me on this day.
I got back to the car and changed before starting the drive home. I was miserable. I felt worse than when I started. Maybe this would be my last hike ever. I'd try it once more to see if I felt better. But this could be it.
I got home and ate and watched South Park. In bed that night, my wife and I talked about our dog, and our fond memories of him. I still cried before I feel asleep, but at least that made me feel a little better.
The work week helped to get me back on track. I love my job and have some awesome coworkers, so that helps.
It's a few weeks later and I am starting to feel better. I am happy to report my hiking days are not over, as I've been out a few times since this day, and felt that indefinable "it" again, whatever it was that I was not feeling. That is great, because on this day I had serious doubts that I'd ever feel it again.
I've never really posted much in the way of times here. I think hiking is dependent on alot of variables, so my time to do something may not give you any sort of reference as to what to expect for yourself.
But I can compare myself to myself. The last time I did these two peaks together was in spring of 2014, before I had a GPS device. But my photos are time stamped, the first being taken at 541 am, about 4 miles in, and the last at 5pm with a mile left to go. My hand drawn map on Caltopo said 15.4 miles with 6200 feet of elevation gain. Though it didn't, let's say this only took me 11 hours and 21 minutes.
My last time up Mummy was from Lawn Lake Th in 2015. I did Mummy by itself, and verified by GPS, started at 503am and finished at 208am. 9 hours to go 14 miles with just at 5000 feet of gain.
According to my GPS, on this day I went 25.25 miles with 7336 feet of elevation gain in 10 hours and 14 minutes. So, I'll say I was significantly faster than my last effort, as I did 11 more miles and 2300 more feet of up in only one more hour.
Hiking and running are just as much mental as physical. This isn't the only time I've felt slow to later discover that I was moving at quite a good pace. It's just hard to focus on that out there sometimes.
And I'll love that dog forever.
Link to hike map/GPX on Caltopo.
A bad day in the mountains:
Mummy Mountain, 13425 feet: 10.7 miles, 5573 foot gain. Strenuous+.
Hagues Peak, 13570 feet: 12.5 miles, 5718 foot gain. Second class. Strenuous+.
As a whole, this day covered 25.25 miles with 7336 feet of elevation gain. Strenuous+.

Saying goodbye to a friend.